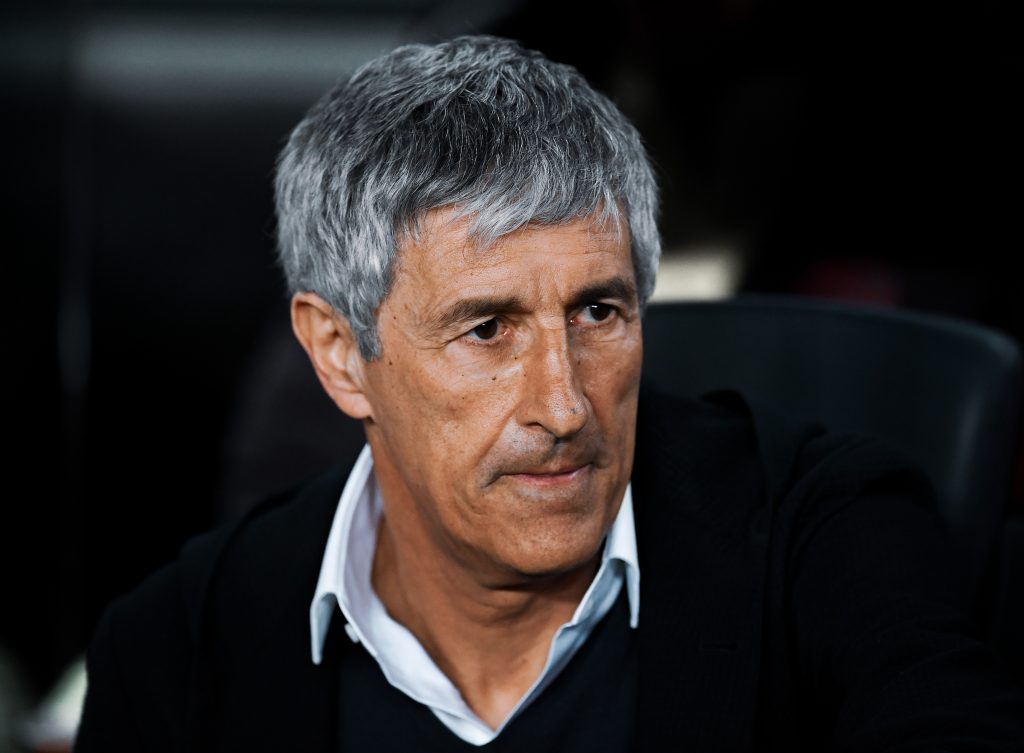 Strong rumours are suggesting that Quique Setién does not have long left at Barcelona, adding pressure to his job. The team is slowly on the right path to getting back to its best. However, there are many issues behind the scenes which include an incompetent board and too much player power.

On paper, coach Quique Setién should be perfect for the managerial position at Barcelona. A devoted Johan Cruyff enthusiast, the Cantabrian understands how the Spanish champions should play football. Since his arrival in January, Quique has started to implement his style of football in the team. Signs of improvement are there in their passing, intensity, pressing, defending and control over the game.

There has been times where creativity has been lacking, but the players must also take responsibility for this. However, Seitén’s time so far has been challenging to say the least. A clear lack of support from the board and an unwelcoming presence from the players has made the manager’s job almost impossible.

When Quique Setién was appointed Barҫa manager in January 2020, the team was in a weak state. After two embarrassing exits in the Champions League, and a final loss to Valencia in the Copa del Rey in 2019, the mentality was at an all-time low. Furthermore, the standard of football had been getting progressively worse under Ernesto Valverde. They had become lazy and spoiled with Valverde happy to keep playing the heavyweights in the team, no matter their form.

The team lacked desire. It was on its knees and things were only deteriorating. Barcelona had abandoned its principles of how to play football. They were often outplayed by rivals and suffered immensely. Even so, Valverde won two successive La Ligas. Well, did he? Lionel Messi had to continuously carry Barcelona on his back under the former Athletic Club manager. Messi produced some of his best seasons and this hid the fact that the team around him was so poor.

In recent years, mostly with Ernesto Valverde, the Barcelona squad seemed to have become more complacent | Photo by David Aliaga / Zuma via Imago

An example of this is the loss to Liverpool in the 2019 Champions League semi-finals. Leo produced an incredible first leg performance at the Camp Nou that should have seen the blaugranas progress to the final. But Barҫa could not hold out to a Liverpool team without Mohammed Salah and Roberto Firmino. The Barҫa captain created at least four clear cut chances in the second leg that his teammates could not convert. It showed the fragility of the team, both mentally and physically.

By the time Setién had been put in charge of Barcelona, the team technically sat at the top of La Liga, level on points with Real Madrid. Still, all was not well as Ernesto Valverde’s men had already dropped points against Athletic Club, Osasuna, Granada, Levante, Real Sociedad, Real Madrid and bottom-of-the-table Espanyol. This shows how poorly Barça was doing. It had completely lost that sense of invincibility and opponents knew they could get at Barҫa. Gradually worsening performances on the pitch, the azulgranas were uninspired, playing boring, slow football and dropping too many points.

In comparison, since his arrival, Quique Setién has dropped points against Valencia, Real Madrid, Sevilla, Celta de Vigo and Atlético de Madrid – much tougher opponents. It should also be noted that Real Madrid have had a significantly better second half to the campaign and that the league is still alive. It takes time for a coach to implement its style and system, so it is still too early to fairly judge Quique Setién.

Moreover, the long break from football, due to COVID–19, interrupted the season and footballers lost some of their match sharpness. One critique of Quique could rightfully be his line-ups and late substitutions. Nonetheless, he could learn from these mistakes and how to get the best out of his players. Also, there are other influences that are forcing him to make these decisions, such as player power and the board.

What has Quique Setién improved?

One of the main statistical improvements that Setién has made is a higher points per game record than Valverde, for this term. He has also improved on the defensive side by conceding less goals per 90 minutes. On the other hand, the team has not created as much as they did with Valverde.

A number of players have also become better under Quique Setién so far. The midfield has seen a huge improvement, in particular Sergio Busquets and Iván Rakitić. Riqui Puig too has emerged under Setién and started putting in impressive displays. Most of the defenders have improved as well and are a lot more comfortable playing the ball out from the back.

The improvement in several areas of the game with Quique Setién, especially considering the circumstances, must not be overlooked | Photo by Filippo Monteforte / AFP via Getty Images

The general play of the team is far better with Barcelona able to control the game for extended periods of time. The passing is much sharper and there is much more intensity in the pressing. The team also exhibited more creativity against Celta, which shows an evolution and players understanding the instructions better.

Additionally, the team selection helped in that game, with Riqui Puig adding more creativity to the midfield and Ansu Fati offering the pace and width. It must be pointed out too that Quique has not had such a clinical Lionel Messi for a number of weeks now. In the Athletic and Celta fixtures, the Argentine had 14 shots with none of them on target. His penalty against Atlético de Madrid last night was his first goal in over three matches, a long time for his standards. Still, Leo has been creating most of the goals for Barça.

Player power and the board

The comments made by Luis Suárez on the poor away form being down to the manager shows a clear lack of respect. His recent performances give him no right to question the manager either. Let’s not forget that El Pistolero has not scored away from home in the Champions League since 2015. He supported Ernesto Valverde for a number of years after poor away performances, especially in the Champions League. But after a draw to Celta, in which Barҫa should have won, now he believes it is the time to publicly question the manager.

“I think that’s what the coaches are for, to analyse these situations. We are the ones that have to give out all on the pitch. Away from home, we’re dropping points that we don’t usually do in other seasons”

It undermines the coach and sends negative signals to the dressing room. It has to be wondered what support from the dressing room Quique Setién ever had. His intensive training sessions were rumoured to cause some players to be unhappy after such an easy time under Valverde. It seems that some of the players were never in favour of Quique’s appointment.

The board too are looking for another scapegoat as Barҫa continue to struggle. Every culé knows that this board are the root of the problems at the club. But they are looking to pass the blame for recent failings on to the coach. They hired Setién to try and bring back Johan Cruyff’s football, and if it fails, they can shift the blame on that. Again, it has to be questioned what support Setién actually has from the board. The team is not particularly strong and selling Arthur Melo to Juventus midway through the season will only lower the focus.

The beautiful game is being taken away from the Camp Nou and replaced with the business game. The club is following a number of other declining European giants in being run for financial reasons and not footballing ones. Though Quique Setién is not perfect, he is taking the club slowly back in the right direction with the style of football.

Yes, he has made mistakes with some substitutions and line-ups, but he can learn from these. He is still a new manager trying to implement his style and finding the best team possible. In addition, he seems to be influenced to play certain footballers by the dressing room and the board. If rumours are true that he has lost the dressing room, though, then there is not much hope in him recovering from this.

The board hired a Cruyffist coach, but can the team play that way? Are key players willing to work harder to achieve that standard of football? It is no surprise that when younger La Masía players have been given a chance, they have shined. They are accustomed to, and willing to, play that system. The likes of Sergio Busquets have improved too as this system suits their style of play.

Nevertheless, others seem more than happy on delivering sub-standard performances and still collecting their extortionate pay checks at the end of the week. Maybe Setién is not right for the Barcelona job, but he was never given a fair chance. The expression never meet your heroes has never been truer for Quique Setién.

• Is a change of coach really the solution to the situation at Barcelona?