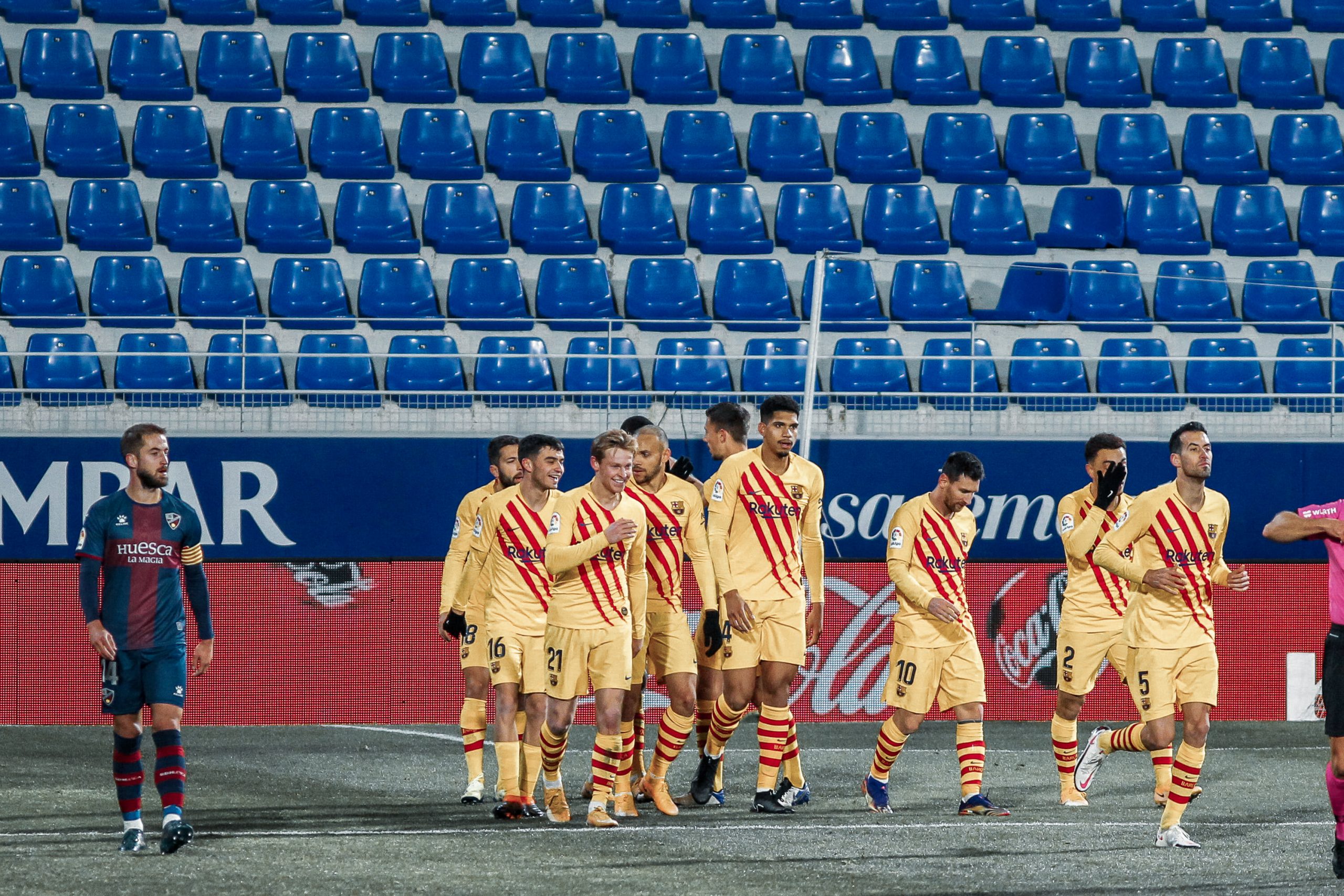 Barcelona could not have made a bigger mess of a game against the lowest placed team in La Liga. On the start of what is an extended away tour, the Catalans dominated the hosts. So much so, that Huesca recorded an xG of 0.0 at the end of the first period.

Barcelona pressed relentlessly, covering inch after inch of turf with the same determination as they had in the opening minute. As one would expect from the Catalans, they dominated the possession and the proceedings. However, it still boiled down to the same nervy ten-minute spell in the dying minutes when they had to defend a one-goal lead.

The performance was impressive, yet lacked the final product. Chance after chance came the way of Ronald Koeman’s side, as they colossally failed to find the back of the net at every juncture. There were positives and their equivalent share of negatives in a sweet-sour outing for the side in yellow and red. Barça Universal brings to you the player ratings from Barcelona vs Huesca.

It’s often how we react under the most sudden challenges that define our greatness. On Sunday night, ter Stegen found himself in one of the same. A horribly misplaced backpass from Sergio Busquets found the German shot-stopper in a tricky situation. The aerial backpass was well above the goalkeepers head and en route to being an own goal.

Yet, despite not being able to use his hands, ter Stegen stayed calm and composed to display his immense awareness of the ball, and prevented what would have been an unfair equalizer. Besides, three saves from inside the box in the second period is a good enough performance for a goalkeeper on any day.

It was a night where defenders did not have much to do, with Huesca hardly threatening any counter-play. Lenglet only had to make the one interception in the 90 minutes of the game. Nevertheless, his passing range was spot on, and the Frenchman recorded two key passes to cap off a solid performance

A quiet night at work for Araujo, in a game that was practically a defensive day off. Yet, the Uruguayan was calm on the rare occasion that Huesca attacked. He was more involved in defence than his partner with three clearances, two interceptions and two tackles. Araujo seems to have put the horrors of Eibar behind him, and that can only be a good thing.

On a night when Dest literally had to make zero defensive contributions, one would have expected the American to unleash his ruthless form going forward. However, the right-back has a passive outing, with nothing solid to offer going front.

He did not put any step wrong, but he could have put many more steps right. Oscar Mingueza eventually replaced him in the 75th minute.

Jordi Alba had a considerably better outing going forward when compared to his fellow full-back. The Spaniard recorded three key passes on the night and was a constant threat combining with Ousmane Dembele. Like the other defenders, he didn’t have much of a role at the back-half of the field.

The difference-maker in the game. De Jong was the only man who could direct the ball into the net amidst the volley of chances that Barcelona saw. His perfectly timed run complemented by his spatial awareness and silky smooth touch saw the Catalans run away with all three points.

Apart from the goal too, the #21 had a decent game. He combined well with Sergio Busquets and Lionel Messi and dictated the overall flow of the game.

Having a game without much defensive trouble could have been the best thing to happen to Sergio’s morale. The absence of defensive duties helped his free up his play and involve more players in the buildup. He finished the game with over 95% pass accuracy

Two massive chances in the opening period, both missed. Pedri had a real shot of being the hero of The game once again, but couldn’t capitalize. However, it was a night when all four forwards failed to capitalize on their chances, and singling out the youngster would be unjustified. That said, his dribbling and positional play were on point. The Messi-Pedri connection continues to grow.

Messi had a rather frustrating day, yet heavily impactful at the same time. Struggles in front of goal continue to haunt the Argentine, but don’t hinder him from inspiring the team. In the end, it boiled down to his gorgeous ball through to de Jong that fetched the visitors the win.

Dembele was Barcelona’s most lethal threat going forward and by quite a distance. His blistering pace and smooth dribbling left Michel with no answers. The French winger had three shots on goal, all saved by Alvaro Fernandez. It was Dembele that set up the initial chance that was squandered by Pedri too. If anything, this was a reiteration of the importance of a winger in this team.

Starting as the centre-forward and finishing the game with zero shots is just a nightmare for a striker. Braithwaite continuously tried to get involved, however, just couldn’t find his rhythm. The Dane barely offered any cutting-edge going forward, and his presence was not even felt later in the game.

Miralem Pjanic replaced Busquets in the closing 15 minutes of the game. It wasn’t enough time for the Bosnian to impress. However, Pjanic did not make any mistakes and continued to carry on the role that Busquets played during the game.

Coming on for an ineffective Mertin Braithwaite, Griezmann did not offer a whole lot more. In his ten minutes of play, he saw just four touches with nothing solid created.

Sergino Dest has been overburdened in the last month and using Mingueza as a back-up was always on the cards. The experiment paid off decently, as the La Masia graduate did not seem to struggle overtly in a new position.