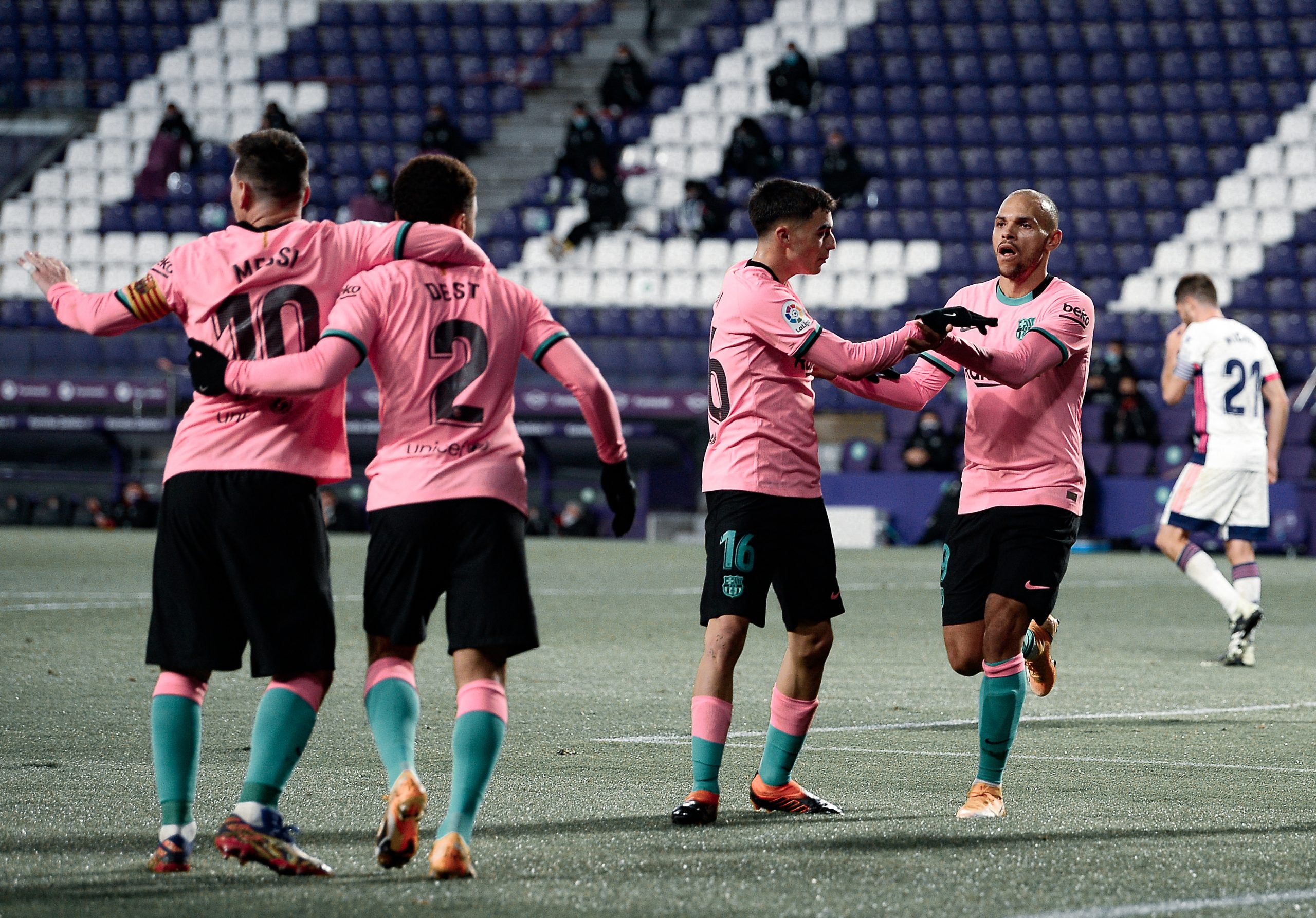 Barcelona visited Real Valladolid in the hope to get back to winning ways after an underwhelming 2-2 draw against Valencia on the weekend. Even though Valladolid were stuck in the relegation zone, it was hard to expect much from the game, especially when the lineup was announced.

Ronald Koeman fielded a 3-4-2-1, proving he is capable of change. He used the menacing pace of Sergino Dest and Jordi Alba to provide width and the genius of Lionel Messi and Pedri to find space in the middle of the park. It worked wonders for the team as they put in a very complete performance, even at the back, with each player coming up clutch, all en-route a 0-3 win.

With a dominant victory at the Jose Zorilla securing three vital points for the men in pastel pink, Barcelona must now prepare for a daunting opposition at the Camp Nou as Koeman’s side await Eibar after a momentary hiatus.

A well-deserved clean-sheet for Marc-Andre ter Stegen, who had a relatively comfortable night between the sticks. Barcelona’s defence was rarely tested, and this enabled the German wall to get a bird’s eye view of the game as it panned out in Valladolid’s half for a majority of the game.

However, ter Stegen made a remarkable one-handed side in the game’s dying moments, denying Orellana from ruining the Blaugranas’ hard-earned clean sheet.

Mingueza made up for his underwhelming exhibition against Valencia with a top-notch display at the heart of the defence. Real Valladolid’s forwards were kept at bay effectively by the prodigious centre-back as he won most of his duels and distributed the ball precisely. Operating in a three-man back-line proved to be a walk in the park for young Oscar.

A solid outing for the Uruguayan centre-back, but truth be told, Ronald Araújo was arguably the most minimally tested player on the field. With the inclusion of an additional centre-back, Araújo for large portions of the game was tasked to close down spaces and provide support to his partners at the back through his positioning. However, he distributed the ball well and enjoyed a cozy night at the Jose Zorilla.

A clean sheet, topped off by a well-placed header – Clement Lenglet showed signs of improvement after stringing a few disastrous performances in defence. The Frenchman was reliable in the possession and anticipated the threat adeptly. A fitting tribute for Moussa Wague – who suffered a career-threatening injury – after giving his side the lead was undoubtedly a heartwarming gesture.

Functioning as a wing-back brought the best out of Barcelona’s marauding speed demon. Sergiño Dest pierced through Valladolid’s rigid back-line effectively as Nacho Martinez was left chasing shadows. Dest was rewarded with an assist in the 35th minute of the game after barraging in several crosses and creating chance after chance. A flawless exhibition from the bright youngster.

After complaining about lack of minutes on the field, Miralem Pjanic walked the talk against Real Valladolid, proving why he is more than worthy of starting games more often. Retaining the ball in tight areas, displaying short link up passing and looking for diagonal passes frequently was a sight for sore eyes, given how Barça have been deprived of a player this dynamic for so long. Busquets’ position is gradually being put in jeopardy with the Bosnian injecting flair and composure in midfield.

Frenkie de Jong has finally found his mojo again, reminiscent of his days at Ajax. De Jong was incredibly resistant in pressure situations and weaved his way out with immense delicacy. The Dutchman dictated the flow of the game seamlessly and also played a key role in the build-up for the third goal. De Jong’s tenacity to thrive in a system where free-flowing football is visible is second to none.

In contrast to his full-back partner – Sergiño Dest – Jordi Alba floundered cheaply as he attempted to burst up-field. Frequently attempting to find the predictable “Alba-Messi cut-back” allowed Valladolid to counter his threat. Nevertheless, Jordi Alba was considerably active in the final third and played a huge role in stretching the opposition’s rigid low block. Not having to worry about his defensive duties upraised his display.

The Argentine talisman arguably had his most influential game on the road this season, with beautifully timed combinations along Pedri and a hand in almost every attack Barcelona initiated. Leo was unlucky to have Jordi Masip channel his inner Gigi Buffon as the former Barça goalkeeper was a force to reckon with between the sticks, but nonetheless, the number 10 provided an inch-perfect assist for Clement Lenglet and also inscribed his name on the score-sheet to break Pele’s record for most goals at a single club.

Lionel Messi is back in the La Liga top-scorers race. pic.twitter.com/c7B0zMjWy1

When Messi is offered mobility, does not frequently clash with various number 10s on the field, and most importantly, is finding a smile again, his abilities are utterly unmatched.

Pedri oozed quality, he illuminated the pitch with his sheer presence and produced a performance worthy of endless plaudits. The youngster’s distinction between the lines saw him link up marvellously with his partners in crime. Slipping into spaces silently and dealing killer blows with his silkiness on the ball, Pedri almost made it seem like he had earned a masters degree at the La Masia academy.

An awe-inspiring back-heel to Messi which saw the number 10 score was a testament that this young kid is a gem that must be preserved for years to come.

The Barcelona number 9 was, at long last, handed the opportunity to feature in his preferred position up front and the Dane forward made the most of his time as a classic number 9. Martin Braithwaite manipulated centre-backs effortlessly and eventually scored a proficient poacher’s goal from a sublime Dest cut-back. The former Lega man’s work rate enabled him to add a different dimension to the Catalans’ gameplay.