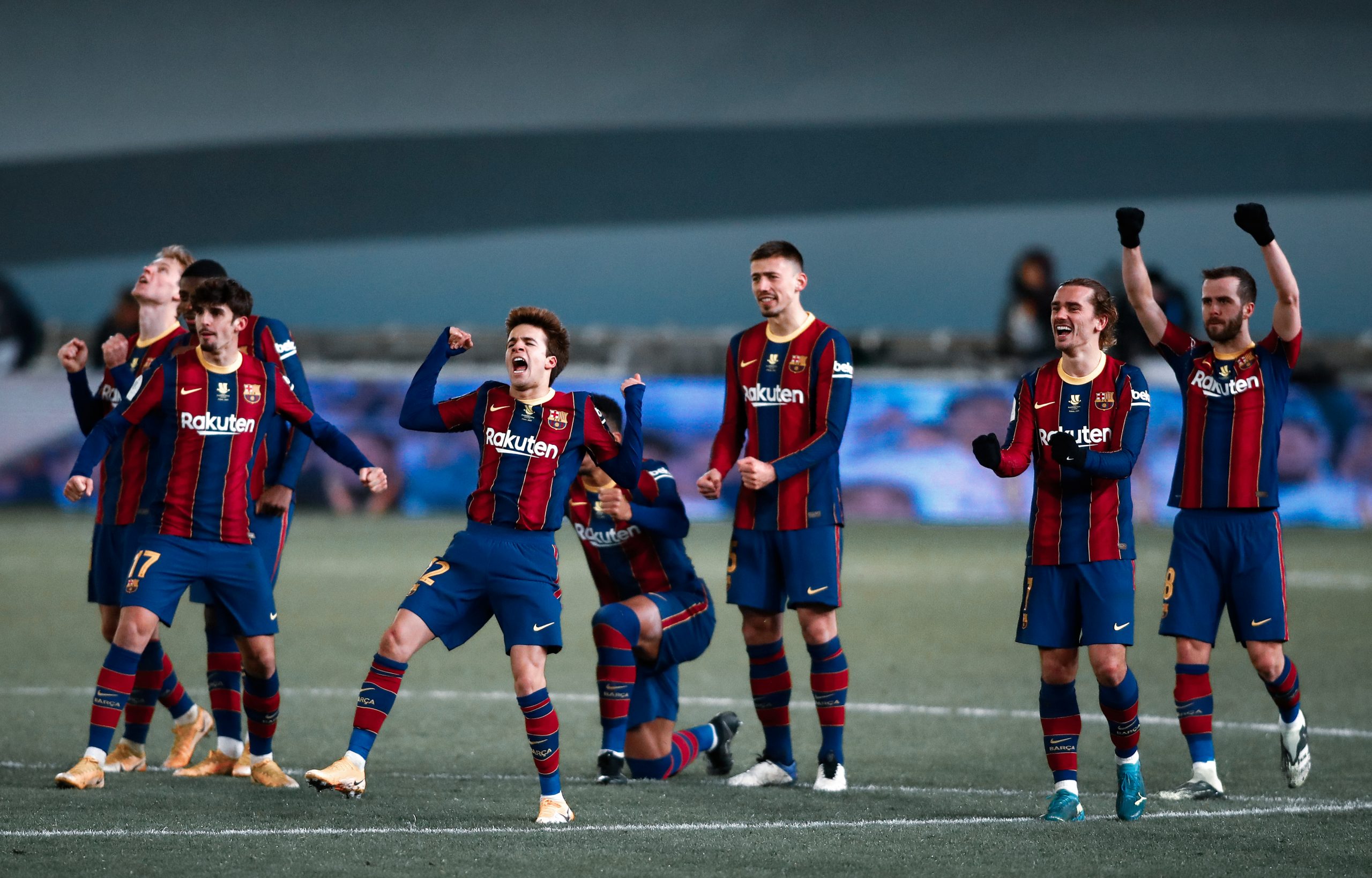 Through to the finals!

Barcelona and Real Sociedad met at neutral territory to fight it out for a spot in the Spanish Super Cup finals. After a promising start from Antoine Griezmann and Frenkie de Jong saw Barcelona lead 1-0 as the game headed into the second 45.

La Real started the second half the way Barcelona ended the first, earning a penalty after five minutes of rewarding attacking moves. De Jong’s handball meant that Mikel Oyarzabal had the chance to equalise from the spot and made no mistakes with it.

The game headed into a penalty shootout – Barcelona’s first in this century, but a Marc-Andre Ter Stegen masterclass was enough to deny two spot-kicks and consequentially book a spot in the finals.

Some heroes don’t wear capes; they wear goalkeeper gloves. The German wall made some impeccable saves, denying Sociedad from scoring on innumerable occasions during the game. However, his heroics during the penalty shootout is what truly stole the show.

With all eyes pierced on Ter Stegen, he stepped up and reigned supreme between the sticks, making save after save to deny La Real’s elite forwards from finding the back of the net. An extraordinary exhibition for an extraordinary player.

Adapting to unfamiliar domain, Mingueza did moderately well to replace Sergiño Dest. The La Masia pearl maintained remarkable composure at the back and bursted up-field frequently, holding his own in both departments. While he slightly struggled against the fresh legs of Barrenetxea, the Spaniard was a reliable figure on the field, winning 6 out of 12 ground duels and providing a few well timed crosses.

Another day, another masterclass from the Uruguyan prodigy. Standing tall with the sense of conviction on his face, Araújo dismantled the opposition’s attacks seamlessly. He successfully neutralized Isak and Oyarzabal’s threat for large portions of the game and one of his biggest virtues proved to be his flawless positioning in transitions.

Clement Lenglet struggled in the air, with Real Sociedad troubling the Frenchman through their crosses. However, he was rather mature with his positioning and managed to win 4 out of 8 ground duels as well as distribute the wall with precision.

The marauding speedster proved to be quite ineffective in the final third with his usual partner in crime, Lionel Messi, missing. Although in the defensive third Alba was minimally tested, he dealt well with Portu and gradually kept him at bay.

The veteran’s imposing performances in the single pivot role have added a great deal of stability to the side over the past few games. Busquets was cheaply dispossessed on a few occasions, but constructed plays productively from the base of midfield. The Spaniard even won a whopping 10 out of 15 ground duels, proving to be as effective as ever in the defensive third.

De Jong had a prominent performance as a box-to-box midfielder, rushing forward with flair as well as combining smoothly his partners in crime. The Dutchman subsequently scored a peach of a header in the first half, giving his side a much needed lead.

However, despite a promising outing, Frenkie’s performance was slightly blemished due to his error leading to La Real capitalizing on a penalty and also missing one in the shootout.

Without Lionel Messi complementing the youngster’s movements on the field, Pedri looked relatively isolated on the pitch. He struggled to make the most of possession at times. Still, Pedri ended up providing a key pass  and had a few good spells when he dropped deep to pick up the ball.

Waltzing down the right flank with flair and panache, Dembélé was a nightmare for Nacho Monreal. Albeit the Frenchman gave away possession in underwhelming fashion on various occasions due to his rusty touch, his explosive profile helped the club pin La Real’s defence back frequently. In addition, he even scored a penalty for his side in the shootout.

Griezmann failed to replicate Lionel Messi’s role as a false 9 and was not a creative presence between the lines. Dropping deep habitually to facilitate the build-ups, the Frenchman played a rather supportive cameo. Despite his minuscule impact and cheap penalty miss, he did, however, hand an excellently timed assist towards De Jong, who finished it off with a gliding header.

Martin Braithwaite was largely responsible for the Blaugranas‘ opening goal as he sent in an incisive ball to Griezmann, but the Danish forward hardly had an impact in the final third, struggling to influence the game from the wider areas of the field.