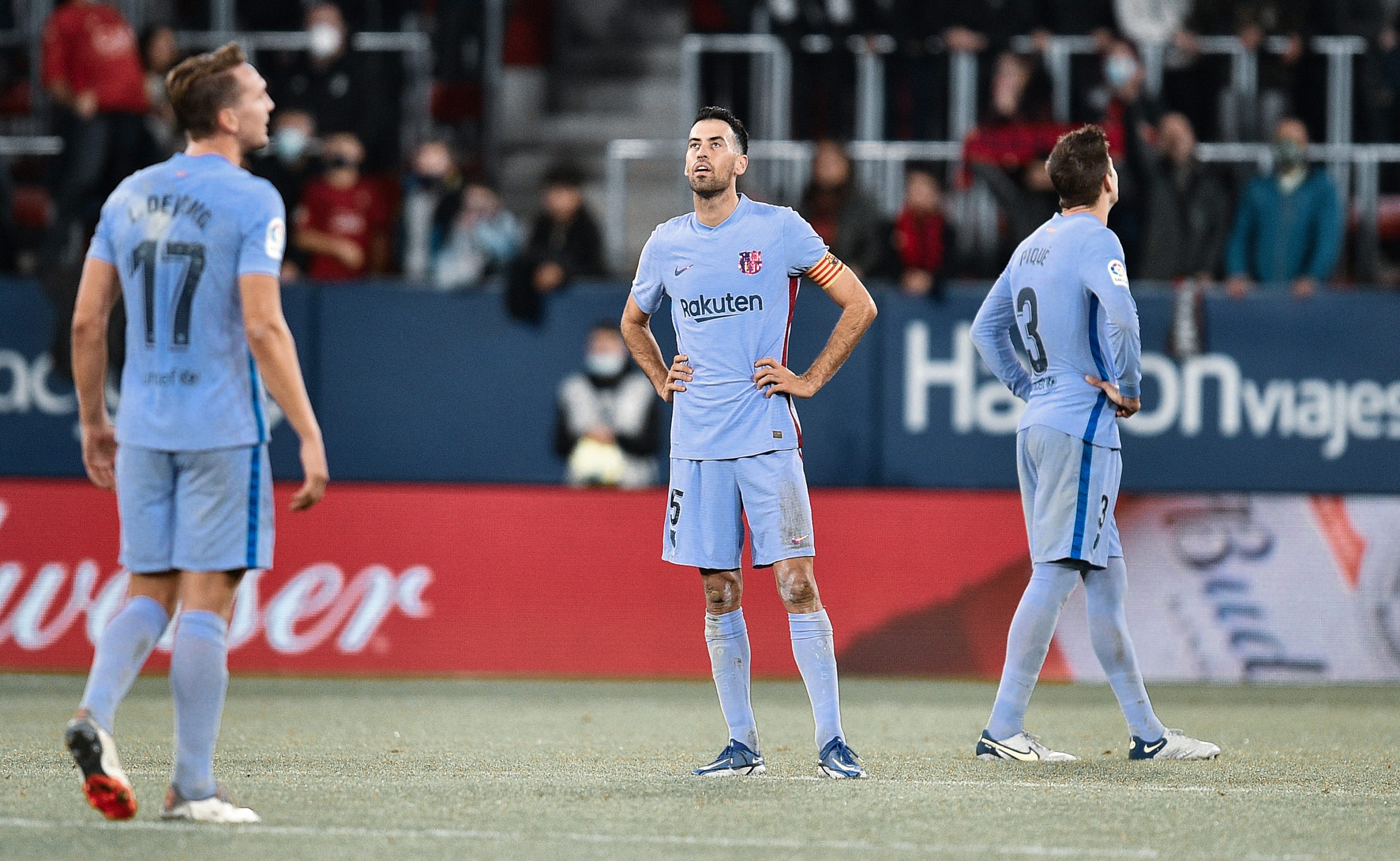 Barcelona are marred with injuries, with solutions scarce. With neither of four first-choice strikers available in Ansu Fati, Memphis Depay, Sergio Aguero, and Martin Braithwaite, Xavi was faced with the pressure to innovate.

He decided to field what looked to be a very Marcelo Bielsa-style 3-3-1-3. Frenkie de Jong sat in that free role behind the attacking trident, while Gavi and Nico were asked to act as midfielders-cum-wingbacks, flanking Sergio Busquets.

It was a torrid affair for the players but far from entertaining for the fans. The ball continued to shuffle its way in central zones for most of the game, with awful passing headlining the proceeding.

There were a few standout performances on an individual level, but as a team, Barça were outright mediocre. Xavi, too, boasted of horrible in-game management and was primarily responsible for the draw because of poor substitutions. That said, Barça Universal takes the chance to judge those in garnet and blue.

Osasuna had three goals on target, and ter Stegen let two of them bulge the back of the net. While he cannot be held responsible for the two goals Barça conceded, there is a serious conversation that needs to be held about his late reactions. Made two clearances, but barely anything special to talk about.

Barcelona’s most reliable defender, Ronald Araujo, did all he could tonight from stopping Osasuna in their tracks. He was not dribbled past a single time and kept Manuel Sanchez quiet through the 90.

A gigantic performance from Pique, who got some unfair criticism for the game against Bayern Munich. He made nine clearances, six interceptions, one tackle, and blocked two shots. Inarguably the best among those wearing lilac.

Umtiti started his first game for Barcelona since the end of April and did almost every right. He was beaten on just one occasion, during the latter stages of the game, but made several excellent tackles before that. Completed 5/5 of his long passes and came close to scoring in the first half.

After a string of excellent performances, fan-favourite Nico has finally registered his name on the scoresheet. The Spaniard made an excellent third-man run to open the scoring and was a solid presence in midfield after that. The midfield lost its grit as soon as he was subbed off.

A clever pass here and there, but a lot less than what we have come to expect from Busquets. Was beaten several times in the midfield and could not keep up with the chaos.

Barcelona have a gem on their hands with Gavi, and today was another game he proved that.

The teenager was brilliant on the ball, assisting Barcelona’s opener and continually finding unmarked players. Off it, he was as ruthless as ever, picking up five fouls (including a yellow that should have never been).

The Barcelona upper management was reportedly worried about Frenkie de Jong’s morale. We saw shades of the same tonight, as the Dutchman put in arguably his worst performance of the season. Nothing went right for him, offensively or defensively.

Dembele’s unparalleled pace is a massive asset for Barcelona, and we could see that today. But often, his decision making comes in the way of what could be a world-class player. The Frenchman took three poor shots, completed only one cross, and won zero fouls.

He did, however, create the second goal for Barcelona through a deflected cross. Was also crucial in the defensive third, making three tackles. Got injured, though. Surprise surprise.

Luuk de Jong created more chances than Frenkie de Jong today. It was that kind of game. He was also key in the opening goal, pulling away a defender to give Nico space. Also made four clearances from set-pieces today, while winning one tackle.

Ez Abde on the wings is a menace for any defence. He was ruthless in possession today, especially in the first half when he dribbled past the entire Osasuna backline and made two players fall. He also won four free kicks, one of which almost found the net.

Came up clutch late in the second half with a goal courtesy of a well-thought out run. Should be starting regularly from here.

The series of baffling substitutions started with Oscar Mingueza coming on for Nico. He filled in at left-back and was much better than his recent cameos.

Touched the ball nine times in nine minutes, one of which was a horrible cross to Ferran Jutgla.

Came on too late to make a proper difference. Still managed to create one chance, though.