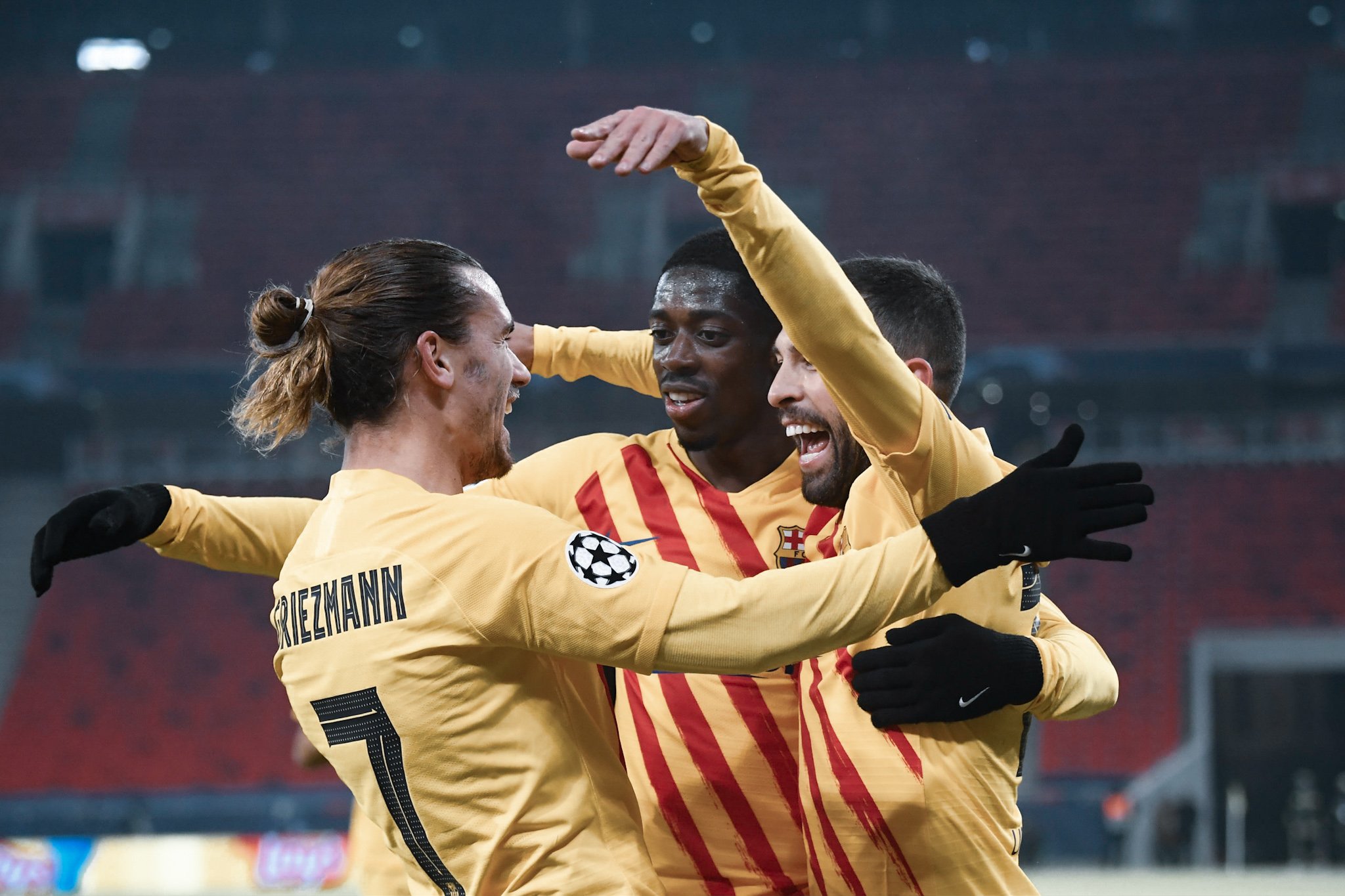 As Barcelona travelled to Budapest, they went with the intention of maintaining their 100% win record in the UEFA Champions League this season. It was a cold night at the Puskás Arena, but this did not stop the Spanish giants from playing some entertaining football.

Ronald Koeman rested several key players, and for the third game in a row, made several rotations. These rotations are doing wonders for the team’s performance and morale. Fringe players are receiving game time, and regulars are getting some necessary rest. There is a competitive nature to the squad as everyone fights to earn a starting role in the team.

It was a comfortable first-half for Barcelona as the visitors outclassed their opponents. Barça’s left-wing, of Jordi Alba and Ousmane Dembélé, caused Ferencváros many problems, with both players registering an assist on the night. Martin Braithwaite continued his goal-scoring run, and Antoine Griezmann is regaining his confidence. The double-pivot shielded the defence, and the home side rarely threatened the Catalan’s goal.

After half-time, the levels started to drop as the win became increasingly secure. The manager made all of his available substitutions as he looked to freshen things up. Complacency began to creep in, and sometimes the simple option was ignored. However, Koeman should be delighted with the performance and the current form of the squad.

The Brazilian goalkeeper returned to the starting line-up after a string of convincing performances at the beginning of the campaign. Neto was relatively untested throughout the match as Ferencvaros struggled to create many chances. When the goalkeeper was called into action, he was alert and sharp to react.

Sergiño Dest continues to impress since his move in the latest transfer window from Ajax. The right-back possesses an abundance of potential and ability. He is excellent with the ball at his feet and can receive it in any position on the field.

Dest can do it all. (Photo by David Ramos/Getty Images)

On Wednesday evening, Dest proved his quality once again with another exciting performance. The right-back constantly pushed forward and took defenders on. Even though he is attack-minded, the American international never seems to be caught out of position. The area that he could still improve on is his delivery into the box as his crosses do not find a teammate enough.

In a time of crisis, La Masia has saved Barcelona once again. This time it comes in the form of Óscar Mingueza. As the club only had one fit centre-back, the B team player has filled this position and shown he is ready to play at this level. The fixture in Budapest is now his third appearance with the first team, and he has been sensational in each of them.

Against Ferencváros, the 21-year-old had a quieter evening as the side from Hungary struggled to create in the final third. The Spanish centre-back is energetic and athletic whilst still being calm and composed. He was one of the few Barça players that maintained their intensity throughout the full 90 minutes.

After limping off the field on Sunday, Clément Lenglet managed to recover in time for the UEFA Champions League tie midweek. The Frenchman had his usual solid performance and remained focused during his time on the pitch. His range of passing was, again, a huge asset to the team. For clubs that like to build play from the back, having a left-footed centre-back is a huge asset in breaking the press and progressing the team up the field.

Jordi Alba has recovered his best form this campaign, especially going forward. The full-back added another assist for the season and was relentless in his attacking runs. He combined well with Ousmane Dembélé for the first goal after exchanging a couple of passes and eventually crossing the ball, allowing Antoine Griezmann to score.

He was taken off at half-time by the manager, probably just to rest him. However, the veteran defender has been one of the most important players for the club this season. His overlapping runs always provide an option for his teammates and pin back the opposition.

Sergio Busquets began the match with the captain’s armband. However, he did not produce one of his better displays. He controlled the game well and did what a pivot should, but was clumsy in several challenges. This saw him booked and then he committed another risky foul not long after this, which possibly resulted in him coming off in the second half.

The classy performances from the midfielder seem too few and far between these days. Either a lack of concentration or complacency seems to be the answer. At times, the Spaniard still reads the game expertly, but he is prone to lapses of concentration and some loose passes now.

The Bosnian put in another dominant performance as he ran the midfield from start to finish. Miralem Pjanić completed 124 passes in total with a 94% pass completion rate. Whenever he plays, Barcelona seem to retain possession better and distribute the ball more efficiently. The former Juventus player is one of the best passers around and showed this with an outstanding first time outside of the boot pass over the opposition defence that found a teammate perfectly.

A stunning pass from the Bosnian playmaker, Miralem Pjanic! https://t.co/0pBibeWXZD

Where Pjanić could improve is in his defensive contribution. He does not offer as much protection as some of his midfield counterparts. This is an important aspect of being a double pivot and could be why he is not an undisputed starter yet.

It was a strange evening for Francisco Trincão. There were a lot of mistakes in his performance, but a lot of promise too. He drifted inside and moved into the central areas more than usual. This is likely to be what the manager asked of him as he played the full 90 minutes.

The 20-year-old is still adapting to Barcelona and still developing. He will learn a lot from these mistakes, which is probably why Ronald Koeman left him on for the full game, even though Trincão was clearly exhausted. The Portuguese talent needs some fine-tuning but has all the right attributes to succeed at the club. He is intelligent and technically excellent on the ball.

Antoine Griezmann has certainly been enjoying himself more in recent matches. He has been improving for some time now. There were some games where the forward was missing too many chances, but he was doing well to get himself into these positions. Now, the goals seem to be coming too, and the best version of the World Cup is re-emerging.

Antoine Griezmann is returning to his best, slowly but surely. (Photo by Attila KISBENEDEK / AFP)

He showed a lot of confidence for his goal against Ferencváros, where he flicked it between the goalkeeper’s legs. The Frenchman continued the game in fine form, playing with a lot of freedom and linking with his teammates. Griezmann wanted the ball and wanted to be involved in the play. Being in his favoured position and having a natural number 9 ahead of him is definitely the key to getting the best out of the former Atlético Madrid star.

Possibly the Frenchman’s best performance of the season, Ousmane Dembélé was almost at his mesmerising ceiling against the Budapest outfit. For starters, he is minimising how many times he gives possession away cheaply. Furthermore, he is becoming more productive in the final third and working hard to press his opponents. He produced a few solo efforts that went just wide and turned the defenders inside out.

In the second period, Dembélé was given the captaincy after some substitutions were made. This was the perfect moment as his performance was filled with maturity. The winger needs regular game time to continue to improve and be at his best. Having a match fit Dembélé could be key if Barcelona are going to win trophies this season.

The Dane has become a vital part of the Blaugrana set-up. He allowed others to play with freedom and created space for them with his movement and by keeping the opposition defenders occupied. In his last three starts, the Spanish giants have scored 11 goals, with Braithwaite featuring heavily in around half of them. Though the striker might not always make the headlines, he is proving to be an important part of the squad.

Riqui Puig was given just over 25 minutes on Wednesday evening to impress. The La Masia graduate was asked to play in a more attacking role. The Spaniard did this well and played with his usual quality on the ball and enthusiasm. He pressed well and won the ball high up the pitch on one occasion. This allowed him to run through on goal and he passed it to Ousmane Dembélé, leaving him 1 on 1 with the goalkeeper, but for some reason, he tried to return it to Puig.

The young midfielder needs more game time from the manager to get to his best level and to keep developing and learning. The talent is there, he just needs the experience and he could become a world-class player for Barcelona.

Carles Aleñá was introduced at the same time as Riqui Puig. His role was different as he was instructed to be one of the double pivots. Aleñá seems to enjoy this role, and his distribution of the ball has been almost perfect when he has played there. The 22-year-old is the ideal Barcelona midfielder and looks to be winning Ronald Koeman’s trust with every opportunity he is given.