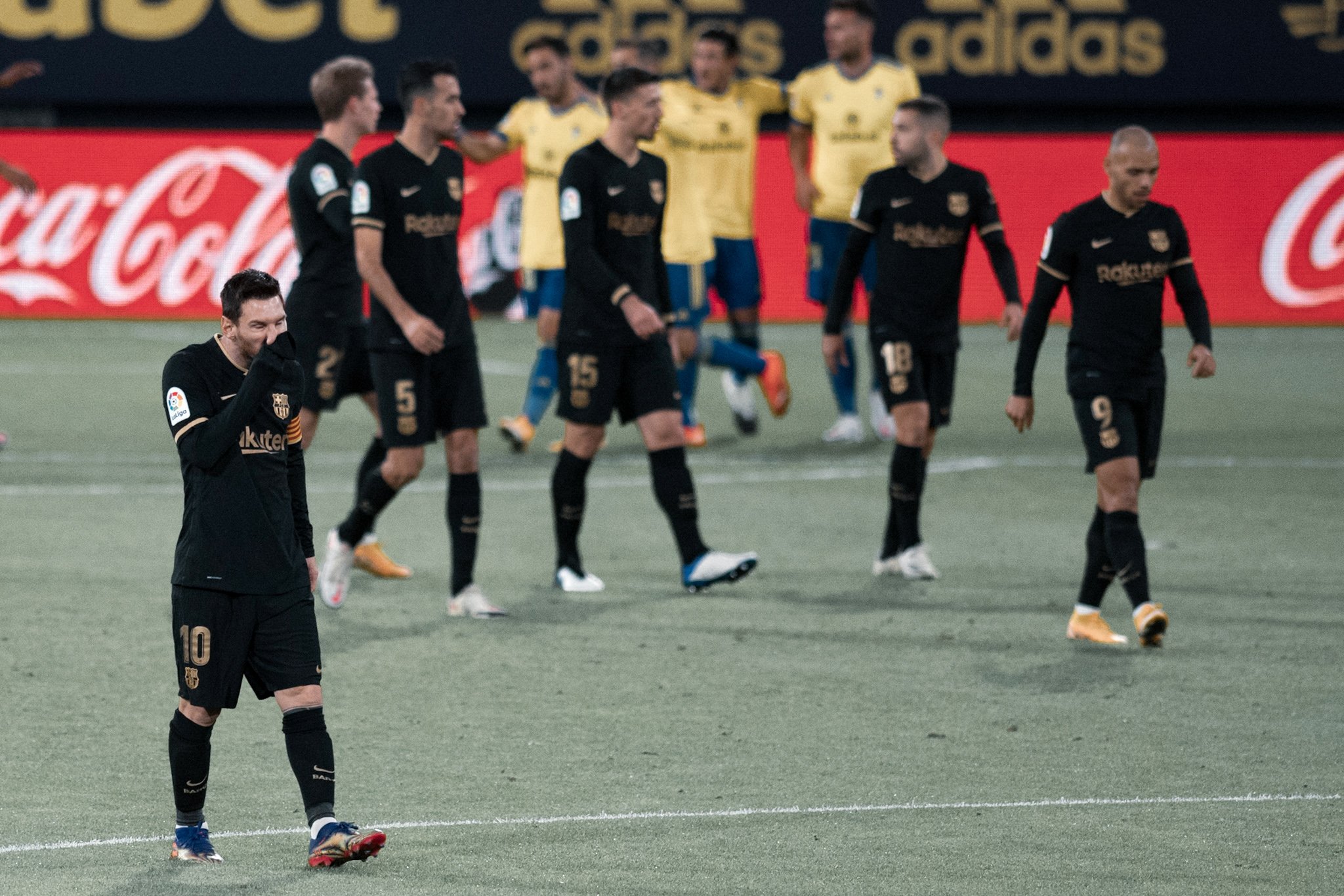 Christmas came early for Cádiz as the Spanish side retrieved a 2-1 victory over an in-form Barcelona side.

Ronald Koeman deserves all the plaudits for his effective rotation and man management, but his sheer stubbornness to realize that substituting offensive players at the cost of defenders doesn’t translate to an increase in attacking output cost the visitors gravely. So far, his lack of pragmaticism and creativity has cost the team too much, throwing them out of the title race.

Repeatedly misbalancing the team’s structure by employing players out of position – Frenkie de Jong at centre-back, Fransisco Trincão at right-back, Pedri in a pivot – is just asking for an unorganized layout; and this proved to be the case yet again against the newly-promoted side.

Cádiz capitalized on Barça’s errors tactfully. With the Blaugranas‘ errors allowing oppositions to sit back, relax and watch them look like a chaotic mess in search of a goal as they scurry around like headless chickens, an embarrassing loss embraced them at the full-time whistle.

After enjoying a mid-week rest against Ferencvarós, Ter Stegen was marred with a loss on his return to the XI as Cádiz slotted two sloppy goals past the German shot-stopper.

Ter Stegen, albeit was promising in his distribution and released the ball accurately, was slightly at fault for the second goal considering he failed to clear the ball away, which led to the hosts feasting on an open net. By no means was the German at fault for the loss, but he was far from his brilliant best.

Filling in for the injured Sergi Roberto, Dest continued his flawless form at right-back as he entirely owned his respective flank, raiding up-field like a roadrunner and tracking back continuously to deny the danger. While the American sensation sent in a few well-worked crosses – worthy of finding a better outcome –, he also had a howler in front of goal on one occasion.

As he entered a one-versus-one situation with the keeper after proceedings, Dest struck the ball wide cheaply. Regardless of his poor attempt at goal, the former Ajax star compensated Messi’s absence effectively on the right-hand side and displayed some appreciable link-up plays with the Argentine.

Mingueza’s inexperience on the road appeared to have cost the Blaugranas severely in the first half. The La Masia prodigy has produced a few exceptional performances with the first team thus far. Still, a calamitous error inside his box enabled Alvaro to score one of the easiest goals of his career.

Mingueza was probably wishing for the earth could open up and swallow him whole. (Photo via Imago)

Oscar in a desperate attempt to clear the ball away headed it right at Ter Stegen, who parried it away straight towards the goalscorer. In addition to being responsible for the opener, the Spaniard struggled to distribute the ball as he frequently found himself misplacing passes. As a consequence of his error, the youngster was strangely brought off at half-time with the make-shift centre-back, Frenkie De Jong, replacing him.

Taking inspiration from his partner in crime, Lenglet was equally accountable for the Blaugranas‘ 2-1 loss with an outrageous blunder after proceedings gifting Negredo a goal handed on a silver platter.

The Frenchman struggled to win most of his duels, looked positionally out of touch and eventually degraded his mediocre display with an unforgivable error. Lenglet has proven to constantly waver without Piqué’s commanding presence glueing the back-line and the game against Cádiz was certainly a prime example.

Jordi Alba’s strong string of performances also seemed to have come to an abrupt end. The Spaniard always sought to add width on the flanks and stretch the opposition, but was far too vulnerable defensively and incapable of opening up Cádiz’s rigid back-line.

In spite of maintaining some solid link-up plays with the front-line as well as being partially responsible for the Catalans’ only goal, an exceedingly poor throw in to Lenglet saw Barça crumble at the back, allowing Negredo to extend the host’s lead.

Busquets was arguably one of Barça’s more reliable outlets in possession. Although he was slow to build plays and often took a considerable amount of time to assess his surroundings before making a move, the Spanish veteran played some terrific long balls over the top and defensively established an imposing figure, – with 4 out of 6 ground duels won and 6 out of 9 aerially – successfully keeping Cadiz at bay for a majority of the game.

Barcelona’s octopus in midfield may be nearing an end to his career, but is still invariably one of the most technically astute players at the club.

The Frenkie de Jong fans bore witness to at the Estadio Roman De Carranza was far from the player Barça had initially broken the bank to sign. The Dutchman not only struggled with his ground duels; but also took too many touches in possession as he decelerated the movement of the ball.

While it could certainly be argued that Frenkie was a workhorse, asserting his claim in various parts of the field, his influence dwindled with every passing minute.

Messi could only do so much to influence the game. (Photo by JORGE GUERRERO / AFP)

Despite the underwhelming score-line and the substantial amount of chances, Barcelona failed to utilize, Leo Messi was deserving of a better result.

The Argentine talisman looked a little nervy in front of goal, having taken innumerable attempts at goal. Still, he created various chances, took on defenders efficiently and located his teammates in fruitful areas through his constant creation of chances. As Leo registered a couple of key passes and completed 9 out of 13 dribbles, it’s fair to say Messi was a lone wolf in Barça’s dreary front-line.

Griezmann headed into this fixture with confidence engraved in him like never before, but due to the congestion in the final third and non-existent width, the Frenchman struggled to have his usual impact. While he failed to find the back of the net, Griezmann still accumulated 2 key passes and combined well with players surrounding him, not looking like a lost cause and often making some well-timed runs, which woefully found no end product.

Philippe Coutinho’s resurgence at the beginning of the season had fans excited regarding his return, but to the dismay of many, he seems to have lost his form again. The Brazilian is almost always a lost cause once situated on the left flank, and a subpar exhibition on the left-hand side was testimony to his inability to offer width or challenge defenders.

Braithwaite’s purple patch appeared to have halted against Cádiz since the Danish striker was contained effectively by the yellow submarine’s compact defence.

Braithwaite rarely executed his piercing runs behind the opposition’s back-line and subsequently failed to play the role of a reference point effectively. Without him orchestrating attacks and manipulating centre-backs, the team looked dreich and deprived of any form of innovation in the final third.