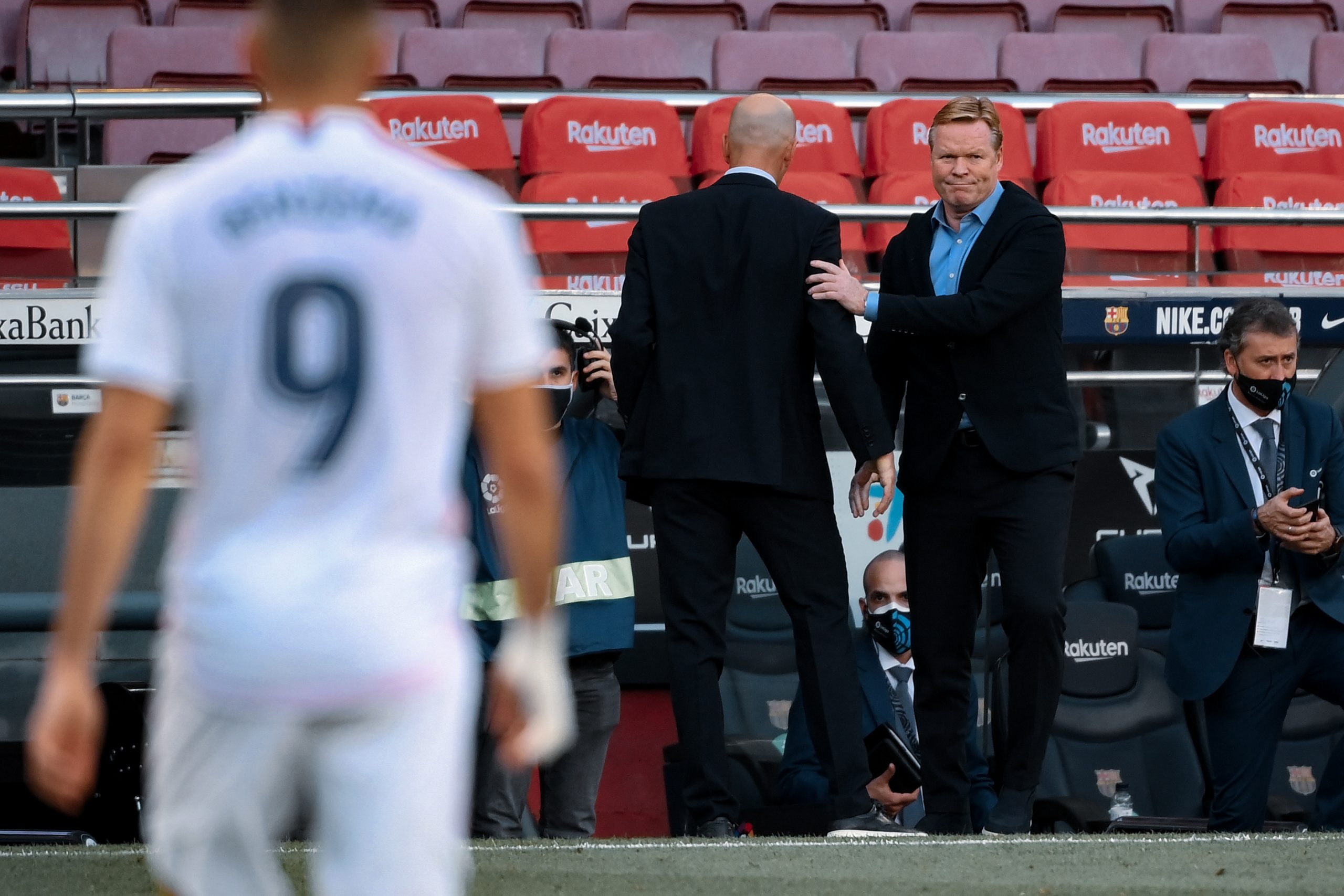 As they say, the form is never a factor heading into El Clasico. Nevertheless, there was optimism around the fixture with Real Madrid having lost points in their last two outings. On the night, however, Barcelona succumbed to their first home Clasico since 2017.

An evenly balanced game tilted to one side after a controversial penalty awarded to Los Blancos in the 63rd minute. While the Catalans fought well, an organised Madrid defence and some amateur managerial decisions saw them drop three points. Barça Universal now runs the rule over Ronald Koeman’s men.

When the Brazilian signed for FC Barcelona, playing in an El Clasico would have been beyond his wildest dreams. Tonight, Neto has not just played in the biggest game in club football, but stamped his name onto it in gold.

Neto was unlucky to concede 3; he was solid throughout the 90 minutes. (Photo by LLUIS GENE / AFP)

In the first half, he brought out an audacious save to deny Karim Benzema in a one on one situation. He can’t be blamed for the penalty, with it going just past his fingertips. Fast forward to the second half, and the Brazilian was on fire. A double save towards the end of the game, coupled with a sensational block off Sergio Ramos’ volley made him one of the MVPs. When a keeper has conceded thrice and is still one of the best players on the field, it speaks a lot.

Ronald Koeman surprised the world by playing Sergiño Dest ahead of Sergi Roberto for the big clash. It was a big moment for him, as he became the first player from the USA to play in an El Clasico. And boy did he not disappoint.

Tasked with facing Vinicius Junior on his first start at right-back, the 19-year-old had the Brazilian in a cage. Defensively he was solid, even denying Casemiro spectacularly in the first half. He boosted his performance by a strong performance while going forward as well. His dribbling skills saw him often break the Madrid lines and create attacking threats. Is he ready to become a full-time starter? He has certainly made a strong case.

The Spaniard was robust for most stretches of the game, winning duels and distributing the ball well. However, the first goal shows him out of position and clearly dissected. He was completely caught out of position by Karim Benzema, who slid in a ball to Federico Valverde. Additionally, he was often at the losing end of the footrace, constantly outpaced by Real Madrid’s young forwards.

Lenglet was constantly at the end of rookie mistakes tonight. (Photo by Alex Caparros/Getty Images)

Clement Lenglet will come under heavy criticism for the penalty conceded. Shirt pulls during set pieces are clear penalties, yet the Frenchman has been caught doing so very often. His lapses in concentration often put the Catalans in trouble, once again exemplified by tonight’s game. Though he had his share of bright moments, it was overall a disappointing outing for Lenglet.

Alba returned to action for the first time since his injury against Sevilla. Though his crosses were not completely accurate, he was a major part of that dangerous left flan, where his combination with Ansu sparked the equaliser for Barcelona. The Spaniard formed a healthy combination with Frenkie de Jong when in possession which was lovely to watch. Defensively, however, he was on the losing end of duels, more often than not.

Frenkie de Jong has set the bar high for himself after his wonderful showings at Ajax and for the Netherlands. How much ever he does, it does not seem to satisfy the fans nor himself. On the night, Frenkie had a decent game with 2 key passes. His dribbling in tight spaces and spatial awareness was crucial when Barcelona was in possession. With his one-touch passing, the Dutchman put up a fairly good performance in midfield and helped create threats. However, the question remains, can he do more? Certainly.

The one clear-cut conclusion that Culés across the globe agree upon after this loss is that Sergio Busquets is finished. It has been said for a while now, but this could be the final nail in the coffin. On the night, the Spaniard was by far the worst player in the field. His inability to track-back opened up multiple channels for the opposition. Overall, Busquets slowed down the game for the Catalans and simply put, was a liability for all his teammates on the field. Period.

Culés can only hope Busquets has played his last game in the Garnet and Blue. (Photo by LLUIS GENE / AFP)

The Brazilian has enjoyed a strong start to the season and continued it with yet another dominating performance against Real Madrid. His dribbling in tight spaces was invaluable to the Blaugrana’s attack. Moreover, it must be noted that the Brazilian looks much more settled than he has ever looked before. 10 out of 14 dribbles won, 100% successful dribbles and two tackles on the night. On another day, he would have buried the header into the back of the net to see Barcelona going ahead.

Inconspicuous yet invaluable. 3 words that summarise the 17-year-old’s performance. It was surprising to see Pedri starting on the right wing with other options like Trincao and Dembele on the bench. Though he could not provide the width that Barcelona needed on the right-wing, he was instrumental in the link-up play. His comfort and maturity on the ball allowed him to take down the likes of Casemiro with ease. The final product was lacking, but the signs are promising.

Ansu Fati keeps breaking record after record. A week before his 18th birthday, the prodigy has now become the youngest player to score in an El Clasico. Unlike previous games where he was a winger, Koeman played Ansu in the #9 role. No doubt he can play as a potent striker, but his productivity seemed much more on the wing. Fati found himself head-to-head against Sergio Ramos, and he did create two big chances that should have been finished. Yet, it just feels that his natural position on the left wing is where he rightfully belongs.

The captain had quite a bipolar game on the big night. In the first half, there were signs of the vintage Lionel Messi finally returning. His clean dribbles and line-breaking passes were a treat to the eyes, as he played in the crucial pass that led to the Fati equaliser in the 8th minute.

It was indeed appalling that Casemiro’s tackle on Messi did not even go to VAR, but the Argentine could only do so much. Yet, in the second half, he seemed to have been quietened again. Even while silenced, he continues to be one of the most decisive players on the pitch. While the #10 has not been the goal-scoring machine we have known him to be, there is a sentiment that he is not too far from returning there.