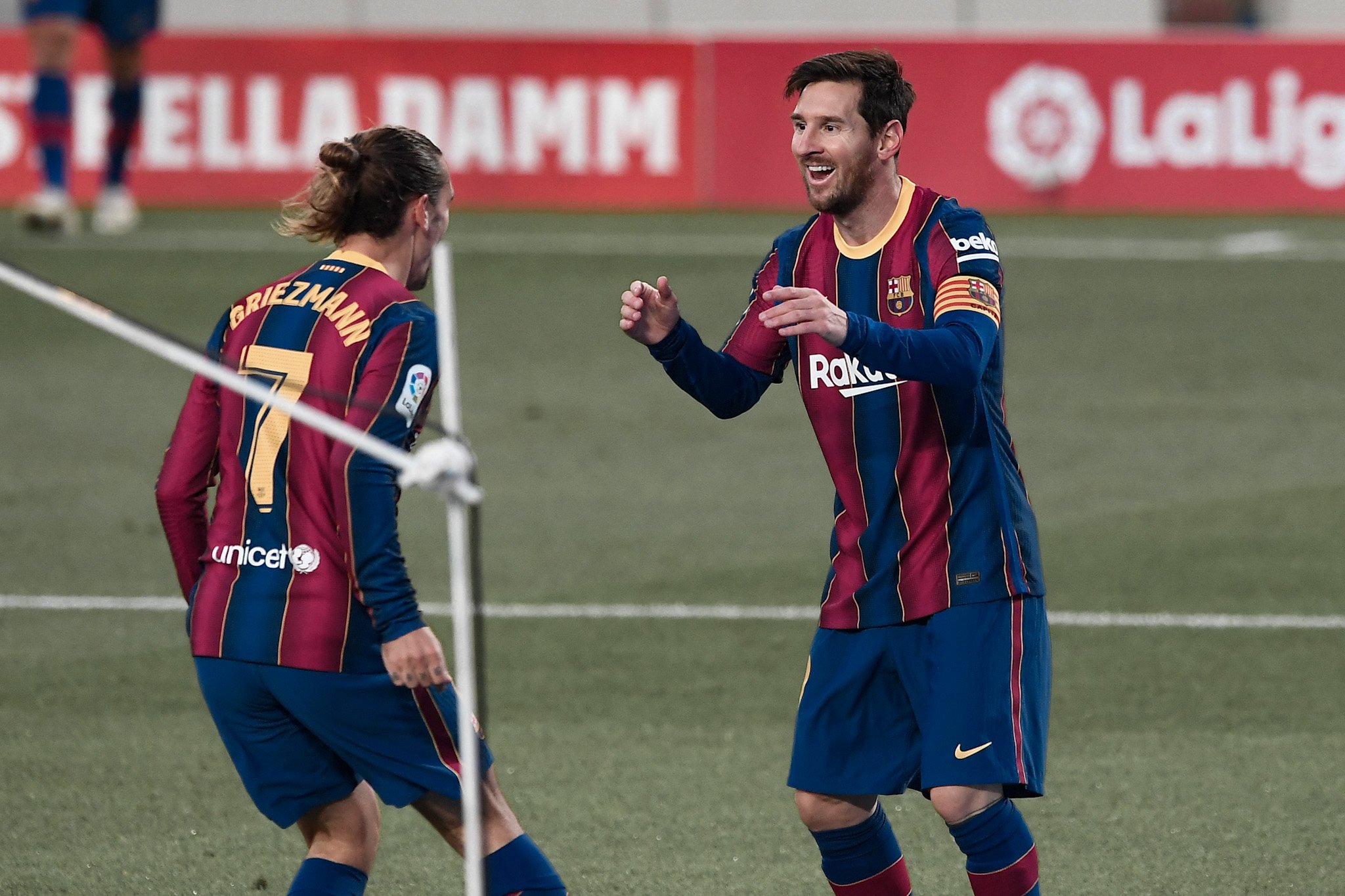 It finally happened; Culés have been put of their misery tonight as Barcelona put on an absolute show at the Camp Nou against Real Betis. This game, on any other day, would not have been celebrated as much as it is being now, but that is what no wins in four consecutive games in the La Liga does to you.

It was rather eventful from the get-go, as Barcelona attacked the Betis half with intent and pace, creating multiple chances, lined up in the closest thing to a 4-2-4. Barcelona’s attacking intensity was mirrored by Betis, who made no mistake to target the hosts’ right flank in the hope to recreate their 4-3 over Barça from 2018.

A second half masterclass from Lionel Messi, who came on to contribute directly in the form of two goals helped Barcelona seal a 5-2 win in a very open game, with little importance on defending. Barça Universal now runs the rule over the victors from the afternoon.

The German started his first game in La Liga this season and had a solid game in goals. Though he conceded two goals, there was very little he could have done to prevent them. His defence was shaky ahead of him, but Marc-Andre ter Stegen kept his composure and tried to keep his team motivated. The 28-year-old made several great saves and was excellent with his distribution of the ball.

Sergi Roberto had a torrid time defending against the Real Betis attackers. He was pulled out of position, and it was too easy for midfield runners to get in behind the Spaniard. Most of the successful attacks of the visitors came down Roberto’s flank. This is not the first time Barcelona’s opponents have exposed this weakness in their defence.

Both of the Andalusian’s goals came from Barça’s right side. For their first goal, the right-back failed to close down the cross properly and deflected it into the path of Antonio Sanabria who finished his chance well. Betis’s second goal came as Gerard Piqué was pulled out of position to cover the right back. The defending was poor from the Catalan side again but especially from Roberto.

In contrast, when Los Verdiblancos went down to ten men, the 28-year-old showed how effective he can be going forward. With two assists and more chances created than any other outfield player barring Antoine Griezmann, this is Roberto’s strength when playing at right-back.

Gerard Piqué has not had the best start to the campaign. As the leader of the defence, conceding eight goals in six games is poor for the usual standards he has set at the club. In fact, Barça have only managed to keep three clean sheets in ten games in all competitions this season.

However, the centre-back was not particularly at fault for any of the goals today. He found himself being dragged out to the right as he was forced to cover this area too often. It is a real weakness in the team and needs to be fixed if the Blaugrana are going to challenge for trophies this season.

Apart from this, Piqué had a dependable performance and his distribution was accurate. Though he was not threatened too often, he dealt with Real Betis’s attacks well.

The Frenchman was relatively quiet during the game. Clement Lenglet was rarely called into action as most of the attacks came down the other side. He distributed the ball confidently, and this is a real strength of the former Sevilla man. His left-foot really benefits the team in the build-up play and he can is confident under pressure.

However, it was not a flawless performance from the centre-back as two preventable goals were scored. The Barcelona defence still seem to easy to score goals against. His partnership with Gerard Piqué does not seem as strong as it once was. They both failed to clear the cross for the visitors opening goal, although it did take a deflection.

Jordi Alba had another impressive display going forward again for the Spanish giants. Ronald Koeman had made it clear that he wanted to see the best version of the left-back this season who has stepped up to this request and is a constant threat down the left flank. This was made easier by Real Betis not attacking down his wing.

The Spaniard always times his runs to perfection and normally delivers a great cross to one of his teammates. The left-back linked up with Lionel Messi perfectly offering himself on the wings and helps pin back the opposition’s wingers. Alba has improved this season and is an important part of this Barcelona side.

Sergio Busquets importance in the team keeps reducing as he goes another game without doing much. The natural order has taken over as the Spaniard fails to compete with players in better shape physically — in terms of both speed and strength.

Despite his two key passes, Busquets is becoming a target for the opposition, who find it easier to dispossess him. Stemming from that, the World Cup winner does not attempt the audacious passes he used to, once.

His inclusion in the team has started to make little to no sense, as not only does it bring the worst out of Frenkie de Jong – through no fault of his own, though, but also because it cuts off a spot in the lineup for Miralem Pjanic, a midfielder whose support base grows with each outing.

Arguably the best player on the pitch, Frenkie de Jong had a fantastic game controlling the midfield. The Dutchman covered the spaces expertly and pressed the away side relentlessly and was successful in doing so. He also won the ball in advanced positions and also helped out his defence immensely.

It was not just the midfielders impressive defensive display; he kept the tempo of the game alive. The former Ajax midfielder passed the ball quickly and found his teammates in dangerous positions. He also ran with the ball effectively, and his change of pace is a real asset to the squad. De Jong is an engine in the middle of the pitch and can easily glide past anyone pressing him.

This was a complete performance from the 23-year-old and hopefully keeps this level up. He has the ability to dominate games and really lift the tempo of Barcelona, which sometimes suffers due to tiredness.

Slowly, but steadily, Ousmane Dembele is finding his feet at Barcelona this season after a long-term injury. He made it clear today with another dynamic display at the Camp Nou.

He scored the opener for Barcelona in the first half with a stunning goal which nearly burst the net into shreds. The goal gave him a lot of confidence as he showed more intent and took responsibility on and off the ball.

📊 — Dembélé has scored 22 goals for Barcelona, 11 with his left foot and 11 with his right. pic.twitter.com/CDO3L5IYyf

Unlucky to not end the game with a brace, at the very least, as his effort in the second half was blocked off the line by Aissa Mandi with his hand. He was sent off, without much rebellion, and five minutes later the 23-year-old was subbed off.

A rollercoaster of a performance if we ever saw one — Griezmann came into the game with a clear intention, to prove to fans and the coach that he can handle proceedings without Lionel Messi next to him.

With that in mind, the World Cup winner attempted multiple shots, most of which failed to meet their target. Despite that, he was clearly the protagonist for Barcelona in attack, and only got his head low after missing the spot kick against Claudio Bravo.

That was rock bottom for him, however, as he came into the second half with a fresher mind, coupled with the inclusion of Messi, which helped him bag a goal four minuted into the half, after a dummy by the captain found him in front of an empty net. One thing was clear: playing him in his natural position helped him make runs off the ball and create chances for himself.

Jury still out on Griezmann? (Photo by Josep LAGO / AFP)

It is clear that at 17, Pedri is not meant to start every game for Barcelona at the highest level, and mismanagement like the one he is receiving may come to bite him.

The Spaniard was barely involved in the game, capping off the first 45 with just one chance created, for Griezmann. The second half did him no good, either, as his role on the left often left him too segregated from the team. Through all the luck in the world, though, he got his first goal in La Liga, as he was able to connect from a pass from Sergi Roberto, initially intended for Martin Braithwaite.

Starting in the capacity of a natural number 9, Ansu Fati enjoyed a rather eventful half, after which he was subbed off owing to an injury scare.

With his 45 minutes, however, Fati was constantly involved in the attack, making space for him in front of the Betis defence, and playing clever passes from and into the final third. This included a spectacular pass to Antoine Griezmann whose shot missed the post by margins.

He made his best contribution before going off a pass by Jordi Alba found him in the box, after which he was tripped by Aissa Mandi. Barcelona were awarded a penalty, which was eventually missed by Antoine Griezmann, but that cannot be help against Fati.

Inarguably the best performer of the game, Lionel Messi changed the game as soon as he came on at the halfway mark. The team reeked of more confidence and it was visible with each touch, pass, and shot.

His first contribution was setting up Antoine Griezmann for his goal as he faked a grounded cross from Alba, which fooled the backline, leaving the goal all but marked. The sheer presence of mind in this goal was unreal.

To top of it off, Messi then scored a penalty in the 60th minute following a handball in the box by Aissa Mandi. And just when his work was done, the six-time Ballon d’Or winner skipped past two challenges and absolutely thumped the ball into the roof of the net from close range to make it four for Barcelona on the night, and one for himself in terms of open goals this season. An impact like none other.