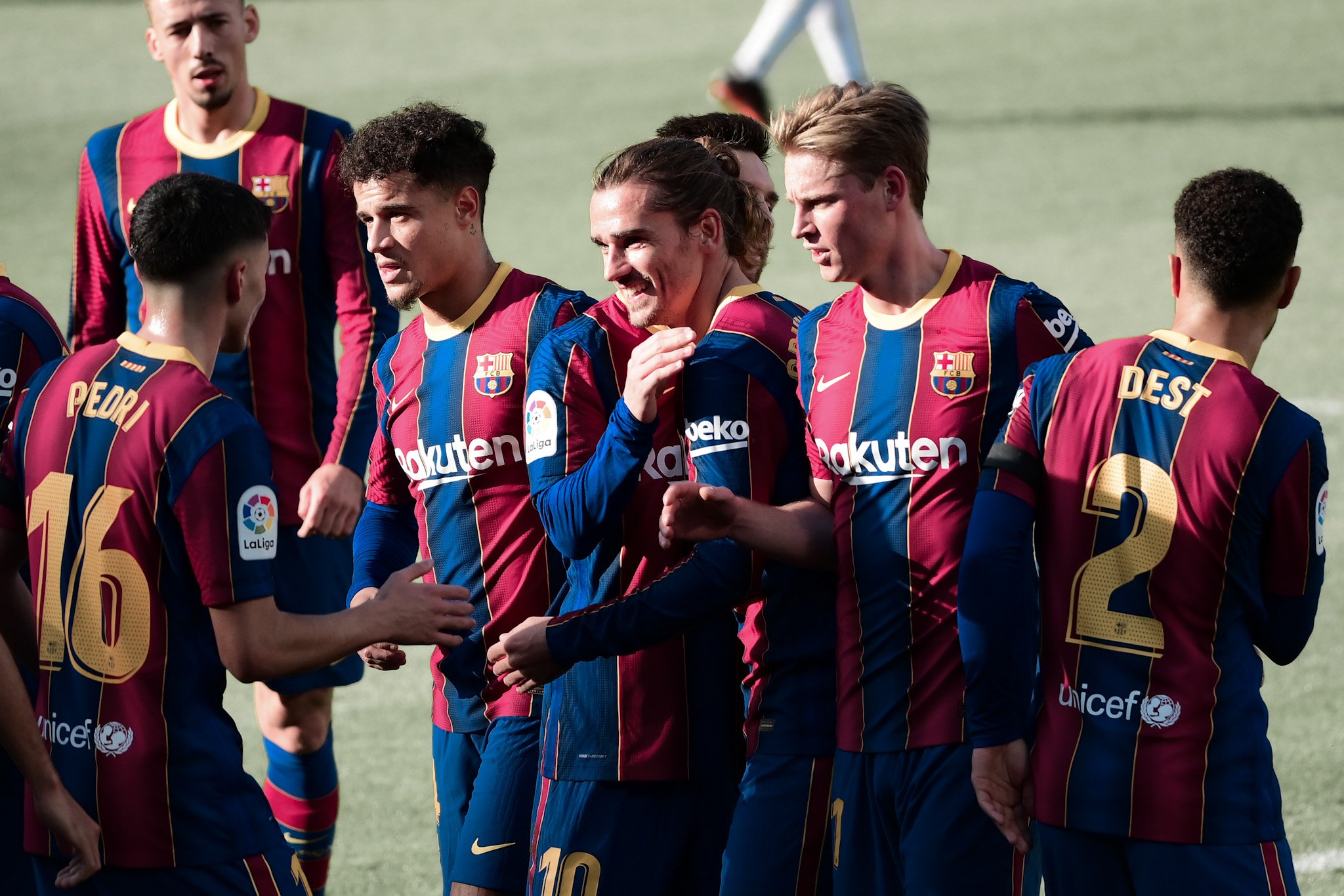 It almost feels like eternities since Barcelona produced a performance this convincing and cohesive in La Liga. Barça’s front four feasted in front of goal, brutalizing Osasuna with an unpitying performance in the final third. Ronald Koeman’s gamble in the starting XI surprisingly paid off massively as the Catalans embodied flair and simplicity on the field.

As the hosts picked up all 3 points with a dominant 4-0 score-line, this unquestionably proved to be the Catalans’ most complete exhibition in the League thus far.

In spite of fielding multiple profiles that demand a considerable amount of authority and thrive in a particular niche, liquefied occupation of zones and the elegance displayed every time players would alter roles was simply second to none. Fluid sequences in the final third coupled with beautiful rotation of roles between Messi, Coutinho, Griezmann and Braithwaite provided supreme assertion in the centre of the park.

Yet another excellent exhibition from Ter Stegen, who maintained applaudable composure between the sticks. While the woodwork saved him from conceding on one occasion, Barça’s wall in goal clinched a terrific clean sheet with his agility and unparalleled anticipation, helping him reign supreme.

The German shot-stopper has now salvaged two clean-sheets in a row after his shocking error against Atletico Madrid at the Wanda Mteropolitano.

While expectations were set immensely high for Sergiño Dest after the American sensation produced a dynamic exhibition against Dynamo Kyiv, it would be fair to say he measured up to them with relative ease.

In spite of being a doubt for this game, Dest was completely in control of Barça’s right flank, marauding upfront casually and barraging in crosses with tremendous efficiency. Besides, the 20-year-old was a reliable outlet in defence as he frequently tracked back to deny the danger. Eventually, due to precautionary measures, Koeman brought the youngster off in place of Firpo.

Another game, another excellent outing for Oscar Mingueza. The 21-year-old has taken responsibility and stepped up in the opportunities that he has been provided with, showing that he is a more than capable of featuring in the Blaugranas’ gawkish defence. Mingueza’s anticipation of the ball always allows him to be in the ideal position to win challenges and retrieve the ball, as was particularly seen against Osasuna in the first half.

A laudable facet of his gameplay is the fact that he does not seem to be unsettled when having to defend torrent crosses, clearing the ball away with ease. Most importantly, however, he is an adventurous ball-playing defender, which is advantageous to the overall buildup of the team.

Clement Lenglet was tasked to command the back-line in Piqué’s absence and did ever so well to restrict Osasuna from finding clear cut opportunities to score. Emerging successful in nearly all his duels – winning 3 out of 2 on the ground and 3 out of 6 aerially –, Clement was on route to concluding the game with a well-earned clean-sheet.

Nonetheless, the Frenchman was forced to retreat in the second half after suffering a nasty blow to the ankle, which woefully adds another player to the long list of injuries the Catalans have endured over the course of the campaign.

Heavily involved in the attacking third, Alba played a critical role in stretching the play for the Catalans. The Spanish left-back had several moments of exceptional link-up plays with a majority of his partners in crime, especially with Messi, as his telepathic connection with the little genius enabled the hosts to ignite promising plays in the final third.

Alba picked out some brilliant runs on the left-flank, but his decision making on the ball was poor. (Photo by David Ramos/Getty Images)

The Argentine’s diagonal through balls to Alba played a key role in opening the Osasuna defence up, which subsequently led to the Catalans scoring plenty of goals. Even so, Alba’s tendency to press up sometimes left spaces behind on the left flank, resulting in the main source of attacking exploitation for Osasuna.

An underwhelming performance from Koeman’s trusted apprentice. The 18-year-old was assigned in a double pivot role, berthed alongside Frenkie De Jong. Unsurprisingly, playing from the base of midfield disabled Pedri from expressing his virtuosic abilities on the ball.

As seen on multiple occasions before, the youngster thrives between the lines and with pressure looming over him. Woefully, his unfamiliar role as a pivot saw him lose possession cheaply at times. Rest for Pedri is certainly also beginning to feel long overdue.

The Dutchman took absolute control of the midfield, proving to be pivotal in Barcelona’s possessional dominance. The 23-year-old had made it his responsibility to ensure efficient movement of the ball into the opposing half and succeeded in distributing the ball to the forwards. De Jong displayed a marvellous sense of awareness as he frequently attempted to find runners into the box via the usage of through passes.

Furthermore, he provided a reasonable amount of support to the back-line, even making a crucial clearance after a ter Stegen parry. It appears that the former Ajax prodigy is finding his feet once more.

The six-time Ballon D’Or Winner once again showed the innate set of skills he possesses. Leo may have scored merely one goal, but what made his performance a sight to marvel at was the sheer creativity that he added to the game. Every touch of the ball from the Argentine, every dribble he attempted, created some sort of opportunity for the Catalans to score.

An entertaining and vital element of Messi’s performance in this game was the countless amount of world-class passes that he managed to pull off, making them look as easy as plucking lemon from a tree.

📊 — Messi's heatmap against Osasuna in the shape of a goat. No coincidences here. pic.twitter.com/B3i45JPy8i

However, while his creation of chances was utterly unparalleled, what was most relieving was the way Leo put an end to the nonsensical talk about him not being able to score from open play, simply scoring one of the finest goals that Barça have scored this season. Finally, he concluded the perfect afternoon with a tribute to the late Diego Maradona, a man who meant so much to Leo and inspired a generation of football fanatics.

Griezmann’s grievances in front of goal were finally put to bed as the Frenchman had arguably his most impressive display in an Azulgrana shirt.

Although Griezmann has had a handful of impressive performances this campaign, his intelligence and effective occupation of spaces never truly translated into goals. This finally seemed to change for the better against Osasuna, as the French forward was paid dividends for his beautifully executed runs and alternation of roles in the 42nd minute of the game. With a vigorously struck volley, Griezmann found the back of the net emphatically, extending the club’s lead to 2-0.

Griezmann was quite happy with his goal yesterday. (Photo by LLUIS GENE / AFP)

After an exceedingly promising first-half performance, he continued to be a vital asset in Barça’s build-up plays as well, eventually even securing himself a wonderful assist for Coutinho’s tap-in. It appears that shedding some light on his current situation at the club and clearing the air in front of the public eye has taken some massive weight off his shoulders.

The Brazilian maestro was situated on the left flank of the pitch, where he usually struggles to influence the game, but on this particular occasion, Coutinho managed to trouble defenders and weave his way through pressure situations continuously.

Despite missing a prominent goal-scoring opportunity in the first half, he made up for his slight error after proceedings by finding the back of the net in the 57th minute of the game. Albeit the former Liverpool man is considerably effective through the centre, his rotation in roles and smooth interplay with his partners in crime was an encouraging sign.

Barcelona’s lord and saviour in front of goal once again highlighted the significance of employing a natural number 9, a player that can not only act as a reference point for others; but also find the back of the net when needed.

Braithwaite was awarded a chance in the starting XI after a salient cameo against Dynamo Kyiv and he unfailingly repaid Koeman’s trust in him with another goal on the score-sheet. The Dane forward is bearing fruit for his persistence and commitment at the club, and is slowly but surely cementing himself as a recurring member of the starting XI.