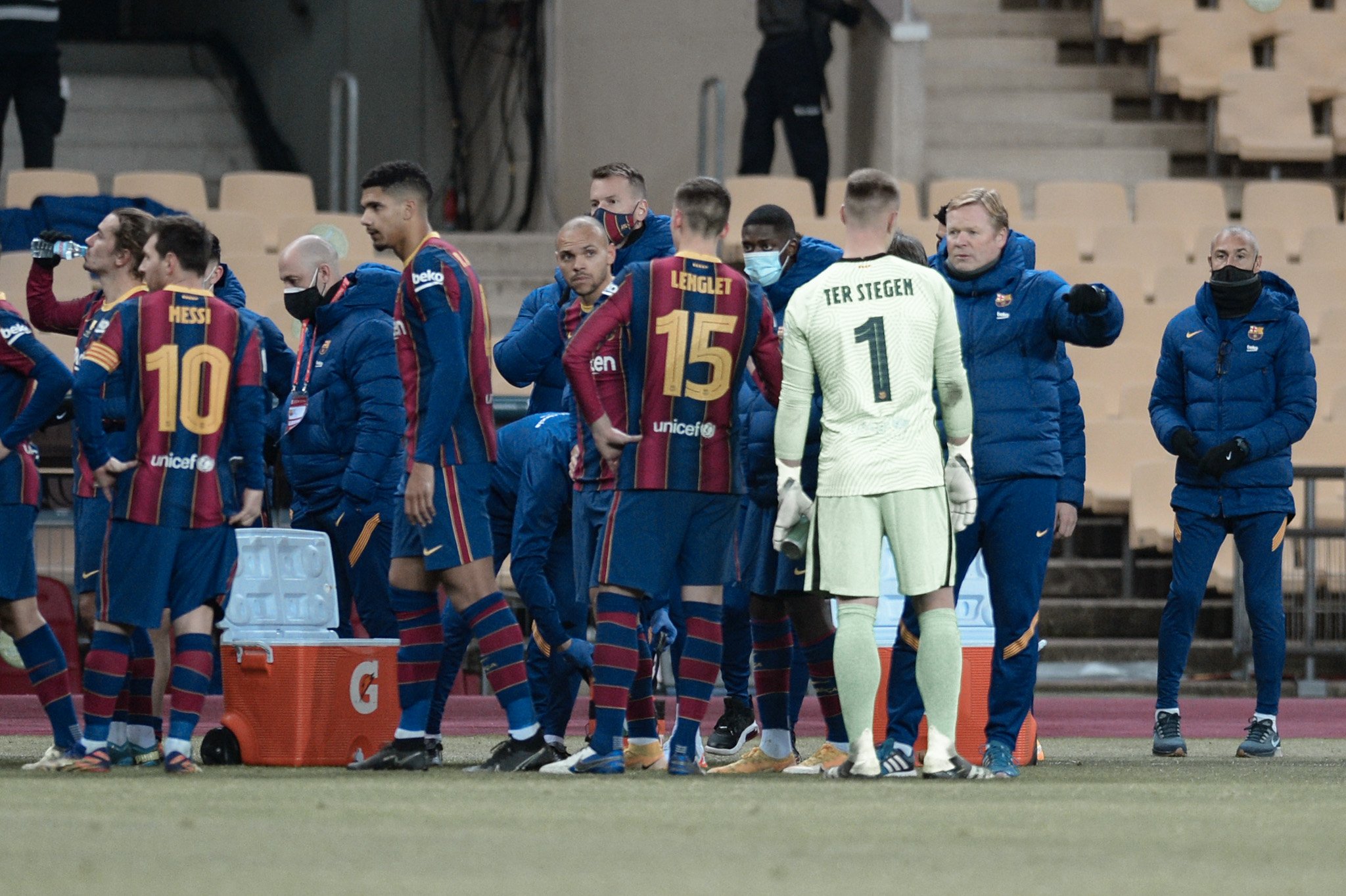 Barcelona’s season continues to go wayward as the Catalan giants fell to defeat against Athletic Bilbao in the Spanish Super Cup final. The game headed into Extra Time after Barcelona were unable to defeat their dad on two occasions, but a goal from Inaki Williams as soon as ET started was enough for the Basque outfit to seal the deal for Marcelino’s men. A rather eventful game as is was capped off with a red card to Lionel Messi – the first in his 753 appearances in his club career. Barça Universal runs the rule over Ronald Koeman’s men.

Not a lot ter Stegen could do about either of the goals scored by Bilbao, but he did make one clutch save off a Raul Garcia effort in the first half of the game. Deserves to be screened a lot better.

Dest was not able to fully recover off of an injury that he picked up some games ago, and consequentially, was subbed off for Oscar Mingueza just when the first-half ended. Combined well with Ousmane Dembele on the right, and won 3/3 of his ground duels.

Araujo has been a break-out star this season in the heart of the Barcelona defence, and proved why he is the best defender at the club yesterday. The Uruguayan made some clutch defensive recoveries in his defensive third, and won 5/6 of his aerial duels. He made only one foul in the 120 minutes he played and was arguably the most involved player in each buildup for Barcelona.

Lenglet, yet again, came up clutch – for the opposition -, putting on an embarrassing display in the heart of the team. The Frenchman can be blamed for both of Bilbao’s goals that were scored in regulation time. Needs to do better if he does not want to be replaced once Gerard Pique returns.

Jordi Alba is a phenomena — an offensive powerhouse when the team is moving forward, but a defensive disasterclass with each step. He set up both of Barcelona’s goals combining with Lionel Messi and Ousmane Dembele respectively, but was also at the end of individual errors that led to goals for Barcelona.

Continuously one of the only positives for Barcelona, Frenkie de Jong continued to put in a lot of effort in the midfield, carrying the ball through the strong winds of press of Marcelino’s midfield. He completed 6/6 of his dribbles, won 12/14 of his ground duels, and 2/3 of his aerial duels. Additionally, the Dutchman won five set pieces through fouls, while only fouling once.

Busquets has clearly picked himself up and dusted himself off since Ronald Koeman’s shift to a single pivot. He was well positioned throughout the game (four interceptions), and was the most involved player in the game with 123 touches of the ball.

Starting his ninth game in a row, 18-year-old Pedri showed immense fatigue in the centre of the pitch yesterday. He was unable to influence the game like he usually does, and was asked to come off in the 88th minute.

Probably Dembele has set up a bar too high for himself as of late, and his less-than-spectacular performance seemed underwhelming yesterday. He did not look as dynamic as he usually does, which is understandable coming off the back of a 120 minute performance against Real Sociedad.

Lionel Messi was arguably not fit enough to start in the finals but had to make it through owing to the importance of the fixture. All his good work was undone when he picked up a red card after what was a shameful off the ball foul, which earned him a red card in the 120th minute, further putting Barcelona in jeopardy.

Griezmann was inarguably the best player for Barcelona yesterday, scoring his second brace in four games. He opened the scoring for Barcelona in the first half, and then helped took the lead again in the second. All his hard work was undone, though, as the Catalan giants lost the final. The World Cup winner did not shy away from showing his frustration in the post-game presser, where he said he was, “Fu*ked, annoyed, and angry.”