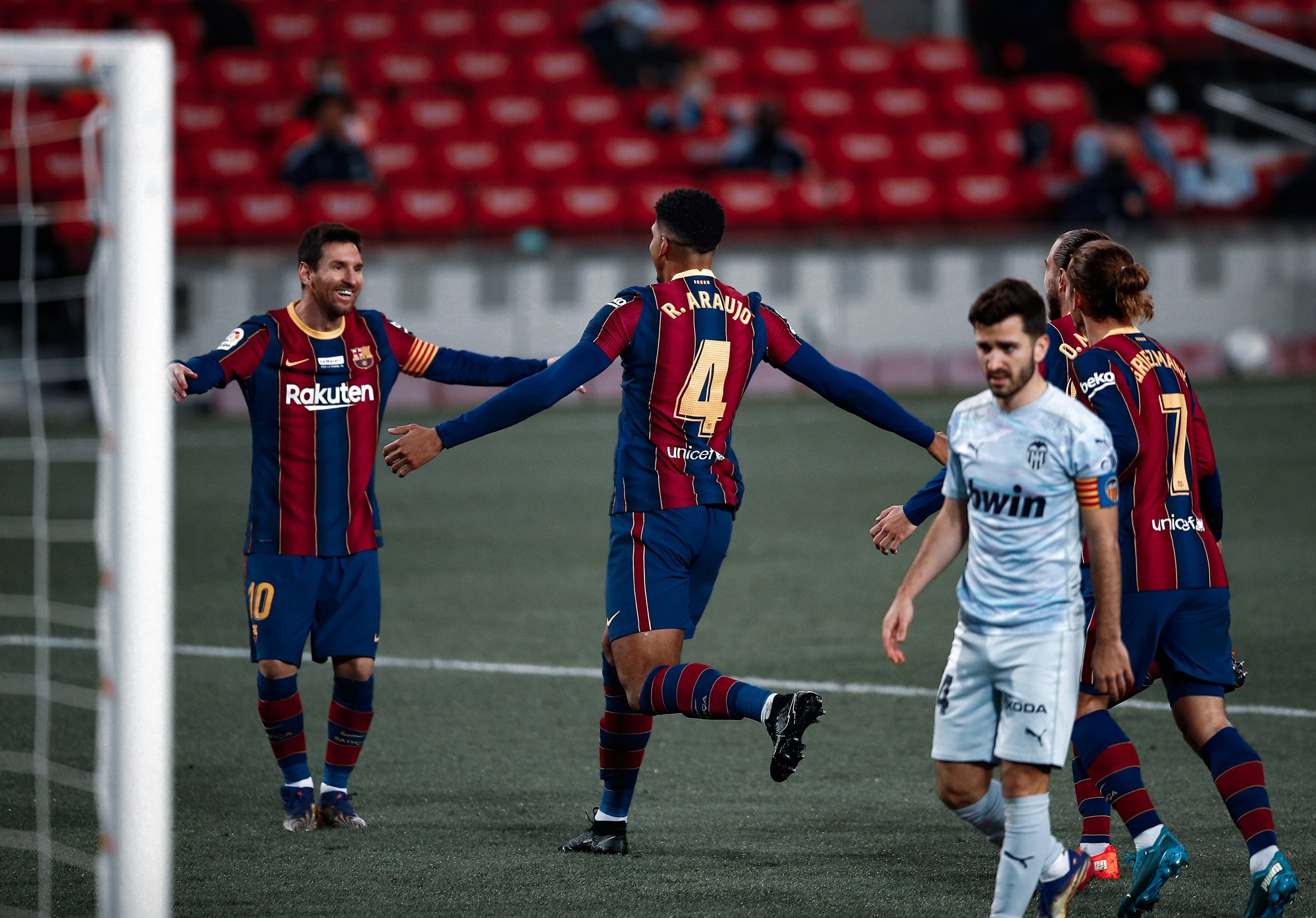 Barcelona are brought back to reality as Koeman’s men follow their habitual ritual of taking one step forward, but two steps back. After an incredibly promising exhibition against Real Sociedad, all that progression appeared to have been thrown out the window with the side cheaply falling off the wagon.

While a far more dynamic second half following an underwhelming first half, a recurring theme for the Catalans is proving to be lack of structure on the field. Not fielding any legitimate wingers and squeezing in four number 10s on the same field was bound to impede the club’s success at home soil, which proved to be the case against a valiant Valencia side that were lethal on the counter and rigid in defence.

In spite of picking the ball out of his net on two separate occasions, Ter Stegen could do little about the goals conceded. He was trusty as ever with his distribution of the ball and made a remarkable save to deny Soler from scoring in the 28th minute. The German was simply worthy of a better outcome but forced to pay the price for Barça’s defensive fragility.

After a few bright performances in the Azulgrana jersey, Dest had a fairly underwhelming game at right-back, especially in accordance to his high standards. The American sensation left acres of space for Guedes and Gaya to exploit and was surprisingly weary in transitions. Lack of rest must surely be having an impact on the youngster. In addition, while he produced a few well-timed crosses, Barça generally built plays minimally from the right flank which led to Dest not being a major part of the game.

Yet another impeccable display as the ubiquitous Uruguayan stamped his authority on every part of the field, proving to be a wall in defence and a menace in front of goal. Ronald Araújo was exceptionally reliable at the heart of the defence, thriving due to his positional maturity and unmatched awareness, but the moment that truly elevated his performance was the sizzling scissor kick he scored in the 52nd minute of the game as he found the back of the net with extreme proficiency.

Araújo: "I'm happy that I scored my first goal for this great club, but I'm disappointed with the draw." pic.twitter.com/bH5Mb66UbG

In Piqué and Lenglet’s absence, Barça have unearthed a gem that won’t only bear the club fruit for the future; but is already paying them dividends.

Mingueza carried the ball up-field terrifically, casually disguising himself as an interior with his excellent attributes on the ball. However, the Spanish prodigy was far too reckless in his challenges and was largely responsible for Gomez’s leveller as he allowed the forward to get past him and slot a poacher’s goal. As meteoric as his rise may be to the first team, there’s still lots of room for improvement for the beaming La Masia talent.

After wreaking havoc against Real Sociedad, Jordi Alba entered this encounter with plenty of expectations, which he struggled to measure up to. Alba’s deflected cross to Messi earned Barça a goal. Still, the Spanish full-back’s low driven cut-backs were substantially predictable down the left-hand side with the former Valencia man even looking shaky in defensive transitions. Despite being the only provider of width, Jordi was far from his best version.

Having started the game in a single-pivot role, Busquets was tasked to dictate plays from the base of midfield. However, to Barça’s dismay, the veteran was annoyingly dreary in the possession and gave the ball away in crucial areas of the field, paving the way for Valencia to launch cunning counter attacks. Subsequently, Busquets came off for Frenkie de Jong at halftime.

At the tender age of 18, Pedri has already asserted himself as a consistent starter at Barcelona and is unfailingly repaying Koeman’s trust in him with laudable exhibitions. After an exceedingly promising performance against former table toppers, Pedri once again was one of the few encouraging factors from a distressing draw. Pedri was creative between the lines, always looked to progress the ball in desirable territories and never rebuffed his defensive duties. A treat to watch.

Coutinho was certainly below par in the first 45 minutes as he struggled to add width or stretch the opposition, but appeared to have received a wake-up call after proceedings as he took multiple shots at goal and dribbled forward with more conviction. However, despite the minuscule progression enabling Coutinho to grow into the game, the Brazilian is nothing more than a burden in unnatural positions and is struggling to recreate his performances from the start of the campaign.

Griezmann’s performances are proving to be as unpredictable as the English weather with the Frenchman frequently falling prey to his inconsistent nature. Griezmann, albeit was a workhorse and tracked back at any given opportunity, was still ineffective in the attacking department and massively responsible for Valencia’s opener.

Griezmann – making a schoolboy error – failed to mark Diakhaby on a corner, who slotted a comfortable goal past Ter Stegen. Eventually, Ronald Koeman brought off Griezmann as the World Cup winner sulked off the pitch in agony.

The dynamic Dane was not a reliable presence on the left flank and was contained effectively by Daniel Wass. Braithwaite made some well-timed runs behind the Valencia back-line and always attempted to link up with his partners in crime, but proved that his place in the squad lies as a striker; not as a winger.

The Argentine talisman was surrounded by a flock of Valencia players whenever he would receive the ball and consequently struggled to impact the game in a significant manner. While Leo also failed to equalize from the penalty spot, a well-placed header from the rebound enabled him to equal Pele’s record of most goals for a single club.

Messi was minimally involved in the game, as opposed to his performance against Real Sociedad, but managed to find himself on the score-sheet nonetheless.