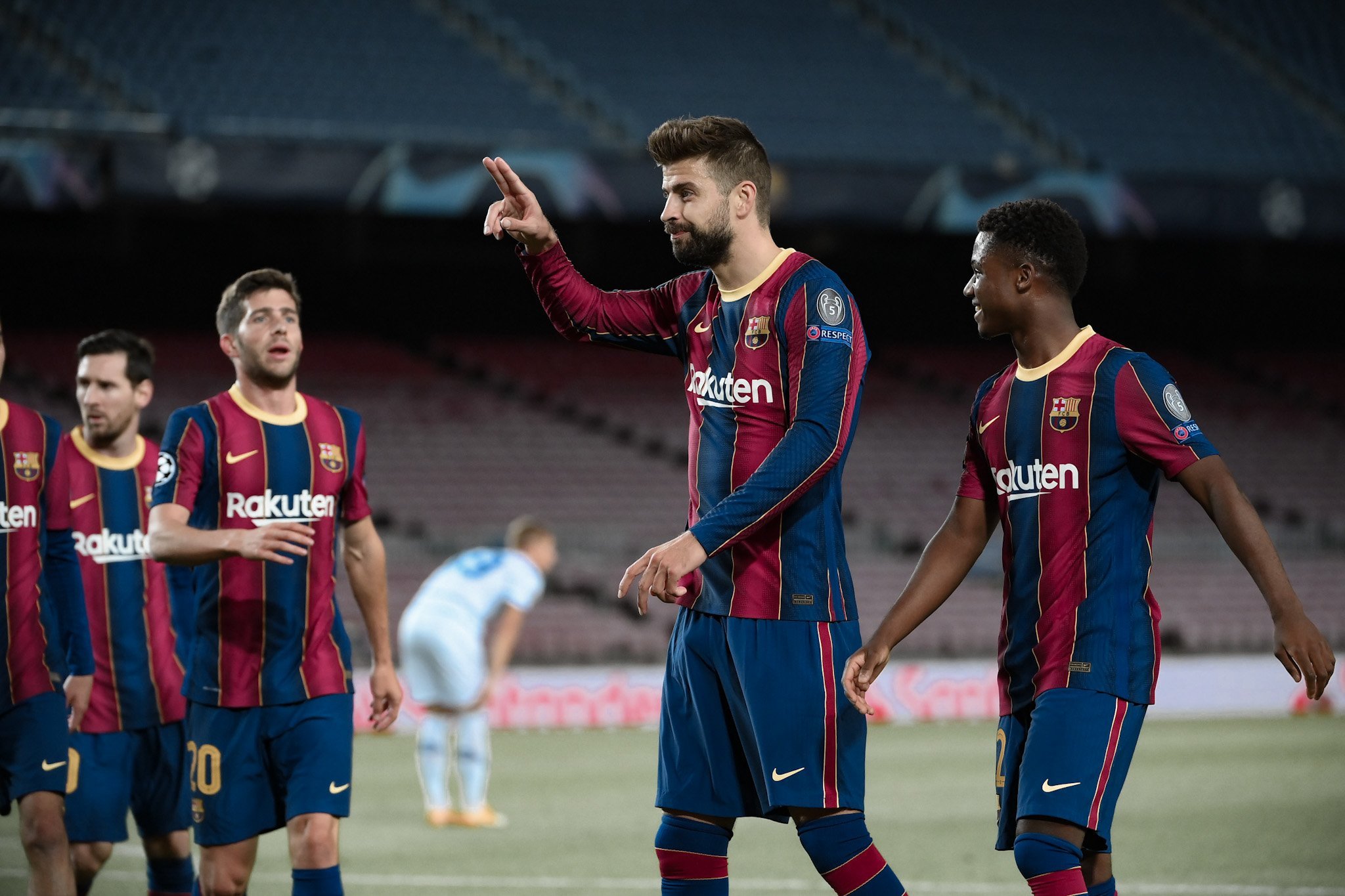 Barcelona managed to seal all 3 points in an incredibly cagey affair with Dynamo Kyiv as the Catalans miraculously only conceded once. Despite showing signs of progression in the final third, Barça looked exceedingly vulnerable after proceedings with lack of defensive solidity, desynchronized pressing and minimal creativity through the centre leading to a dismaying performance.

That said, this win now cements Koeman’s side as leaders in the Champions League group G. With lots to learn and a demanding opposition on the horizon, here’s how the players fared in their 2-1 win over Mircea Lucescu‘s men.

After a lengthy hiatus which saw the German goalkeeper out of action for around 3 months, Ter Stegen returned to reclaim his throne with a performance only he would be capable of producing.

Barcelona’s unorganized defence let the 28-year-old down by conceding in the second half, depriving him of a hard-earned clean-sheet. Still, Super Stegen proved to be an indestructible force between the sticks, reigning supreme in nearly every 1v1 situation and making 6 remarkable saves.

Ter Stegen’s distribution was also unsurprisingly on point with his flawless anticipation of the game, allowing him always to release the ball at precise moments. While Neto displayed a few commendable performances in Marc’s absence, there is no match to the German wall’s capabilities.

Sergino Dest was no way near his best, struggling to recreate the performance he exhibited in the Clasico. Even so, it was a solid outing for the youngster, who effectively compensated Messi’s vacancy on the right flank. In addition, the American produced a few exceptionally well timed crosses.

Although Sergino’s output in the final third was certainly above average, Gerson Rodrigues gave him trouble on the right flank, testing his defensive awareness frequently. Dest’s rawness is still very much visible, but he seems to be oozing with confidence and adapting to the club at a rapid pace.

The Spanish veteran was a lonely figure in Barcelona’s secluded back-line, often forced to single-handedly deal with Dynamo’s nifty forwards until ample support arrived. Despite that, Pique remained largely untested in aerial and ground duels, mostly tasked to accurately distribute the ball from the back, which he excelled in.

Eventually, the World Cup winner extended Barcelona’s lead in the 65th minute, with a beautifully executed header through his compatriot Ansu Fati’s cross.

While de Jong’s distribution was immensely precise, Ronald Koeman’s newfound obsession to play De Jong in defence didn’t prove to be ideal on this particular occasion.

The Dutch maestro motored forward effectively as he performed the role of a false-centre back, but his tendency to burst upfield far too occasionally caught him out of position when Kyiv lashed out on the counter. Still, the 23-year-old’s innate capacity to thrive in various positions and versatility as a player make him an undeniable asset in the current squad.

The speed demon produced a dynamic display down the left-hand side as his partnership with Ansu Fati caused quite some trouble to Dynamo Kyiv’s right-back, Tomasz Kedziora.

However, it could well be argued that – similar to his full-back partner in crime – he was wobbly in the defensive third, with the opposition’s quick transitions catching him off guard. Having won none of his defensive duels, he was more of an influence upfield than at the back.

Controlling the game from the base of midfield, Sergio Busquets looked considerably effective in possession, as opposed to his previous outing against Alaves. The ageing veteran’s partnership with Miralem Pjanic helped the Catalans build plays with efficiency, but his aptness to drift towards the wider areas of the field often left the center of the park exposed.

As Barca approached the end of the game, Busquets was brought off for Clement Lenglet with Frenkie De Jong occupying his position in midfield.

The Bosnian midfielder repeatedly recycled possession and was a reliable figure on the ball due to his wide array of passing skills. Even so, Miralem lacked that drive and mobility he displayed against Juventus and even Alavés.

He frequently released the ball at imprecise moments, unintentionally ignoring players in substantially fruitful areas. Notwithstanding he is capable of much better, Pjanic warranted the right to start against the Blaugranas‘ upcoming opponent, Real Betis.

Scoring from the spot in his third consecutive Champions League game, Lionel Messi is yet to score a goal from open play this campaign. Although the Argentine talisman once again seemed highly ill-fated in the final third, he came ever so close to scoring from a free kick with a shot landing in the top corner.

Woefully, Ruslav Neshcheret had other plans as he made a diving save to prevent Lionel from finding the back of the net. Messi managed to get himself on the score-sheet, but he lacked a considerable amount of influence having been situated on the right flank.

His natural proclivity to drift in the centre usually left the right-hand side unoccupied. Added to that, he seemed to be preserving energy as the game neared its closure, which shouldn’t come as a surprise given the 33-year-old has been gravely deprived of rest this season.

The 17-year-old gem arguably produced his most underwhelming display in an Azulgrana shirt as he struggled to assert his dominance in the centre of the park. In spite of hitting the crossbar very early on in the game, his presence began to gradually fade away.

Pedri as always squirmed out of pressure situations with extreme efficiency, but he did not pose a major threat to Dynamo Kyiv’s stiff back-line. After an immensely meteoric rise in the starting XI, it’s fair to say the boy is still a work in progress.

Ansu Fati failed to rattle the back of the net as he is so used to doing at this stage of his career, but it was still an impressive performance from the La Masia prodigy, who dribbled past players with utmost ease and comfort. Challenging Ruslav periodically in the first half, he always proved to be a threat in the final third.

What was most remarkable in Fati’s gameplay was his positional proficiency as he never stuck true to one specific area of the field. Subsequently, Fati claimed an assist through a wonderful cross to Pique, which saw his side extend it’s 1-0 lead. Showing no signs of slowing down, Barcelona must certainly count on him in the upcoming encounter with Betis.

Griezmann’s grieving form at the Camp Nou is turning out to be a subject of great concern. After a couple of dominant displays on the road, the World Cup winner fell back to square one against Dynamo, looking ever so lost on the pitch.

The Frenchman had the perfect opportunity to score early on in the game with an open net ready to be savoured on but somehow sent the ball wide, wasting a chance that had, truthfully, been offered on a silver platter.

Ever since that miss, his teammates hardly ever looked in his direction as he struggled to affect the game in an impactful manner. With only 29 touches on the ball, the former Atletico Madrid sensation was brought off in the 59th minute.