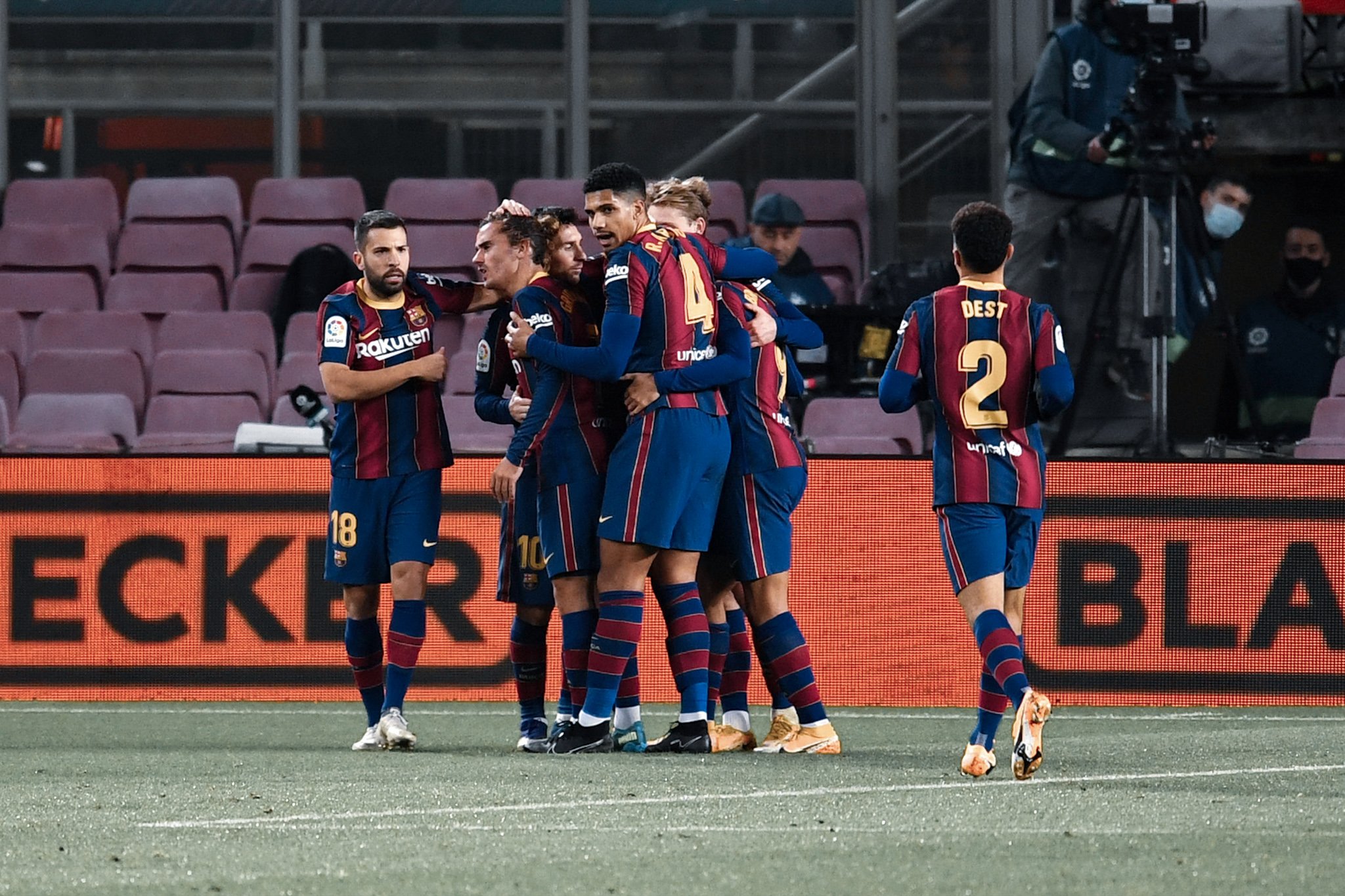 An exceedingly hard-fought win at the Camp Nou against Levante sealed the 3 points for Barcelona as Ronald Koeman’s side now prepare for a far more demanding opponent on the road: Real Sociedad.

While the Blaugranas struggled to break down the Granotas‘ immensely efficient low block, a few prominent individual performances helped the club salvage a victory. Despite width also direly lacking in the starting XI, the fact that Barca could deploy numbers up front without having to worry about defensive exploitation in the second half paved the way for Lionel Messi’s goal in the 76th minute.

Made a top-notch save early on in the game to prevent Jorge de Frutos from taking the lead. He may have been minimally tested in goal. Still, the German shot-stopper ensured that the Catalans did not concede goals from dangerous opportunities that were given away due to poor positioning of the defenders. Ter Stegen was reliable as ever between the sticks.

Reliable in his positioning but also providing reasonable support down the right flank, the former Ajax boy produced a satisfactory performance. His cross to Coutinho in the first minute of the game opened up the floodgates for a greater amount of chances to be created.

Dest’s wonderful ball control and dribbling paired with his sensible crossing has assured that Barça are able to create some sort of offence down the right flank. The 20-year-old may not have made much of an impact on this game, but his sheer presence is a major upgrade for the Catalans over the mediocrity they have been a witness to over the years in the right-back position.

Having been gifted complete ownership of the right flank once again, the American sensation marauded up-field with a great deal of conviction.

The Uruguayan ensured that the Catalans had a well-grounded defence; he played with the aggression of a raging bull, using his sheer physical presence to win back possession for the hosts. Araujo was robust in his tackling. Furthermore, he won the majority of his headers. With effective anticipation of strikers and excellent awareness, while committing challenges, the 21-year-old proved why he should be a recurring member of the starting XI. This is the sort of gritty strength that Barça need if they aspire to become a respectable defensive team.

The Frenchman was a liability and had a catastrophic performance in the First Half. Getting caught out of position frequently and failing to track runs of the nifty Levante forwards, he also missed a sitter where he somehow struck the ball over the bar cheaply. However, to the 25-year-old’s credit, there was a noticeable improvement in his game in the second half. He was more assured in his tackling, made some vital interceptions and did not repeat his errors in positioning.

With the exception of Alba’s usual link-up plays with Leo, he was mediocre in the final third and failed to utilize all the space on the left flank to create a substantial threat. Continuous criticism of Alba is that he ordinarily refuses to cross the ball to anyone but Messi, and this was most certainly the case once again. As for his defensive performance, this was one of his better games in that regard. The 31-year-old tracked back frequently to ensure that the Blaugranas were able to retain some sort of defensive shape. Jordi has certainly been below par as of late and needs to step up as the club enter the crucial stages of the season.

The Dutchman was all over the pitch, covering large distances, pressing to win the ball back, and more importantly, showing courage in possession. Against a low block that required dynamism, De Jong was not afraid to play more like himself and take on defenders rather than continuously look for the safer option.

With 5 key passes, 6 ground duels won and 55 accurate passes, the former Ajax prodigy was awarded with an assist in the closing stages of the game as Messi converted the chance, immediately then thanking de Jong for his innate vision.

Sergio Busquets maintained excellent composure from the base of midfield, not proving to be a hindrance for De Jong and recycling possession effectively. Although he was a reliable outlet on the ball, his tendency to decelerate it’s movement often made plays predictable.

With far more zestful players at Ronald Koeman’s disposal, it may finally be time to lower Busquets in the pecking order.

Philippe Coutinho was played in his preferred role, on the left side of a midfield-three, yet was one of Barça’s most ineffective players upfront. The Brazilian demanded far too much time and space on the ball to make a considerable impact and was particularly inept in his decision making.

Coutinho’s recent slump is worrying to watch, but it certainly proves that he no longer warrants an out and out opportunity in the starting XI.

Griezmann appeared to have been situated on the right flank, but had a promising performance, despite playing in unfamiliar territory. In addition to frequently testing Aitor Fernandez — who had his habitual masterclass against Barça —, he even produced 4 key passes.

Griezmann’s vital turnover late in the game that led to Messi’s goal paid testimony to the fact that the World Cup winner’s sheer persistence and determination on the field was second to none. A display that may go under the radar, but highlighted the Frenchman’s brilliant work ethic and mindset.

After taking multiple attempts at goal and troubling Aitor on various occasions, Lionel Messi finally etched his name on the score-sheet in the 76th minute of the game, scoring the only goal of the night. With a well-placed finish as he took aid from the far post, Messi capped off a compelling performance.

The Argentine enjoyed a dominant game, despite mostly being hunted down by the Granotas whenever he received the ball. Leo waltzed his way past Levante’s rigid back-line frequently and a goal to bag all 3 points is the least he deserved.

Having been situated on the left flank, Braithwaite struggled to offer width continuously and stretch the opposition. Koeman attempted to accommodate Coutinho by employing the Danish forward out wide, but this reduced Martin’s influence drastically.

Nonetheless, Braithwaite played a silent, yet valiant cameo, linking up well with the front-line and exhibiting some darting runs behind Levante’s defence.