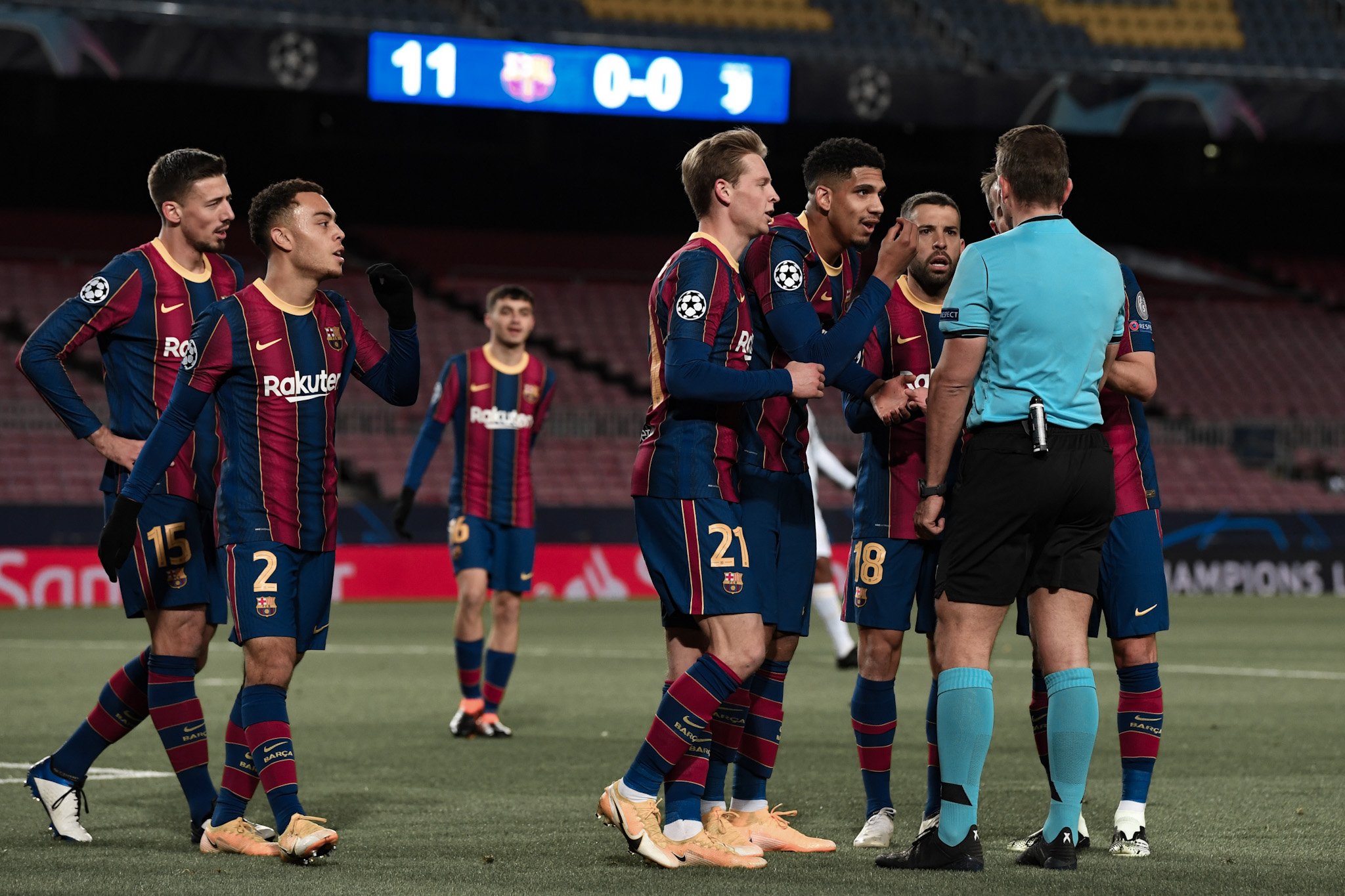 Barcelona lost for the first time in the Champions League at the Camp Nou since 2013. However, the performance was something that has become all too familiar for Culés. A one-man team consisting of Lionel Messi fought against all the odds as the rest of the Blaugrana players stood and watched. The only other positive from the match was the impressive cameo from Riqui Puig in the second half.

Individual mistakes and performances cost the home side once again. Particularly in defence, mistakes have been occurring too often and there is a lack of organisation. Two penalties were given against the Catalan side which could have been prevented. Juventus also found themselves completely unchallenged in the box for their second goal and almost had a fourth, but for a tight offside.

Though the Spanish giants had the majority of possession and created more chances, they relied too heavily on Messi to do everything. The players were unable to find him in dangerous positions and were too static when the Argentine did collect the ball. Barcelona’s captain was the only player to register a shot on target against the Italian side on Tuesday evening.

The German goalkeeper was left almost helpless by his defence again this campaign. Ter Stegen was not at fault for any of the goals as his side conceded two soft penalties and failed to mark Weston McKennie. Apart from that he pulled off one fantastic save then was rarely troubled. His distribution was poor for his usual standards, only completing 75% of his passes.

Sergiño Dest has made quite an impact since joining Barcelona this season. The full-back has been one of the best Barça players of the campaign and has produced several memorable displays. Against Juventus, Dest was quieter and struggled to make a significant impact of the fixture.

In the first period, he worked hard off the ball, having some success going forward at times. The combination of the former Ajax player and Francisco Trincão did not seem to work. Antoine Griezmann was moved out wide at half time and played in front of Dest. This was even less effective as the right-wing for Barcelona created nothing and the 20-year-old featured very little from here on out.

The Uruguayan centre-back returned to the starting 11 after an injury had ruled him out for several weeks. Araújo suffered an early set-back as he was deemed to have obstructed Cristiano Ronaldo in the penalty box. It was a soft decision from the referee to award the penalty and this seemed to shock the home side. Barça’s number four recovered slightly and showed his aerial dominance and pace.

The partnerships he former with Clément Lenglet and Samuel Umtiti showed their lack of chemistry together. Araújo was the more solid of the three, but the lack of organisation was unacceptable at this level. As Umtiti overcommitted, and Lenglet was caught out of position, it left huge gaps in the defence for the relatively inexperience 21-year-old to cover.

The Frenchman is the latest Barcelona player that has lost all of their form and confidence. With Gerard Piqué out injured, Clément Lenglet should be the one leading the back four. This is far from the case as he has made too many mistakes in recent games and it is costing his side.

Against Juventus, Lenglet had another night to forget. He was substituted in the second half due to being on a yellow card, with it looking more and more likely he would receive another. The former Sevilla defender lacked any composure and recklessly ran around chasing shadows. His body language is worrying too, as he walked around with his head held down. The defender has to put these performances and mistakes behind him quickly as Barça are relying on him.

Another player that had to be substituted to protect them from receiving a second yellow card. Jordi Alba made his usual attacking runs from deep, timing them almost perfectly. He found his usual target in Lionel Messi with a couple of crosses but the Argentine was unable to convert the chances. It is difficult to find any other positives from his performance given how bad the Blaugrana were in the first half. The Spaniard is still a long way away from his best form.

Facing his former club, Miralem Pjanić should have been desperate to make an impact on the match. The Bosnian was disappointing though, offering very little apart from some tame shots and uninspired passes. In the first period, Barcelona were dominated by their opponents and as the match went on, Pjanić became less interested.

After arguing that he deserved more minutes in an interview before the game, his performance will not convince anyone of this. His defensive contribution is minimal too as he made just three interceptions, zero tackles, zero clearances, lost all six of his aerial duels, lost two out of three ground duels and lost possession nine times. As part of the double pivot, a better defensive output is required.

Frenkie de Jong was slightly better in midfield and tried to drive his team forward. The 23-year-old was energetic and worked hard on and off the ball. He covered the ground well and tried to find penetrating passes and get his team forward. De Jong looked like the only one that was able to find his captain in dangerous positions.

However, the Dutchman has not hit the heights he showed he is capable of at Ajax. Barça’s number 21 is struggling to produce his best form in a system that has not worked since his arrival in 2019. Though Ronald Koeman has changed the formation, and de Jong is playing in his favoured double pivot, the midfield is not working at all this campaign.

Francisco Trincão looks to be another Barcelona player joining the long list of those that have lost their confidence. There is no doubting the talent that the Portuguese winger possesses, but his recent form is worrying. Trincão looks lost out on the pitch and does not know his role in the team yet. There are flashes of nice touches and skill, but his effect on the game is resulting in very little. He sometimes tries to do too much as he fights to impress the manager.

On Tuesday evening, he was replaced at half-time which will not do his confidence any good. The 20-year-old must not let the affect him and continue to keep working hard. He is still adapting to the club and should be given more chances as there is potential in him.

Ronald Koeman’s favourite started the season so brightly, but has crashed in recent weeks. Pedri was deployed on the left wing against Juventus and looked out of his depth. The 18-year-old did very little to influence the match and looked worn out from being overplayed both mentally and physically.

In the 66 minutes that he played, Pedri only managed to complete 26 passes, lost the ball ten times, produced zero key passes, zero shots and completed none of his two attempted dribbles. Playing the young Spaniard on the wing is clearly not getting the best out of him. He must be rested more and return to the centre of the pitch where he is most comfortable. Being Koeman’s favourite is not doing the midfielder any good at the moment.

Another disappointing display from Antoine Griezmann as he showed again that he cannot play with Lionel Messi. The two fight over the same space and there will only be one winner in this contest. The Frenchman does not seem to show any initiative in finding other spaces and he was completely static upfront in the first-half. Playing him as a striker causes Barcelona more problems than it solves.

It seems his lack of versatility means he should only play in the number ten role or not at all. Though producing some better performances recently, as soon as he moved to the striker role and then on the wing, his confidence was instantly gone. The former Atlético Madrid star had a couple of decent chances which he failed miserably with.

The best player on the pitch last night, Lionel Messi was, once again, deserted by his teammates on the big occasion. Messi was the only threat going forward that the Catalan side had and was criminally given the responsibility by his teammates to create everything. The 33-year-old was the only Barcelona player to register a shot on target in the game while creating everything too.

It is difficult to watch as the Barça legend produces incredible displays but is let down by his team. He has carried the club on his shoulders for too long and nobody has supported him. Messi never gave up until the final minutes, but it is clear the Argentine is unhappy with having to unlock defences by himself every week.

When the Dane was introduced at half-time, Barcelona managed to create a lot more. Having that natural number nine made a lot of difference and created more space for others. Braithwaite was a lot more effective than Antoine Griezmann in the first-half and his movement was much better. He worked hard, pressing the opposition and looked determined to get his side back in the game.

Though only playing for 25 minutes, Riqui Puig showed why he should be the first midfielder on the team sheet every week. He did more than any other Barcelona player on the pitch, except Lionel Messi. Puig had more touches and accurate passes in his short cameo than any Barça forward, except his captain again. The Spaniard also made more ball recoveries than any of his teammates with six. Finally, he provided more key passes than the majority of his teammates.

It is not just the statistics that make the 21-year-old look so promising. When Puig plays, he lifts the whole team and can take some of the creative responsibilities from Messi. Ronald Koeman must see this now and include the midfielder in his line-ups far more often.

That brings an end to our player ratings for the Barcelona 0-3 Juventus game in the last game of the Champions League Group G.