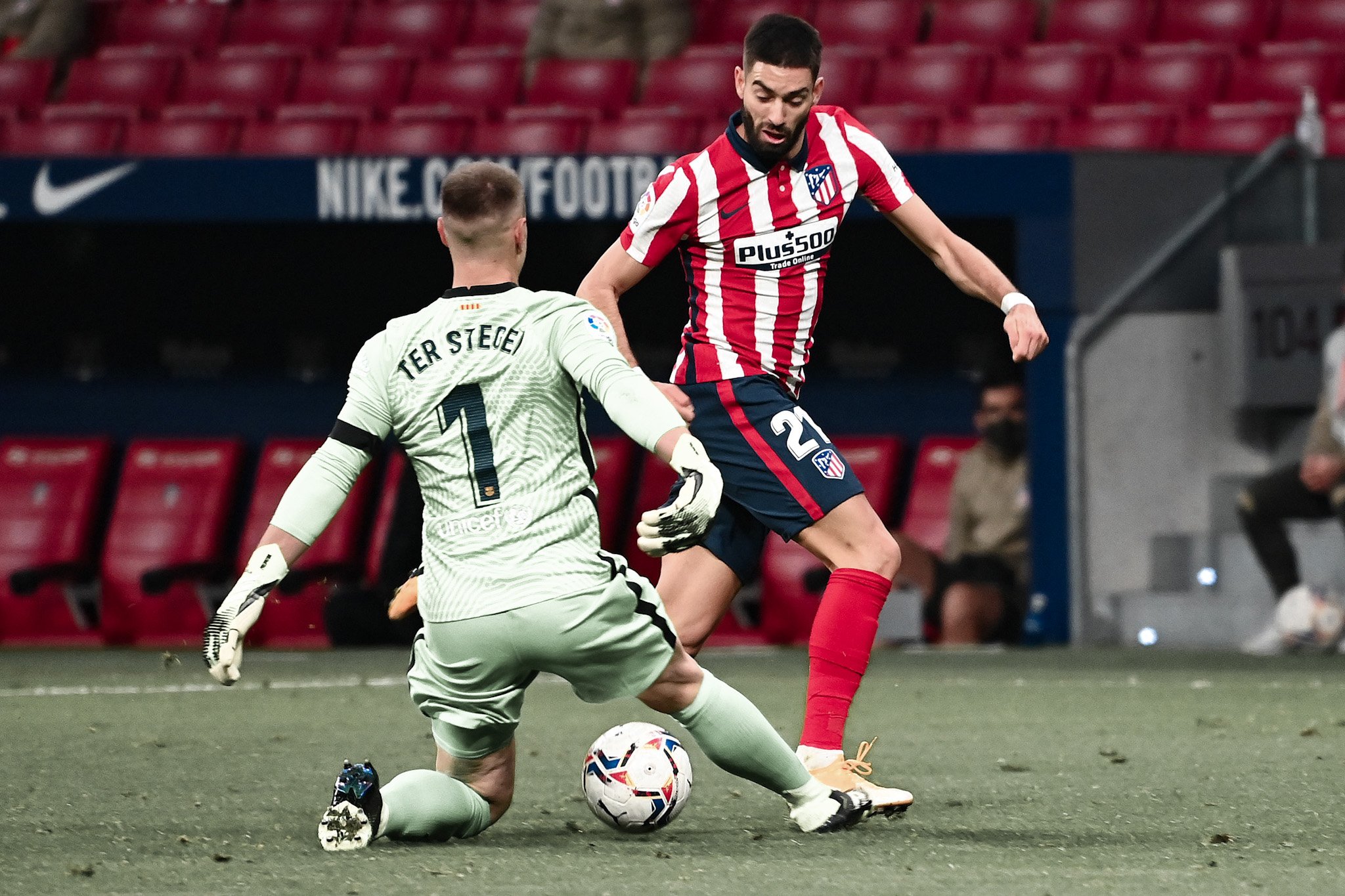 A tightly contested fixture, which comprised of lengthy spells of possession from Barcelona and effective counter-pressing, but in the end, an old school Atletico Madrid were repaid the 3 points for their diligent defending and maximized discipline at the back.

Diego Simeone’s side persevered in patience and made the most of Ter Stegen’s error in the first half. After taking a long-awaited lead, the remainder of the game proved to be a stroll in the park for Los Rojibloncos

As Barcelona continue to worsen their situation in the league, concerns are mounting over the effectiveness of the 4-2-3-1 formation and the use of personnel by Ronald Koeman, who has had a tough start to life in Catalonia. In an unconvincing and dismaying 1-0 defeat, here’s how the players fared at the Wanda Metropolitano.

An unmemorable performance from the German, who’s uncharacteristic decision making cost Barça a match-defining goal. To Ter Stegen’s credit, he made a marvellous save from Saul’s shot early on in the game. However, his error of judgement in the concluding stages of the first half gave away the goal as well as any chances of securing a point from a hard-fought fixture for the Blaugranas.

Did a solid job at defending, distributed the ball well and maintained impressive link up plays with Dembélé down the right flank; The 28 year old Spaniard delivered a commendable performance. As per usual however, he did not maintain a balance between pushing up and staying back, often getting carried away with Barcelona’s lengthy spells of possession, which resulted in tons of counter attacking plays for Atletico down their left flank.

Piqué sulking off in tears after taking a brutal blow to the knee added to the anguish that the Culés had suffered throughout the game. However, as painful as it was to witness the Spaniard go through so much agony, Piqué did not play quite like the tactically smart centre-back he has asserted himself to be.

Out for a few months, at the very least. (Photo by GABRIEL BOUYS / AFP)

While the 33-year-old may have made a couple of brilliant tackles, it has to be said that his positioning at times was exceptionally substandard. Atletico’s bloodthirsty forwards pounced on the Catalans whenever an opportunity to burst forward arose, capitalizing on Geri’s inept positioning in the closing stages of the first half as Ter Stegen rushed forward to fill in for his absence.

The Frenchman had an admirable exhibition. Lenglet made little to no mistakes in his positioning and was reliable as always in winning his duels. In fact, this time around, he even succeeded at defending crosses which is known to be an area of weakness for him. However, had he made the most of a Messi cross by placing his header at either side of Oblak in the second half, Barça could have salvaged a point from this challenging fixture.

The Spanish left-back had a satisfactory performance. Although Jordi Alba was scarcely troubled on the defensive side of the field down the left flank, he proved to be a principal source of threat for the Catalans down a vacant left flank, marauding up-field with pace and assurance. The 31 year old also created a momentous opportunity for Messi through an immaculate through pass, but to his dismay, the chance was left begging.

Replacing Sergio Busquets in a clash of such stature is not a task for the fainthearted, and Miralem certainly had a displeasing game in accordance to his standards.

While the Bosnian constantly kept things moving and recycled possession on a few instances, he did not offer a considerable amount of defensive solidity or pose any threat moving up-field. His traditional long balls were nowhere to be seen, but in his defense, lack of runners and stiff off the ball movement always led to him searching for opportunities that never truly presented themselves.

Although De Jong was devoid of any medium of spark or creativity, the Dutchman distributed the ball adeptly and fulfilled his obligations with relative ease; it was his reliable figure on the field that allowed Barça keep a stronghold in possession.

Frenkie’s defensive assiduity was also an applaudable facet of his gameplay as he emerged successful in 6 out of 8 ground duels and won his only aerial duel.

The Frenchman arguably produced one of his most encouraging performances against a low block this campaign. In spite of often being accused for his lack of discipline and inept awareness in possession, Dembouz was one of the few players posing a threat to Atleti’s rigid back-line, making runs behind the defense and providing a sense of flair.

Dembele brought life to the right flank, for 45 minutes, at least. (Photo by GABRIEL BOUYS / AFP)

Of course, it was by no means an exemplary display, especially considering his impact severely lessened after proceedings. Still, signs of improvement are visible, and consistent game time is surely going to help him regain his rhythm.

Griezmann’s homecoming was yet again marred with an unsatisfactory performance as the Frenchman withered into an uninspiring figure on the field. Struggling to provide that killer pass or situate himself in prominent goalscoring positions, the 29-year-old was just another deer caught in the headlights.

After a promising display against Real Betis in the League and a fairly influential international break, the World Cup winner failed to do his immense status justice on the night it mattered most. Without Simeone’s commanding figure comforting him from the sidelines, he proved to be a pale shadow of his former self.

Ronald Koeman’s fascination for Pedri has unquestionably bore the club fruit on various occasions this season, but on this particular occasion, against a side that were physically robust and unforgiving, Barcelona’s gem struggled to impact the game in any way whatsoever.

Pedri was clearly suffering the consequences of football’s demanding schedule and having been surrounded by at least 2-3 Atletico players whenever he received the ball evidently deteriorated his influence.

As was the case in the Clásico, Pedri failed to stretch the oppositions adeptly and was physically outmuscled. It’s vital for Koeman not to overburden the youngster and ensure his development is steady; as meteoric as his rise maybe, he is still a work in progress.

Failing to mirror his performance from the last time he faced Atletico at the Wanda, Lionel Messi was effectively contained by the compact Atleti defence, which disabled Leo from rising to the occasion and stealing the headlines.

The Argentine was one of the Blaugranas‘ few defining threats in the final third, but as his attempts were usually marked with failure, Barça’s talisman had an underwhelming day. Whether Messi feels fatigued or has lost the will to play for the club, one can safely deem this version of the South American to be his most ineffective in recent times. Then again, at 33 years of age, expectations must gradually be lowered from the ageing veteran.