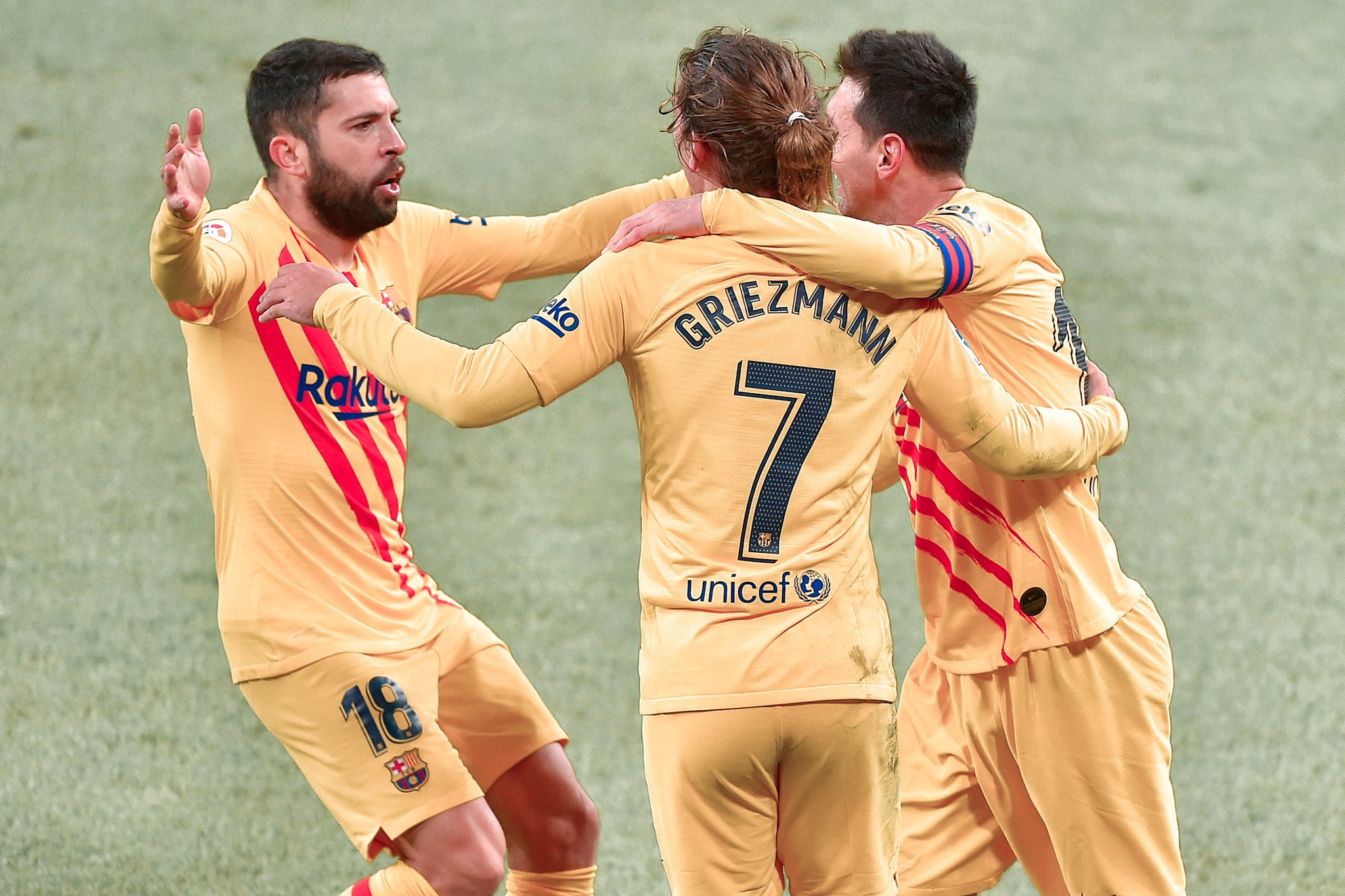 Despite Athletic Bilbao giving Barcelona a scare in the closing stages of the game, Barcelona cruised to victory at a stadium where they have recently not found much success, making huge strides in hostile territory. The Blaugranas managed to immediately comeback after going 1-0 down with their elevation in mentality visible throughout the game.

Individually and collectively, the club were in sync for large portions of the game and the ascendancy displayed by Koeman’s men managed to pay them dividends at the full-time whistle as they now climb up to third place in La Liga.

Ter Stegen was forced to pay the price for Barcelona’s defensive calamities on two separate occasions, but while he was not at fault for the goals Barça conceded, the German could have certainly done a better job at denying Iñaki Williams from scoring the opener.

Sergiño Dest’s responsibilities were reduced drastically with the inclusion of Ousmane Dembélé on the right flank, which allowed Dest to cover up for the defence on a frequent basis. Nonetheless, it could be argued that the American was caught high up the pitch for Los Leones’ opener. Added to that, Dest also missed a prominent opportunity to score after forcing a save out of Unai Simón.

Ronald Araújo proceeded to be a rock wall at the heart of the defence, making up for Piqué’s absence seamlessly. The Uruguayan centre-back looked slightly shaky with his distribution, but maintained remarkable composure at ground duels and emerged successful aerially as well. Araújo’s setback against Eibar was simply a setup for his awe-inspiring comeback, which begs the question, does Barcelona really need Eric Garcia?

Clement Lenglet was scarcely tested in the air and did not fare well in a majority of his aerial duels. Additionally, the Frenchman was partially at fault for Athletic’s opener as his sluggish reaction to Iñaki William’s change in direction enabled the forward to put his side upfront. Having picked up an unnecessary yellow card to top off a subpar performance, Lenglet is also now suspended for Barça’s upcoming clash.

Jordi Alba was bursting with energy, bombing down the left flank occasionally and proving to be a reliable outlet in the final third, giving the visitors a numerical advantage. Albeit the Spaniard had a few lapses in concentration at the back, he quickly made interceptions and anticipated the threat Bilbao’s nifty forwards carried.

Starting at the base of midfield, Busquets was arguably one of the few weak links in the team. The veteran was largely at fault for Iñaki’s goal and was moderately involved in the Catalans’ counter-pressing. Although Busquets gradually grew into the game, winning 5 duels defensively –, age appears to be taking its toll and doubts of him being able to start games consistently for the full 90 continue to loom over him.

No longer does Frenkie de Jong exhibit his innate abilities in purple patches; the Dutchman has finally found his groove again, producing displays with applaudable consistency. De Jong was as per an engine in midfield, covering large distances and surging forward tirelessly. The former Ajax prodigy was repaid for his efforts in the first half as he picked up an assist for Pedri’s goal, reading Messi’s excellently executed cross with a touch of class.

Pedri has given 26 key passes this season. Only one Barça player has more (Messi, 35).

The boy from Tenerife was arguably Barcelona’s most impactful player after Lionel Messi. Pedri, despite being a mere 18-year-old, played as if he had played the beautiful game for decades. In addition to scoring Barça’s equalizer with a simple header, he was instrumental in Messi’s goal, with his trademark back-heel once again highlighting his telepathic connection with Leo. Pedri’s ability to be involved in every meaningful play for the Blaugranas signifies the youngster’s tremendous talent – truly a sight for sore eyes.

In spite of not finding the back of the net, Dembélé waltzed past Berchiche and Balenziaga at the speed of light, taking on defenders continuously and always accelerating the flow of the game in moments where Barça would find themselves trapped in a stalemate. The Frenchman astonishingly won 7 out of 8 ground duels and made possession purposeful for the visitors, forming a formidable partnership with Sergiño Dest.

Unplayable and unparalleled in terms of quality on the field, Lionel Messi was simply the star of the show. Producing his best game on the road this season, the Argentine was involved in practically every Barça attack. Leo’s mesmeric pass to de Jong helped his side equalize, he went onto wreak havoc himself with two sublime finishes. Although Leo made a cheap dispossession which enabled Athletic to score their second goal of the game, his outstanding exhibition was enough to overshadow that uncharacteristic error in judgment.

Lady luck unfortunately was quite harsh with the number 10 as he hit the crossbar on two occasions and had one of his goals ruled out, but it was an immensely encouraging performance from the captain, who is now back to doing what he does best – scoring goals and tormenting oppositions.

Berthed on the left flank, Griezmann had to adapt to unfamiliar territory, but he did a fairly decent job throughout the game. With admirable off the ball movement and an excellent work ethic, the Frenchman made a whopping eight recoveries, more than in any other game for Barça in all competitions. After doing a considerable amount of the ‘dirty work’, Griezmann was then awarded with an assist to Lionel Messi in the second half as the duo embraced with gleeful faces.