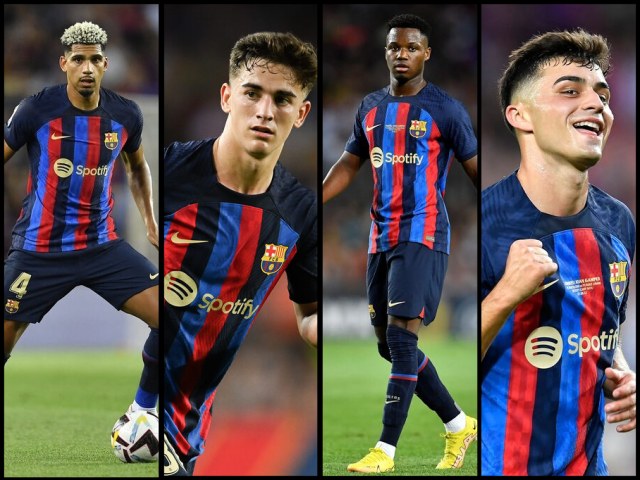 While Tuesday night might have ended on a disappointing night for Barcelona supporters, they were greeted with a big positive update on Wednesday morning as the club officially announced the contract extension of Gavi.

The 18-year-old wonderkid had been in the final year of his contract and even though it was known that he would be penning a renewal, an official update on the matter was awaited for a while now and finally arrived earlier today.

Gavi has added four more years to his contract with Barça, prolonging his stay at Spotify Camp Nou until 2026. His renewal is another step in the right direction for the club as they continue to secure the long-term futures of youngsters around whom the team will be built going forward.

Indeed, in the past 12 months or so, Barcelona have managed to tie down four key youngsters to long-term contracts as they prepare the core of the team that can dominate European football in the present and the future.

Pedri was the first of the aforementioned four young players to be given a new contract. Just 19 years old, he is already considered one of the most gifted midfielders in the game and Tuesday’s performance in the defeat to Bayern was more evidence of world-class quality.

After a stunning debut season in 2020/21, the teenager was rewarded with a five-year contract in October last year that will keep him at Barcelona until 2026. The deal comes with a massive release clause worth €1 billion.

A week after Pedri’s contract extension was announced, Barcelona tied down Ansu Fati to a new deal as well. Having shown tremendous faith in his potential by handing him the #10 shirt, the Blaugrana doubled down on it by handing him a long-term contract.

Fati’s new contract, signed in October last year, runs until the summer of 2027 with Barça retaining the option of extending it by two more years. Like Pedri, the La Masia graduate is also protected by a €1 billion buyout clause.

The oldest player among the quartet, Araujo is already recognised as the leader of the Barcelona defence after his exceptional performances over the past year.

And, it is why the Catalans extended his contract as a priority in April earlier this year. The 23-year-old has committed his future to the club until 2026, with his new contract containing a release clause worth €1 billion.

The latest of Barcelona’s crown jewels to ink a new deal, Gavi turned 18 only a month ago but is already a key component of Xavi’s Barcelona. Like Araujo, he too has signed a four-year contract that will keep him at the club until 2026.

And the 18-year-old sensation has also been shielded by a €1 billion release clause like Pedri and Ansu Fati, indicating how highly Barcelona rate him.

All the aforementioned players are still very much at the fledgeling stages of their careers but have demonstrated exceptional quality and potential.

Throw in the likes of Eric Garcia and Nico Gonzalez, who are also contracted until 2026, and Alejandro Balde, who has two years left on his deal and the future certainly seems bright for Barcelona.