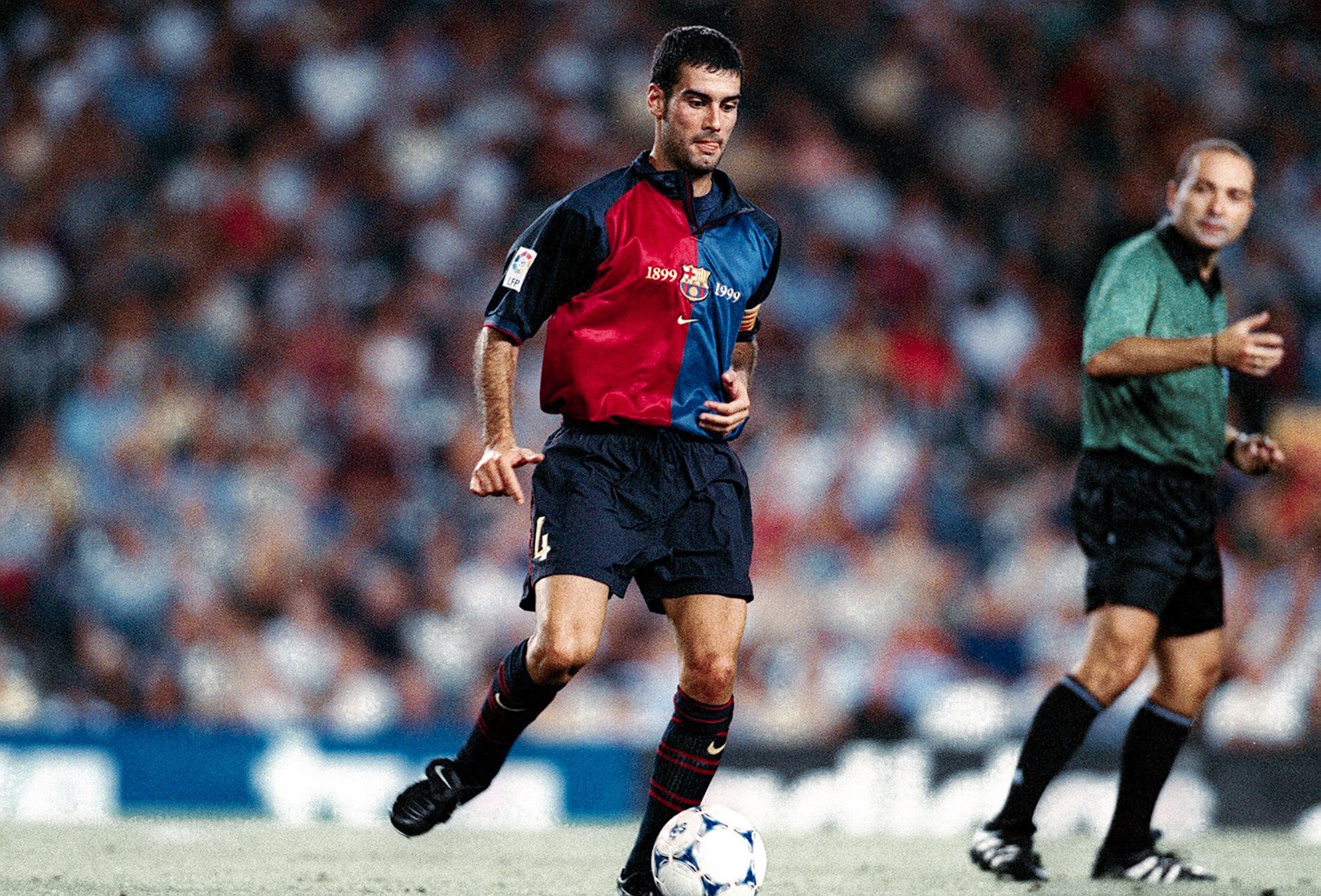 As a diminutive Lionel Messi headed in a cross from Xavi, the fate seemed to be sealed. It was in Rome that Barcelona announced themselves as supreme. It was in Rome that football fans across the world saw Pep Guardiola mastermind a meteoric revolution that would change the course for modern football itself, but the revolution had begun brewing years before Guardiola ever became a manager.

Living in Santpedor, around 70km away from Barcelona, Josep Guardiola was a skinny little boy with a penchant for football. Even as a youngster, everyone could see the skills he had, his passing and his ability to control the game, for his age, was exceptional.

To avoid any quarrels, little Pep would take the lead, and be the one to distribute the teams to divide them as equals. He was like a sponge — he absorbed information from wherever he could. It is no surprise that Barcelona came calling a few years later, as he represented the very core of La Masia at that point.

In La Masia, Pep became more inquisitive and would take in as much as he could from his surroundings, learning the very principle that would serve him well years after — take the ball, pass the ball.

The story of the treble is long; one that starts with Johann Cruyff first noticing Guardiola with the B team. (Photo by LLUIS GENE/AFP)

Growing up, he remained skinny with little mass, so he had to develop his game uniquely. His technical ability was second to none, finding players behind with his passing and vision from profound positions on the pitch. It was probably this ability that piqued the interest of none other than Johann Cruyff as well. Phil Ball takes us back to the very moment that happened, through his book, Morbo: The Story of Spanish Football:

“In his first week at the club, Johan Cruyff turned up unannounced at the “Mini” stadium, a venue just down the road from Camp Nou used by the youth and B teams. Just before half-time he wandered into the dug-out and asked Charly Rexach, the youth team manager at the time, the name of the young lad playing on the right side of midfield. “Guardiola — good lad” came the reply.

“Cruyff ignored the comment and told Rexach to move him into the middle for the second half, to play as a pivot. It was a difficult position to adapt to and one not used by many teams in Spain at the time. Guardiola adjusted immediately, as Cruyff had suspected he would.”

When Cruyff finally needed a holding midfielder for his Barcelona side in 1990, he looked no further than Guardiola. Even though he had a lean frame, the Dutchman trusted his ability to read the game and his technical skills enough to hand him a debut.

Pep might’ve hoped to start off on a good note, but he ended up with a chasting review – “You were slower than my grandma!” said Cruyff at half time. It was the beginning of Cruyff’s tutoring of the Spaniard. While the Dutchman was often harsh with his words, it was Guardiola’s steely determination and work ethic that kept him going.

Cruyff would argue a good player does not need to have the best physique — he may overcome that difficulty in other practices. It was under the legendary manager that Pep learnt how to beat players more powerful than him in the air, and how to use his weaker left foot when under pressure from the opposition.

That said, Guardiola managed to clock no more than 3 first-team appearances his debut season, but Cruyff had seemingly decided that nobody else would be at the helm of his midfield, the very core of the Blaugranes. It was not just his technical ability that stood out to Cruyff, but also his ability to communicate to his teammates, even his seniors. Guardiola stood strong and capable as a leader even as a 20-year-old.

In one of the matches, Guardiola told Michael Laudrup, a player much senior to him, to “keep it simple” after Laudrup attempted to take on a player too many, as mentioned by Guillem Balague in his book, Pep Guardiola: Another Way of Winning. It was clear that the Spaniard was unafraid of confrontation and would speak his mind regardless of who stood before him.

The fact that he was able to keep a stable head on his shoulders at all times helped in his rise, which was nothing short of meteoric. Within two years, he saw himself as the holding midfielder of Barcelona. His touch, his spatial awareness, his talent for spotting the right pass and his ability to set the tempo of a match did not go unnoticed. He embodied the Cruyff principles and became the star of and from La Masia.

Moreover, he was the beginning of a series of players, and more specifically midfielders who carried the same principles — Xavi, Cesc Fabregas, Andres Iniesta, Sergio Busquets amongst the biggest names cropping up from La Masia in recent years who carried the learning in them.

By 1994, Guardiola had established himself as the conductor of Barcelona’s play. He moved around the ball seamlessly for his teammates, and over the years, he had developed his awareness which made him a wall in the heart of the midfield.

Pep played with some megastars at Barcelona. (Photo via Imago)

He intuitively knew when and more importantly, where the turnovers were going to occur. His ability to win the ball back and orchestrate the attacks from deep was probably the tone that was set two decades later for Sergio Busquets. While Busquets proved himself to be more capable physically, the methodological principles and positioning he has are verbatim from the Guardiola textbook.

After a great run of 11 trophies, the most for Barcelona at the time, Cruyff’s tenure had come to an end by 1996, but the postulates he had set were still there instilled within Pep Guardiola. It was after Cruyff left, though, that Pep honed his leadership skills even further.

Under Bobby Robson’s management, he met a similar mind in Jose Mourinho, although they would eventually wind up taking very dissimilar footballing paths. In Mourinho, he found a mind just as curious and inquisitive, and the Portuguese became a man he often talked to for hours. At this point, Guardiola started becoming more demanding of his teammates and became more questioning as well.

“This and that and this and that in the dressing room. He made my head spin!” said Laurent Blanc, who was Pep’s teammate in 1996. He was mocking him, but illustrated how obsessive and demanding Guardiola had become by that point.

Guardiola’s stronghold over the dressing room and his demanding front led up to him officially becoming the captain in 1997 under Louis van Gaal. The Dutchman saw the ability of Guardiola to command his teammates regardless of their experience.

“I made Guardiola captain because he could speak about football. He could speak like a coach, even then – not many players can do that. He was younger than Amor and Nadal, but he was my captain. I told him in a meeting that I had chosen him and he said, “It’s not how it happens at FCB, the oldest player in the team is usually the captain here.” But I insisted, “No, you are the only one I can speak to on my level, you are my captain.” He used to tell the other players like Figo where they should be: ahead of him, out wide, where he could play the ball.”

The man with the armband now, Guardiola was more than just a peripheral figure in the dressing room. He had begun to advise his teammates on what they could change, and even went as far as to advise the manager — he was one in the making, evidently.

Over the years, Guardiola’s searching nature and his ability to quickly absorb and implement things had led him down this path. He spent hours understanding the intricacies of the game and his role and learning how he could improve. As a player, he would strive for nothing less than perfection- a characteristic that still serves him well as a manager.

Trophies followed Guardiola everywhere, throughout his life. (Photo via Imago)

It was in 2001 that Guardiola left Barcelona. It had been 11 fruitful seasons as a first-team player. He had played 379 games, and scored just 10 goals but had won 16 titles, which would instil his hunger to win as a manager. He departed not just as a great player, but as a representative of the Barcelona identity in an era where foreign players flooded the club.

The Guardiola storm had started brewing when he was a player. His innate ability to understand the game quickly, and the faith that Cruyff held in him as a youngster shaped the manager he is today. He was restless even as a footballer, constantly thinking about how to improve, and would push his teammates to reach the same level.

Winning was the foremost priority, but it never came at the cost of his principles. The seeds for Pep Guardiola the manager had been sown under Cruyff long ago and the rewards he reaps now are from the very same inquisitive tree that absorbed all it could.