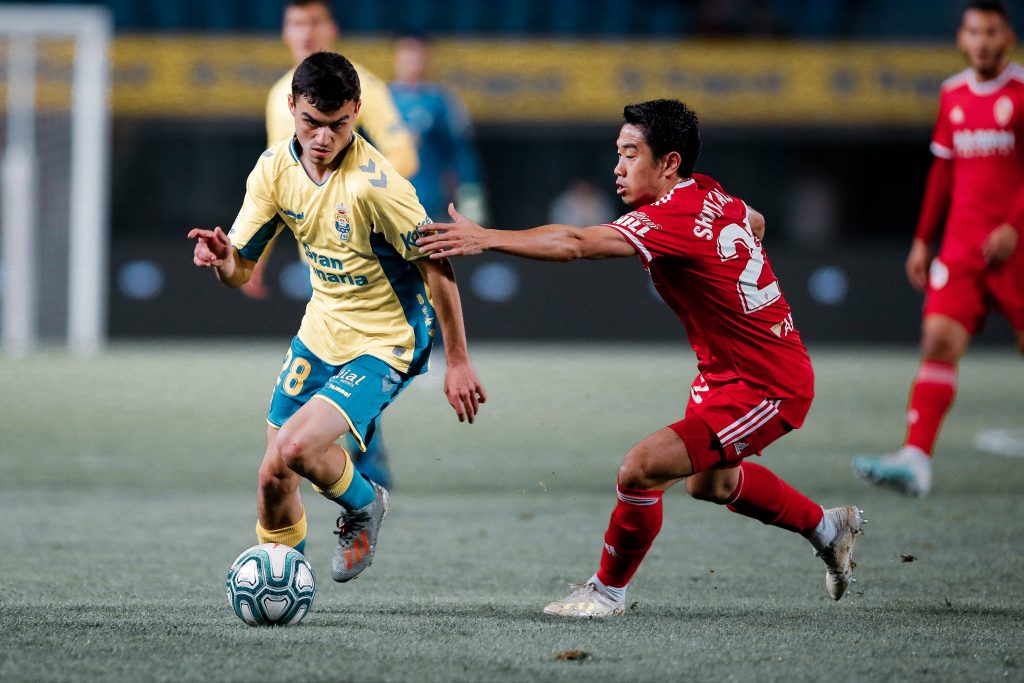 A surprise signing without much speculation surrounding it, as shown in the following tactical analysis the performances of 17-year-old Pedri have been on a different level in recent months and it seems very likely that the Las Palmas player will be a superb signing for Barcelona.

Las Palmas are a team in the Second Division of Spanish football. Standing 9th in the league, the squad has an average age of 28.9 years and the league itself has an average of 27.8. There are many players who are veterans and many who are at their peak in terms of footballing prowess. Las Palmas’ squad is in itself a very competitive one. Among these players, though, one of them has the most minutes played, most assists, most shots assisted, most big chances created as well as the most dribbles completed. That’s Pedro González López or, as he is known, Pedri.

Just 17 years old, but Pedri already is a football phenom. These stats are just the tip of the iceberg for the Spanish youngster. He was signed for 5 million euros in September 2019 by FC Barcelona. His market value has soared since then and the 5 million price tag seems like an incredible bargain now. Pedri’s talents are very apparent to whoever watches him play. It’s no surprise to see the numerous reports saying that he will directly join the Barcelona first team next season at 17 or 18 years of age. In this analysis, we will take a look at Pedri and analyse his performance this season.

Pedro Pedri Gonzalez was born in Tenerife. Situated in the Canary Islands, this forms the biggest island of the archipelago and is known for its dormant volcanoes. Pedri played there as a child, joining CF Juventud Laguna’s youth academy. He impressed the scouts highly, leading to him being signed by Las Palmas in 2018. Roughly a year later, Barcelona confirmed his signing.

He got even better after this, scoring his first goal against Huesca and becoming the seventh youngest player to score in La Liga 2. As the season ended, Pedri had 4 goals and 6 assists for Las Palmas. He started 24 matches out of 36, averaging 79 minutes per match and stayed free of any injury.

“I’m lucky that I failed the trial at Real Madrid; I have now signed for Barcelona.”

Shining at the U–17 World Cup as well, the Spaniard has gone on to prove himself to be one of Spanish football’s brightest prospects. Though he almost joined Real Madrid in the past, he is now a Barcelona player with a release clause of 100 million euros, which is set to increase to 400 million when he plays for the first team.

Pedri is a 174-centimetres tall attacking midfielder who can also play on the wings. He has a somewhat small frame but has excellent balance and is extremely adept at dribbling. A very attacking-minded player, his passing and vision is excellent for his age.

Always ready to take risks and progress the ball forwards, the 17-year-old is also capable in quick link-up play, which makes him threatening on and off the ball as well. Though he is an offensive player, he shows an excellent work rate and tracks back during defence regularly. Along with high-intensity pressing, he is also decent at pure tackling.

“It will be impossible to replace Pedri. He will soon be a star of Spanish football”

For Las Palmas, Pedri played either as an attacking midfielder or on either wing. For Spain’s U–17, though, he was deployed more often on the wings. In Las Palmas’ 4–2–3–1 or 4–4–2 or 4–1–4–1, Pedri’s roles have been somewhat consistent. He has mostly played as a left winger, which his right-footed quick dribbling suits. Switching to attacking midfield even during a match is something he has done often.

The youngster’s technical and passing skills allow him to act as an excellent playmaker as well. Surprisingly, before the last few matches of the season, he had never played as a pure interior at Las Palmas, which is reportedly what Barcelona scouted him for. He has a lot of tactical as well as individual responsibility, which is one of the reasons for his explosive development, as we shall see in this article.

As mentioned earlier, Pedri is an offensive-minded player. He does participate in other aspects of play well, but he’s most threatening on the attack. His stats speak for themselves, with 4 goals and 6 assists in the Segunda this campaign. The Spanish youngster is an incredible asset for his team.

His versatility allows him to play on either wing or through the middle as an attacking midfielder. Thanks to this, Barcelona can utilise him in forming overloads more often in the final third. Dropping into midfield from the wing would cause the type of overload Lionel Messi causes, with the full-backs getting more space and Barcelona being able to sustain possession in the opposition’s half.

As his heatmap shows, he can occupy the wide areas as well as the half spaces efficiently. One aspect off the pitch that this would help him in is that a manager is more likely to select him because of the various positions he can play in. Though this isn’t likely to be a frequent occurrence, this small factor can still make a huge difference in highly competitive professional football.

Moving on to Pedri’s productivity in front of goal, it won’t be a stretch to say he lacks here. He doesn’t have the instinct of a player who plays up front centrally to get into threatening spaces. When he does get the ball, he performs decently for a breakthrough star. He attempts 0.9 shots per game and scores 0.1 per game. It won’t be crucial in the role he is most likely to play in at Barcelona, but as a winger it always helps to have a good goalscoring record.

Additionally, 34.9% of his shots are on target. In the future, shooting is something he could improve especially since he has only a 27% chance of scoring from a shot on target.

Something that the 17-year-old excels at is in creating chances. His technique and vision are superb. Pedri is very good at spotting space and executing an accurate and well-weighted pass. He often plays excellent through balls in the final third. Here, we have an example of his passing ability and vision. Playing on the left wing, Pedri has the ball and is dribbling forward with his teammate making a run behind the opposition defence. He picks up the run perfectly and threads a ball through to his teammate. This completely eliminates six players and puts his teammate through on goal. Such individual ability at such a young age is an incredible asset to have and this will only get better as he grows.

Apart from this, the young Spaniard has a superb passing range, good balance and an ability to find space whenever possible. These abilities complement each other and enhance his passing.

Pedri’s awareness is very sharp, which allows him to visualise the players around him. This leads to him being able to exploit space whenever possible.

“My biggest reference was Iniesta but my dad used to show me videos of Laudrup and I loved how he played, they are both references”

Pedri’s shielding of the ball is very good as well. As a small, agile winger this is especially important. The ability to shield the ball well and maintain possession even when being pressed upon by physically superior players is highly important if he is to transition into a proper interior midfielder such as Iniesta. Seeing his combination of agility and shielding to keep possession, it’s no surprise to know that he claims to have been inspired most by Andrés Iniesta and Michael Laudrup.

Pedri is a very smart player. It is not apparent when one sees him at first, but as one watches him throughout the match, his intelligence is visible as he makes quick decisions which help his team significantly. This is something that is hardly identifiable through stats.

In the image below, Las Palmas are playing against a team with five at the back. In such situations, it’s particularly useful to have your wingers or strikers pin the defenders. This is exactly what Pedri does. He makes a slow fake run towards goal, dragging his marker with him. This creates space for his teammate and the ball possessor identifies this correctly and leaves the player one-on-one with the keeper.

The second example we examine shows his veteran-like thinking. This example showcases the type of thinking only experienced players have unless some player is really smart such as this youngster. In this image, Pedri has carried the ball into the final third with his teammate making a behind through the middle. Most young wingers would try to dribble, shoot, or play the forward through in this scenario.

However, Pedri is aware of the huge numerical inferiority Las Palmas possesses in the final third in this image. Hence, he aptly holds the ball up and passes it to his teammate down the right. Because of this, Las Palmas have time and space for a well-thought-out attack and it also involves more players in the attack showcasing Pedri’s analytical side.

Pedri isn’t the strongest of players. He does showcase good balance for his stature and frame; however, his lack of defensive finesse is covered by his work rate and intense pressing. It does help that Barcelona’s style of play favors such intense pressing. There are slight similarities between Pedri and Barcelona youngster Riqui Puig. Neither of them is the best physically yet they both make up for it by using their physique to their advantage and pressing relentlessly.

Pedri attempts 1.4 tackles per game at Las Palmas and wins possession an average of 0.9 times from tackles. This is because he often tracks back. Especially when playing at left-wing for Spain U–17, he was instructed to drop back heavily. This helped the team use his pinpoint passing and good work rate to regain possession in their half and start a counter. Though not necessary, this kind of versatility adds a different dimension to a winger.

Pedri is one of the brightest prospects of Spanish football. His technical ability, intelligence and pure talent were nurtured excellently under Pepe Mel at Las Palmas. Next season, Pedri will be a player for Barcelona. With the B team unable to gain promotion to Segunda, Pedri will most likely join the blagranas‘ first team.

In a crowded midfield, he will have to do his best to get playtime. If he does get playtime, Pedri might be able to be a regular for Barça in the next two years considering his immense potential. If not, a loan to a First Division side would be good for him as well. Regardless of what happens, watching him play is going to be a treat for culés for many years to come.