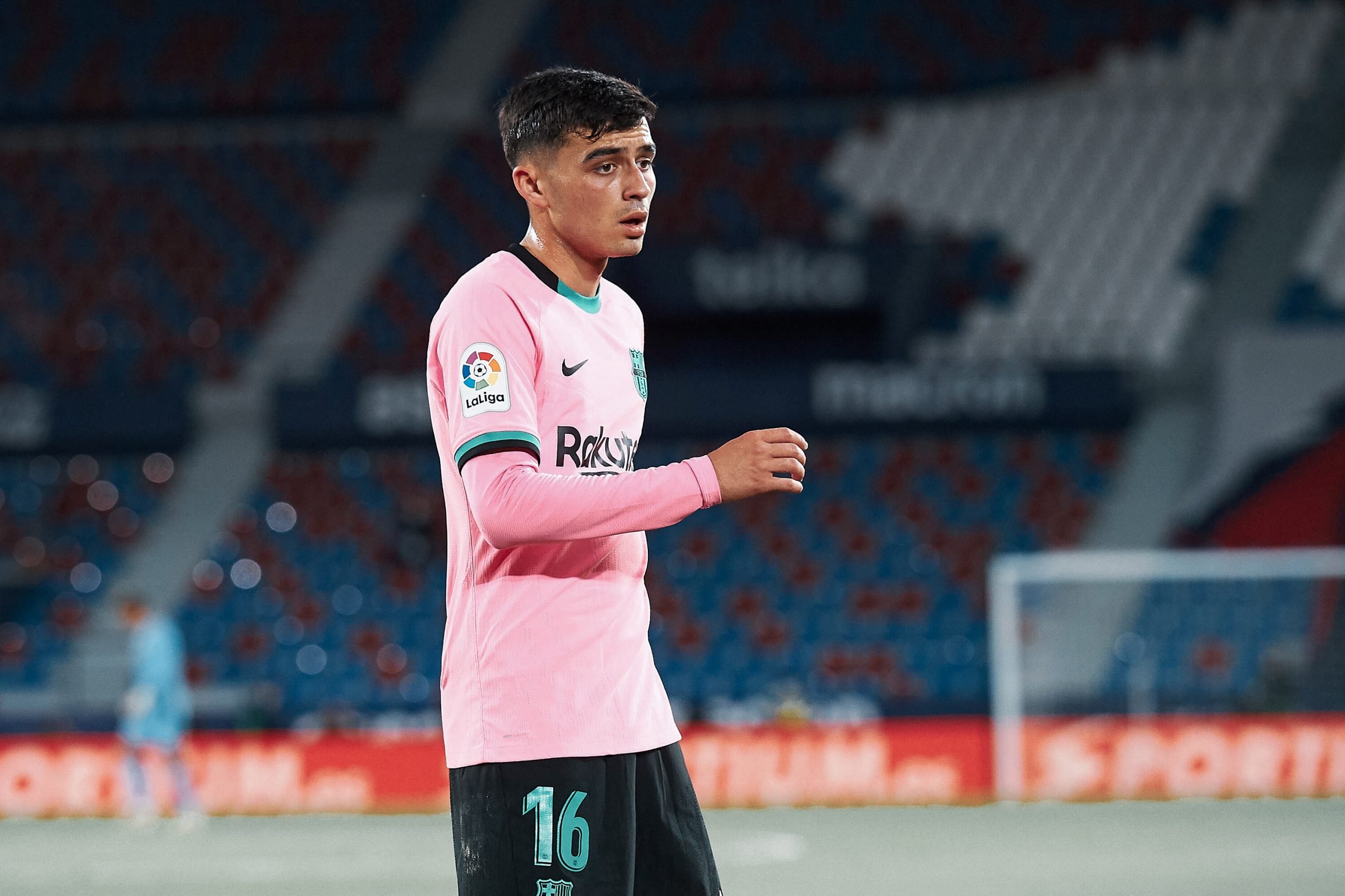 Having been marvelled for over a decade by the exuberance and technique that Andres Iniesta had on the ball, a deep-seated feeling of dread began to brew among Barça supporters. Owing to the fact he had won every possible accolade in his illustrious career, with the exception of the Ballon d’Or, of course, replacing the Spanish maestro was never going to be a simple task.

Barcelona went up every mountain and down every valley in tireless pursuits of a possible heir to his star-studded throne. It wouldn’t take much to know that the vast majority of the club’s efforts were as costly as they were futile. Neither one of Philippe Coutinho, Arthur Melo, or Miralem Pjanic was ever capable of encapsulating his sheer footballing prowess. The careers of these individuals never lived up to the expectations beset to them by the media or the supporters of the club.

Three years after his exodus from the club, the Catalan giants are well within their rights to say that they have finally found their man. The teenage sensation, and candidate for the Young Player of the European Championship, Pedri Gonzalez, has taken Europe, and the world, by storm. Such is his precocious dexterity and immaculate understanding of the game that the 18-year old maestro has sparked life back into a midfield feared dead.

A sensational start to a long career

Having arrived at the club for a meagre fee of five million euros, few, if any, knew what to expect from Pedri Gonzalez. To some, his performances in the Segunda Division were meritorious of a chance in the first team. To others, he was yet another mistake by the ever fallible board of Jose Maria Bartomeu.

In utmost defiance to every pair of harsh eyes that stared him down, he excelled. Almost as if he derives pleasure from it, the 18-year-old flourishes under situations of extreme pressure. The sheer maturity in his footballing level gives off the impression that the teenager is twice his age. That he, without ever having set foot in La Masia, has an astute comprehension of every single one of the club’s needs, is more than deserving of praise.

Praise he has received, is receiving and will continue to receive heaps of, should he continue the journey to the stars he has embarked on. One of the biggest fears with many players his age is one brought about by past precedence: stagnation. Notwithstanding the notion that he would someday regress, or have his remarkable progress prematurely halted, Pedri seems to be going only one way right now — up. This is the trend he followed representing the national team, climbing from U17 to a Euro semifinalist in a little over two years. At club level too, from the Segunda, he slotted into the first team with utmost ease.

“For me Dani Olmo today played an incredible game, something out of the ordinary. But what Pedri has done in this tournament, at 18, no one has done, not even Andres Iniesta did that, it’s incredible, unique,” said the Spain coach Luis Enrique, rightfully heaping praise on the boy who showed him just how special he can be.

So dextrous is he in his trade that even the most seasoned of veterans have had to sit back and admire his brilliance. Both at club and international level, such is his importance to his managers that Pedri has effortlessly displaced individuals far more experienced such as Miralem Pjanic, Thiago Alcantara and Manchester City’s Rodri. Age in his case is nothing more than a number on a sheet of paper.

Pedri is insanely dominant in all the facets of play that positional football requires. More than just impressing with what he does, it is the how, when and where that truly make him special. His understanding of space-time has him evading challenges before they come his way, pressing at opportune times and delivering devastating through balls into his wingers to create goal scoring opportunities from his proprietary left halfspace.

Such an astute and seemingly innate comprehension of spatium et tempus by default, has moulded him into quite the playmaker. As exemplified in the European Championships, he isn’t the one to score or assist the goals — even though his strikers’ ineptitude in front of goal denied him a couple of assists — but he is the one at the forefront in the creation of those assists. This was a facet deeply ingrained in Iniesta’s style of play too.

The best footballers are marked by their ability to play in closed spaces with limited time. One such example is the space in between the lines. When situated at the centre of enemy lines, this is where Pedri does the most damage. His resistance to pressure and his limitless understanding of both his and others’ roles ensures fluidity all throughout Barca’s play. Such is his ability to orchestrate play from these areas one would easily be fooled into believing that he watched the game from above.

While the sages would argue that no good deed goes unpunished, the 18-year old has the luxury of saying the opposite; every exemplary act he makes is bountifully rewarded. As per several reports in recent weeks, the Blaugrana are seeking out a contract extension for the youngster, whose contract ends in a year’s time. The reported new deal also includes better wages, which will be increased once the financial system improves.

How Barcelona can better manage him

As has been the case for a plethora of players, past and present, lacklustre management at a young age has spelt a premature end to what would otherwise have been a fruitful career. Such devastation was a given, as young players have always needed to be handled with care. Pedri is no different.

Despite having featured in 52 matches last season for Barcelona, the Tenerife man was surprisingly injury-free for most of the campaign. His only true scare came in a 2-0 victory over Sevilla via an injury to his calf, and even then he shook off the lesion expected to last two weeks, in just a matter of days. Despite being one of the smallest built players in the squad, Pedri’s physique needs no questioning.

What does require a bit of cross-examination is Ronald Koeman’s handling of him. The Dutch manager kept his word and played youth in accordance to their level and the team’s needs, but nevertheless, he could be held guilty of overusing certain individuals. In his own defence, the sheer drop off from his starting midfield to the bench is so large that even Ilaix Moriba, from the third team, nimbly slotted into the first.

The objective isn’t to completely deprive him of game time. He could maintain his prominent role in the side but have more timely substitutions and a more balanced allocation of minutes. Towards the end of the campaign, Pedri was visibly void of energy. He dragged his feet, just barely scraping through matches with his body intact. If he, and consequently the team, are to perform at their maximal levels, then his management needs to improve.

It wouldn’t take much to see that Koeman fancies Ilaix in the central midfield. The Spaniard has throughout his relatively young career played better than his age may indicate, and the potential he has displayed in his academy days has translated to time on the pitch. He has already amassed a goal and three assists for the Catalans, and if contract talks between his representatives and the club improve, then he could be seen more next season.

The number 28 has often come on to replace Pedri, and it is expected that should he achieve promotion to the first team next season, he will receive considerably more game time. The pair fall perfectly in line with Ronald Koeman’s plans and can share more minutes on the pitch. Having Pedri play four matches for every one that Moriba features in, would only bolster the team in the short and long term.

For as long as he has donned the Garnet and Blue of Barcelona, Pedri Gonzalez has been an undeniable success. He displays character, maturity and dexterity in every facet of his play. His constant evolution, will to impress and seamless collaboration with his comrades on the pitch led to an instantaneous adaptation to first team football.

Nevertheless, his immense potential needs to be developed under a close eye. Past precedence had players like Cesc Fabregas and Jack Wilshere burn out early on. With the presence of Ilaix Moriba, and the incoming promotion of Alex Collado provide suitable alternatives to Pedri, enough to ensure he doesn’t fall victim to a drop of intensity as severe as that which he suffered last season.