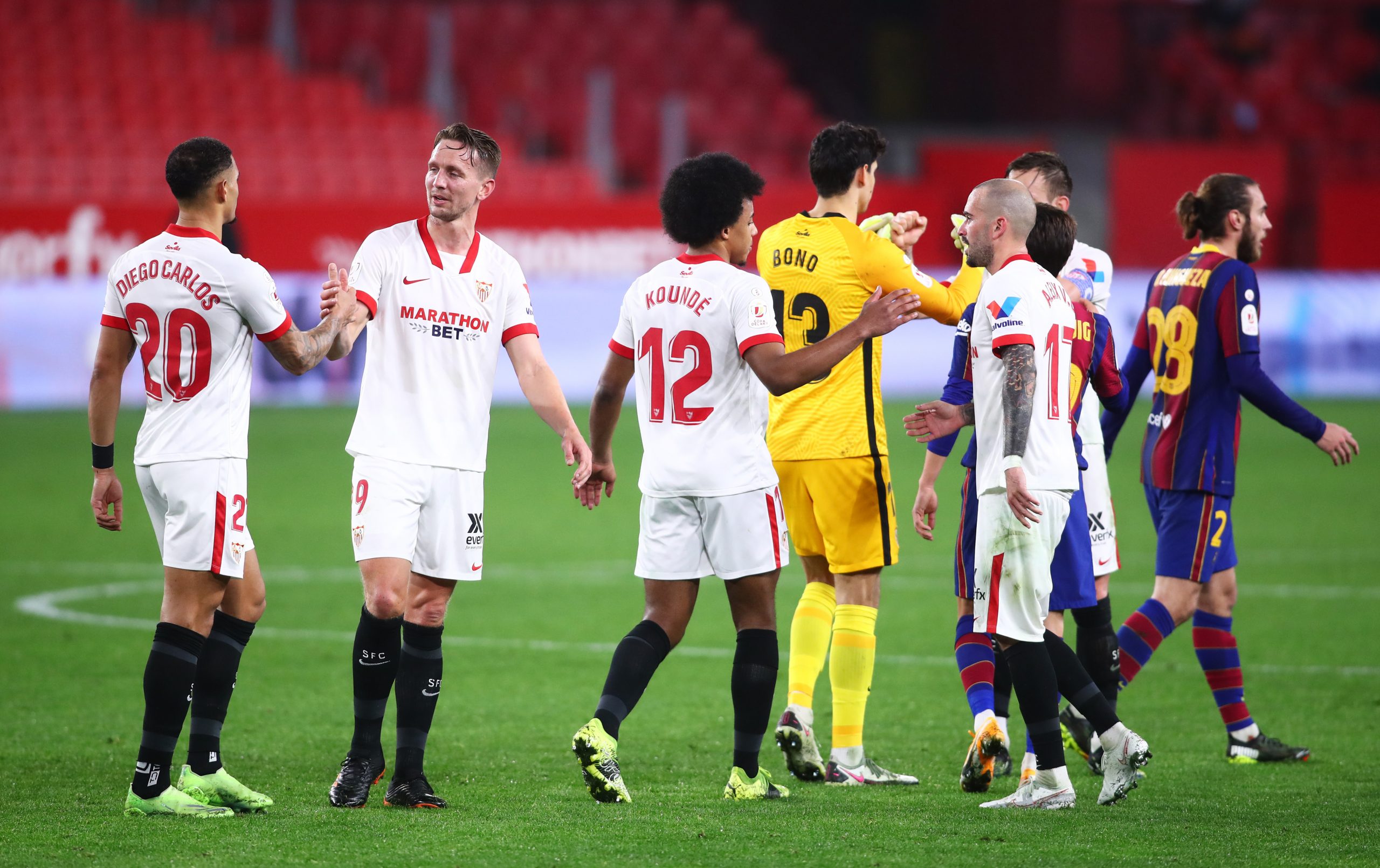 With Barcelona about to face Sevilla twice in the space of a week, all the media buzz is about the two vital upcoming clashes. The Catalans travel to the Ramon Sanchez Pizjuan on Saturday to face Sevilla in La Liga, before hosting them in midweek for the second leg of the Copa del Rey semi-final.

Naturally, the Andalusians are headlining the news on the papers’ front pages. SPORT are labelling the league fixture as the ‘Battle at the Pizjuan’. The fixture will be key in terms of the league title race for Barcelona as well as Sevilla.

Visitors Barcelona are currently in third position, trying desperately to keep pace with Atletico Madrid at the top and to reclaim second position from eternal rivals Real Madrid. Sevilla are just two points behind Barcelona in fourth, aiming to break into the top three.

The outlet report that Ronald Araujo’s return will serve as a major reinforcement for Ronald Koeman to keep the pressure on Barcelona’s Madrid-based rivals.

“The veterans cannot do everything alone,” says the Dutch coach, asking the youth to step up in the crucial games ahead.

Mundo Deportivo also have their attention turned to the Sevilla clashes, labelling the league clash as ‘the first final’. They believe the league game is a stress test for the Blaugrana ahead of their massive challenge to overturn a two-goal deficit in the cup semi-final second leg.

MD also touch upon Araujo’s availability after returning from an ankle injury layoff and state the possibility of a tactical retouching for Barça. Koeman is exploring the idea of a number ‘9’ to open spaces with Messi in behind.

The Azulgranas’ hopes for any sort of silverware this season, hinge largely on these two clashes against Julen Lopetegui’s Sevilla side. As the papers rightly state, they are no less than finals themselves. 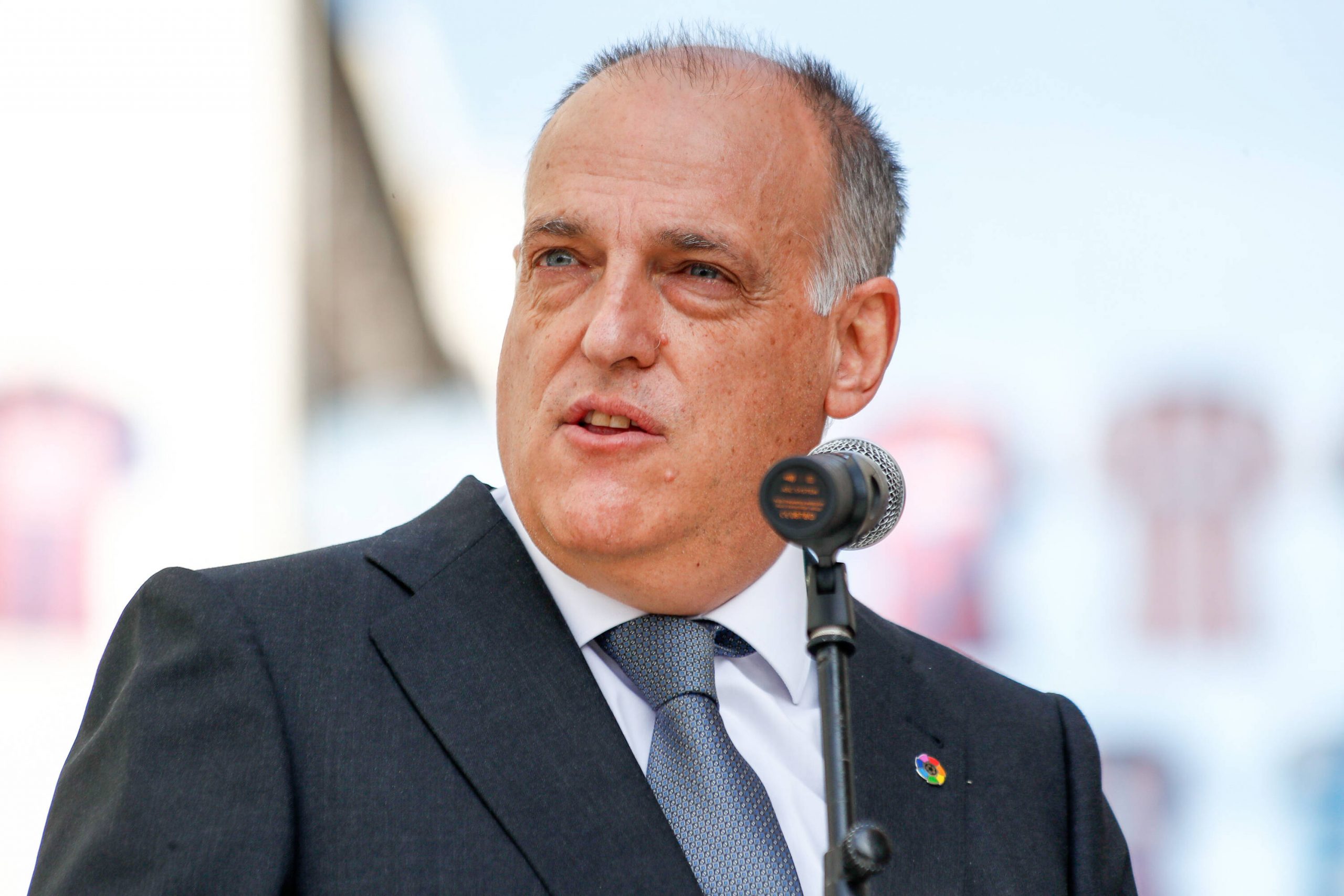 In a conference held by ADEA Forum (Association of managers and executives of Aragon) in Zaragoza, Javier Tebas spoke on a wide range of topics surrounding La Liga.

Mostly, the La Liga president spoke regarding the league’s bounce back from the pandemic and some potential plans for the league to restore public crowds. He also discussed the losses incurred, the summer transfers, among other things.

The Condition of La Liga

Tebas started the conference by claiming that the situation for the Spanish league is comparatively better than other leagues.

Speaking on this, he said, “The situation is worrying, but not so much. I think that of this pandemic the Spanish League is the one that is going to turn out less badly compared to the others.”

He then spoke about the losses incurred in Spanish football, with the net loss amounting to €1 billion by the 30th of September.

On the losses, Tebas said, “Of this billion, 750 have been financed by banks or investment funds, the latter the majority based in London, and the rest have been done by the clubs pulling their cash.”

Additionally, he mentioned that it was big clubs that were affected stronger than the smaller clubs, due to the huge loss of income from the lack of crowds, among other profitable economic activities that clubs such as Real Madrid and Barcelona enjoy above others.

A return for crowds to stadiums

When speaking on a return of crowds to stadiums, the La Liga chief seemed tremendously confident in their ability to host crowds as early as tomorrow. He claimed that they would have to run at between 20% to 30% capacity; nonetheless, the Spaniard was confident that teams would be more than capable of hosting crowds very soon.

Speaking on the same, he said, “There is a working group for the return [of fans] to the stadiums. I hope that in the last league games we can see the public in a proportional amount.”

Speaking on the summer transfer window, the president claimed that there will indeed be a lower amount of transfers as there were in the previous window. Tebas said, “They have already been lower in winter. There may be occasional and exceptional operations, but globally it will decrease. There will be exchanges of players. It’s going to be lower than last year.”

Accordingly, clubs are going to have to dig into their academy reserves more and more as the global and financial situations amend over time.