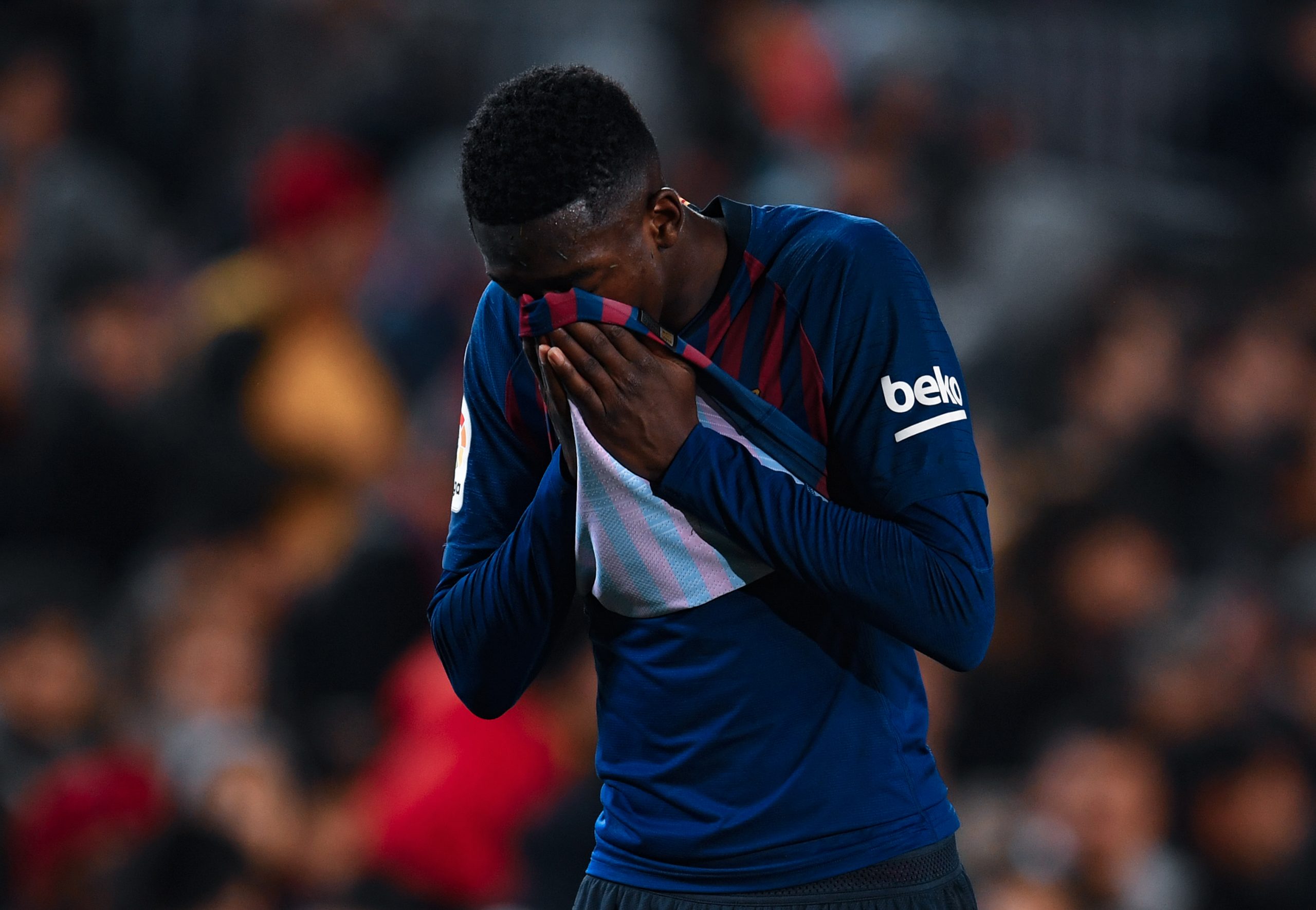 Light has finally broken through the clouds that have hung over the Camp Nou for what must feel like a lifetime for Barcelona fans as Xavi arrived onto the pitch of the legendary arena with rays beaming from his smile.

The return of Catalunya’s beloved son represents what feels like the proper start of the Joan Laporta era, as the Spaniard replaces the last member of the critically derided Josep Maria Bartomeu cast.

On the pitch, some weeds remain, in the physical form of Philippe Coutinho and Ousmane Dembele, two stars who rarely shinned their light over the city of Barcelona.

€222 million is all it took to take away one of Barcelona’s three brightest to Paris, and it has had the same effect as if one from the belt of Orion had disappeared, as the people at Barcelona do not know where to look and are yet to find a worthy replacement.

Dembele dons the tag of being Neymar’s replacement, but for a player with such a large number of testimonies behind him, he has matched that number in unfortunate events and disappointments.

It has left Barça short in a position vital to success, and it has been highlighted more than ever this season, with the likes of Sergino Dest and Gavi having to play out of position to cover the Frenchman’s absence – hampering their progress in the meantime.

With hindsight, the question needs to be asked how much planning went into the signing of the former Borussia Dortmund man. The World Cup winner, on the surface, is a remarkable talent but did anyone check his injury record, whether he was worth the astronomical fee or if there was a better-valued alternative?

These questions need to be readdressed with a new contract for the Frenchman impending. Is Dembele worth waiting for, how much money can they afford to risk and is there a cheaper alternative to the injury-prone winger?

Last season was one of the more promising for Dembele at Barcelona, but does a new contract entail more problems than solutions.

In normal circumstances, the criticism surrounding a signing north of the €100 million mark correlates between the sum of money paid and the value of the performances in return.

Typically players with such a high price tag are worth it, and the chances of failure seem very slim at the time.

French duo Paul Pogba and Antoine Griezmann are examples of extremely talented players who could not perform at their best consistently in their new surroundings for one way or another, but Ousmane Dembele belongs to an unusual category.

Although he has not lit up the Camp Nou on a consistent basis either, that is a product of the winger failing to build up any momentum due to consistently being injured. The situation is similar to Eden Hazards at Real Madrid.

The signing of the Belgian at the time seemed value for money, but the failure to stay healthy has turned that positive acquisition into a horror show for Barça’s bitter rivals.

Is this down to misfortune, or is it the fault of either the player or the club? The two cases are eerily similar on the surface, and the blame could be pointed towards the clubs.

Since joining Barca in the summer of 2017, Dembele has missed a total of 99 matches across a string of 13 separate injuries – an average of one injury for every four months since he has been in Catalunya.

On that long list of setbacks, there is an eye-catching mainstay that should be a massive worry for Barcelona, the repeated hamstring injury that the Frenchman is currently recovering from.

There are two reasons why this is worrying for the Catalan giants: the first is obviously the recurring nature of it, and the second is the impact the muscle injury will have on the winger’s pace.

There is no point in speculating and blaming either the player or medical staff for this continued mishap, but it is obvious that Dembele’s injury problems are not simply down to just misfortune. If Xavi sees the World Cup winner as an essential part of his squad, he needs to root out the cause of this repetition.

There is also a noticeable reoccurrence on the injury list of Hazard, the persisting issue of muscular problems. Once again, whether this is down to the player or medical staff, we will never know, but it is not a coincidence.

The fact that the Belgian international did not have these setbacks whilst at Chelsea will make fans wonder, so for those who are in the corner of the players, a light could be put on medical staff in both cases.

For Dembele and Barça, a worry for a player whose game revolves around his pace is that these muscular injuries start to nip away at that very attribute.

Hazard has noticeably slowed down since his move from Chelsea and looks nowhere near the same player who left Stamford Bridge in the summer of 2019 due to the effect it has had on the Belgian’s ability to take on players.

Former Liverpool and Real Madrid striker Michael Owen often attributes muscular injuries as the root cause for why he never reached his full potential and stated since his retirement:

“The second emotion that lives with me is a sense of ‘what might have been’ had injuries not robbed me of my most lethal weapon – speed. Many of my highlights were early on in my career and I can only wonder what more I would have achieved had my body been able to withstand the demands that I was making of it”.

If Dembele starts to lose his speed, what is the point in keeping him? The winger’s selling point is to cause havoc on the wing, but without that, his value decreases multi-fold. That is the risk Barça run if they decide to offer the World Cup winner a new contract.

The counter problem is who can Barcelona replace Dembele with should he leave upon the expiration of his contract in the summer. It will be hard to find a player who can match the Frenchman’s potential, especially under the financial restrictions the Catalan side currently operate under, a dilemma Joan Laporta seems to have already made his mind up on.

Pending that nothing unusual happens, Ousmane Dembele looks set to be a Barcelona player next year. Reports suggesting that Joan Laporta is set to offer the World Cup winner a ‘pay as you play’ contract based on appearances to protect themselves from future injury setbacks have flooded the air – a positive move but one that could still have its problems.

The Catalan side’s new boss Xavi is also a fan of the Frenchman and addressed the situation regarding the winger at his unveiling on Monday. The Barca legend stated at his press conference:

“It’s very clear for me that Dembele must continue at Barcelona…he can be the best player in the world in his position as a winger and we have to help him achieve it. He is a footballer who can make the difference at Barcelona. His renewal is a priority”.

This sounds all well and good, but the problems remain should the Frenchman’s injury woes not ease up. A contract based on appearances is not worth the money being saved if that player is leaving the team short in a vital position.

So, whether he stays or not, a replacement or backup is an asset Xavi will need next season.

Culers would love to see their club in a position to compete for the signature of Kylian Mbappé next summer, but even that free transfer is out of the club’s reach because of the financial situation.

However, there are some realistic options Laporta could give some attention to when the window opens next summer: they come in the form of Brazilian duo Antony and Raphinha.

Young, talented, and Brazilian; what more could you want from a winger. At 21-years-old, Antony is enjoying a stellar start to his second season at Ajax, having bagged four goals and five assists across all competitions in the opening part of the campaign.

The right-winger’s style of play is perfect for Barcelona; as he is a brilliant dribbler who is adept at beating the opposition defenders, is an impressive passer of the ball, and is a pure winger who likes to hug the touchline – a trait Xavi will appreciate.

The youngster has some weaknesses which are very similar to Real Madrid’s Vinicius Jr last season, in the fact that he causes chaos with his ability to drive into the box but once he gets there often makes the wrong decision, whilst also being heavily one footed.

These have improved this season, however, and with more time, will be expelled from the winger’s game altogether.

Another bonus for Barça is the fact that the Brazilian can also play on the left side and is used to the 4-3-3 formation, having played in the system under Erik Ten Hag last season. This helps with the shortage of wingers at the club, and there should be no settling in period with regards to the formation.

The 21-year-old is contracted to Ajax until June 2025, which means a fee could end up being pricey should his current form continue and with numerous clubs keeping tabs on the youngster. However, Barça have a good relationship with Ajax, and it might be possible that Laporta could sweet talk them into negotiating a deal at a cut price.

The 20/21 campaign saw Leeds United’s Raphinha grab Europe’s attention thanks to some impressive displays in the Brazilian’s debut season in the Premier League. The winger accumulated six goals and nine assists across 30 games for the Yorkshire side, a feat that saw the youngster receive his first call up to the Brazil national team.

The right winger is further down the road from Antony in terms of development and is ready now to play for one of Europe’s biggest teams.

The 24-year-old has many traits that Xavi will find useful for his Barcelona side, such as the his willingness to press, his progressive passing, his dribbling, his finishing from both inside and outside the box, his creativity from out wide, and his ability on set pieces. It is an impressive list of skills that makes the Brazilian a valuable asset.

Raphinha’s contract expires in June 2024 and does not contain a release clause, which means a fee for the Brazilian could be expensive.

Other Premier League clubs such as Liverpool are reported to be interested in the Leeds winger but this might serve as incentive to offload him to La Liga instead of league rivals.

Both of these players would be brilliant options as an alternative to Dembele, but the reality for those Barcelona fans who dream of a new signing is that the Frenchman is staying.

Fans need to trust that Xavi knows what he is doing when it comes to handling the player, and the initial noises coming from the new manager sound positive. The Barça legend sees the player as a vital part of his team, he has an idea on how to get the best out of him, and there are talks about specialised training for Frenchman, which could have a positive effect.

Whatever way you dress it up, that fear of Dembele getting injured, though, will always be present. It is a position the club can no longer afford to be short in, and it is something a specialised contract won’t fix.

It would be a beautiful story should Barcelona stick with the World Cup winner through all his struggles and then go on to be successful together. Unfortunately fairy tales don’t always exist in football, and Ousmane Dembele causes more problems than solutions at present.