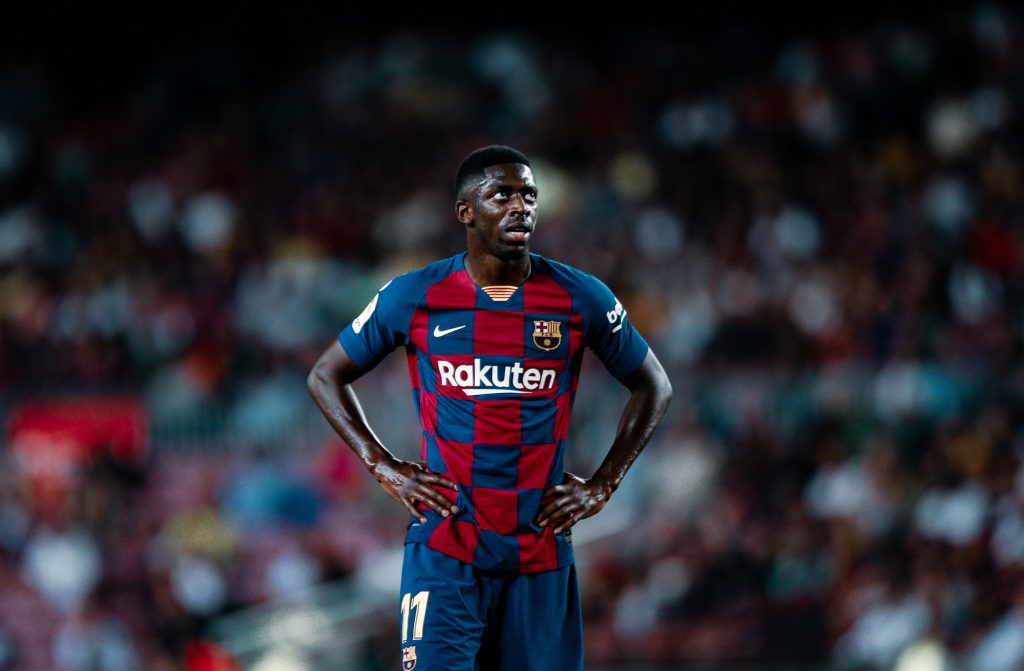 Ousmane Dembélé is closing in on his return, and as the Champions League approaches, Barça manager Quique Setién will be happy to include him in his plans.

As the clock ticks down for the most coveted competition in the world to restart, a sense of thrill and even anxiety starts invading clubs and fans. With the return of a competition that promises to contain both epic and exceptionality, no one wants to be caught unprepared as the tiniest of details could define the fate of teams and players. Only 10 days are remaining until the Champions League kicks off again, and the picture of the squads and contest starts to clarify.

At Barcelona, not everything is rosy. The loss of La Liga to Real Madrid still hurts and menaces the Catalans with a trophyless season. In Europe, they are favourites to beat Napoli in the last 16 at the Camp Nou, despite the first leg having ended in a 1–1 draw at the Stadio San Paolo. But with the likes of Bayern Munich, Manchester City, Real Madrid and Juventus all being potential rivals before the final, it doesn’t look too encouraging this time. To add insult to injury, Arthur Melo is negotiating an early exit, Sergio Busquets and Arturo Vidal will be suspended against Napoli, a number of players are returning from injury, and all sorts of rumours and talks are taking the centre stage in the Barça camp.

But not all is bad news. Since the first day of his appointment in January, manager Quique Setién declared himself a big admirer of Ousmane Dembélé. Unfortunately, the Cantabrian boss hasn’t been able to enjoy a fit Dembélé yet, since the Frenchman suffered a hamstring injury in early February while he was recovering from previous fitness troubles. Before his latest setback, Setién expressed his satisfaction with the return of what would be a ”new signing”. Six months and a pandemic later, the young winger could now really be the new signing Quique has been longing for ahead of the Champions League.

“Dembélé can give us a lot. We will try to finally show what he has. Let’s hope that his performances will be continuous and see how good of a footballer he really is”

Quique Setién
before Ousmane Dembélé got injured in February

Blessed with talent and pace, the quality of Dembélé has been exhibited only in dribs and drabs in his three years at Barcelona. Signed as Neymar’s replacement in 2017, he was said to be a short-term downgrade to the Brazilian, but a long-term improvement to Barça’s weakened options after Ney’s departure. But, while screamers against Tottenham Hotspur or Sevilla filled fans with excitement, Dembélé’s noise has been greater than his impact so far.

“You have to keep in mind that they are still young kids. His dedication, from what I have seen, is total and absolute. I have tears when I see the capacity and intensity in which he works”

Albeit some lapses, everyone is conscious of the brutal raw talent of Ousmane. However, his spell at Barcelona so far has been marred by injuries and ceaseless off-pitch controversies, which have led to continuous talks of what the youngsters doesn’t do versus what he could do. Such natural product has not been able to shine on a regular basis through three whole seasons, which should make the former Borussia Dortmund wonderkid certainly accountable for his difficulties.

But with this extraordinary gift, it is also the club who must have a specific program with him in order to take out his best version at Barcelona. Dembélé, now 23, has always needed a guidance and teacher to mark the path for a youngster that has many times behaved like a kid. Now, Quique Setién, a reported enthusiast of his nature and conditions, could be that mentor the French international needs.

There is little doubt about what an in-form Dembélé could provide to Setién’s side. Many times overly horizontal and harmless, this term at Barcelona the passing has had a much greater significance than the dribbling. But the dribbling is quintessential too, and Lionel Messi has been the only master of such art that has displayed it consistently. Barça need to be less academic and more rebellious, and dribblers like Dembélé, who have become endangered species, can provide the verticality, acceleration and unpredictability to leave two, three or four defenders with a simple technical action.

Can Ousmane Dembélé finally shrug off injuries and shine at Barcelona? | Photo by Carlos Sánchez Martínez / Icon Sportswire via Imago

Ousmane’s problems in his positioning and in being precise and fluid in tight spaces are well documented. But as true as this is, it must also be added that this season Barcelona have been in dire need of someone who wouldn’t follow the rules on the pitch. Or, better said, who would follow his own rules, while not breaking the collective structure either. Dembélé struggles to be delicate and disciplined, but such chaos may be useful at times too.

As rivals have spotted and exploited Barça’s weaknesses over and over again, their defects on the flanks have been exposed. When opposing defences use a compact block, the only spaces that they leave will be out wide. With Ansu Fati still not a regular starter when both Luis Suárez and Antoine Griezmann are fit, and with full-backs not being self-sufficient enough, a true dribbling and destabilising winger is needed for Barcelona. Quique Setién must be exultant with the well-timed recovery of Ousmane ahead of the Champions League.

On Tuesday morning, in the return from the group after their short holidays, Dembélé, Griezmann and Clément Lenglet have been doing light training and specific work. With 11 days until Barça host Napoli at the Camp Nou, starting Ousmane could be a bit too rushed. But the signs are positive and he could at least feature in the clash, and there are reasons to be optimistic. Ousmane Dembélé hasn’t played since November and underwent surgery in Finland in February, but now it finally looks like his return is closer than ever.