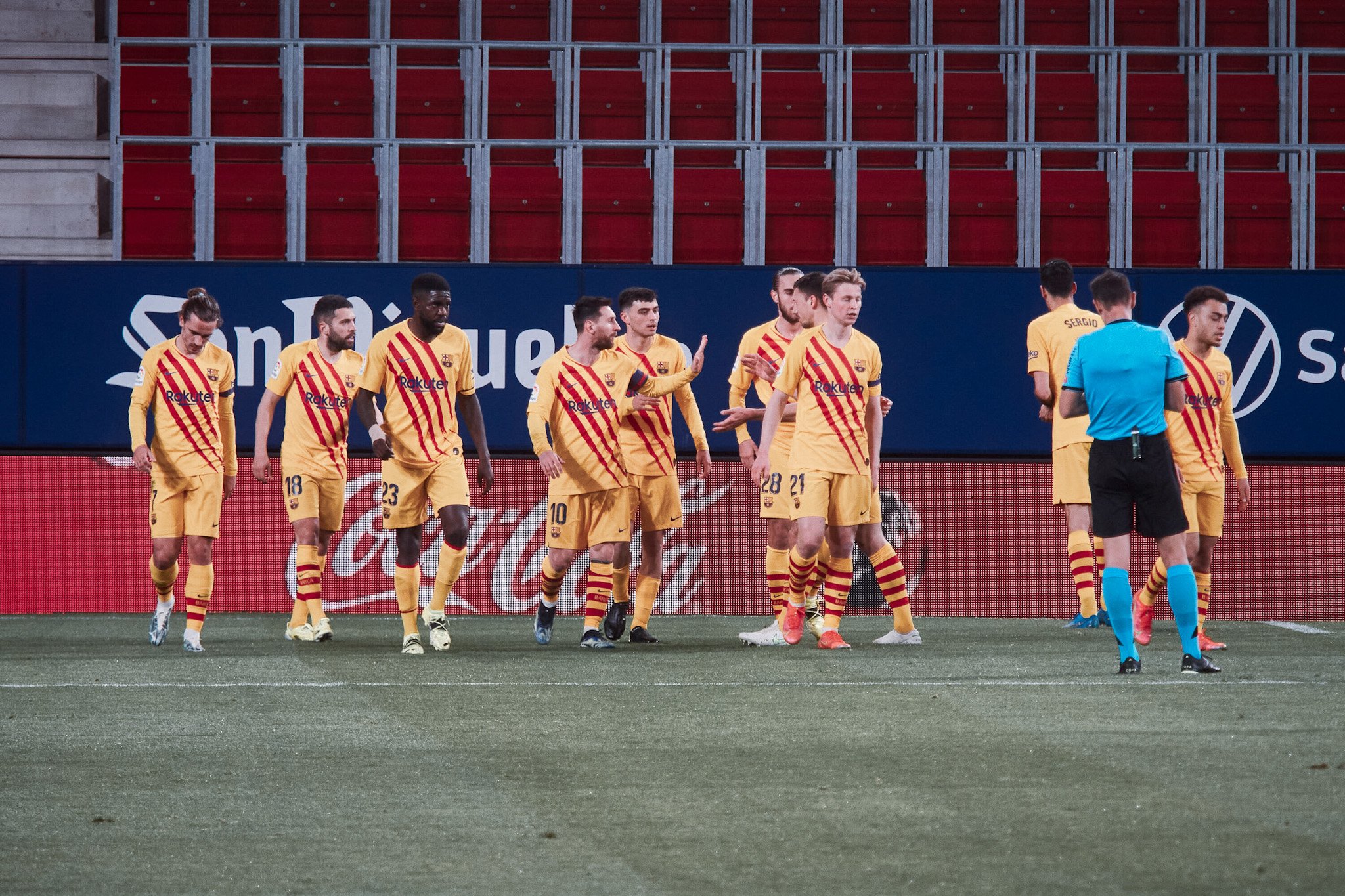 Image by Eduardo Sanz via Imago

After a tiresome week, Barcelona went to Pamplona to complete a brilliant week. Away at El Sadar, the Catalans were the most tired of the two sides.

Osasuna capitalised on Barça’s tiredness with their pace down the wing, and Marc-André Ter Stegen already had more to do in one half than against Sevilla in both games.

However, with this Barça team, the spirit is permanent. Also, when the best player in the world is in the mood, Barça tend to win. Again, Lionel Messi’s brilliance illuminated the stadium, and the opener was a compilation of the Blaugrana captain’s genius.

In the end, Koeman’s men came out on top in the first half as their technical superiority was apparent.

Ronald Koeman might have felt a bit dissatisfied after the first-half display. The Dutchman went back to a back four, but Barcelona were significantly worse in the second half.

Once again, the Copa del Rey finalists’ quality showed as Barcelona doubled the lead. Osasuna were powerless in front of goal, but their opponents did not have many opportunities.

Messi’s teammates go home happy as they are now only two points behind Atletico ahead of the Madrid derby.

14′ Osasuna have a long sequence of possession, and they find a way through Barça’s midfield. Marc-André Ter Stegen saves Enrique Barja’s shot from outside of the box beautifully.

30′ GOAL! Osasuna 0-1 Barcelona: Barça get their foot on the ball, and Lionel Messi finds Jordi Alba behind the defence. The attacking full-back takes his time and fires a shot in to put his side in front.

34′ Osasuna go on the counter. Ruben García’s control is superb and helps him fire away at Ter Stegen. The German keeper makes a one-on-one save to keep his side in front.

47′ Messi finds Ousmane Dembélé on the right, and the Frenchman gives him the ball back. The Blaugrana captain’s strike is powerful, but Sergio Herrera keeps a firm hand and saves the attempt.

70′ Pedri fails to start a counter-attack when Aridane Hernandez dispossesses him. Osasuna send in a cross, and Ante Budimir’s header is not far off the goal.

82′ GOAL! Osasuna 0-2 Barcelona: Pedri finds Messi in front of the box. The Argentine sends a quick pass towards Ilaix Moriba, whose rocket finds the top corner. The youngster’s first goal for Barça doubles the lead. 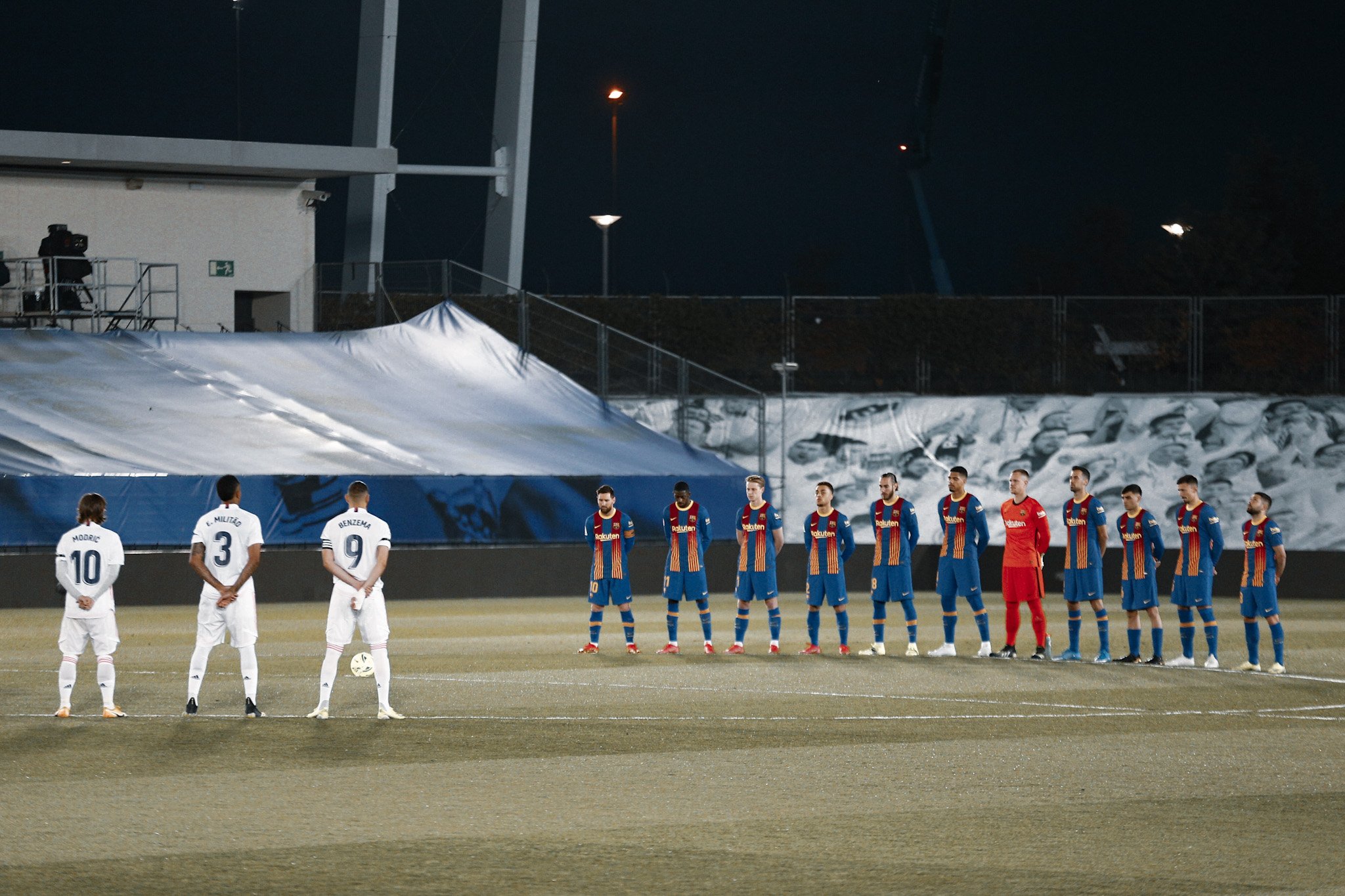 Photo by PRESSINPHOTO/Shutterstock via Imago

In the final edition of El Clásico in the 2020/21 domestic campaign, Barcelona incurred their fifth defeat of the league campaign. It was end-to-end stuff in the Alfredo Di Stefano stadium, as an exceptional first-half performance from the hosts was followed up by a tantalizing second from Barça.

This game had everything someone could ask for in a Clásico. There was controversy, passion, goals and for the first time in a few years, a red card was the cherry on the top. These are Barca Universal’s takeaways from the game in the capital.

With four shots on target, 1.58 Expected Goals, and two goals to their name, Real Madrid put to show their sheer efficacy in front of goal, as well as in defence. For the first half at least, Zinédine Zidane’s men were always at the right place, at the right time making all the right movements and to devastating effect.

Los Blancos‘ philosophy is one of winning, and doing so regardless of how the victory is earned. Contrary to the Catalans, who not only need to win, but also do it a certain way, Los Merengues are more than capable of abandoning their usually proactive approach to games in favour of a more reactive one. The fact that they are not bound to a specific ideology makes winning matches one of the simplest of tasks.

They held the ball for only 32% of the game, which goes completely against what a majority would expect them to. At the end of the day, however, possession matters significantly less than what one does with it. With every lapse in concentration from the Garnet and Blue, Madrid had enough men forward, and well enough positioned, to hit them where it hurt.

Despite the relatively low xG, they had enough big chances to even lead 4-0 come the halftime whistle. When it came to defending, their tight-knit defence, in stark contrast to that of their rivals, barely broke a sweat. They imposed an impenetrable low block, and applied a collective press to force as many errors as they could.

In addition to this, Zidane has the luxury of having a starting eleven of devastatingly versatile footballers in his arsenal. Fede Valverde for instance was as much a right-back as he was a central midfielder and a winger. He executed each role to pristine perfection, and so did his peers to ensure all 3 points, and bragging rights stayed in Madrid.

Following such a harrowing performance in the first half, few, if any, could have expected Barcelona to mount a comeback. Had this been any other team, that would have been possible, but given Real Madrid’s first-half performance, this was all but envisageable.

Indeed, the Catalans did fail to get any points from the Alfredo Di Stefano stadium, however, the sheer mentality they showed in the second half was a sight for sore eyes. Ronald Koeman made the necessary adjustments to the side, reverting to the 4-3-3 and with it, they wrought trouble in the Madrid backline.

If in the first half Barça seemed caged in endless cycles of worthless possession, then in the second they made thorough use of it. The Blaugrana created eleven chances for themselves in the second period, and while doing this, they in turn limited Los Blancos to just a single shot on goal for the entirety of the half; a complete turnover from their performance in the opening 45 minutes.

It was nail-biting stuff up until the final second of the game, as Ilaix Moriba’s volleyed effort struck the underside of the crossbar. Given the overall performance from both sides, a draw would have been a considerably fairer result, but even in defeat with this version of Barça, the players and fans know that they can keep their heads held high.

A game of fine margins

Games of the magnitude of El Clásico will forever be decided by the most minute of details and the same was the case here.

The first significant one was the frame of the goal. In the first half, following the umpteenth counter attack from Real Madrid, Fede Valverde, who up until then was having yet another phenomenal showing against Barcelona, struck the frame of the post with a shot that crucially bounced underneath Sergio Busquets.

In the second half, Ronald Araújo nearly scored an own goal, but with Ter Stegen rooted to the spot, the ball rolled delicately onto the post and out for a corner. In the final minute of the match, and with Madrid fighting for their lives, Ilaix Moriba struck the underside of the crossbar to end this sensational tie on an emotional high.

Jordi Alba has often been criticized for being just as much a blessing offensively as he is a curse defensively. In the build-up to the hosts’ opener, he had one task to fulfill: mark his opposing fullback. This is one he absolutely failed, as he drifted too far inside, and by the time he had noticed his error, Lucas Vázquez already had Karim Benzema in his sights. Too little, too late.

The final significant detail was in the goal that won Los Blancos the game. After what many consider a poorly given free-kick from the referee’s standpoint, Toni Kroos surely could not believe his eyes when he saw the sheer state of Barça’s wall. Marc André Ter Stegen’s poor leadership of his defenders left him utterly vulnerable, and his German counterpart spared him no blushes, slotting it home to seal the victory for his side.