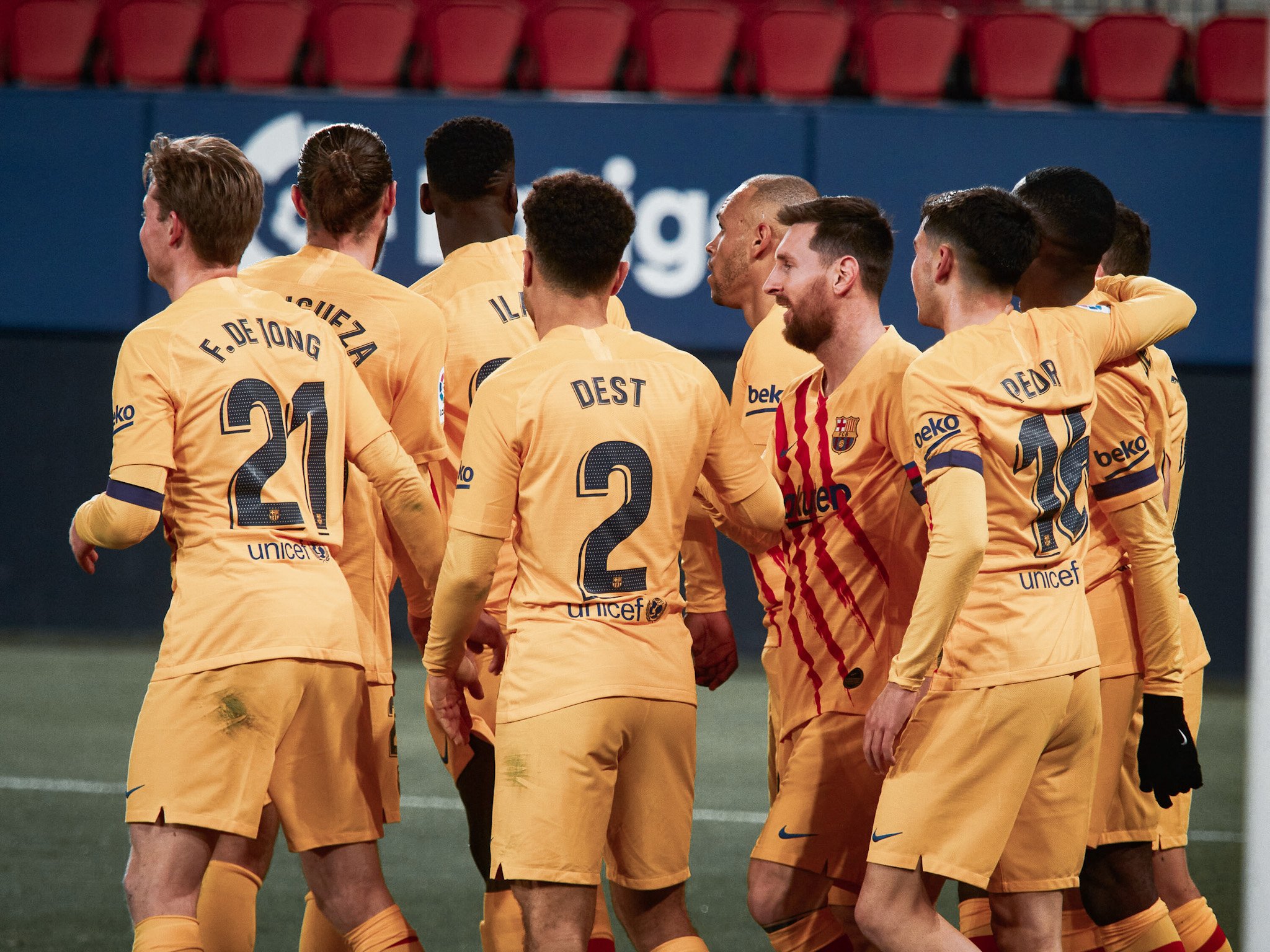 Photo by Eduardo Sanz via Imago

On the eve of Barcelona’s 41st presidential elections, the team managed to secure a crucial victory at El Sadar against Osasuna. The Catalans, with all three points, have provisionally moved to within two points of leaders Atletico Madrid ahead of their derby against Real Madrid on Sunday.

Ronald Koeman stuck to his guns with a 3-5-2 setup that worked wonders against Sevilla last weekend in La Liga, as well as the fabulous comeback win in the Copa del Rey semi-final. The Barcelona players were frequently seen fluidly interchanging their positions in attack, with the midfielders and even the wingbacks finding themselves as the highest players up the pitch.

Osasuna were quick to get men behind the ball, but also looked dangerous on the break on a few occasions. The home side, however, were unable to capitalize on their limited chances. Barcelona enjoyed the lion’s share of possession with 63%. The Blaugrana worked very well as a cohesive unit to shut out Osasuna for an eighth away win of the season in La Liga.

Sensational goals from Jordi Alba and substitute Ilaix Moriba ensured that they walked back with all three points. The season seems to be gaining some traction now for Barcelona. They will now travel to Paris on Wednesday for the second leg of their Champions League round of 16 encounter against PSG. A near-impossible task awaits them, but this victory along with the last two in the cup and league will certainly provide a boost in morale.

As commanding a presence as ever in between the sticks. After his heroics against Sevilla in the cup, he was once again on top form to keep Osasuna out. The German goalkeeper made a phenomenal save from Kike Barja’s fierce shot early on in the game and then came up with another strong stop to deny Ruben Garcia in the 33rd minute.

He was alert throughout the game, securely gathering crosses and floated balls into the Barcelona box. It was one of those matches where he never looked like conceding.

The defender has been having a faltering season so far, but his performance tonight was a major positive. In the absence of the injured Gerard Pique and Ronald Araujo, Lenglet was at the center of Koeman’s three-man backline. He did a fine job, winning a few crucial aerial duels and sweeping up any danger from the home side’s forwards.

Mingueza has been an incredibly valuable asset to Koeman this season. He has consistently put in solid performances and tonight was no exception. The youngster once again shone through on the right of this three-man defense, which is seeming like the perfect position for him.

Mingueza showed wonderful composure at the back, controlled aggression in his tackles and even got forward very well from the right. He played in a couple of great crosses towards the edge of the area and some great line-breaking passes to Sergino Dest in behind. Aside from a couple of lapses in concentration, another very solid performance from the 21-year-old.

The Frenchman had a fairly routine showing on the left of the defense. He played some clever through balls over the top to find the runners in behind and made a couple of good clearances. Picked up a yellow card for a cynical foul on Calleri midway through the first period. He was hooked off at half-time, with Koeman reverting to a 4-3-3 setup, bringing on his compatriot Ousmane Dembele.

Started the first half with some wonderful dribbles to make progress down the right flank. Dest showed immense energy, covered a lot of ground and tracked back diligently. However, the American lacked the composure to provide anything of substance in the final third. His crosses were rushed. Lots to work on in the next game for the wingback.

After question marks over his form earlier in the season, especially defensively, Alba’s offensive output remains consistently bright. The left-back scored the opener with a thunderous finish for his fifth goal of the season. Provided constant threat down his flank and was always available to provide support out wide on the left. He also attempted a few great through passes in behind.

The veteran continued his fine form of late with another solid showing in the middle of the park. He completed 91% of his passes, won five duels and also advanced further forward to support the attack from time to time. Repeatedly won the ball back in advanced positions in Osasuna’s defensive third. A great performance from the 32-year-old before making way for Ilaix Moriba in the second period.

De Jong seems to have hit his stride and there is no stopping him. The Dutchman was again tireless in chasing the ball down, covering every blade of grass. Kept bombing forward to support the attack and made moves into the box. His ball progression was fantastic once again, as he carried it out of danger time and time again before releasing his teammates.

The 18-year-old had another superb display, showing just why the coach has so much faith in him. Pedri was indomitable as he orchestrated the ball movement wonderfully. He was always available to receive a pass, and his first touch was immaculate as always.

The midfielder was able to turn wonderfully in tight spaces and linked up with his teammates in typically splendid fashion. He made five interceptions as well, showing his work-rate off the ball.

Ever the puppet master, Leo Messi had a hand in both of Barcelona’s goals. First, an inhumanly good pass to Jordi Alba over and behind the Osasuna defense for the opener. Then some clever linkup play on the edge of the box with Ilaix Moriba for the second.

Messi was typically involved in Barcelona’s attack, being the focal point, dropping deep and spraying the ball forward. He had a few sighters at goal as well, but despite not scoring grabbed his fifth and sixth league assists of the season.

A night to forget for the World Cup winner as he failed to produce anything of note as part of a front two with Messi. The Frenchman had only 34 touches of the ball, fewer than any other Barcelona player on the pitch, even Ter Stegen (41). He made a few runs in behind but to no avail. He made way for Martin Braithwaite in the 67th minute as part of a double change.

Ousmane Dembele: 6.5. Provided good width and allowed Barcelona to settle into their 4-3-3 setup to gain more control in the second half.

Ilaix Moriba: 7.5. A night to remember for the 18-year-old as he scored his first goal for the club with a wonderful left-footed strike into the top corner. Sealed the win in style for his side.