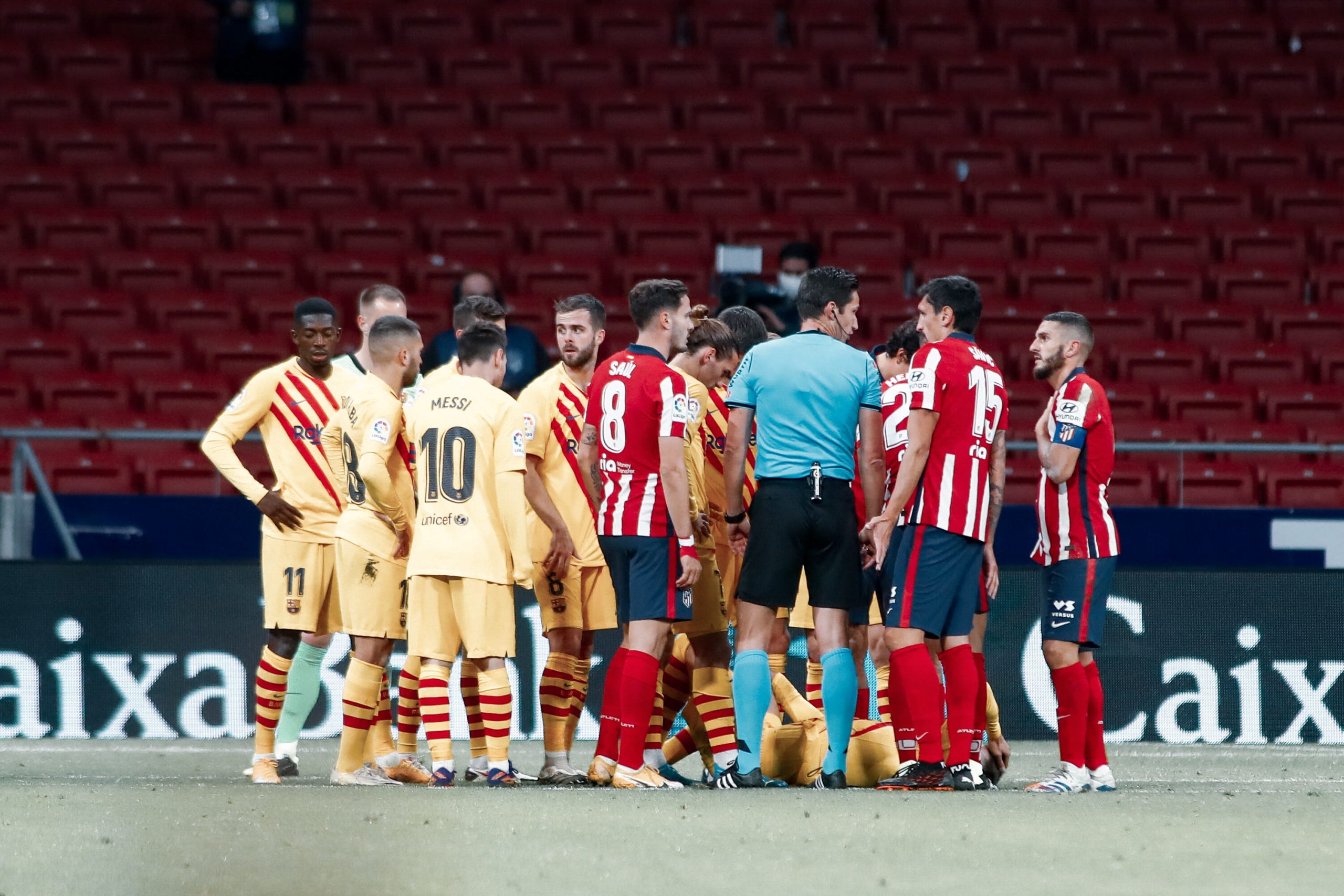 Nearly seven years ago, in May of 2014, Atlético Madrid travelled to the Camp Nou in the final matchday of the season; a draw against Barcelona would be enough to crown them champions of Spain. In a tightly contested match, the visitors drew 1-1 and reigned supreme over a stunned Camp Nou crowd.

Flash forward to May 2021, and the Camp Nou is set to host another equally decisive match. A loss against first-place Atlético would see Barça’s title hopes fade, a win would push them into first place, and a draw would give Real Madrid the edge. But, as crucial as this game is, the 2020/21 La Liga campaign has been uncharacteristically unpredictable and picking a champion will be difficult until the final matchday.

Prior to Saturday afternoon’s kickoff, there is plenty to unpack and analyse.

The 2020/21 campaign has seen both the best and worst of Los Rojiblancos. They got off to a hot start, capitalizing on Barça and Real’s early slip-ups. They were undefeated in their first nine La Liga matches, including beating Barcelona 1-0 and have been atop of the league since November 28, 2020. Starting the season playing more attacking and on-the-front-foot than ever before, Diego Simeone’s men won 50 points out of a possible 57. At one point, they were 12 points clear in the lead for La Liga.

Unfortunately for them, things nosedived midseason. A COVID-19 outbreak within the squad coupled with mounting injuries saw their lead slowly diminish over time. They were eliminated in the Copa del Rey by third-division side UD Cornella and unceremoniously ousted from the Champions League Round of 16 by Chelsea. Since February 8, Atléti have won only 26 out of 45 points, including winning only seven out of 15 matches.

Their slip coupled with Barça’s and Real’s rise has given us a nail-biting finish to the league race.

Under Diego Simeone, Atlético have often been defined by their rigid defensive-minded approach, boasting a compact backline and a damaging ability to score off the counter. Further, they are notoriously pragmatic, but Simeone may have some tricks up his sleeves this weekend.

This season, the Argentine manager has switched between formations utilizing a back three or a back four, but he will likely opt for the former against Barcelona, allowing for more fluidity in offense and more numbers behind the ball when defending. Interestingly, Simeone has never won at the Camp Nou, but he did get the upper hand against Barça in their first encounter in October, winning 1-0.

Nonetheless, however Simeone lines up, one thing is for sure: Barça will have a long night ahead of them.

Sitting first in the table, Atlético have the best-ranked defence in Spain, having conceded only 22 goals and the second-best attack, behind only Barcelona with goals scored (61).

They are led up front by none other than ex-Blaugrana talisman Luís Suarez, who has 19 goals across 34 appearances. Behind the Uruguayan is do-it-all Marcos Llorente with 13 goals and eleven assists. Los Rojiblancos have an array of attacking talent, including Joao Felix (10 goals, four assists), Yannick Carrasco (six goals, nine assists), and Angel Correa (seven goals, 11 assists). Notably, Correa has five goal contributions in his last five appearances.

As a team, they are over-performing their expected goals by 7.28, indicating lethality and extreme efficiency in front of the goal.

Defensively, Atlético have been as stout as ever, having a sturdy backline with José Giménez, Mario Hermoso, Stefan Savic, and sometimes Filipe in front of one of the best goalkeepers in the world, Jan Oblak. Oblak is in the midst of another dominant season and is leading the league in Post-Shot Expected Goals minus Goals Allowed with a plus 7.8, indicating that he has saved his team from nearly eight more expected goals.

Building up from the back has been a staple of Atléti this campaign. They will typically have three players in the back, whether the three centre backs or a midfielder dropping in between two. Their wingbacks spread high and wide, opening up space in the middle as they stretch their opponents. Alternatively, if a team chooses to defend narrowly, there will be plenty of space out wide.

However, if the short option isn’t there, long balls will be sent to their wingbacks or to a marauding Suarez or Marcos Llorente.

Their centre-backs have been integral in the buildup, whether Hermoso or Savic in particular and even right wing-back Kieran Trippier. The three of them are ranked second, third, and fourth among Atlético players with the most touches and most completed passes this season. Furthermore, Trippier and Hermoso are squad leaders in progressive passes, ranked second and third, respectively.

The midfield pairing of Koke and Saul Niguez will look to pick up the ball in the central areas of the pitch, or the centre-backs will be looking for balls into the final third for on-running players. As such, Hermoso, Savic, and Trippier are in the squad’s top four in terms of total passes into the final third.

Koke and Saul in the middle of the park provide the team with defensive stability, high work rate, and possession retention. On defence, they will sit in front of the centre-backs and look to clog “Zone 14”, the area in front of their box where Lionel Messi and Antoine Griezmann will look to do most of his damage. Offensively, they will be an outlet for runners and wide-men like the wing-backs.

As Atlético lack natural width due to their formation, the wing-back pairing of Trippier and Carrasco are crucial. Together, they have combined for 21 goal contributions, over three key passes per game, and six shot-creating actions per game. Carrasco, naturally a winger, looks to take his opponents on and is by far and away the squad leader in progressive carries per game with 9.51. For reference, the second-place Koke has 4.93 per game. In all, the wingbacks allow Atléti to be fluid in and out of possession, and they pose a constant threat darting down the wings.

In front of the central midfielders is often Marcos Llorente, the engine that makes this team tick. The 26-year old is a workhorse and one of the most versatile players in the world. He is given a free role in the midfield, looking to make runs behind the defence, runs into the box, and progress the ball forward. He has an impressive 13 goals and 11 assists this season, and his battle against Frenkie de Jong will be one of the key matchups in the game.

With Angel Correa and Luis Suarez filling in the remaining two positions up front, Atlético take their chances in front of the goal. Suarez has been impressive and proving Barcelona wrong all season – his 19 goals rank fourth-most in La Liga. Despite conceding the least amount of shots this season, Barça rank last in shots-on-target (38.7%), and Suarez will look to pounce on any opportunity he has.

How can Barça beat them?

Simply put, this is a huge match for the Blaugrana. They have underwhelmed against most high-quality opposition this season, and with the title (potentially) on the line, can they get a promising result?

The Catalans have all the tools necessary to squeeze out a victory against Atlético, but their defence will likely struggle to contain the visitors. They have conceded a goal in each of their last five La Liga matches (totalling eight), so a clean sheet on Saturday afternoon is unlikely. Furthermore, Atlético’s pacy players and unpredictability should cause problems for their shaky backline.

Atléti have scored 24.6% of their La Liga goals this season in the final 15 minutes of games. Given Barça’s tendency to lose focus and wither near the end of games, this is worth keeping an eye on.

Optimistically, however, Blaugrana’s attack has been as dominant as ever, but Atléti will be tough to break down. If Simeone opts for a 3-5-2 formation, it will shift into a low-block with a five-man backline and their midfield, hounding Barça’s as well as creative engines like Messi and Griezmann. To stretch out Atléti’s compact backline, Jordi Alba and Sergiño Dest (or Sergi Roberto) as wingbacks will be key to providing width and making runs into any open spaces. In the box, runs from Griezmann and Frenkie De Jong will keep Madrid’s backline on their toes.

Atlético have changed their play style this season, but Simeone has still shown a tendency to dig in defensively against more dangerous opposition. Thus, a key question to consider is, how will the Argentine look to play? He has the players necessary to play on the front foot in a balanced, back-and-forth affair, but he still might choose to be cautious and reserved.

However, the two teams line up, a high-scoring game seems unlikely, and the result should come down to moments of individual brilliance. With decisiveness in front of goal and composure in the backline, Barcelona can reach the top of the table for the first time this season. It’s a lot to ask for, but it’s now or never.