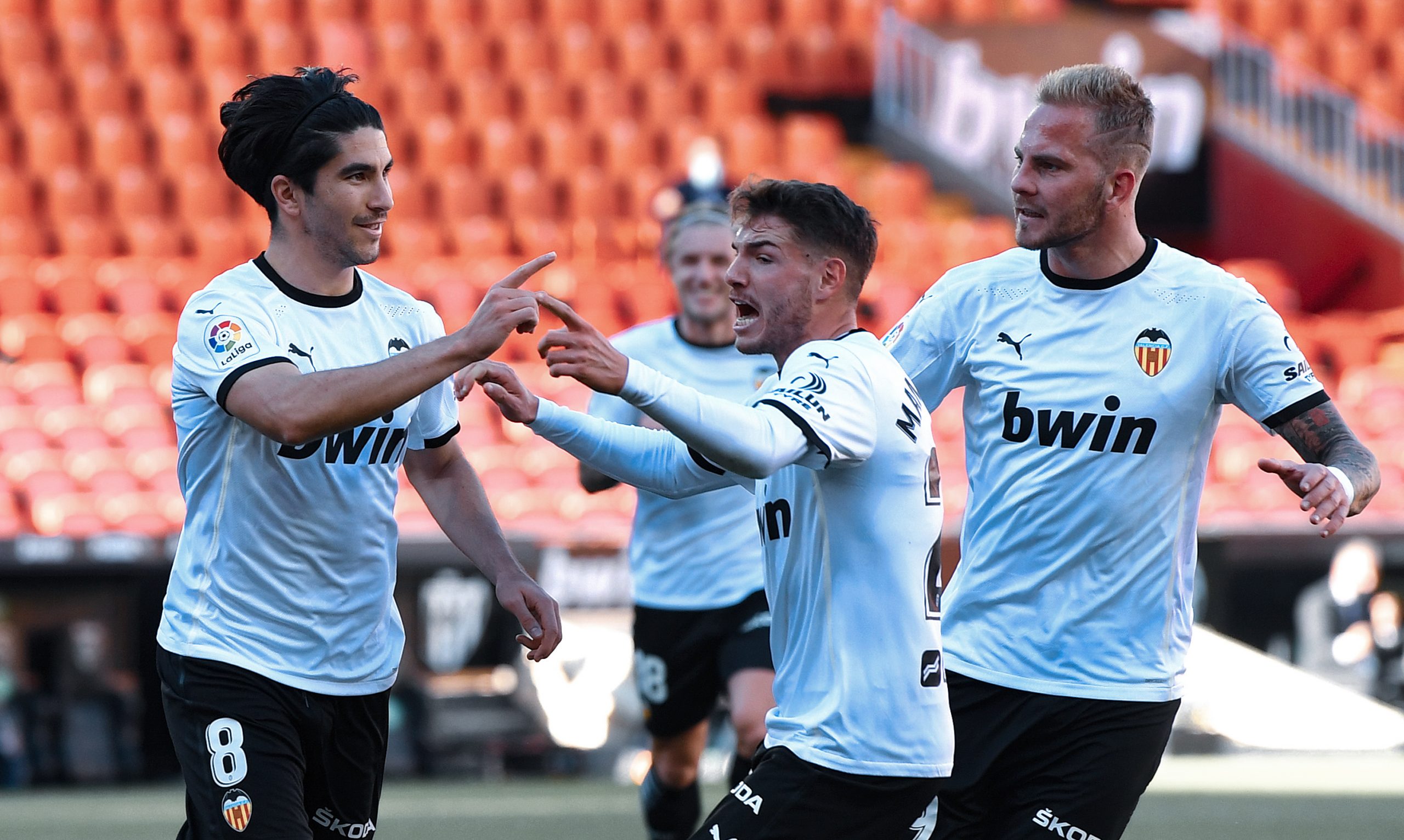 As Barcelona look to capitalize on their current form against a struggling Valencia side, find out what tactics to expect from the matchup in this opponent analysis.

After a disastrous transfer window and the huge rift that developed between the club’s owners and the fans, Valencia have understandably struggled this season. Finding themselves 12th in the League, Los Murcielagos have been impressive in neither defence nor attack which is perfectly illustrated by their goal difference of zero.

Javi Gracia’s Valencia side has lined up in a 4-4-2 throughout the season as they have historically. The team’s philosophy or style of play is simple. Play counter-attacking football and give minimal space through the middle when defending. To facilitate this counter-attacking style, the wide-midfielders are always instructed to join the attack to essentially form a 4-2-4, or a 4-2-3-1 with the help of Manu Vallejo who drops just a tad bit deeper. The full-backs will look to join the attack as well, often looking for overlaps.

When attacking, the strikers look to receive the ball on the shoulder of the defenders as the midfielders attempt through balls whenever possible. When the team has essentially everyone except the centre-halves committed to the attack, is when they will attempt a lot of long-range shots. As a result, 47% of their shots are from outside the box. These are rarely successful as the team has only two goals from from 56 attempts.

The strikers are key to Valencia’s attacking system. Maxi Gomez is ever-present joined by either Kang-In Lee or Manu Vallejo. When unleashed properly, these strikers are extremely lethal.

Owing to this, Valencia have the 4th best record for goals per shot in La Liga this season at 0.12 to complement their 0.3 goals per shot on target statistic. The wide-midfielders are instructed to play balls between the opposition’s centre-halves and full-backs. While the strikers stay narrow and make runs, the wide-midfielders and central-midfielders look to circulate play and look for a chance to let the strikers through on goal.

Even though Valencia look to sustain attacking play as suggested by the fact that they have 67% possession in the final and middle third, Gracia’s team doesn’t hesitate to risk losing possession by playing long balls. With a success rate of 57.6%, these long balls aren’t always successful, but when they are, it provides excellent scoring opportunities. As a result, they have the 5th highest rate of goal-creating actions per 90.

Though Valencia are a struggling side with just one win from their last five games in all competitions, the current Barcelona side could very well be vulnerable to Valencia’s attacking style.

“If an opponent plays long balls, it is more difficult to press. Sometimes the game you want works and sometimes not, it depends a lot on the rival. It is important to have another game at home and win it.”

Clement Lenglet has looked like a far cry from last season in defence, and the two centre-backs from the match against Real Sociedad — Ronald Araujo and Oscar Mingueza — are a very inexperienced pairing. Because of these factors, Valencia have a chance to make the most of their long-balls and counter-attacking play against Barcelona’s unreliable high backline.

Valencia’s 4-4-2 formation is a very structured one when defending. They look to play a mid-block most often. In this mid-block, some players have specific instructions often as we shall see in this analysis.

When the opposition’s central midfielders have possession, one of the central-midfielders of Valencia looks to advance and press the player. The other, however, will remain at his initial position and provide cover to the defence. Finding Valencia open at the defensive midfield position is a rare sight, with a narrow central block being a priority.

Gracia’s team will look to force the opposition wide. Once the ball is on the wings in the final third, one full-back and one wide midfielder will immediately press the possession holder. The central midfielders will then look to intercept passes by cutting passing lanes or join the press depending on the number of opposition players.

The situation mentioned in the above paragraph is one of the few in which Valencia actually press intensely. The mid-block is very structured, and the strikers allow the opposition to have a position in their half. In fact, Valencia have just 18 tackles in the final third this season, the third-lowest in La Liga.

Goalkeeper Jaume Domenech has enjoyed a cracking start to the league this season. Apart from his superb shot-stopping ability, Domenech is an excellent passer of the ball. Valencia do not necessarily try to build-up from the back as we can see from their average goal kick length. At 55.2m, this is the 6th longest average in the league. Instead, the wide midfielders will look to receive the ball, with the full-backs moving up the field and making sure possession is not lost through second-balls.

When building-up, if the ball is to be played short, the two central-midfielders are crucial. They will look to position themselves between the opposition’s forwards and find space in the channels to receive. When the ball is not played to them, the full-backs will look to play the ball forward to the wide-midfielders who can then play it forward or inwards to the midfielders. As a result, it’s no surprise to see that only 25% of the attacks are through central positions. However, a huge 65% of the shots are through the middle, which is due to the earlier discussed narrow front two.

Valencia are especially weak against fast dribblers and players who can face the opposition in 1v1s. When the opposition wingers have the ball, if they are able to get past the press and get away from the full-back, the structured approach of Valencia means that the opposition wingers would then have a lot of space available. The central-midfielders will always form a line separate from the defensive line when outside the box.

As a result, they have been dribbled past 137 times this season already. This is also due to the reactive approach shown in defence, rather than a proactive one. In the defensive third, 640 pressures have been attempted with 777 in the middle third.

Sergino Dest’s spectacular individual skill will be extremely crucial here as he attempt to break past the backline with tricks. Additionally, as seen from the last game, Martin Braithwaite is not afraid to take on defenders in the final third and uses his pace to his advantage. Similarly, Konrad de la Fuente and Fransisco Trincao can be deployed out wide to make best use of the opposition’s inability to defend individually.

As mentioned earlier, Valencia will essentially play a 4-2-4 when attacking. Due to this, there is a lot of space left down the wings. Though the full-backs often advance as well, the opposition can easily counter as Valencia are weak on the transition. Apart from the space down the wings, the central midfielders will look to fall back immediately.

This means that centrally, it is straightforward to play past Valencia when their structure is yet to regroup. It makes them especially vulnerable on the transition as the front-two don’t press much, making it easy for the opposition to pass the ball around and progress.

Based on this, Miralem Pjanic will be key here as the Bosnian’s ability to find runners almost as soon as he gets the ball is unmatched in the Barcelona squad. It can also be exploited if Lionel Messi stays out wide during counters, and then builds by cutting inside.

Javi Gracia’s Valencia is a team that has had to deal with a lot of problems, both on and off-the-field. The season has been poor from Los Che, but there have been some impressive performances, for example, the battering of Real Madrid. Barcelona face a tough test in Valencia despite their recent form, and all the pressure will be on Ronald Koeman to replicate the success from this week. Although this is a team that struggles often, Barcelona and the defensive frailties showcased this season are something that makes this matchup one that Valencia could enjoy.