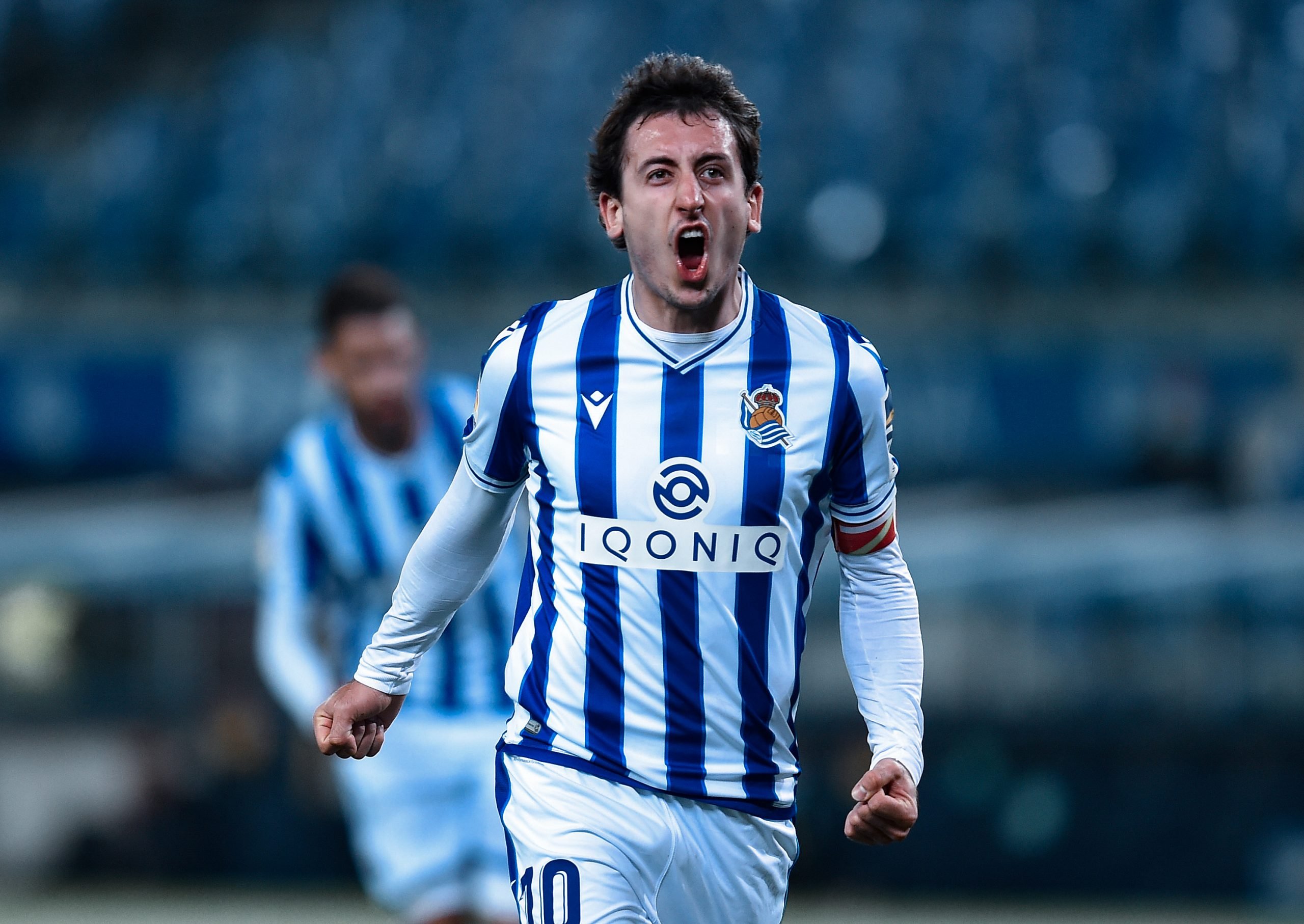 As Barcelona ready themselves to take on Real Sociedad in the Camp Nou, join us as we take a deep dive into La Real’s tactics.

As is typical of a majority of La Liga’s top sides, the backbone of this Real Sociedad side’s success is in its pressing, positioning as well as their occupation of spaces in the opposition’s half.

When playing out the back, the Txuri-Urdin prioritise a high defensive line, greatly thanks to the tactical ingenuity and flexibility of Mikel Merino and Andre Guevara. When in a double pivot, Guevara tends to drop deep, forming a temporary back three as the fullbacks begin occupying the forward spaces. Merino, acting as the more advanced and slightly less positional pivot, tends to rise and occupy the half-spaces, and on occasions, the flanks as a false winger.

Mikel Oyarzabal upfront is often a tactical headache for opposition managers. His dexterity in multiple roles, stemming from his vast experience despite his relatively young age, makes him an ever-present threat. One of the most prevalent tactics in Imanol Alguacil’s side is the use of spaces in between the lines. The occupation, manipulation and control of these areas is almost indispensable to their functioning, and Oyarzabal is at the heart of its success.

The young Spaniard often drops into these channels, and once this happens he is essentially free to wreak havoc. Taking advantage of the presence of his wingers, Oyarzabal is perfectly poised to thread passes through gaps left in behind by the opposition. To create these sorts of advantages, his partner in crime and namesake Merino often works in tandem with him to create positional and numerical superiorities.

On occasion, while Oyarzabal attacks through the flanks in the final third, Merino often drops slightly deeper, and space he moves into serves to create a state of pandemonium within one — or more — of the centre-backs. If one were to follow Merino, then he would leave a gap that Oyarzabal would inevitably exploit however if they were to stay put, then Oyarzabal would quickly profit off this, as he would have yet another attacking outlet in the final third.

The dynamism and versatility in Merino’s style of play is a treat to watch, however, it is anything but when one is up against him. While on the wings, he and Oyarzabal alternate roles, as he stretches the opposition defence granting his Spanish counterpart adequate time and space to cause damage to the opposition.

Also pivotal to the success of Imanol Alguacil’s side is their constant generation of central superiorities. Ranging anywhere from three to five, La Real is able to confuse within opposition defences through this facet in their gameplay. Their overloads in these central zones are often complemented by a wide array of attacking outlets from both the flanks as well as down the middle.

When on the offence, Oyarzabal and Januzaj, for instance, have a tendency to drop deep, congesting the centre whilst occupying the opposition fullbacks. As this happens their fullbacks, often Joshua Zaldúa and Nacho Monreal will move forward, forming a temporary 3-2-5 in the attack. Given the verticality provided by the likes of Oyarzabal when dropping deep, or David Silva in the half-spaces, La Erreala essentially have an infinite number of attacking outlets and potential combinations within and around in the final third.

Being proactive rather than reactive in their approach to defending, La Real often seek to win the ball back as quickly as possible, and they do this through a mixture of both an intense press and zonal marking right at the start of play. Sticking true to Johan Cruyff’s ideologies — despite not necessarily being a Cruyffist himself —, Imanol Alguacil uses his forwards as his first defenders and to great success.

His players’ main objective is to win the ball back as fast and as close to the goal as possible. Such is the efficiency in their pressing that on their day, the average number of passes per defensive action (PPDA being a metric used to determine how many passes a team allows their opposition before a defensive action or intervention) ranges between six and eight. To put it into context, Pep Guardiola’s Barcelona, one of the most famous sides when it came to pressing, allowed their opponents around or less than six passes per defensive actions on average per season.

Real Sociedad bank on their ability to keep the ball as a defensive tactic as, quite evidently, the opposition can not score as long as they do not have the ball. It is a basic footballing concept, however, they make the most out the most trivial situations. From open play, La Real barely concede chances in their half. They have conceded four goals at xGA of 6.8, a true testament of the efficacy of their tactical approach to games.

Given the nature of their starting line ups, Real Sociedad often defend with a host of evolving formations ranging from a 4-1-4-1, a 5-3-2, a 4-1-2-3 and lastly, a 4-4-2 (flat and diamond). The goal of these ever-shifting setups is to drive the opposition as far away from their box as possible, and as mentioned before, as near to the opposition’s as possible.

As a group, Real Sociedad has barely any frailties, however certain automatisms within their own tactics seem to work against them. The Txuri-Urdin prioritise an intense, choking press, and while for the most part, they are highly efficient at applying it, they sometimes get ahead of themselves and press unnecessarily.

The major flaw in this is that they leave gaps in critical areas, especially in the central defensive midfield, an area that often proves very taxing to teams when not adequately occupied. Their occasional lack of preparedness and collective disorganization leaves them blatantly open at the back.

Barcelona is getting better at handling the intense pressure often imposed on them by opposition players. Taking advantage of Merino’s offensive approach to games, Barcelona can profit off him and the system as a whole by placing press resistant players in these weak spots.

Some candidates for this role would be Riqui Puig, arguably Barcelona’s best midfielder this season, and have him partnered with Miralem Pjanić who can punish their visitors in more ways than one. In this particular case, his aptitude at holding the ball through intense pressure could be of great use here.

In central defence, given the fact that the Basque side will surely press the Blaugranas‘ backline, having Oscar Mingueza playing out the back, partnered with Clément Lenglet in central defence to make pressure breaking passes. Frenkie de Jong’s presence will be key to them playing out the back, as his ball-carrying ability will serve to create momentary positional superiorities, however, their effectiveness will largely depend on how quickly he takes and lets go of the ball once it gets too him.

While Real Sociedad utilise a high defensive line to reduce the playable area and create offside traps against the opposition, at times they shoot themselves in the foot by going a tad bit too high, at times so carelessly that they even find themselves within the opposition’s half.

The tactical weakness here, and one they often get attacked through, is that all it takes is one quick attack to open them up brutally. Barcelona can achieve this by deploying natural wingers, and here the likes of Francisco Trincão and Konrad de la Fuente will certainly be of great use over Philippe Coutinho, who has not enjoyed good form over the past few games.

Delivering the cut-throat passes in behind their defence will be none other than Miralem Pjanić. His ability on the long ball is not one very popular among Barcelona supporters, however, in this case, it would be key to unlocking Real Sociedad. This could be juxtaposed by using the likes of Jordi Alba and Sergiño Dest supporting the wingers. Their pace could prove to be the killer blow to stalling La Real’s incredible run of form, even if it would be by just a match.

As can be seen, Real Sociedad have an adverse number of strengths, stemming from their versatile and dynamic players both in attack and defence. The style of play that has been in the works for the past few years is finally bearing fruit, and as it stands, they are currently the best team in Spain.

Despite all that is going for them now, it by no means signifies that they have no weak points. Even though they are free in number, La Real, like any other team, has its strengths and its weaknesses. With the right tactical setup from Ronald Koeman, Barcelona might just run away with this match.