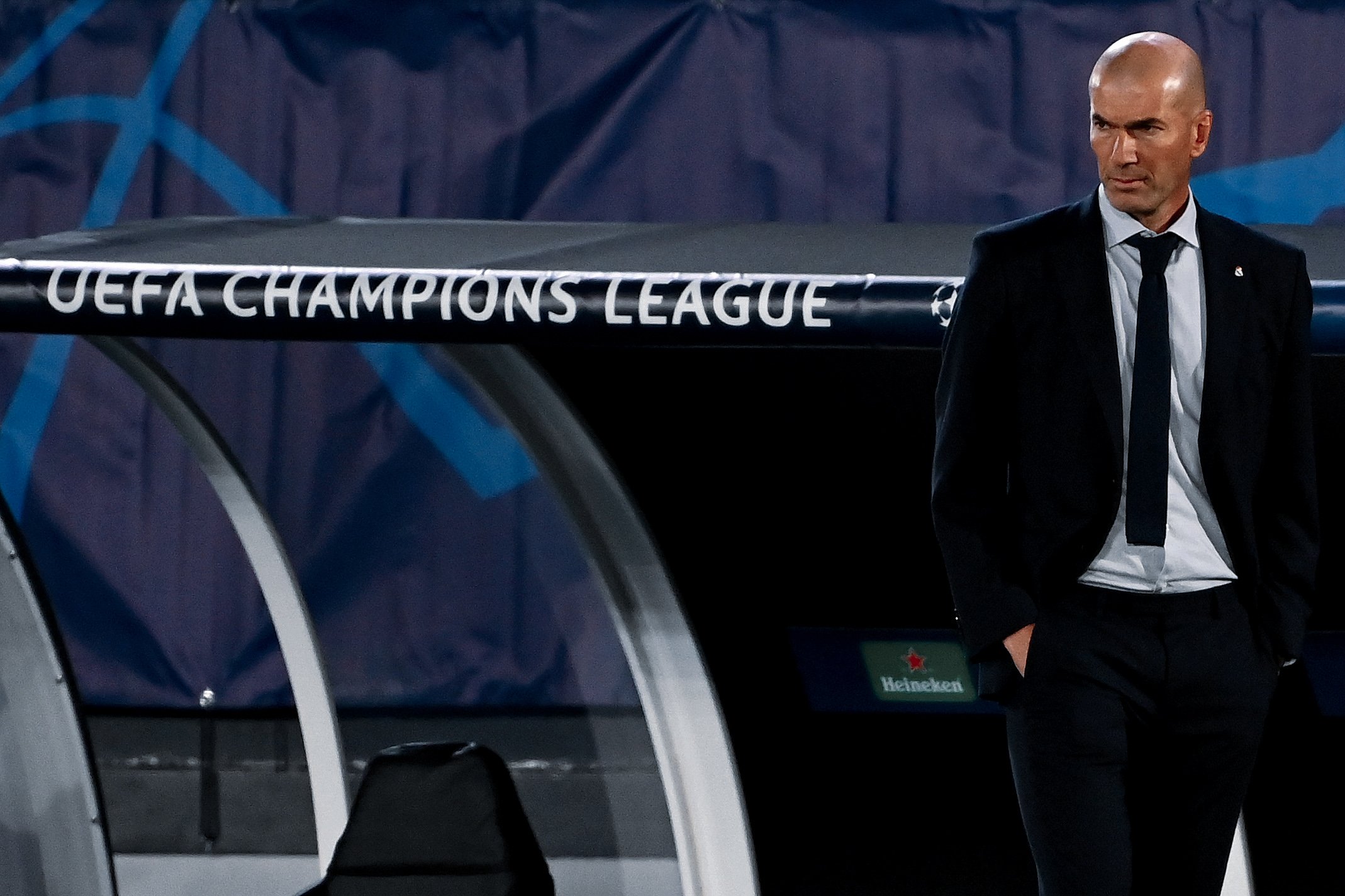 The first El Clasico of the 2020/21 La Liga season is upon us and Real Madrid head into the clash just a point behind leaders Real Sociedad with a game in hand. Despite a hat trick of victories just before the international break, Los Blancos now find themselves on the brink of three defeats in seven days. Several reports have emerged that head coach Zinedine Zidane could be facing the sack if his side head home with anything less than a point from this encounter. But, what it is that has gone wrong for the defending champions this season, and how can Barcelona counter these to the best of their ability?

The capital outfit has shown an evident inability to make fair use of the high possession they have in games of late. They’ve been consistent with two formations: a 4-3-3 that morphs into a 4-2-3-1 and a 4-4-2 diamond as well. In and of themselves, these tactical setups aren’t by any means inadequate; however, the players deployed in these systems have been unable to make the best use of them thus far.

With a striking duo of Luka Jovic and Karim Benzema, Real Madrid reasonably should be able to do more than score just over a goal a game as they have done this season. They’ve thus far scored 6 in five of their outings, with five of those coming against two teams, Real Betis – who were on a red card for around 30 minutes – and Levante away from home.

We are yet to see the best of Luka Jovic in the Spanish capital. (Photo by PIERRE-PHILIPPE MARCOU / AFP)

Taking a look at their xG (expected goals) of 10.29 in all competitions, we see that they also reasonably should have scored four more goals than they actually have – in theory. This kind of underperformance can be attributed to the likes of Vinicius Jr and Karim Benzema for their wastefulness in front of goal, both of them underperforming their xG by 0.71 and 1.47 respectively. Additionally, the former has also missed several opportunities to shoot, which cannot be attested to ‘expected goals’.

Specific examples of these are when Vinicius found himself in a one on one situation with the keeper against Real Valladolid and spent a chance worth 0.48xG and Luka Jovic somehow failed to put away one worth 0.66xG against Levante. To put this into context, Opta deems shots over 0.38xG as big chances and for them to have squandered two such significant opportunities and to do it so often that they find themselves four goals behind their expected goals, is worrying.

In their league winning season, Real Madrid scored 70 goals at an xG of 72.93. Of this, 52.83 came from chances they created in open play, while the rest was distributed across corners, direct free kicks, set-piece opportunities and the infamous penalties they scored all across the campaign. For a club the size of Real Madrid, racking up such a relatively low xG from open play should have been big enough a red flag to push Zidane and club President Florentino Perez into investing in some forwards to bolster their attack. The lack of expenditure in this past window meant that Zidane had to tweak his tactics to suit the players he has at his disposal, something we are yet to see consistently this season.

While the forwards can be criticised for their inefficiency in attack from clear cut chances, their positioning to make use of said chances that come to them has been wanting. Karim Benzema isn’t your typical striker. He, in some ways like Messi, is a player that prefers to drop deep to create chances for his teammates and surge forward whenever the opportunity presented itself. Such can be seen in his stats last season: 21.25xG and 8.15xA (expected assists).

Someone needs to shoulder creative responsibilities from Benzema to bring the best out of him in the attack. (Photo by GABRIEL BOUYS / AFP)

For this to be a successful tactic, he needs players – like Jovic – to occupy the spaces he vacates in attack to be an ever-present threat for when a chance is created. Instead, his teammates find themselves lost amid their oppositions’ backlines and even if a through ball were to be played, there simply wouldn’t be anyone there to cease it.

This dreadful running off the ball leads to many of their attacks breaking down before they even begin. On several occasions, despite finding themselves in some auspicious positions, the attackers, be it from the wings or down centrally, simply don’t place themselves in places that would grant them good enough chances to score regularly. It stands to reason that scoring goals from high-quality opportunities requires players to be active in the penalty box.

3. A Pungent lack of creativity from the Wing

Football in the modern era is dominated by two kinds of fullbacks: inverted and offensive. Real Madrid via Marcelo have spearheaded the revolution of a traditionally defensive position of the pitch and transformed it into yet another offensive outlet to benefit from.

While the fullbacks and central midfielders can make a convincing case against their forwards for their inadequate positioning, they don’t help their cause either with their consistently inaccurate deliveries are.

As per Whoscored, Real Madrid has attempted a total of 93 crosses into the opposition penalty box in their six games this season. While this is a good aggregate number, only 17 of these have actually met their targets at a measly 18% success rate.

This inefficiency can undoubtedly be blamed on them, given the aforementioned problems when it comes to positioning. Still, the onus is on Dani Carvajal, Ferland Mendy, and Marcelo to do better than just 18%.

Last season, in Europe’s top 5 leagues, Real Madrid had the second-best performing defence of teams that had completed their domestic campaigns. While the metric for ‘goals conceded’ places them right at the top, a better representation of their proper defensive rigidity can be evaluated by use of xGA (expected goals against). Despite conceding just six goals in all competitions so far, Real Madrid overperformed by 8.15 goals.

Clearly, such a level of overperformance isn’t by any means sustainable as somewhere down the line; a team is going to pick their pockets and make a mauling out of them. We saw bits of this against Shakhtar Donetsk in midweek and could easily see the same this evening. Thus far in La Liga, despite conceding just three goals, Los Blancos have an xGA of 5.02 and can attribute that majorly to the phenomenal saves made by Thibaut Courtois.

There is only so much that Thibaut Courtois can do alone. (Photo by GABRIEL BOUYS / AFP)

The positioning of their defenders is as inefficient and as inconsistent as that of their attack. In the build-up leading to Cadiz’s only goal of the game, we saw a pattern that we know all too well from Real Madrid and one that repeated itself on several occasions in that game. They failed to track their markers, left gaping holes in their defence and were punished accordingly.

They can, of course, rely on their Belgian shot-stopper to continue making insane saves – which is precisely why they bought him – but it merely isn’t an expendable tactic. Again, their lack of investment has come to bite them in the back. While the backline consists of dominant individuals, there is a clear communication gap between then, which often leads to poor marking and tracking.

How can Barcelona exploit these Weaknesses

The Catalans can easily counter Real Madrid by adjusting the line up in several ways to hurt their opponents. Firstly, Ronald Koeman could start by playing two pacey fullbacks in Sergino Dest and Jordi Alba; though the fitness level of the latter is still in question.

Why do this? As mentioned before, there’s an apparent problem when it comes to the positioning and movements of the Real Madrid attackers.

Following Luka Jovic’s performance in midweek, there’s a meagre chance of him making it into the starting XI for the El Clasico. Therefore there’s a high chance that Real will deploy a 433 with Vinicius and Rodrygo in the wider areas. To mitigate their impact, Barcelona will need to use two fullbacks that have enough pace to make ball recoveries if ever their visitors are successful in making overlapping runs into the byline. While not an airtight solution, it does substantially aid the Catalans’ case.

What about Benzema himself? Assuming Zidane will grant him the freedom to float around the box rather than stay within it, the best counter to this would be to partner Frenkie de Jong with Sergio Busquets rather than Miralem Pjanic. The Spaniard is far more defensively stable than the Bosnia,n and his interpretation of spaces is a notch higher. His defensive attitude will help him alleviate a large chunk of what the Frenchman has to offer

Moving on to their midfield, Cadiz did an excellent job at shutting their creative players down by use of one block of five in defence layered by a midfield block of four on some occasions.

The beauty of the 4-2-3-1 that Ronald Koeman is keen on using is that it can be switched to cater to several situations. By taking advantage of the fitness levels of most of our squad right now, Koeman could use a 4-5-1 when defending and instantly transition to a 4-3-3 or the 4-4-2 when the team advances.

Here there is one major thing that Barca could do to punish their visitors, and that is by using Francisco Trincao in the wider areas. The Portuguese did an excellent job at two things against Ferencvarosi: staying close to the touchline and taking on opposing defenders. He completed five take ons against the Hungarians, and most inspiringly, most of these were near the touchline.

Starting Trincão over Griezmann will be beneficial for the team tomorrow. (Photo by LLUIS GENE / AFP)

Against Marcelo, a player infamous for his defensive work, having his profile on one end can do wonders for the team. Adding Dembele late on, preferably in the final 30 minutes to take advantage of the waney legs of the Madrid defence, could prove to be a blessing for the hosts.

Should all these come in play, we can expect Barcelona to finish the El Clasico the way they started the new season against Villarreal – with a bang.