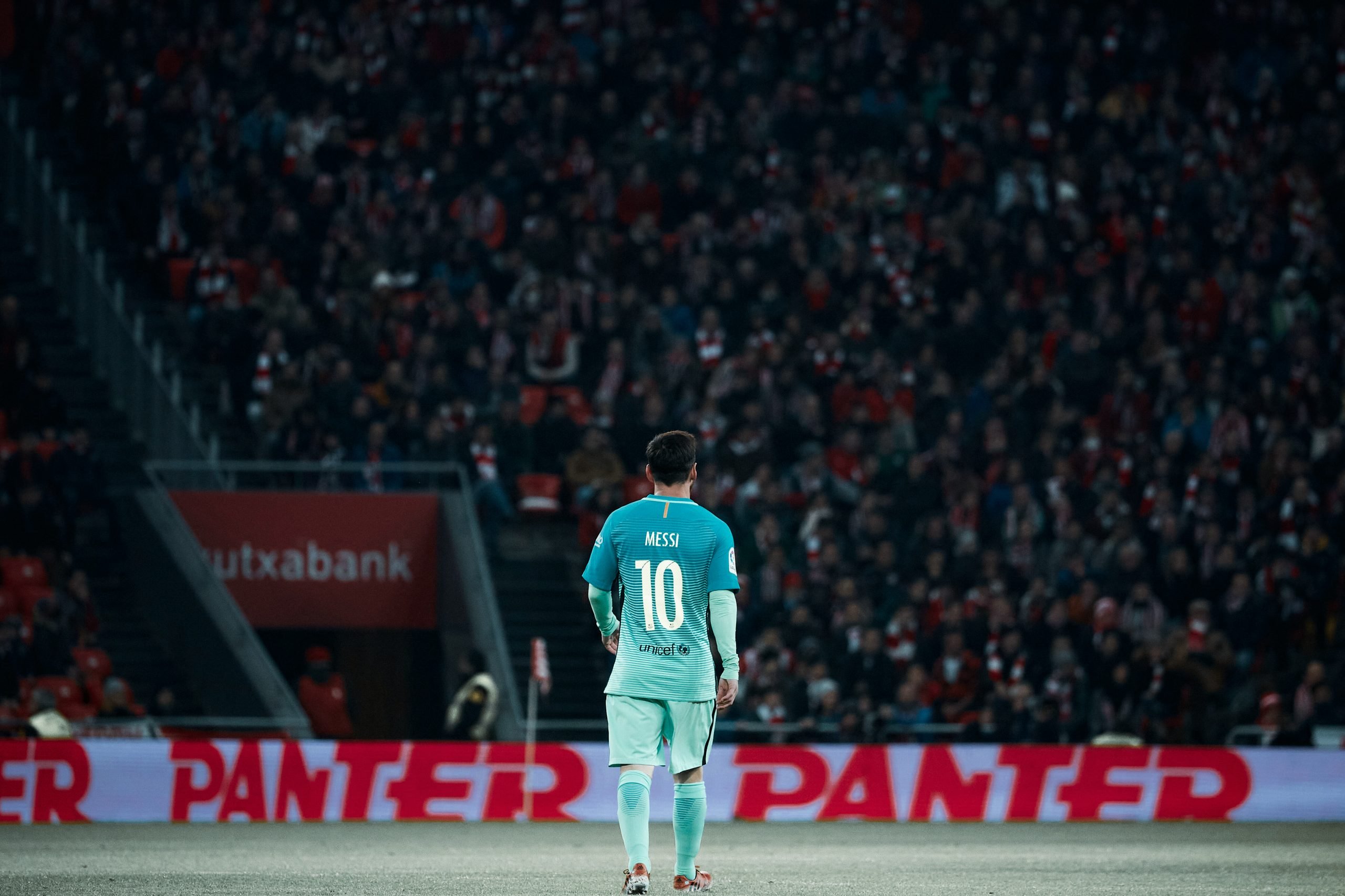 The departure of Lionel Messi has caught the footballing world by storm. The sextuple Ballon d’Or winner was on the cusp of a renewal with FC Barcelona, but in the dying embers of negotiations with the club, everything suddenly fell apart.

In light of his exit, Barça Universal explores the multifaceted repercussions of Lionel Messi’s departure.

Less money to invest into the club

It should come as no surprise to the vast majority of people that Lionel Messi is a massive marketing asset to whoever has him. Regardless of Barcelona’s misfortune in the UEFA Champions League, the Argentine was the world’s most marketable athlete of 2020.

With such a level of marketability, the Catalans are sure to take advantage of it to the best they can. And capitalise they did.

According to a number of football analysts, Barça reportedly earns around 20-30% of their overall income from Messi alone. Why so? Well, a few years back, president Joan Laporta had this to say:

As Laporta put it, every single sponsorship deal that Barcelona gets into has some form of a ‘Messi clause’, which by some estimates adds a value of around 50% to the deals.

Given he is the world’s most marketable athlete, without him, fewer companies are interested in investing large sums of money in Barcelona. Shirt sponsor Rakuten for instance, cut upwards of €25 million from their deal with Barcelona as a result of the all so infamous Messi Burofax scandal last year. Without a shadow of a doubt, more and more of Barcelona’s sponsors are set to follow suit.

Some might opt out of sponsoring the club altogether, as was the case in 2017. When Neymar Junior’s departure was announced, the likes of Sony did not extend their deal with Barcelona as a global sponsor, and the Blaugrana equally lost three regional deals with Brazil.

There is also the added problem of ticket sales and TV revenue. In the 2019/20 season, as many as 8/10 Barcelona shirts sold had his name on their back. Already this season, not a single shirt has sold more. A host of tourists would travel from all corners of the globe just to see the best footballer of all time grace their eyes with the ball at his feet.

With him gone, not all, but a significant enough portion of this money, is gone.

Reduced creativity in the team

What happens when one loses Lionel Messi? You lose an entire creative system built around his talents. From a purely statistical standpoint, the Argentine would contribute a bare minimum of 50 goals every calendar year. Even last year, one of his statistical worst in a Barcelona shirt, he contributed more goals than every single individual in the team and in Europe.

Creativity goes beyond the realm of mere goals and assists. Messi is the living brain of the team. He was their engine, their driving force. Without him in the team’s dynamics anymore, Barça lose that individual spark that would save them from the clenching jaws of defeat.

For the vast majority of players in the team, the mere presence of Messi heightened their creativity.

This productivity was symbiotic. There is no one who would find Alba’s piercing wing runs quite as Messi would regardless of year or opposition. No one could understand or work as well with Busquets as Messi. Few players would combine with Pedri as well as Messi would, as those connections have now been abruptly cut.

When looking at the players the club aimed to buy in the transfer window, this loss is made even larger. Memphis Depay made more forward runs into the penalty box than 98% of forwards as per FBRef. Messi played more progressive passes than anyone else in Europe.

Sergio Aguero is another link that Messi has lost. With all due respect to the player, Martin Braithwaite was no Luis Suarez, but Aguero could have been. Some fans had foreseen unheard of assist numbers at Barça on Messi’s part for the 2021/22 season, but those dreams have died before they were even given a chance to live.

Losing Neymar was a tough blow that Barcelona was dealt. Losing Suarez’ 20 or more goals added insult to injury. Losing Messi’s minimum 50 goals a season is going to be the hardest hit that the club have taken in quite a few decades. Such a creative output departing without any real replacement makes it even worse.

An overall decreased threat from Barça

All of Europe can attest to the claim that merely hearing the name, Lionel Messi would send shivers down their spine. After all, going up against the best footballer in history will inevitably cause Barcelona more harm than it does good.

Entire tactical systems would be moulded around putting a stop to him, but not anymore.

Without Messi in the team, Barça are still going to be a threatening team for a majority of Europeans to face, but the Garnet and Blue will not strike as much fear into their opponents as they did previously. Without him in the squad, more rivals will be confident when they come to the Camp Nou and even more excited when the Blaugrana visit their stadiums.

That X factor that Messi brought to matches, the ability to inject fear into opponents, has suddenly dissipated before our very eyes.

If during last season the mere sight of Samuel Umtiti and Clement Lenglet would have been enough to instil just that much confidence into rivals, then how much more the same squad minus a sextuple Ballon d’Or winner in their ranks.

Cognisant of Lionel Messi’s competitive spirit and undying perseverance, Barcelona, even at their worst, could count on Messi to make them competitive. Last season, in the final stretch of fixtures, despite scoring five times in five matches, the Copa America winner could only stand and watch as his team dropped a staggering 10 points out of 15, despite his best efforts.

On his part, his goals alone should have been enough to win the Catalans twelve of those 15 available points. Nevertheless, a lack of competitive edge from the likes of Samuel Umtiti, Clement Lenglet, a number of his fellow forwards and manager meant that the league title slipped from Barcelona’s grasp despite his individual efforts.

His mere presence meant that Barcelona had the edge over everyone else, almost regardless of the quality of his teammates. Bar his obvious goals and assists, the Argentine would inspire the team with a dribble, key pass, through ball, set-piece, you name it. Having him alone does not provide a guarantee that one will win, but it sure does drastically increase one’s chances of doing so.

Not having him next season, with the financial turmoil, the squad inadequacies, among a host of other issues, simply spells danger for the club. It means La Liga will be that much harder to win; that the UEFA Champions League is now a pipe dream; that the Copa del Rey, far from illustrious a trophy to behold, now has much more value, but again, is significantly harder to defend this time around.

With how everything is going, a second-place finish would be an achievement for Barça in the tournament of consistency. The overall competitiveness of the team has taken one of its biggest hits in years. It almost cannot get any worse than it already is.

More burden on everyone else

Messidependencia is a Spanish term coined to signify, quite simply, the dependence the team had on Lionel Messi on a weekly basis. There is no ignoring how much the team relied on him to save the day when he was there.

In the horrid Valverde Era, the team had never leeched onto him as they did then. In the 2018/19 season, Messi directly contributed to a staggering 54% of Barcelona’s goals. That is only direct. When accounting for pre-assists, that number could easily go up to 70%.

Last season he was at the heart of 45% of Barcelona’s total goal tally in La Liga. Given he is no longer at the club, that 45% will have to be distributed among the rest of the players.

Antoine Griezmann has had his inconsistency defended by the fact that the only footballer in the world better than him at exactly what he does was in the same club. Now the onus is on him to recover his form from his Atletico de Madrid days.

The same now goes for Memphis Depay. At Olympique Lyonnais he was the French giants’ own ‘little Messi’. He shared a host of the offensive responsibilities, and they more than paid off when one looked at his sheer productivity last season.

The midfielders will have to account for his key passes, Jordi Alba will have to find another passing target, and Busquets will just have to thread those long passes to someone else next year.

When Cristiano Ronaldo parted ways with Real Madrid, Karim Benzema did his individual best from a goalscoring standpoint, but Los Blancos were exactly 50 goals short of the tally Ronaldo added the previous year. This time round goals are sure to come in less, but the offensive responsibility will have to be properly distributed to make up for the lack of the best footballer of all time.

This will be the true test for Ronald Koeman and his men next season. Offensive productivity at near the same rate without the best footballer in the world to help them do so.