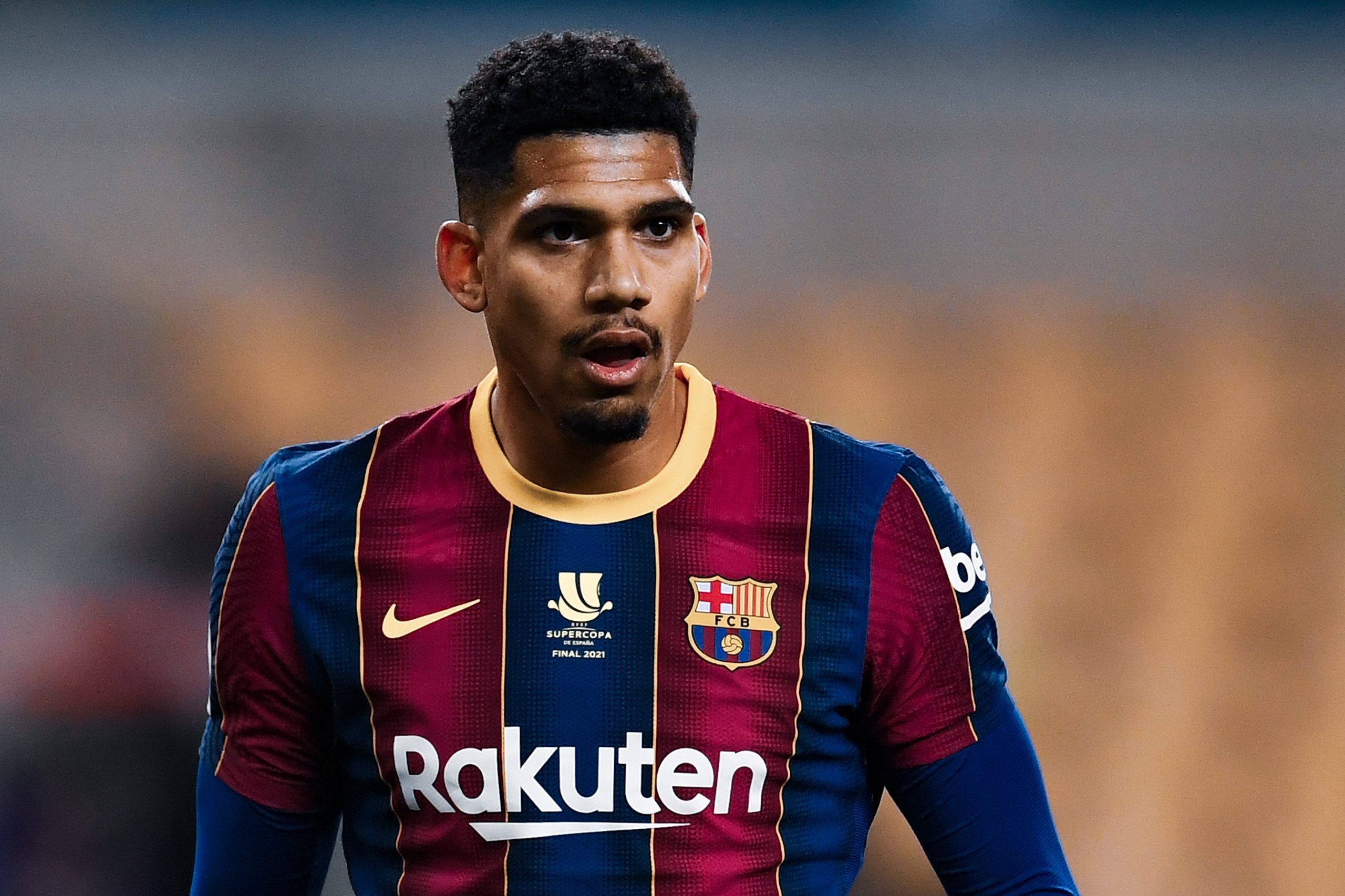 Having arrived from Uruguayan outfit Boston River at the tender age of 19, Ronald Araujo did not really stand out among his competitors. Many aspects of his game were, in fact, well below the bar usually set by players of Barça B or even the lower categories.

Given the modest cost of the investment, the signing of the young centre-back was a safe gamble, albeit one that looked unlikely to pay off.

Nevertheless, the Uruguayan has since undergone a startlingly meteoric transformation. Under the tutelage of Garcia Pimienta, he improved by leaps and bounds throughout his two-season stay with the subsidiary. It wasn’t long before he was rewarded with a first-team debut, and then promotion before the start of 20/21.

Fast forward one year, and Araujo had firmly established himself as one of the leaders of Ronald Koeman’s team. In a decently competitive environment, he has become an undisputed starter for Barcelona.

Aged just 22, it is difficult to imagine the heights that he could reach. Considering his admirable progress to date and evidently high ceiling, one may wonder: how could his career unfold from here? In this piece, we will delve into the short, and long-term prospects of Araujo’s highly promising career.

“The gem cannot be polished without friction, nor man perfected without trial.”

Though some standout qualities were already in his locker, Ronald Araujo’s start to life in Barcelona proved a struggle. His physicality and pace were almost nullified by his lack of positional prowess, immature judgment and sub-par ability on the ball. At the very start, the signing of the South American teenager could even seem utterly senseless.

The most perplexing side of the story was the fact that his shortcomings were his challengers’ strengths. Araujo was lacking in understanding of the way Barcelona played, the way that La Masia graduates already knew inside-out. Undeniably, his bid for first-team football would require a herculean effort and supreme adaptation.

Yet Garcia Pimienta did his magic again. In no time, the former Barça B manager managed to thoroughly remould the Uruguayan’s game. Inevitably, he was soon pushing usual starters Chumi and Jorge Cuenca to their boundaries and would eventually solidify his spot in the team’s starting eleven.

It was around the beginning of his second season that Araujo came knocking on the first team door, which Ernesto Valverde would later open following an array of injuries in the main side’s dynamics. His technique, ball-playing ability, positional and situational shrewdness had all drastically improved, hence why the decision was totally understandable.

His debut against Sevilla was a forgettable one, however, the youngster seeing red just eleven minutes into his cameo. It was a setback that many would have succumbed to. Yet Ronald Araujo was no stranger to the stoic ways of failure and, through sturdy determination, found his way back into the equation.

It is that resolution that defines him as a player and permitted him to crawl his way to triumph having previously cascaded down the rocky and ruthless treads of the steep ladder to success.

A steady ascent to eminence

Following the resumption of the pandemic-plagued 19/20 season, Ronald Araujo finally began to gain some ground in the first team. The youngster frequently appeared from the bench or even from minute one, with some commendable outings to his credit.

The dismissal of Quique Setien, the first coach to fully back him as a rotational option for the senior team could have hindered his progression. That was not the case, though, as Ronald Koeman instantly promoted the Uruguayan upon arrival. Step by step, he would begin to tighten the screws on Gerard Pique and Clement Lenglet.

Forcing them out of the XI was no mean feat, yet some exceptional substitute performances were solid and compelling evidence. Araujo, still 21 at the time, had already become an integral part of Koeman’s struggling Barça. His monstrous pace and physique would often compensate for the team’s defensive woes, disguising some problems that would, as if coincidentally, arise every time he was absent.

In a general picture, it was only a number of injuries that marred a tremendous campaign from the Uruguayan powerhouse. Ronald Araujo had experienced an impressively steady upward trajectory in his development, a rare occurrence for youngsters. Heading into the 21/22 season, he was widely regarded as a potential starter and crucial piece of the team’s puzzle.

However, the now 22-year-old has so far exceeded all expectations. He has firmly become one of Barcelona’s most consistent players and has also come up clutch in desperate times, his late equaliser against Granada being a prime example. Araujo’s conduct, even under the most intricate of circumstances, has been impeccable.

The Uruguayan looks to be at the top of his game (at least given his current capacities) and has enjoyed a near-flawless campaign in most aspects.

His competitive mindset, beastly acceleration and dominant physique make him a formidable force to be reckoned with in isolation. At 191cm in height, Araujo’s commanding aerial presence and neat positioning have been equally key.

His offensive output has been just as impressive. Ronald Koeman often exploited his physical dominion when Barça are trailing the opponent, and his namesake defender has not disappointed. Araujo’s hold-up play, aerial dominance and striker’s killer instinct are all qualities that have frequently come in handy.

What has stood out the most, however, is his leadership. At just 22, it is quite remarkable that Ronald Araujo’s assertive personality has inspired his teammates to this extent. His uncompromising character and relentless nature have been major contributing factors to the team’s stay afloat.

Judging by his decisiveness and consistency thus far, it would not be a far-fetched suggestion to name Ronald Araujo as one of Barcelona’s top performers in this burdensome season. In Koeman’s faulty defensive structure, the Uruguayan beast was a breath of fresh air, a figure to rely on. It is no surprise that in his absence, the team’s frailties have transpired; such is his influence.

Still some ground to make up

Yet as the case is with most youngsters, Ronald Araujo still has some aspects to polish before he is propelled to the top-notch class. In particular, there are two fields where improvement is a desideratum – his on-the-ball qualities and proactivity.

We will start with the former. Though the past three years have beheld a tangible leap forward in his technique, Araujo is still well below the requisite level.

When building out from the back, each detail is substantive, and the 22-year-old is yet to master the subtlety of passing weight, first touch and timing. While this weakness does not usually convert into fatal errors, it can hamper Barça’s progression from the back.

Statistics show that the Uruguayan averages a measly 0.9 successful long balls per 90 in comparison to 3.3 and 2.7 for Gerard Pique and Eric Garcia respectively. This insinuates a clear reluctance to take risks on the ball. As a result, he has often arisen as the bottleneck of Barcelona’s build-up. There is undoubtedly a ton of room for improvement in that regard.

The other deficiency of his, and perhaps the most prominent of them all, is his lack of proactivity. When the team wants to regain possession, it is essential for the defender to keep his opponent at bay.

That is done by following him closely and eliminating any opportunity of a turn towards the face of the goal. This is not just a growing trend, being more of a necessity given the demands of the game’s outrageous intensity.

Ronald Araujo has time and again failed to comply with this unwritten law composed by the evolution of football. When it comes to pressing or a high-placed defence, he has often been hesitant to follow his man. That has resulted in excessive time and space allowed to the opponent, which poses immense peril to Barcelona’s already fragile structure.

His frequent injury woes have also come to haunt him time and again of late. His technical ability is undisputed, but it will all be for nothing if the 22-year old cannot stay fit consistently.

There are two prime occasions where those faults of the Uruguayan cropped up. Against Bayern Munich, he never ventured far in his pursuit of Leroy Sane, thus handing them an additional passing option.

The most recent example, meanwhile, is the encounter with Atletico, where Joao Felix ran circles around the typically fearsome defender. And the problem is that, once the error is committed, there is barely any way to atone for it.

A bright future ahead

When he joined Barça B, it was clear that his game would demand a sea change for him to reach the first team. It was an unlikely prospect, but one that Ronald Araujo embraced and never let go of. Through inhumane determination and admirable tenacity, the 22-year-old has undergone a whirlwind-like transformation.

His path to success has been rapid, but by no means straightforward. As of late, Araujo has finally found his mojo, a crucial step towards ensuring a steady development. Although significant, his weaknesses are few in number, especially for a player of his age.

Under the demanding leadership of the new boss Xavi, there is massive expectation for this gem of a defender to stay technically sharp and physically in peak shape if he is to reach the upper echelons of the footballing pyramid, which he is more than capable of doing.

As such, one can comfortably infer that barring any unexpected twist of events, there is no doubt that Ronald Araújo is destined for the pinnacle of the sport, hopefully, whilst donning the blaugrana colours.