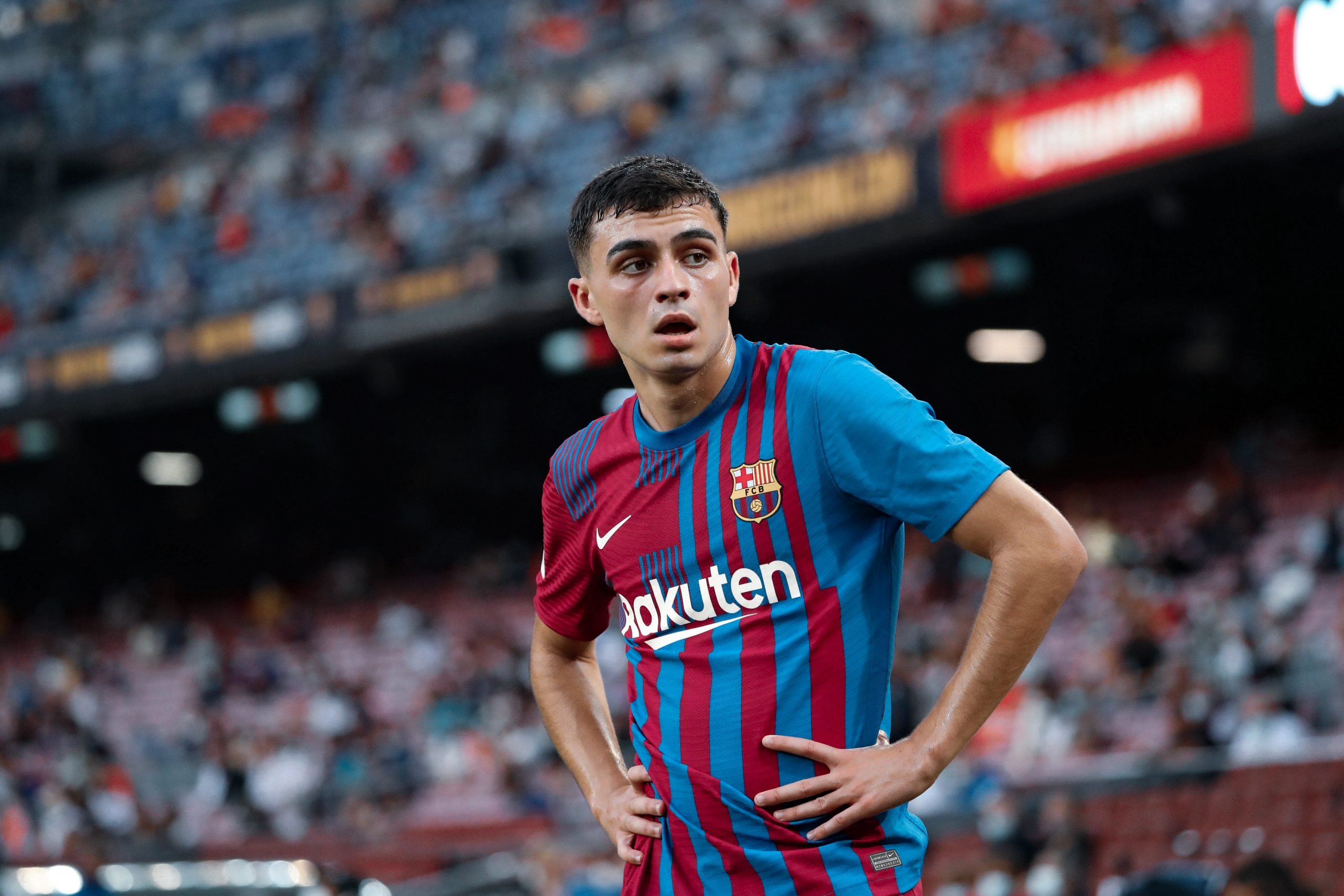 Little under a week ago, Pedro González, or as he is more colloquially known, Pedri, celebrated his first anniversary with Barcelona. He ended the year having played a whopping 73 games across all competitions for the Spanish National Team and Futbol Club Barcelona, leaving aghast and agape the mouths of all those who bore witness to his brilliance.

Despite his tender age of 18, the Spaniard possesses a technical astuteness well beyond his years. As such, the youngster has ended up being the recipient of praise from all his oagers, which in itself translated to plenty of appearances on the pitch.

The question to be asked to the player and his managers is, just how much is too much? Granted, Pedri is a precociously talented footballer, the sheer number of matches played, which in and of themselves were more than every single footballer in Europe, can be categorised as too many, can they not?

In light of his recent injury, Barça Universal explores the irresponsible actions both from Pedri to those above him leading up to it.

The boy who dreamed

A Barcelona fan from his youth, Pedri has always aspired to defend the garnet and blue. Once given the opportunity to do so, he took it with open arms and never let it go. His performances for most matches reflected his maturity, perseverance, and sheer dedication to the badge.

📸 — Pedri, then and now. pic.twitter.com/vglqPXg5BD

This is not inherently bad, and if anything, these are attitudes that the vast majority of Cules want to see in all their players. The problem comes with moderation, which in Pedri’s case does not seem to exist.

At his age, one can easily be blinded with the allure of playing matches, under some false impression that what he is doing is sustainable in the long term, when in reality playing as he does is far from it.

“I’m not tired, I always try to rest, it’s not hard for me to get some sleep and that helps me a lot.”

Pedri seems to believe that he can go on playing forever, but regardless of age, everyone needs rest. At his age especially, as has been the case with several players who got into the spotlight as early into their careers as he did, playing this many minutes has long term detrimental effects to one’s body.

As has now become a force of habit, the 18-year-old will respond to all doubts of his fitness by saying that he is perfectly fine, yet as was the case towards the end of the campaign, the honest answer was quite evidently not what he gave.

His performances started to become more and more sloppy, his movements all the more lethargic and his endurance, which up until then had been exemplary, became comical. Pedri’s body desperately pleaded for rest that his heart and mind would never allow it to have.

Even with injury scares, his never die attitude, as impressive as it was, gradually became a source of worry. A case in point would be in Barça’s 2-1 victory over Real Sociedad.

In addition to his incredible display in central midfield for the hosts, Pedri made a stunning save to ensure that La Real would not end up getting a share of the spoils. This almost came at the cost of his hip. The the aftermath of this heroic act had his body wrap almost entirely around the post, resulting in him coming off the pitch with a quarter an hour to go.

At the peak of Ronald Koeman’s football, he suffered an injury that was supposed to have him ruled out of the Copa Del Rey semifinal clash against Sevilla and the two weeks that followed, but Pedri’s stunning physical state has other ideas.

What should have taken a fortnight to heal was brushed off overnight, as a mere two days after his injury, Pedri was back training with the team.

Given his individual quality, he took the match in his stride, racking up a phenomenal 89 minutes against Los Nervionenses as the Catalans won by three goals to nil.

In the European Championships that followed, the Spaniard would play all but one of the 630 minutes that Spain had at the continental showpiece. Such was the level of his football that Luis Enrique waxed lyrical about the dexterity he possessed, which had never been seen at that age, going even as far as to compare him to Andres Iniesta.

Pedri is innocent. All he wants to do is play and maximise his chances of doing so, and for his valiant efforts, he was rewarded with a Euro Young Player of the Tournament award.

In the recently concluded Tokyo Olympic games, much of the same occurred. While Luis De La Fuente was more open to substituting him than the other two, he still started all matches in Japan and ended what ideally should have been a holiday with thirteen matches under his belt, when the vast majority of his teammates had a maximum of seven.

As always, he would, almost like his personal mantra, say that he was okay, that he was in no state of fatigue, but his eyes and legs told an entirely different story. He was visibly less capable of imposing himself in matches, and his overall presence dwindled as time went by.

Such actions, as aforementioned, are explicable by the mere fact that as a youngster, his utmost desire is to play. Nevertheless, this should be handled with caution on his part, some he did not take in the slightest.

The mere fact that Pedri is an adult does not mean that he should be entirely autonomous in making decisions as big as he already has in his career. The pertinent risk of burnout, one which has ruthlessly devoured others with similar starts to their respective careers, might come to haunt him despite how much promise he holds.

Jack Wilshere was touted to become the next big thing from England. After a superb start to his professional career, he was hit with recurring injuries due to being overplayed.

Cesc Fabregas and Wayne Rooney are two other players who possibly did not achieve as much brilliance as they could have after having their careers slowed down.

Pedri needed good advice from his seniors but conversely was told to maintain the bad habits he was already practising. Not a single voice in his entourage would ask him to rest, and with his burning desire to play, naturally, neither did he.

Breaks were never a word in his vocabulary, and now he pays the price for his decision making, but given it did not happen entirely alone, there is no need to single him out.

A case of poor man management

While it is true that Pedri showed next to no desire to take breaks, these decisions were not made unilaterally. After all, players will only feature in matches that their managers want them to.

If at all they feel that one deserves rest when up against low-risk opposition, then the starter could take some minutes off so as to freshen up for the subsequent encounter; not with Pedri.

73 matches across six competitions in a mere ten and a half months of football. That is the cross that Ronald Koeman, Luis Enrique, and his U-23 counterpart Luis De La Fuente cast down on the shoulders of their young protege.

Of course, the lion’s share of this blame belongs to his manager at club level, as he was at the heart of at least 50 of those appearances.

When it comes to Barcelona, Koeman could not stake a claim that his use of Pedri, which many among the football Twittersphere jokingly dubbed child abuse, was born out of a lack of alternatives. The Dutch manager has one of the world’s best football academy at his disposal and actively chose not to use the cornucopia of resources within it.

Names ranging from Riqui Puig, and Alex Collado to Jando Orellana (who reportedly, by Koeman’s request, moved to the central midfield), were at arm’s length but never considered as options. Ultimately he went with the now-departed Ilaix Moriba, but this was only towards the end of the domestic season when all had been said and done.

It mattered not if Pedri was dragging his waney feet across the grass in the Nou Camp, the Dutchman put his best foot forward when it came to extracting all that he could from the 18-year-old. In last season’s edition of La Liga, he featured in all but one game, this too coming on the final day of the season when the team had nothing to lose.

Pedri would play every high-intensity fixture and give his all for the badge, but for his all to be consistently the best he could provide, he needed more time to charge his batteries. He was rushed right back into matches he never needed to play, and because of circumstances outside his control, he ended up stripped of a much needed holiday.

Slight rotation to give him rest and inexcusable neglect to those who would have almost seamlessly slotted into his spot was the theme of his season.

The same was the case with the other two managers. As was mentioned before, Enrique used him in all but one minute of the Euros, with these sixty seconds, he was granted to catch a breath coming in La Roja’s defeat to Italy in the semifinals.

Even Thiago Alcantara, indubitably a world class midfielder and an asset for a team playing positional football, was of little use to the former Barça manager.

Overplayed, he was once more, and worse, by the youth manager. One would think that given his background, he would do a better job at allocating time for Pedri to rest, but even he couldn’t care less. Barcelona asked first-hand that Pedri be given time to rest and that he miss out on the Olympic games, but their words fell on deaf ears.

It is pretty ironic that everyone wanted a piece of him, and now, due to their irresponsible acts despite their vast cumulative experience in the management of youth, none can have him.

The road to hell is paved with good intentions, and nowhere is this better illustrated than with the case of Pedri and his managers. It is evident that his talent is something all and sundry want to take advantage of, but concurrently, they must know how best to lest they end up extinguishing it entirely.

None of these managers can complain about lacking options in the midfield, and therefore none can give the excuse that they lack depth. Gavi, Carlos Soler, Riqui Puig, and even Sergi Roberto could easily slot into the dynamics of these managers when, and not if, the need arises.

Pedri will only have one career as a professional footballer. While enthusiastic about playing, a repeat of the same mannerisms could spell a premature end to what could be quite a beautiful story. He should develop a better sense of when to stop and take a breather, and his managers should, by virtue of it being their role, manage him and his minutes better.