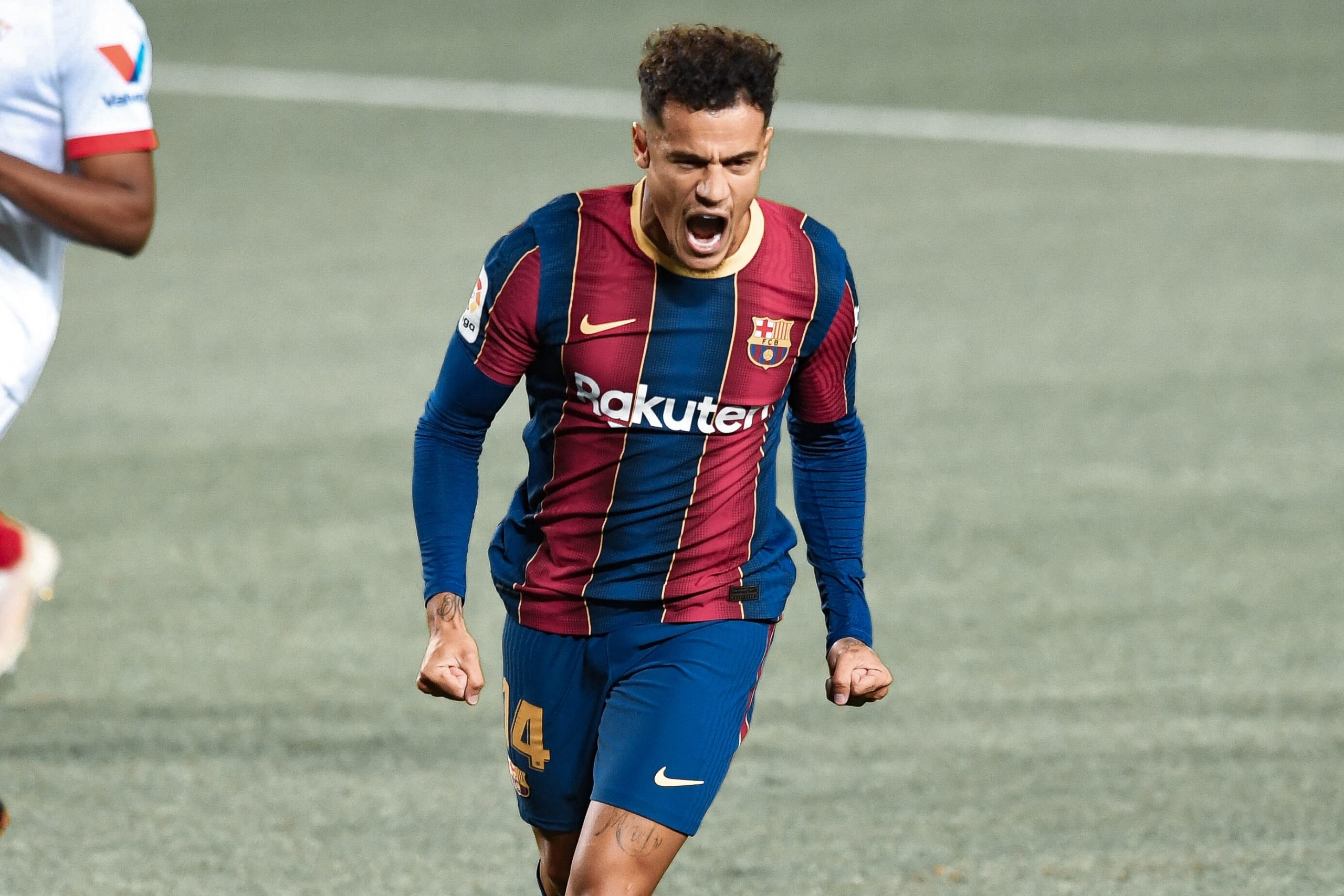 Philippe Coutinho went from getting his dream move to being dispensable for financial and footballing reasons. Here’s how Barcelona’s record signing turned out to be yet another failed transfer.

The Story so far

The infamous departure of Neymar Jr. was the catalyst to many changes around top European clubs. One such move was Philippe Coutinho to Barcelona during the winter window of the 2017/18 season. After months of speculation, rumours, multiple bids, Liverpool finally gave in after the Brazilian submitted a transfer request to the club. The little magician finally got his dream move, with the Merseyside club exploiting the then cash-rich Barça in the transfer fee.

The 2017/18 season was a difficult season for Barcelona. Still reeling from the departure of Neymar, incoming manager Ernesto Valverde decided to go for defensive solidity over attacking flexibility. The Basque manager went for a pragmatic 4-4-2 with four midfielders packing the middle. Despite arriving during the winter whilst carrying an injury, Coutinho excelled as the fourth midfielder.

The Brazilian was cup-tied in the Champions League and was only allowed to play in the domestic competitions. And he excelled in La Liga as he finished the season with 13 goal contributions in just 18 appearances. He also scored a hattrick in the second last game of the season, but for a losing cause. Barça lost to Levante 5-4 in a heart-rending end to their unbeaten La Liga campaign.

Coutinho’s performances in the league and the last few Copa del Rey games gave the Culés hope for the Champions League next season as they just witnessed a mortifying collapse at Rome.

When Coutinho signed for Barcelona, there was always uncertainty over his role. Was the Brazilian replacing his fellow countryman, or was he the replacement for Andrés Iniesta, who left the following season? The Catalans soon found out it was neither in the next campaign as Valverde moved back to 4-3-3 after heavy criticism of the pragmatic approach.

At Liverpool, Coutinho extensively played centrally in a number ten role with everything going through him in the attacking phase. At Barça, Lionel Messi was there to fulfil that role and much more with it. The Brazilian had to slot in either at the wing or as an advanced ‘8’ in a three-man midfield. The gaffer preferred him on the wings as his defensive inputs weren’t enough to play in the middle.

The former Liverpool man was blessed with plenty of skills on the ball and the craftwork to pull it off. For all the Brazilian flair, he lacked that burst of acceleration to beat opponents on the wing. The Catalans needed a winger who could play without the ball at his feet, constantly making runs behind the defensive line. With Suarez making very few of these runs lately and Messi playing as the conductor Coutinho needed to do things that complemented these traits.

The Brazilian struggled to make an impact in games, with fans criticism further damaging his confidence. He finished with the same goal return as the previous campaign despite playing the complete season in both UCL and the league. Adding fuel to the fire, Liverpool humiliated Barça at Anfield and went onto win the Champions League.

The loan at Bayern Munich and a shot at redemption

The poor form, financial strain, and the arrival of Antonie Griezmann meant the Catalans had to move Coutinho somewhere. Bayern Munich wanted a quality backup for their starters and promptly signed him on a loan deal paying his wages apart from the loan fee. More than anything, the Brazilian was happy in Germany. The weight of his price tag was no longer on his shoulders anymore.

Bayern were few of the teams in Europe deploying 4-2-3-1 with a number ’10’ acting in between the lines. The German champions struggled under Niko Kovač, but once Hansi Flick took over, no one could stop them. Thomas Müller got back to his best and was the undisputed starter in Coutinho’s position. The Brazilian, however, acted as an able deputy for the German. He was also deployed on the left-wing, filling in for Kingsley Coman and Serge Gnabry.

Coutinho successfully recovered his mojo and won every trophy they competed in. And to add a cherry on top of the sundae, he came on as a substitute to score twice and assist in the infamous 8-2 victory against Barça. Despite the fairly impressive performances, Bayern were never going to cash in on the €120m buying clause. With Ronald Koeman very keen on including him in the plans, the Brazilian came back to the Catalans.

When Ronald Koeman took over at the Camp Nou, it was evident that his preferred formation was 4-2-3-1. And Coutinho was the perfect choice to play in the hole. He continued his inspired form at the start of the season, with every Barça attack going through him.

The 28-year-old received between the lines and was a constant menace for the opposition. With Lionel Messi struck in a transfer drama and looking out of touch, Coutinho stepping up helped the team a little. After a brisk start, injury struck again post the El Clasico.

As the Brazilian slowly got back to full fitness, Ronald Koeman changed systems and went for the traditional 4-3-3 in search of better stability. Pedri slowly but surely merited his starting spot, and Coutinho was only getting minutes off the bench. By the end of the year, he ruptured his Outer Meniscus and is yet to recover. Right now, Koeman has made even more changes to the structure, and with the team performing better than ever, and there’s little room to accommodate him.

Barcelona under Josep Maria Bartomeu went for the galactico model after Neymar left, among many other questionable decisions. With €222m in their pockets, all the clubs exploited them by raising the prices. Barça signed Coutinho from Liverpool in a deal that could stretch up to €160m if all clauses were satisfied. Now, with the 28-year-old on 90 appearances for the Catalans, making him play ten more games could cost Barça up to €20m.

The current financial position of the club is exceedingly critical. Humongous wage bills, millions owed to clubs for previous transfers, and the general hit in revenue due to COVID-19 have crippled the club. In this situation, playing him and paying €20m to Liverpool and up to €7m per year in wages is far from ideal.

Three years have passed, and the Catalans are yet to gain dividends on their investment in the Brazilian. Constant injuries, subpar performances, tactical inflexibility and many other reasons have restrained him from making an impact in the Blaugrana shirt. Now, with another injury and surgery further hampering his season, the journey might be coming to a premature end. Barça’s financial crisis puts Coutinho right back into the transfer list.

Football has slowly moved away from the usage of a natural ’10’. Very few of the top teams in Europe use the role. Managers have struggled to incorporate players like James Rodriguez, Mesut Ozil, Paulo Dybala in recent times. Coutinho faces a similar dilemma which leaves him with very few teams to choose from.

With his high wages, only a few clubs could afford the Brazilian, probably from the Premier League. Liverpool could bring back their star boy to take some of the creative burdens. With Georginio Wijnaldum and James Milner possibly leaving, an extra midfielder would be an upgrade alongside Curtis Jones. Another possible destination could be Arsenal if they fail to sign Martin Ødegaard permanently.

What started as a dream move has to, unfortunately, end as an offloading. While Coutinho’s injuries, adaptability may have played a part, ultimately, his humongous price tag and his failure to live up to it would be the final nail in the coffin. There’s very little chance right now for Culés to see the little magician in the Garnet and Blue of again.