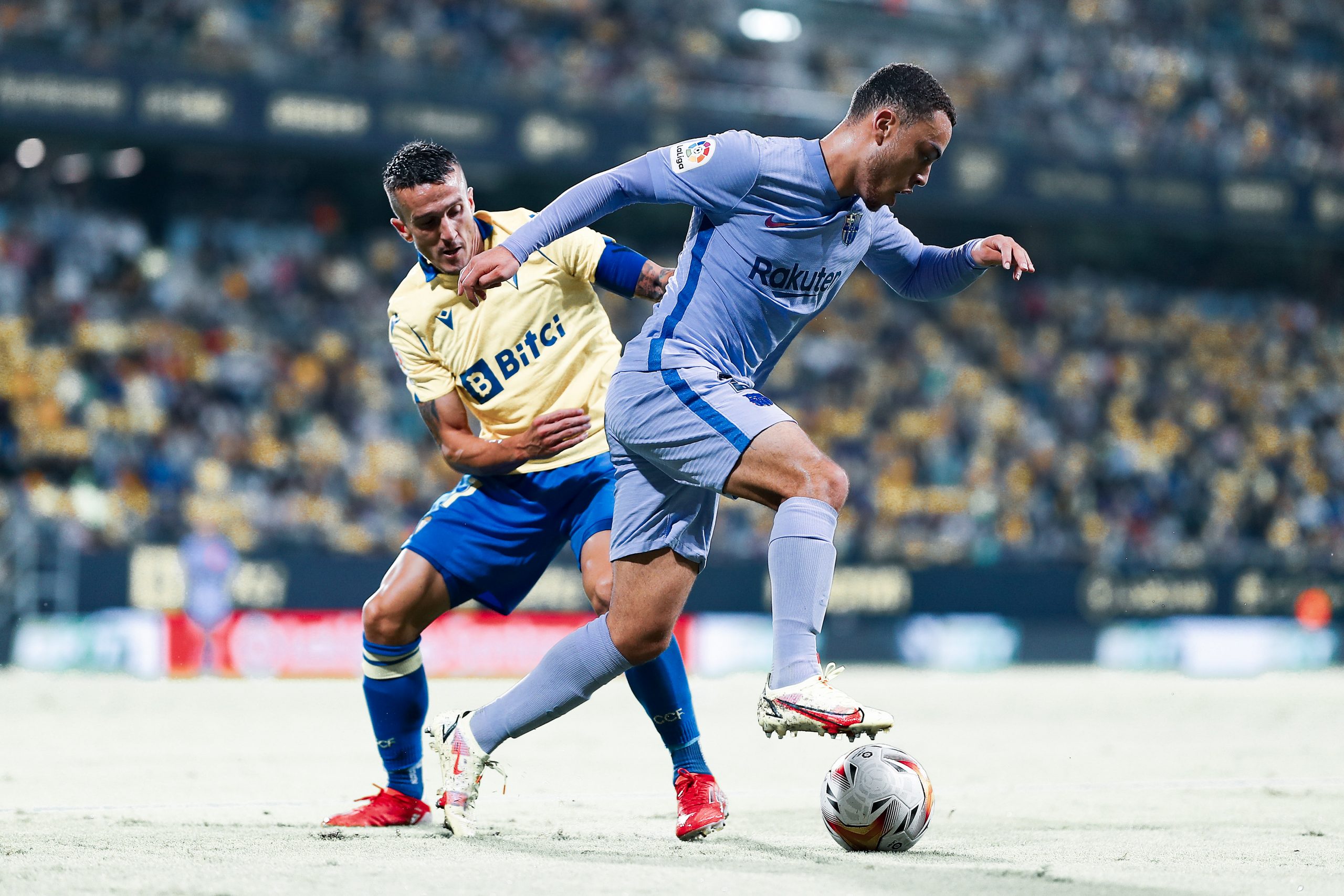 The 2021/22 season has shown several deficiencies within the Barcelona squad, especially a depleted attacking unit. From widespread injuries to tactical inefficiencies that accentuate the team’s weaknesses, Barça have never positively seemed to find respite this season.

Owing to the fact that the team is suffering through an injury epidemic, a number of players have been forced to play in positions novel to them. In the tie against Atletico de Madrid, just four players could truly be said to have played in their veritable positions, for example.

For the third game in a row, Sergino Dest has had to occupy the left-back position. His performances in the role have been a mixed bag, with some asking that he be permanently be reinstated there given his one good game against Levante, while others quiver at the prospect of such a precociously talented individual being wasted in a position far from being his own.

In this article, Barça Universal explores why Sergino Dest’s future truly lies in the right and not left-back position.

Perfecting his craft: Dest at right-back

Thus far in his relatively short career, the only barometer with which Sergino Dest’s performances can be measured is his time at Barcelona. Granted, he has spent all his time at the club under one of its historically most tactically challenged managers in Ronald Koeman, the writing on the wall is more in line with a future in his natural position rather than one in the left-back role.

Quite simply, the American has routinely shown little competence in the position. Sure, against Levante, his performance left some room for optimism. Regardless, he has otherwise been average at best in the role on more occasions than he has not, and given his tactical profile, it is easy to understand precisely why that is.

As a right-footed fullback, the best way to take advantage of what the Barça number 2 has to offer is to keep him where he is most potent — on the right flank.

Any diversion from this opens up room for failure, and as a young player still in need of progress and very much still entrenched in the learning process, taking away any form of stability and order from him is quite simply a recipe for disaster.

Versatility is and has always been welcome, but never should it come at the cost of performance, especially in the long term. Look no further than his ‘compatriot’ at right-back, Sergi Roberto, whose development has stagnated for years and years because of an inability to find any tangible form of stability. As of right now, the Catalan is a faceless entity, with no natural position, wandering about the squad looking for a place to call home.

The left-wing is a position Dest should occupy if and only if there is no other alternative insight. Turning a stop-gap solution into something long term will be disastrous not only for his development as a player but also that of others who would otherwise have done a better job at replacing him.

If Dest becomes a left-back, then what happens to Alejandro Balde or Oscar Mingueza. Will a natural left-back now be benched, and will a centre-back now be tasked with providing width for years just so the American himself can play out of position? That is not all that reasonable.

In-game, having Dest play in the left flank means that some precious seconds are inevitably going to be lost trying to catch up to his changes in body orientation. This being a league as tough as La Liga, one where there is statistically the least football played in 90 minutes (with little over 50 minutes), such valuable time cannot be lost consistently.

By default, the American is forced to either make intricate crosses on his left foot or halt a run to then move the ball to the other foot to play in a cross. This naturally decreases not only his productivity but also that of the team as a result.

As a right-back, Dest is far from perfect, and one of the things genuinely guaranteeing him the first-team role is a lack of much better alternatives. With this at his clear and obvious advantage at his disposal, Barcelona has a simple choice to make: to hone his skills until they form the best footballer they possibly can, while the time to do so is available to them.

His positional awareness is in the gradual process of improving, and so too his decision-making ability. He is not yet a finished product, and the cheapest way to stunt his growth as a footballer, even going to the point of having him start to regress, would be to make him switch positions before he gains a true mastery of that which is most natural to him first.

Barça’s current system, especially, the onus is often on Dest to offer permanent width. This is not necessarily the best of roles in which modern right-backs play, but it is what he has proven to be better than anyone else at the club at doing.

In this role, much like traditional wingers back in the day, the Barça number 2 takes on his rivals using his sumptuous first touch. Once in the final third of the pitch, his role is to play crosses or cutbacks for the striker into the penalty area.

When accompanied by another winger, take matches he played in tandem with Francisco Trincao or Ousmane Dembele, he has demonstrated – though perhaps not on the most consistent basis – that he can cause a great deal of trouble to rivals who do not know any better.

The sheer depth of talent that he possesses goes almost entirely to waste when he is played in the left flank. Crosses with his weak foot become the norm, and given he is running at players on the opposite side of his strong foot, the probability of him losing the ball and falling victim to a counter-attack is significantly high.

Granted, these are mistakes that can and do happen even when he plays in his preferred right flank, he is much more vulnerable and therefore significantly easier exposed when he is in the left flank.

Dest is merely 20 years of age, and at his best, he has demonstrated that he very much can be among the greatest; someday. He possesses a seemingly innate sense of tranquillity on the ball, and now all that remains is a better guide than Koeman to take him to the next level. Even as a right-back, there is so much he is yet to learn.

With the way football trends seem to be going, we are yet to see Dest appropriate the role of an inverted fullback (which in its most basic terminology is a fullback who sticks close to the defence, going on either side of the pivot to add to the numbers in the midfield). Even in his role as an offensive fullback, he is still perfecting his craft.

Using him permanently as a left-back is a waste of everyone’s time and effort. With such low levels of productivity, then there is little reason to have this become a long-term solution.

Having an asset such as Sergino Dest is a blessing Barcelona could only dream of a few years back. He possesses a great deal of versatility and is on a constant stage of evolution and discovery.

On some occasions, he has given off the impression that he might have a future in the left-back position, but in most others, he has proven that this is not the best possible use the club can make of him.

There is much he is yet to learn as a right-back, and rather than use this as an excuse to throw him into the left-back position long term, his skills should better be honed to take advantage of all that he has to offer as a right-back.

Dest has what it takes to be one of the very best, and the key to unlocking it would obviously pass through better management, but also avoiding the mistake of uprooting him from grounds he is still learning to inhabit.

This could have the same consequences as it has had on Sergi Roberto, where an otherwise decent footballer has had his individual level gradually decline over many years. At his tender age, this is the last thing the club would want to do to Dest, especially when it comes to someone who could serve them for at least the next decade.