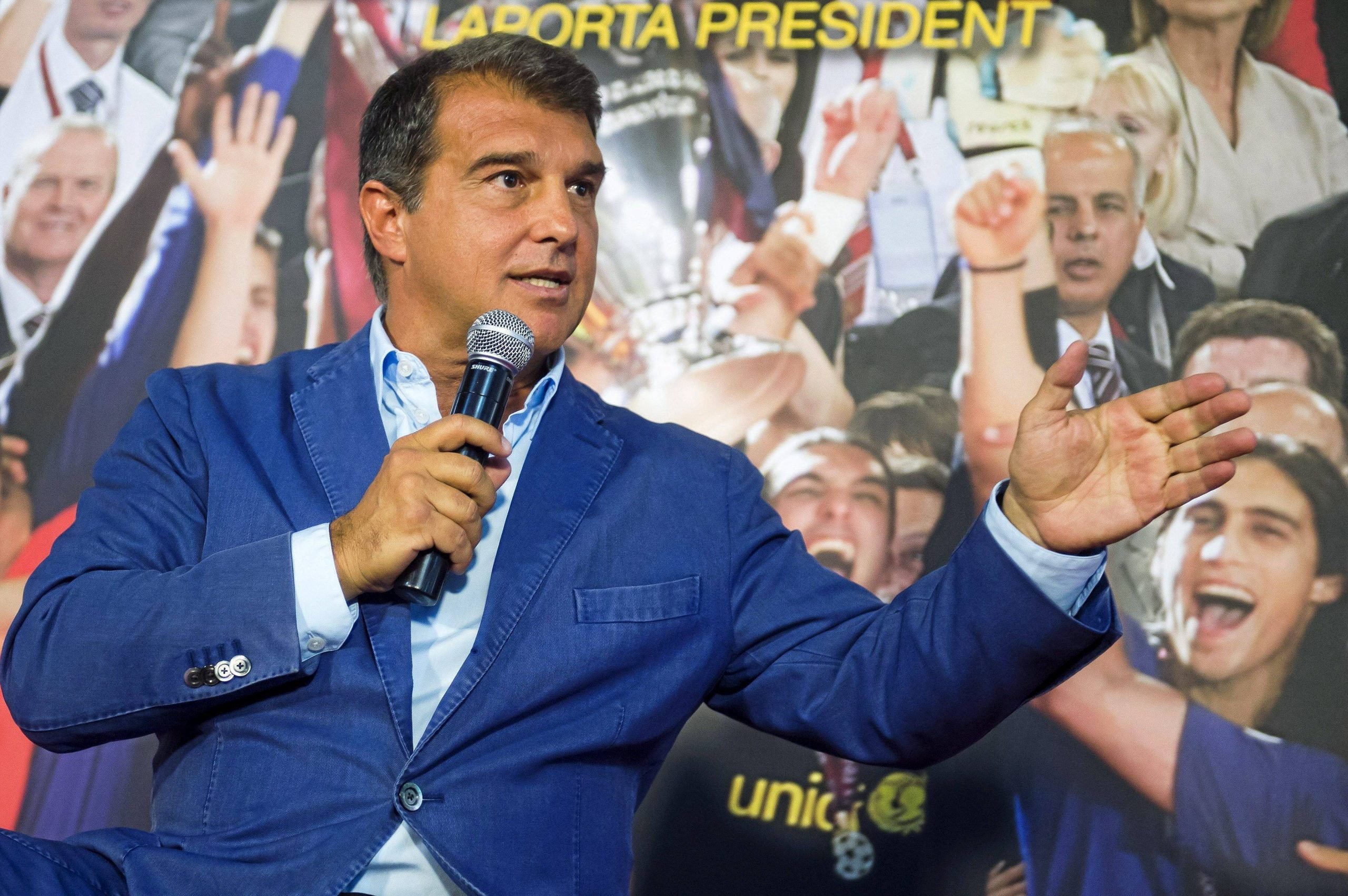 It was inevitable, but after months of rumours, hints, and speculation, Joan Laporta has officially announced his campaign to run for the upcoming Barcelona Presidential elections.

A lawyer by profession, Laporta was Barcelona president between 2003 to 2010, a tenure during which the club lifted its second European trophy – the first in the Champions League era —, and also won the elusive treble in 2009.

Laporta has called his campaign, ‘Estimem el Barça’, which roughly translates to ‘We Love Barça’. He spoke about it during the launch, saying:

“I love Barça, I love the fans, and I love La Masia. We have a plan to return Barça to the path of success and return it to the forefront of world football. And that’s why I need your support. We can’t fix the world, but we can make it a little better. We want to do it with work, passion and love. Our plan is to bring happiness back to people. It is not a mere election promise. It is an ethical, civic, moral, social and solidarity commitment.”

Laporta mentioned the late Johann Cruyff in his speech, talking about how the club should build on the foundation laid by the great man.

“Johan Cruyff showed us the way, thanks to all his knowledge as both a coach and a player.”

He moved to speak about La Masia – once a factory which rolled out world-class talent, and now ignored for several years.

“We must renovate La Masia. We will work on rebuilding it and making it the world’s best school once again.”

He continued to state the goals of his presidential term, when and if he is elected, stretching from the financial condition of the club to the goal of the Champions League.

“Millions of fans want to see a new stage and a new Barça. A player must feel the responsibility that comes with wearing the Barcelona shirt.”

On the Champions League — a title which has eluded Barcelona for several years now, and rather spectacularly so, Laporta said that it would be the club’s top priority.

“We will work on the importance of the Champions League which will be our goal every season.”

He also goes on to mention Lionel Messi, extensively, and how keeping him at the club will be a page earmarked in the book if he goes on to become Barcelona President for a second tenure.

“I will never forget the look in the eyes of the 20-year-old kid when I told him that he will be the Barcelona captain and will wear the number 10 jersey one day. No one can doubt Messi’s love for Barcelona. I haven’t spoken to Messi yet, but we respect each other and he has time to decide.

“Messi loves Barça and I’m sure he can give the club a chance. I will be able to, at the right time, have a conversation with him and help him make the right decision. To keep the best player of all time happy, you have to have a good team.”

The topic of conversation moved on to the financial situation of the club, which has been in grave danger for several years now. Laporta talked about how it will be his board’s first order of business en-route building a great team.

“We’ve evaluated the financial situation of the club and it’s very delicate. Now it’s time to bring out the suitcase, roll up our slevees, and start working hard to build a competitive team.”

He then mentions how they plan to build from the ground up in terms of revenue, “We will devise new ways to increase the club’s revenue.”

Naturally, after reports linked him to wanting Erling Haaland at the club, there were questions about the players he wanted to sign for the club. Questions which he addressed, but rather discreetly.

“I will not discuss the signings we want to make because it would be disrespectful to the player and the club.”

His main competition, Victor Font has openly talked about wanting Xavi at the club as the manager, so the topic of conversation shifted to the legendary Spaniard. Laporta revealed nothing but had high praise for the Al Sadd manager: “I haven’t spoken to Xavi, but I respect him a lot. He should be a reference for all players and La Masia.”

In continuation with this quote about Xavi, Laporta had to talk about Ronald Koeman, who is currently at the helm for Barcelona.

“Ronald Koeman deserves respect. He’s one of Barça’s greats. He has a valid contract and we need to understand his situation, it is very difficult. He’s our manager.”

As it stands, even though Laporta has announced his decision to stand as the President, albeit too late, he is the only clear cut competition to Font. The former Barcelona president was asked about if he would have a pact with Font, so as to not split the voter base: “My team and I have a very defined project. I do not see alliances happening.”

The topic was brought back to Lionel Messi, as it always has in the past half-a-year. Even Laporta seemed uninterested in answering more questions about the six-time Ballon d’Or winner.

“With Leo, it’s not a question of money, so we must convince him. His family are happy here in Catalonia.”

“Moratti (former Inter CEO) came to me and offered me €250M in exchange for Messi, and I said no. It is true that Messi wanted to leave this summer, he was very disappointed by how they treated him, but I will not enter this matter.”

In an attempt to get hints about his transfer targets, Joan Laporta was asked to choose between Erling Haaland and Kylian Mbappe for Barcelona. The Spanish lawyer did not give into the ruse, skipping past the question with a diplomatic response.

“They are two very great players, but first, before signing I would look at who we have at home. I don’t want to destabilize the squad because I want to win.”

Laporta then talked about his attempt to run for Presidency in 2015, which he eventually lost to Josep Maria Bartomeu.

“In 2015, I wasn’t going to run for the presidency, but I did everything last minute because some players in the dressing room asked me to. I received 15,000 votes in 2015 when I didn’t even prepare well.”

Speaking about the economical situation of the club, Laporta mentioned holding the previous board responsible, through ‘action of responsibility’, which would mean that Bartomeu and his board of directors would have to pay for the losses through their pockets.

“If the economic situation is perhaps worse than we expect, we will look into an ‘action of responsibility’ to be held.”

“I am clear with our sporting project. We want players who are happy with themselves and each other. We want them to feel valued. The manager will manage, the sporting directors will take the decisions and the board will monitor everything.”

Barcelona fans are well aware of the relationship between Laporta and Pep Guardiola, the manager who guided the team to six trophies in 2009. There have been various rumours suggesting that Laporta would try to bring Guardiola back to the club when and if he becomes President.

“My friend, I told him if you’re happy in City so congratulations, that’s what he should do. But surely we all want him to come back to Barcelona. We can win with Guardiola again.”

The media asked Laporta about his time with the club, and if he felt poorly treated, with journalists name-listing Sandro Rosell.

“If you want to know about Sandro Rosell, ask him yourself, not to me. I didn’t feel mistreated when I left the club. I did feel bad about what happened to us after what we did for the club. But there were a few people who have always treated me well.”

In the end, Laporta went on to describe what his view of the club is, and what he expects Barcelona to become in the near future. He answered it with a wholesome, prophetic statement, saying

“With the Barça that we aim for, everyone’s welcome. That is the way that I work. We want Barça to represent a sense of optimism in every region of the world.”

He continued on the same beat of the drum, saying, “I’m not gonna change what I think. At Barça, every ideology is welcome, including mine. Right now it’s our absolute priority to become the reference of world football again.”

Quotes covered from his live speech during the presentation of his candidacy.