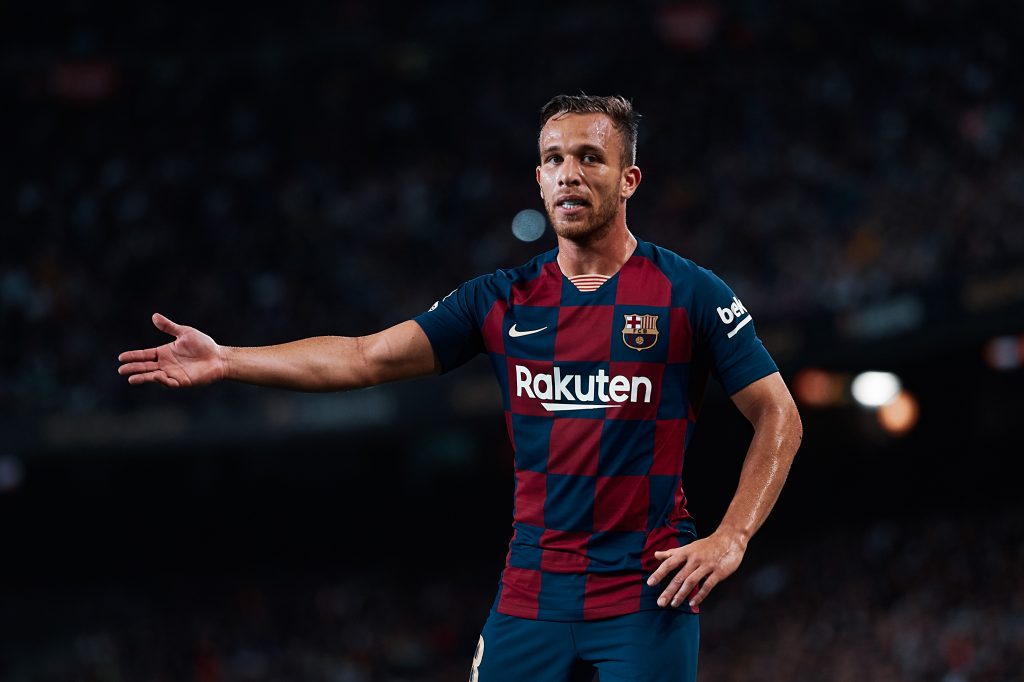 At long last, Barça have made official the sale of Arthur Melo and the purchase of Juventus’ Miralem Pjanić. Why did the club complete such deal, and why are so many fans against it?

After weeks and weeks of rumours, the news are now official. Arthur Melo will be heading to Juventus by the end of the current season, as the Italians will pay 72 million euros plus 10 in variables for him. Meanwhile, Barcelona sign Miralem Pjanić for €60 million and 5 in add-ons. Similar to a swap deal between the reigning champions of Italy and Spain, which basically involves Juve paying Pjanić plus 17 million euros if the variables are fulfilled for Barça’s Arthur.

Another complex operation from Barcelona that has raised many eyebrows, and that has many culés unhappy. But, trying to provide a perspective from both sides, what are the positives and negatives from this move for the Catalans?

What do Barcelona win?

The most obvious, and possibly the only purely objective, argument. While it apparently looks like Barcelona are only making around 17 million euros from this transfer, the numbers and finances behind such operation show that the economic benefits can be much greater for both clubs involved. This is thanks to the player amortisation. With Arthur’s sale, the money generated from it is instantly booked in the accounts of the selling club. By contrast, when a signing like Miralem Pjanić’s is completed, the price paid is spread over the years of such a player’s contract.

Adding the time spent from each player at their previous clubs, and the fees of such deals, the accountable benefit for Barcelona from such move is of over €60 million – as explained in detail in this article. For Juventus, their profit is of more than €57 million as well. Big sums of money that help both Barça and Juve in balancing the accounts, which is particularly needed with the current financial crisis that the football world is suffering.

For long, Barcelona has suffered from the lack of spark of creativity from midfield. Since Andrés Iniesta departed in 2018, all the responsibility of generating goalscoring opportunities from outside the box has fallen to Lionel Messi. Ideally, a midfielder should take such weight from the Argentinian’s shoulders, but Messi has had to assume the tasks of creating and finishing the chances almost on his own.

Miralem Pjanić could help in balancing the responsibilities a bit. The Bosnian has been acting as a deep-lying playmaker or regista under Maurizio Sarri this season, but his best performances over his career have come when he has been awarded more freedom higher up the pitch.

While Arthur Melo was often accused of dropping excessively deep and not taking sufficient risks on the ball, Pjanić has a knack for splitting lines and playmaking through his pinpoint distribution and vision. He is adept at playing short intricate passes too, but could be differential for Barça if he was a more advanced distributor rather than a pure organiser. If Sergio Busquets and Frenkie de Jong are in charge of progressing the ball from the first stage of build-up, Pjanić could be given the license to create, assist and invent closer to the edge of the box.

Admittedly, the heavy price tag of 70 million euros and the proven quality and status of Miralem Pjanić could lead to Quique Setién – or any other Barcelona coach – using the 30-year-old very consistently. Pjanić is signed to be a starter. On the flipside, though, his age will not allow him to remain at Barcelona for excessively long. Arthur Melo should have been a starter for the blaugranas for many years to come, but Miralem could remain at Catalonia for a maximum of three or four years.

By that time, the Barça midfield gems should undoubtedly be ready to step up as starters. There’s a lot of hope placed in La Masía prospect Riqui Puig, as well as the likes of Carles Aleñá, Álex Collado, Monchu Rodríguez and more. Riqui, in particular, has proved whenever given the chance that he is prepared to get many minutes in the first team. For some next year still is a bit too early for him to be a regular starter at Barcelona, but, in any case, he should have a much greater importance than until now.

Ideally, Setién should make his team selections based on merit rather than on experience or pedigree. Yet, whether or not such is the case, that a young midfielder like Arthur departs gives these La Masía products greater chances of being in the starting XI regularly one day.

What do Barcelona lose?

1. A gem tailormade for the team’s style

Even if he had not enjoyed complete continuity for various reasons, Arthur Melo had all the tools to succeed at Barça. He seemed like a midfielder raised in La Masía, which was already admirable considering he had arrived from Brazil and had never played in Europe before. Outstanding ball-retention skills, exceptional press-resistance, excellent passing reliability…Technically, he had all the conditions and features to make history at the Camp Nou.

Now it should have been Barcelona’s turn to shape these qualities, especially regarding the tactical side of the game. Constantly compared to Barça legend Xavi Hernández since the first day he wore the red and blue colours of the club, it is unquestionable that Arthur at least has a unique essence and flair that makes him special. It is not easy to find players with the personality and gift to ask for the ball and protect it even while pressed. But Melo certainly has it.

2. Youth when a rejuvenation is desperately needed

Barcelona has a big problem in the structure and composition of its squad. The core of the team is predominantly old, often with six, seven or eight players in the starting line-up being over the age of thirty. While this can bring maturity and experience, it has been more than demonstrated that what the Catalans need the most is a breath of fresh air. Only by judging the impact of youngsters Riqui Puig and Ansu Fati in recent weeks it can be proved how much do the blaugranas need something different, younger and bolder.

Barça should have patience to develop its rough diamonds. Arthur by no means is a finished product, but this could actually have been a positive thing. The club needs footballers with margin for improvement, who can take the team to new heights as they evolve too. Changing a rising 23-year-old for a declining 30-year-old who comes from having one of his worst seasons at Juventus unquestionably goes against Barcelona’s current needs.

There’s something that cannot be justified through objective reasoning. Because the footballers are not tradeable currency, even if they are often treated as such. As Iván Rakitić said amid rumours over an exit, “I am not a sack of potatoes”. Players have emotions, and so do fans. Football is not only 22 men and a ball, but an accumulation of feelings such as joy, disappointment, frustration, excitement, or hope.

After years and years of searching for the heir to the midfield legacy of the legendary Xavi Hernández and Andrés Iniesta, culés seemed to have finally found their dominant starter at the centre of the park for the following decade. Arthur Melo had brought a lot of home to the Barcelona fanbase. His love for the club or his willingness to succeed there just made him even more loved by supporters. His departure, though, is a hard blow for the fans, and even for the player.

The argumentation behind the sale of Arthur Melo and further purchase of Miralem Pjanić goes deeper than just three arguments in favour and three against. For example, Pjanić also provides a greater versatility than the Brazilian, as he could be deployed in a more attacking midfield role alongside Sergio Busquets and Frenkie de Jong, as the substitute to Busquets in the defensive midfield position, or as De Jong’s back-up dropping deeper and being more involved in the build-up. Furthermore, he’s a more mature and well-rounded player right now, on whom the coach can rely in terms of fitness and continuity after having missed only 19 games in his entire career.

“Arthur is neither the first nor the last to sign for a club with high expectations that do not bear fruit. Maybe he lacked a bit of continuity. It is not easy to change things other coaches told him were good, like holding the ball. We want to play at two touches”

Besides, Arthur Melo still is in a development stage of his career. He still has to learn when to release the ball, when to carry it, when to pass it…He can be a bit too invasive in his occupation of spaces, which still doesn’t make him ideal for the positional play. His ball retention and possession is exquisite, but it is his intentionality and positioning what has most room for improvement. That said, while Pjanić is 30 years old and already past his prime, Arthur is yet to reach it as he is only 23. All he needed was the right coach and environment to teach him how to make an impact between the lines, have a greater influence in the final third and accelerate the ball circulation speed.

At last, while for many the talent and age of Arthur clearly outweigh all the other arguments, there is not turning back. All there is left to do now is to hope that both players make a final positive contribution in their respective teams for the remainder of the season, before they switch sides and prove their value at their new home.

For Arthur, let him and Barça end the campaign on a high note, and thank him for two short but promising years, as well as to wish him luck in his new adventure. For Pjanić, may he end his four-year spell in Turin in a satisfactory manner, before exhibiting all his quality at the Camp Nou, in spite of all the pessimism following the loss of a younger talent. And, for Barcelona, it is time to focus on the remaining challenges for the current course, which is still far from decided. Starting from tomorrow, where the azulgranas will have to leave all the noise aside to focus on the critical home clash with Atlético de Madrid.