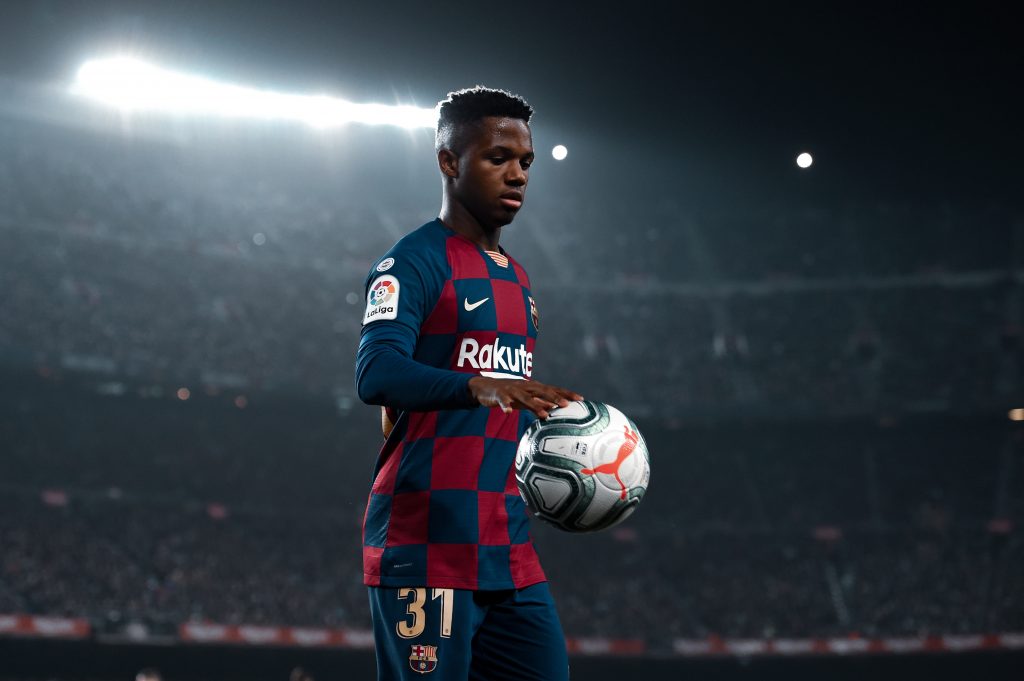 Ansu Fati has several offers, including one from Borussia Dortmund, but his trajectory at his dream club Barcelona has just started.

The rumours declaring that every Barça player except Messi and Ter Stegen is up for sale may be close to reality, but thankfully not the reality. Fortunately, one of the talents that won’t be leaving regardless of the interest from many European clubs is Ansu Fati. Having had a completely unexpected debut season by making his first senior appearances at the age of 16 and then having a significant role at Barcelona due to the injuries upfront, Ansu’s career at the Camp Nou has just begun. And it won’t end anytime soon.

Certainly it shouldn’t. It would be beyond belief to let go a 17-year-old who is expected to be one of the figures of the culés‘ future project in order to raise funds for other signings. Not even a loan seems suitable at present, as he’s just a teenager that Barça must look to protect at home. The best way to keep his development under control is to keep him at the club, and give him progressive minutes and a growing importance as he gains experience. For once, the ideal plan for Ansu apparently is the one the board has chosen for him: let him train and play with the first team, and feature in some games with Barça B in case he needs playing time.

That said, it is not surprising to see that he has attracted attention from many giants around the continent. His breakthrough campaign has not gone unnoticed. In particular, today Sport have reported that Borussia Dortmund wish to fill in the likely departure of Jadon Sancho with Fati. The Germans are known for developing youngsters, such as Erling-Braut Håland, Ousmane Dembélé, Christian Pulisic and Sancho himself, who joined them from Man City at the age of 17. The same age as Ansu’s. While too young for most of the top clubs, BVB have never been afraid of giving their teenagers valuable minutes in the big competitions.

❛ Ansu Fati has surprised me the most at Barcelona this season, because I didn’t know him when I came here. He is still very young and when he started to train with us, you could directly see that he is really talented and has a lot of quality ❜

Now, Die Borussen have identified Ansu Fati as the right man to replace Jadon, whose exit from the Bundesliga is highly probable. Nonetheless, per Sport, Barcelona would only consider a loan or a sell with a buy-back option. Still, the other Catalan newspaper Mundo Deportivo has expressed that there are “zero options” that Ansu Fati leaves, no matter the offer. The azulgranas don’t want to lose control over his development and tactical, technical and physical evolution. “We count on Ansu to stay with us”, sources have told Mundo Deportivo.

With the links with Neymar and Lautaro Martínez, and the arrival of Trincão, one would think that the La Masía product could be getting no minutes next term. But Barcelona are not forgetting Fati, who will have the regularity he needs either in the first team or at the B when required. He and his body are still growing, which is a reason why he has had some physical discomfort at some point throughout the season. Therefore, he will continue to be closely monitored by the club’s staff and professionals. Ansu wants to stay at Barça, and Barça wants Ansu to stay. Case closed.