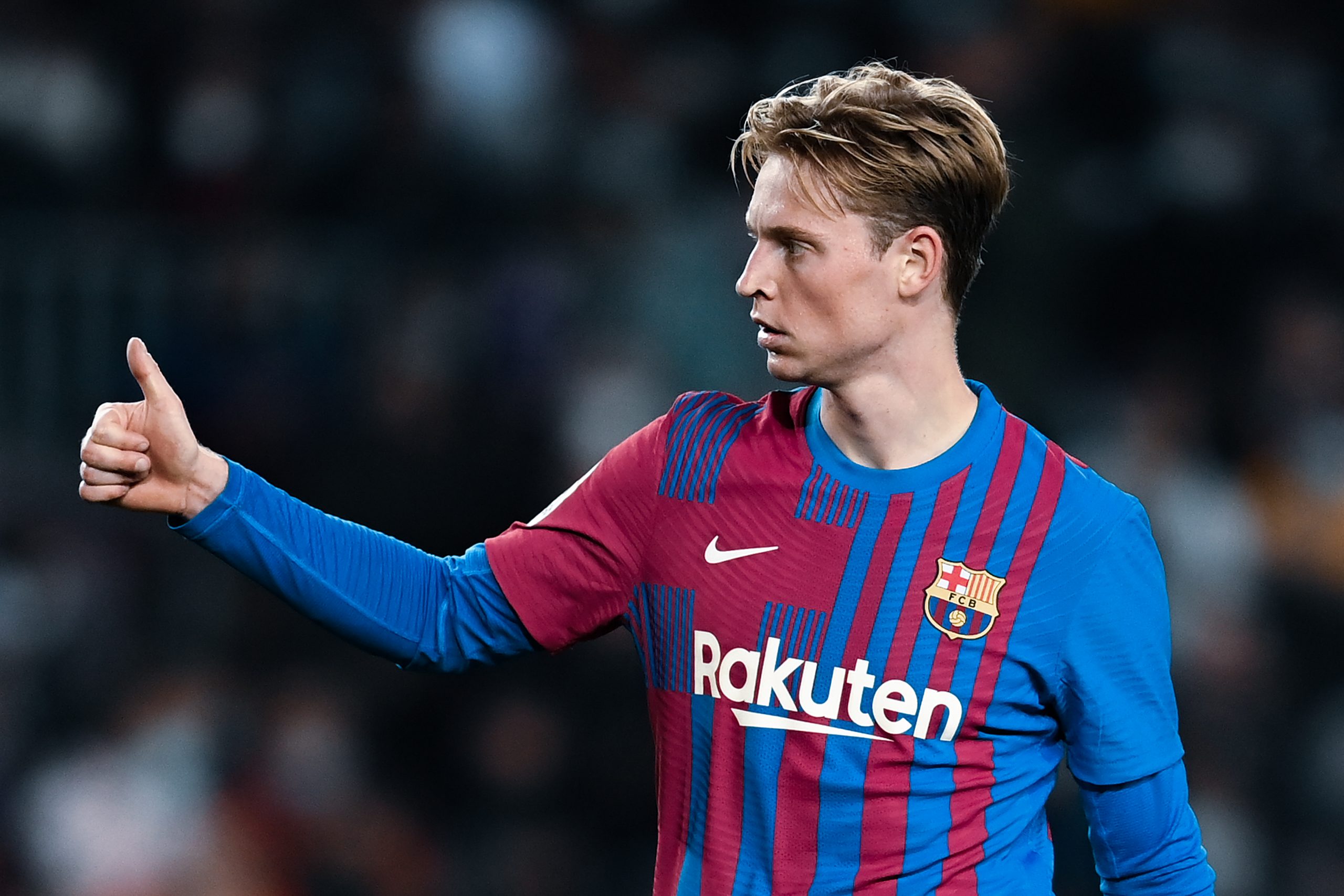 In Barcelona’s first match of the new year vs RCB Mallorca, Frenkie de Jong slotted into the notorious pivot role. While Barça walked away with a crucial three points, de Jong did not do anything apparently awful on the surface, it was yet another example of how difficult it is to extract the most value from the Dutch midfielder.

To preface, it is absolutely true that this was not a typical match. Injuries, COVID, and suspension pushed him to the pivot in the first place and also meant he was playing within a significantly rotated squad.

As such, this particular context can pardon his overall effectiveness to some extent. On a micro-level, though, there were details in his performance that can not be ignored.

Out of possession, the job of a single pivot is incredibly complex and vital. For the sake of simplicity, let us say we can split these responsibilities into two categories: duelling and disrupting.

Duelling entails more of the dirty work – closing down the ball carrier, putting in challenges, etc. This tends to be more of what people first think of when they hear the word defending. De Jong, simply put, is not very skilled at this.

For instance, during a defensive transition against Mallorca, where the opposition attacker brought down the ball in the centre of the attacking third, de Jong was sitting alone in front of Barça’s backline. It was his job to shut down a play like this.

However, the Dutchman did not actually engage with the dribbler whatsoever. By staying back, he essentially gave the opponent a path at Barça’s centre backs. It was Riqui Puig, coming from behind, who had to foul the dribbler – still giving away a free kick in a dangerous area.

This is not just a one-off occurrence, either. Data shows us that someone like Sergio Busquets clearly engages with opponents with far more regularly and successfully than the Dutch international.

Then, when it came to disrupting, de Jong’s performance against Mallorca was arguably more concerning. Disrupting involves more intelligence and reading of the game to shut off the opposition’s ball progression.

In the move shown below, Mallorca had recycled possession back to their defenders. Naturally, Barça stepped up. De Jong, though, went too far.

Mallorca played a simple ball from centre back to winger, followed by a short pass inside. After this, they had numbers forward against an incredibly exposed defence. Meanwhile, Barça’s #21 is caught lacking.

Keep in mind this was not a lightning-quick counterattack from Mallorca. This came from an established Mallorca possession in which the former Ajax man simply left his crucial area in front of the backline.

No, a 33-year-old Busquets is not entirely exempt from these kinds of errors. The Spaniard does make them at a much lower rate than de Jong, though, and also gives you a much higher volume of ball-winning.

Compared to the world’s elite pivots, he simply does not have the defensive chops in terms of volume or efficiency to hold down that role in front of the backline himself.

Even if you tried to consider development, things look bleak. De Jong has never even shown defensive capabilities compared to fellow non-pivots that would flag him as someone potentially capable of a shift into a lone deeper position. This is reflected on the pitch whenever he is forced into the role.

What about in possession?

Some may still counter that the attacking benefits of letting de Jong sit deep are most important. You could keep his skill set in the side while filling the interior role with another skilled player going forward.

But what if this actually negates his effectiveness in possession? And what if you actually cannot get the ball to those players ahead of him as frequently?

It is clear to everyone that the Dutchman is an elite ball carrier – one of the best in the world. For context, he is in the 94th percentile of midfielders for progressive carries per 90 minutes in the last calendar year, as well as the 88th percentile for successful dribbles.

His ability to drive through the lines from deep can be invaluable for a possession-dominant side like Barça. Essentially, they can “manufacture” transition-esque situations with numerical superiority and the opposition defence in disarray.

As a single pivot, though, de Jong can not really utilize this ability. Driving upfield with the ball is quite literally leaving his area empty. Once the ball is lost, the backline has no protection, and the side are wide open in transition.

One of the penetrative carries de Jong did make against Mallorca is an excellent example of this. The Dutch midfielder picked up the ball deep, was able to turn due to a lack of pressure, and then drove through Mallorca’s initial lines of defence.

When travelling forward at top speed like this, he will come in line with the other midfielders or even go beyond them. This leads to that exposed backline in transition that will have top opponents licking their lips.

In addition, this carry does not really create that dangerous of a situation. After de Jong releases possession, there are still seven defenders behind the ball and more on their way. Considering the risks involved, there are definitely better methods for the side to progress the ball into the attacking half.

On top of the carrying limitations, the Dutchman’s passing style does not match that of a single pivot. He does not have the tendency to consistently spray passes and pick out teammates in all directions to spread the pitch.

With this combination, you get the kind of performance de Jong had against Mallorca. In that match, the 24-year-old had only two progressive passes and two progressive carries. That was it from 88 total touches (oh, and he had zero successful dribbles).

Those four progressive actions were his second-lowest tally in a La Liga match this season. It would also tie Busquets’ lowest of four against Villarreal, and in that match, the Spaniard was limited to only 52 touches.

This is not to say de Jong is a poor passer. Even against Mallorca, he showed great ability to combine first-time and weigh his short-to-medium range passes to perfection. It is just that his type of distribution is not ideal for being a single pivot, and then when you take away his ability to carry, you are left with maybe a slightly above average player as opposed to a world-class one.

What does this all mean?

The Mallorca match provided the latest evidence that de Jong is not going to be a single pivot. While, in theory, it seems that putting the 24-year-old in that role would make the side more dangerous, it ends up negating his greatest asset and exposing his weaknesses.

You might be thinking that his fit as an interior has also seemed unideal. This is also true, although not to the same extent as the pivot role. In something like a Pedri-Busquets-de Jong midfield, the Dutch international has to drop much deeper to pick up the ball and employ his penetrative carrying.

This brings another defender towards Barça’s deep buildup and leaves the interior zone in the right half-space empty.

Where de Jong would most likely thrive is as a half of the double pivot. This would allow him to pick up the ball deep without disrupting his side’s shape. On top of that, he could drive forward knowing that he has a more reserved presence covering behind him and that he does not need to have primary ball-winning responsibility.

It is clear that even in suboptimal roles, de Jong has the ability to break open games. However, can Barça truly maximize his value? It will be interesting to see what Xavi has in mind for him, especially as Busquets continues to age.

Getting the most out of the Frenkie de Jong is a tricky puzzle to solve, but knowing the player he is, it is well worth it for any team that succeeds.