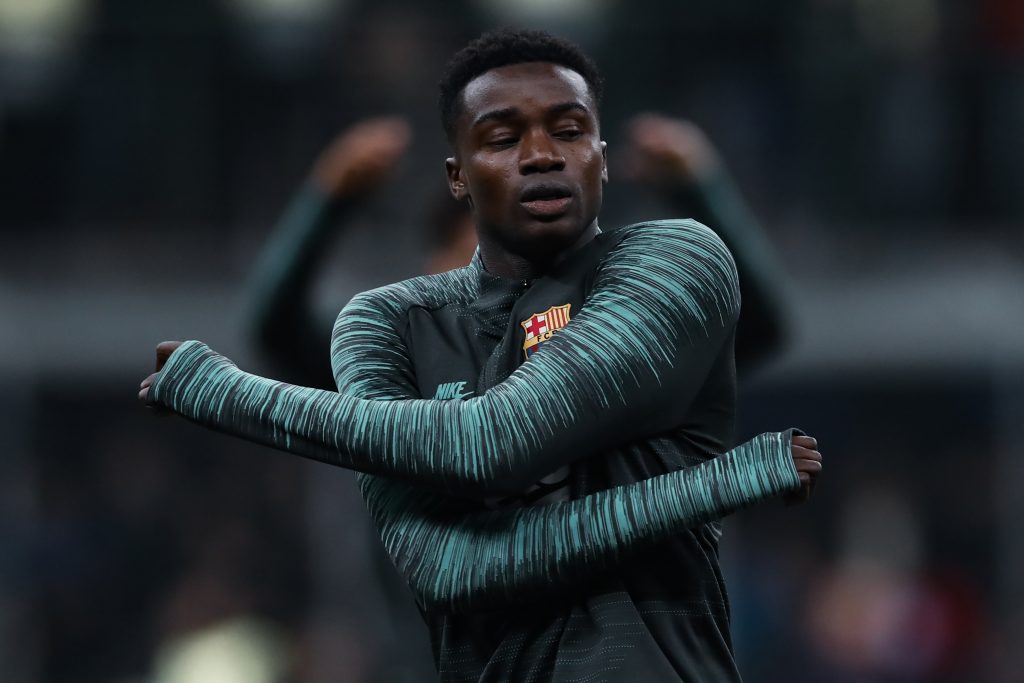 OGC Nice announced on Monday that they won’t be buying Moussa Wagué after his short loan, and his season comes to an end after just 8 matches and 377 minutes enjoyed.

At 21 years of age, what a footballer needs is to play. But this is the complete opposite to what has happened to Moussa Wagué. The Senegalese right-back was promoted to the Barcelona first team last summer, after three good La Liga games by the end of the previous season. At Barça B, under Pimienta, his adaptation coming from Belgium’s KAS Eupen had been satisfactory, and the board considered he was ready to make the step up. Indeed, Wagué has always shown maturity and a fairly complete skillset, in spite of certain limitations and not excelling in any particular facet.

In the summer of 2019 some optimistic fans, myself included, even predicted Moussa to battle with Semedo for a starting spot in Valverde’s side, due to the announced move of Sergi Roberto to midfield. But nothing could be further from the truth. In total, the youngster has only featured in 8 matches, with two different teams, this campaign. A campaign that has already finalised for him. 377 minutes played, with only 4 times playing the entire 90 minutes, and 4 more fixtures in which he got just cameo appearances off the bench. Let us hope that, at least, this has allowed Wagué to improve certain aspects, but the reality is that this has almost been a year lost for him. Three big factors have influenced this unfavourable outcome: Sergi Roberto’s switch back to right-back, the loan to Nice, and the unfortunate coronavirus outbreak.

During the 2019/20 preseason, Ernesto Valverde expressed his intention to move Sergi Roberto to his natural position, midfield. “Our idea is to use Sergi Roberto in midfield this season”, El Txingurri declared. While the midfield seemed overcrowded, Valverde’s tactics and plans had changed a bit for this new term: a desire to get closer to a more positional football, the aim to use more advanced midfielders, and Rakitić’s decreasing minutes. This was translated to the pitch when, in the final preseason friendly against Napoli and the opening La Liga clash at San Mamés, the midfield trio was formed by De Jong as the pivot, and Aleñá and Sergi Roberto as the interiors.

❛ I will play wherever Valverde says. What I want is to help the team ❜

Nonetheless, the poor initial results, despite an improvement in the style implemented, as well as Semedo’s fitness problems, saw Ernesto use Sergi as the main option to replace the Portuguese. Even with Nélson back, Valverde was again more convinced by Roberto’s performances. “The seasons start with you having one idea and the players start following that plan. But later, you have to make adjustments”, the manager said.

This step back in his original beliefs had some collateral damages, though. In particular, Wagué, who had been promoted to compete as Semedo’s back-up, now saw how he was relegated to being the third-choice right-back. When Semedo was injured, Sergi would play. When Sergi was injured, Semedo would play. There was little playtime left for him. Only when both were unavailable, which only happened against Leganés, did the African start. Apart from that, he only got one minute in a home game against Dortmund, and 90 minutes in the duel with Inter at San Siro once Barça were already qualified as table-toppers of their Champions League group.

An uninspiring loan to Nice

That said, Wagué had played the full 90 minutes in the last two fixtures. He even delivered a surprisingly crucial assist against Monaco. The game was tied at 1–1 when, in the 93rd minute, the Senegalese delivered a low cross for Kasper Dolberg’s backheel goal. A 2–1 victory that saw Nice climb to the fifth position in the table. With the confirmation that the Ligue 1 will not resume after the coronavirus outbreak, Nice’s current fifth position will remain as it is. Therefore, Wagué’s assist will allow the Eaglets play in the Europa League next term, although the right-back won’t be with them anymore.

An early end of the season

When it looked like Wagué was finally establishing himself as Vieira’s starter, the coronavirus stopped everything. As the Ligue 1 season came to an end, Nice declared on Monday that they will not activate the €10 million purchase option they had on Moussa. The Barcelona loanee had neither disappointed nor stood out, and the French club have considered that it was not worth paying it.

This means that Wagué is free to return to Catalonia at present, but he won’t be able to play for the blaugranas in the remainder of the season since he was registered as a Nice player. For next course the board is already looking for an exit for the 21-year-old. Quique Setién does not seem to count on him, with the club being more interested in more established names like Cancelo. Barça will try to either sell Moussa, who was bought in 2018 for €5 million, or loan him out. What’s undeniable is that in the next campaign he should play many more minutes than the 377 of the current one.