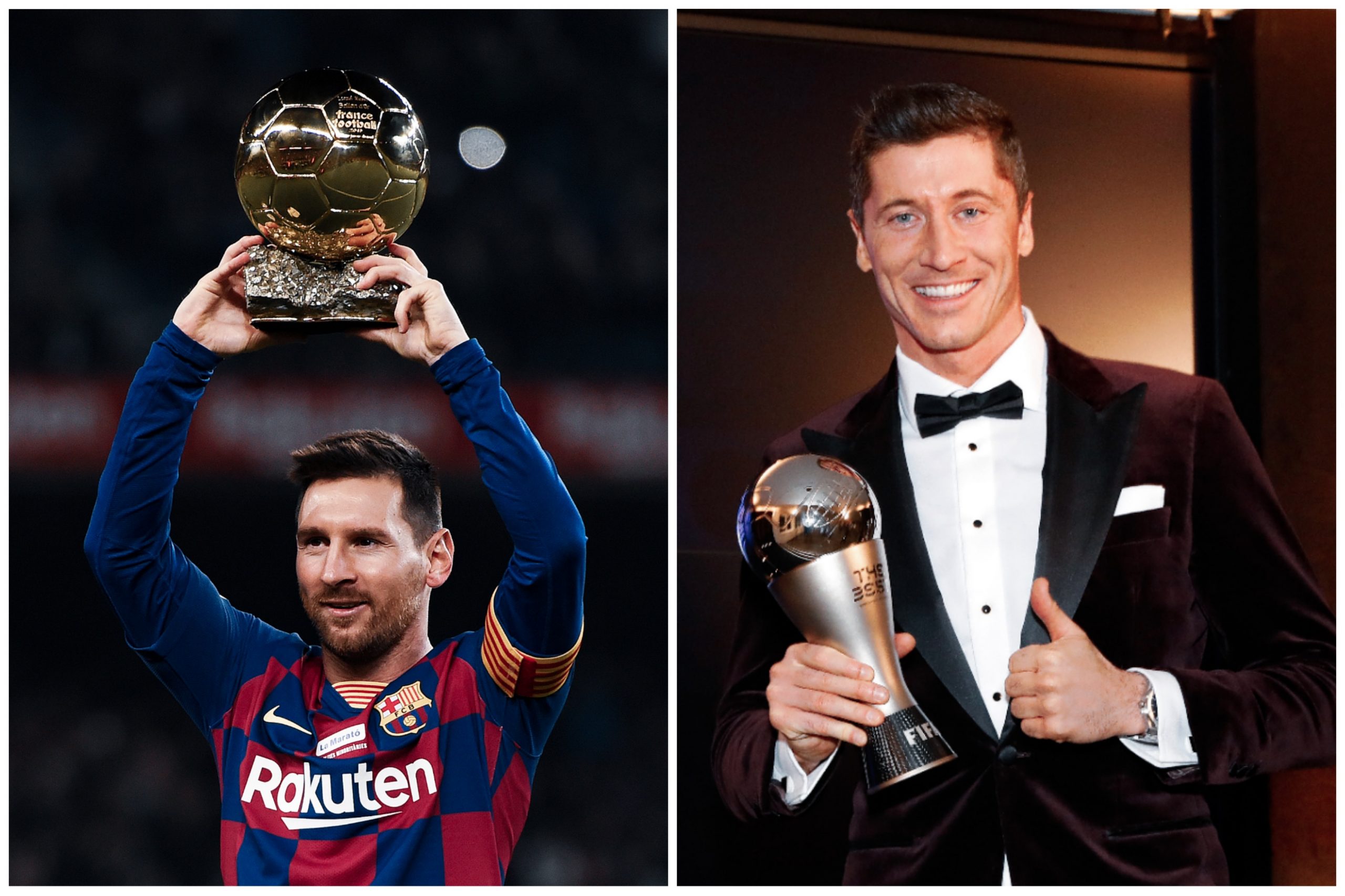 As the end of the year edges closer, football fans turn their heads towards the prestigious Ballon d’Or. While the trophy has lost a lot of its credibility, it still serves as the most important award individually.

As the years go by, fans will look at the winners to seek quick knowledge about the greatest players of each generation, which is why it still holds a lot of weight.

On 8th October, France Football announced the top 30 nominees for the Ballon d’Or 2021, with the winner set to be announced on 29th November.

That said, Barça Universal writers pick their top 3 for the award from the 30 candidates announced by France Football.

It’s tough not to be biased here, but it is tougher to look past Lionel Messi’s incredible year. The Argentine kick-started Barcelona’s league title challenge with the turn of the year and was the best player en-route their only trophy – the Copa del Rey.

Not to mention, he is the only player who rivals Robert Lewandowski’s bizarre numbers, but all while playing in a much worse team. Add the Copa America win, along with the several individual accolades he picked up in the tournament, Messi takes the prime spot with ease. LM7, well and truly on its way.

One could not help but feel sorry for Robert Lewandowski after the Ballon d’Or was cancelled last year. He was pretty much unrivalled, with all other favourites suffering a significant dip in their form.

However, this year, he will be going head-to-head with Lionel Messi. With the Golden Boot and the Bundesliga in his pocket, the Pole makes a compelling case to be the front-runner of the award. And to be frank, nobody can put it past him to score some more goals till November to seal it.

That said, he falls short of Messi here, who dominated all aspects of the game all year.

The truly tricky pick in the top 3, I put Karim Benzema ahead of everyone else as the second runners up for this award. The Frenchman had a fantastic start to the year and was single-handedly managing Real Madrid’s attack.

All of his brilliant efforts were awarded a call-up to the French National Team for the European Championship, where he scored four goals in four games.

His start of the 2021/22 season cannot be overlooked either, with a bizarre nine goals and seven assists in eight games in the league — more than anyone across the top five leagues.

A bit boring to put three forwards on the podium, but frankly, no other player among the top 30 in any other position really came close to these three for me.

Despite being an avid admirer of Lionel Messi, it would be unjust for Robert Lewandowski not to have his day in the sun. He has had a record-breaking year for Bayern Munich, and if not for his heroics, then the Bavarian outfit would have had a considerably more troublesome year in Germany.

The Pole’s 41 goals in the Bundesliga were worthy of a European Golden boot, as well as a new German record for goals in a single season, held by Gerd Muller from 40 years ago. This is without mentioning the fact that from a purely goalscoring point of view, not a single individual has come close to him.

Certainly, this deserves the Ballon d’Or, or at worst, a top 2 finish.

Lionel Messi’s start to the season was far from ideal, with barely any goals in the first ten games of the campaign. Once things picked up, they did pretty well, and he ended up having quite the season for Barcelona for whatever part of it remained.

A finish of 38 goals and 14 assists in all competitions is below his usual best, but remarkable nonetheless. In his final La Liga season, he ended with one last Pichichi. Internationally he ended his long wait for an international title, running the show almost entirely alone as he bagged the Copa America for Argentina.

Jorgino’s presence is here by default. He was not the best player in the Premier League or even Chelsea, let alone the world.

That said, he individually had a phenomenal year, probably his best ever, but if not for his (I think undeserved) UEFA POTY award, then he shouldn’t be considered at all. His best individual year, indeed, but never is this a Ballon d’Or worthy year.

Lionel Andres Messi has had yet another sensational year, proving his time atop the footballing world is far from over. He has tallied 37 goals and 14 assists across appearances with Barcelona, Argentina, and Paris Saint-Germain.

With Barcelona, he lifted the team to the Copa del Rey, won the Pichichi Award for a record eighth time, and carried a substandard squad beyond measure. The cherry on top, of course, was his Copa América win with Argentina.

He finished the tournament with four goals and five assists, earning the Golden Boot and award for Best Player. Along the way, Messi contributed to nine of La Albiceleste’s 12 goals, including two free-kicks.

Things have gotten off to a slow start at Paris, but if his goal against Manchester City indicates anything, things will start clicking soon. If all is fair and just, the six-time Ballon d’Or winner should surely win his seventh.

Robert Lewandowski has cemented his legacy as one of the greatest forwards of all time, and perhaps 2020 was his career-defining year. Still, he has remained ever-dominant in 2021, scoring a combined 50 goals for Bayern Munich and Poland and winning a host of trophies along the way, such as the Bundesliga, DFL-Supercup, and Club World Cup.

With the latter, he won the Sextuple. In May 2021, he earned his first European Golden Shoe, finishing the 2020-21 campaign with 48 goals in all competitions.

Bayern’s number 9 has also broken records left and right, notably besting Gerd Muller’s elusive record of 40 goals in a Bundesliga campaign with 41, and Muller’s other record (15) of most consecutive appearances in all competitions with a goal (16).

In any other year, the Ballon d’Or would undoubtedly be his, but second place is not too shabby.

With Messi and Lewandowski as clear joint-favourites, picking a player at third was difficult. Jorginho has earned plenty of plaudits, however, a sheer amount of trophies is not enough to overpower individual performances.

As such, Karim Benzema has earned the third spot on my list. The Frenchman has 47 goal contributions in 47 matches in 2021 and has spearheaded Real Madrid. He has also gotten off to a blistering start in 2021-22, tallying ten goals and seven assists thus far.

Internationally, he made his first appearance with France after five years and excelled at Euro 2020, scoring four times in four appearances.

For his brilliance in 2021, Benzema deserves the third spot on this list.

Was there ever any doubt? Lionel Messi’s Copa America victory was the cherry on top as he finished off an excellent season with Barcelona.

The only reason Messi’s front-runner status could have been in doubt would be the ridiculous standards he has set over the years leading many to believe he isn’t the best in the world. Granted, there are seasons in which the little genius has played better, but his year, individually, has still been incredible.

Compared to midfielders or attackers across the top 5 leagues, Leo Messi is above the 90th percentile in almost all statistics, which is unbelievable. Further, when you watch him play, it is clear he is still the best in the world at what he does. The stats back it up wholeheartedly as well.

First in La Liga last season for goals, assists, xG, xA, shots on target per 90, key passes, passes into the penalty area, Shot-Creating Actions per 90, the list goes on. Arguably the most complete player in the world and among the best playmakers, Lionel Messi’s domination in football is unquestionable.

The top two this year are essentially set already. Robert Lewandowski is one of them, and he gives a six-time Ballon D’Or winner and one of the best players ever, if not the best, a run for his money.

41 goals and seven assists in 27.3 90s for Bayern Munich in the 2020-21 Bundesliga season was astounding by itself, but the Polish striker has hit the ground running in the 2021-22 season as well with seven goals and one assist in just 6.4 90s.

Jorginho’s year was awe-inspiring as he won the Champions League and Super Cup with Chelsea and the Euro with Italy, being key to both victories. He was later awarded the UEFA Player of the Year based on the same things.

Being the protagonist in propelling both Chelsea and Italy’s attacking play is a massive responsibility, but one that he excelled in. Had this award been for the most decorated player, Jorginho could have edged out Robert Lewandowski and Lionel Messi for the number one spot.

But, since we are talking about the award for the best player, Jorginho can rank third at best. In fact, a strong claim can be made for Kevin De Bruyne and Karim Benzema to occupy this spot as well.

The current holder of the prestigious award seems set to add another Ballon d’Or to his collection after a sensational season with club and country. Messi is the only player in the history of football to have six Ballon d’Or to his name, and the fact that he is going on to win another one is just a reminder of how far ahead of the football world the Argentine is.

There are very few, if any, arguments against the former Ballin d’Or winner lifting the award again. He has recorded 37 goals and 14 assists in 2021. Moreover, his club season ended with a Copa del Rey win before he inspired his National team to the Copa America title. In the process, he was also named the best player and top goalscorer of the tournament.

Robert Lewandowski has had arguably his two best football years over the past two seasons. Despite being the favourite to win the coveted trophy last year, did not win it owing to the award being cancelled.

Once again, the Polish international delivered an astonishing season with a whopping 50 goals and eight assists in 2021. Though he couldn’t win on the International front, he was an integral part of Bayern Munich’s domestic successes. He should be awarded a podium finish at the very least.

Winning both the Euros and the UEFA Champions League in the same season is a dream very few players get to experience in their careers. Jorginho may not be the most flashy of players, but the Italian was a key pillar in both Roberto Mancini’s Italian and Thomas Tuchel’s Chelsea midfield.

Moreover, the midfielder scored five goals and recorded two assists in 2021 en route to a silverware studded season. His inclusion on the podium would not be of pure merit but certainly, show that trophies do have a weightage on the results.