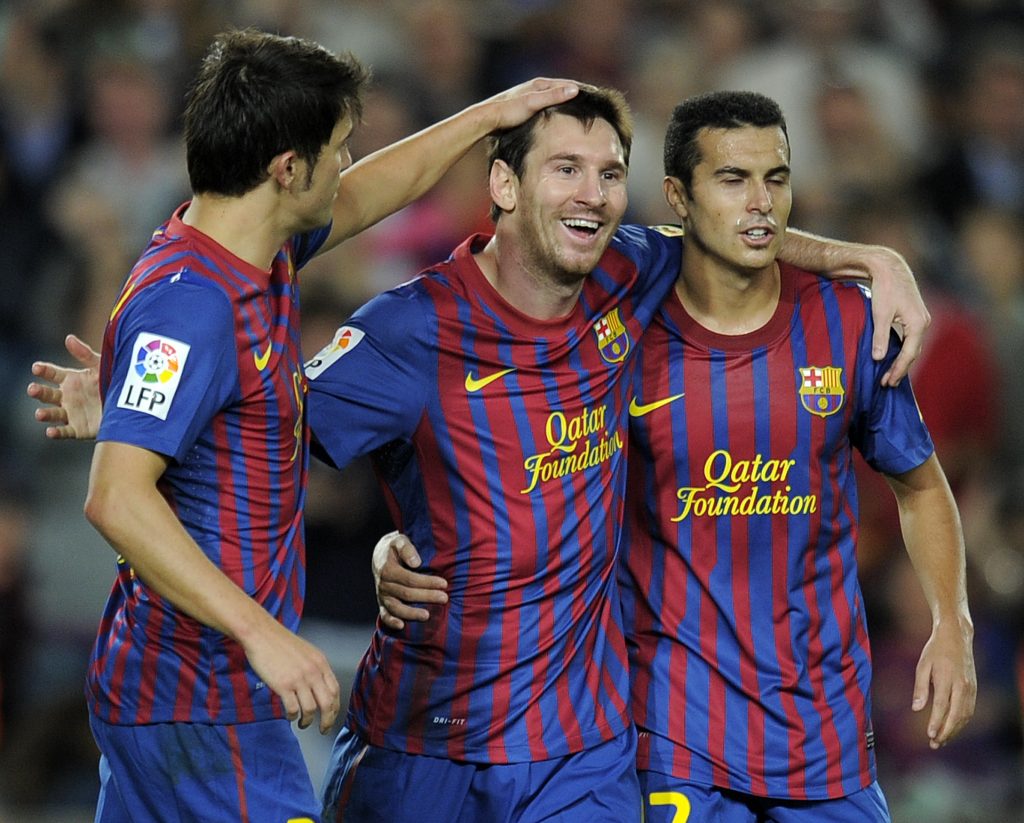 As we stroll through the fond memories of Barcelona’s famed attacking tridents, we take a look at another deadly trio of Leo Messi, David Villa and Pedro Rodríguez in the latest instalment of this mini series.

In the 2010/11 season, David Villa and Pedro were integrated into a formidable attacking trident. Messi, Villa and Pedro, or MVP as they were abbreviated, ended up etching their name into football history. While Messi has been a bonafide starter in all of Barça’s attacking lineups in recent history, his partners deserve a fair share of credit. Villa and Pedro complemented the Argentine superstar really well. Together, the three of them lit up Barcelona’s season.

Of course, Barcelona’s 2009 sextuple winning side remains unmatched in terms of the silverware they won. However, Guardiola’s 2010/11 side were nothing short of spectacular. They ended the season as La Liga champions, Spanish Super Cup winners and Copa del Rey runners up. And who can forget the pinnacle of the season? Barcelona lifting the Champions League trophy after producing one of the finest footballing displays in club football. Barça’s performance at Wembley still stands as a testimony of a club performing at the highest level.

And a cornerstone for this was the individual ability of Messi, Villa and Pedro as well as their fabulous link-ups. Let’s take a deeper look at MVP in all their glory.

There is no doubt Guardiola’s systems are highly nuanced and role-specific. And more so than anything, Pep’s ideologies are demanding. Every player has to be present, aware of his duties and consciously contributing towards meaningfully progressing the ball. Messi naturally, was an undisputed starter, just like he is today. So let us recount his role first and then observe how Villa and Pedro complimented him so well.

Just like now, Leo Messi has always enjoyed an unrestricted amount of freedom in attack. He chose whether to operate out wide on the wings or drop deep. When he drops deep, he can receive the ball, turn and run at the defenders. In doing so, he draws defenders towards him, leaving plenty of spaces in dangerous areas for his teammates to exploit. If he found himself in a tight spot, he could swiftly recycle possession with Xavi and Iniesta.

When Leo dropped in, if there was a defender following him, his quick movements could leave space in behind for his partners Villa and Pedro to attack. Similarly, if a holding midfielder is tasked to mark him, Messi’s darting movements in and out of half spaces opened up channels for quick one-two’s. This renders a man-mark thoroughly ineffective as well. His destructive ability on the ball needs no introduction either. Frankly, there isn’t much to be said about Messi that hasn’t already been said. The maestro was at his breathtaking best and allowed Villa and Pedro to be at their best as well.

David Villa was one of the new signings of the 2010/11 season. He was brought in from Valencia for 40 million euros on a 4-year deal. He joined the blaugranas right before the Spanish squad departed for South Africa, where they would eventually lift the World Cup. Villa, had a stellar campaign for La Roja at the tournament. He racked up 5 goals and an assist after featuring in all 7 games. He also made the tournament’s all-star team and went home with the Silver Boot and Bronze Ball. Not being a La Masía graduate, many predicted that he wouldn’t enjoy much success at Barça. However, he emphatically proved his doubters wrong.

His natural goalscoring prowess and adaptability on the pitch meant he was a great asset to the team. Pep often deployed Villa on the left wing, despite him naturally being a striker. However, his position, like his partners’ was interchangeable. He played as a second striker generally staying wide. But made curved runs runs into the box to finish off attacks. His movement was second to none and he could latch on to through balls very well. And the biggest weapon of course, was his finishing. Although he did go through a rough patch in the latter stages of the season, he was always a threat. After all, he is one of the greatest Spanish strikers of all time.

Pedro Rodríguez, being a La Masía product, was already familiar with the technicalities of Barça’s system. His role was perhaps the most linear out of all the front three. But of course, that doesn’t mean it was easy. It also required tremendous tactical awareness, movement and ability on the ball. Pedro was incredibly mobile. His swift movements made him an absolute nuisance to mark.

He often started games on the right flank. Him, along with David Villa were primarily tasked with staying out wide and overloading the wings. Pedro in particular stayed wide most of the time. This ensured that the opponent’s defense could not stay compact through the middle. This meant the midfield could retain their fluidity. Additionally, the wing overload meant the opposition full-back was pinned. Thus, on the off chance that the midfield was not operating well, dangerous chances came from out wide. Villa and Pedro staying wide also meant that the opposition defence could not push up high when Messi dropped deep.

Pedro had a slow start to the season but midway through, he burst into life. And despite a lengthy injury, he performed at a stellar level.

The legacy of Messi, Villa and Pedro

Messi, Villa and Pedro shared a remarkable dynamic with each other. They could fluidly interchange positions and help each other out in tight spots whenever needed. Whenever Pedro or Villa would be cornered onto the touchline, Messi would often drift out to quickly generate spaces with short passes and quick movements among the three. The numbers were mind-boggling as well. The trio together scored a total of 100 goals. Pedrito and El Guaje scoring 22 and 23 goals each, respectively, and Messi racking up 55. And they shared a total of 36 assists among them.

Messi, Villa and Pedro were superb in the 2010/11 season. And their heroics were capped off by the Champions League final where they each scored one goal. The only sad part perhaps, is that they didn’t play as a trident for much longer. The partnership was short lived, owing partly to Villa’s injuries and Alexis Sánchez’s arrival. Yet, purely in a footballing sense, this will be remembered as one of the most lethal attacking tridents in Barcelona and maybe even football history.

Pedro Rodríguez, the unsung hero of Barcelona
What did you think of this article?