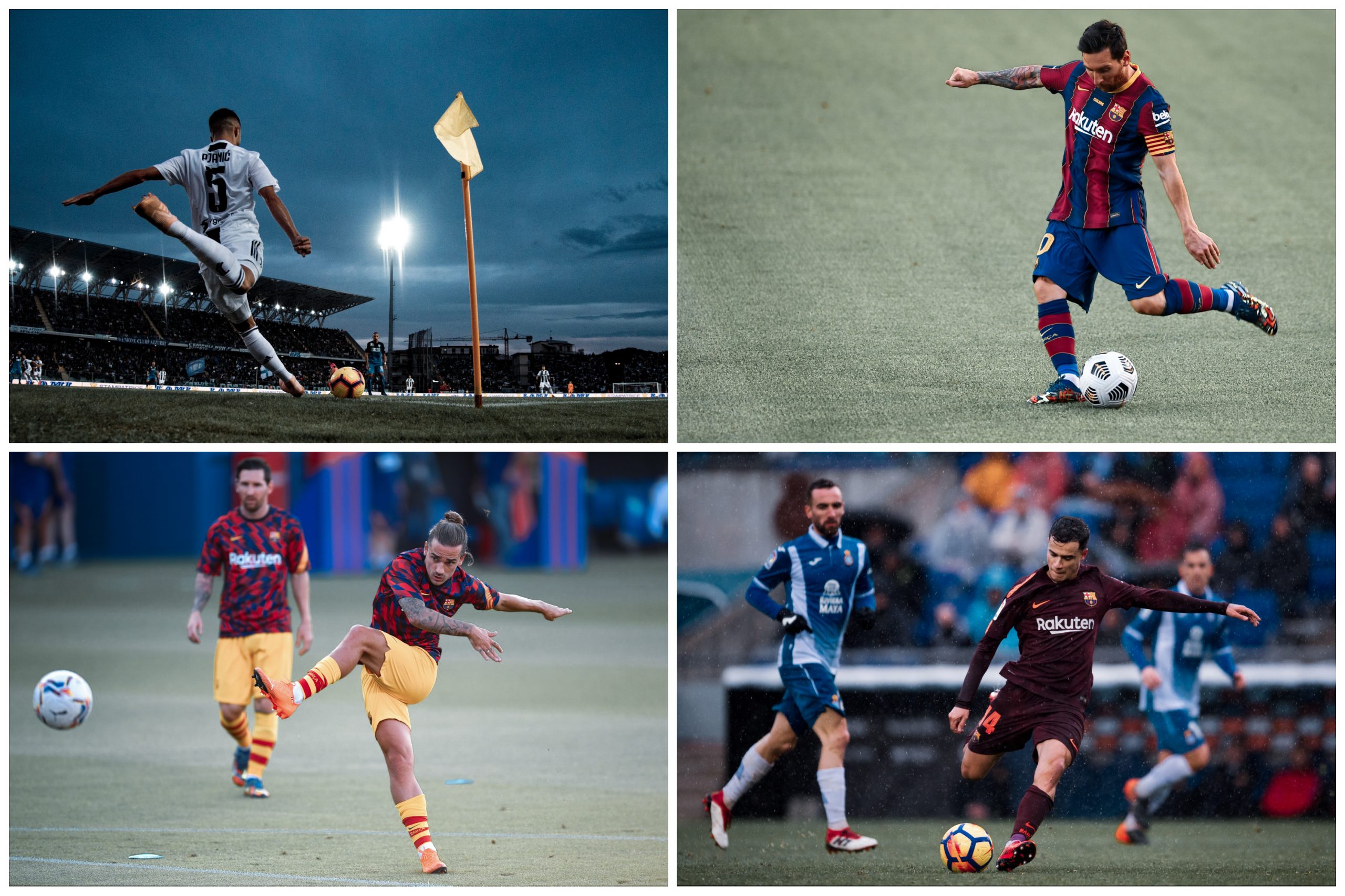 Photos via Imago and Getty

Lionel Messi has established himself as one of the most dangerous free-kick takers of his generation. However, the numbers show that his set-piece prowess is in decline.

Time and time again over the last few seasons, it feels as though a freekick goal from Lionel Messi has arrived to save Barça. Particularly during Ernesto Valverde’s reign, Messi seemingly always pulled off something magical to gloss over a shaky performance or lift the team out of a rough situation.

Whether this was a match-winner against Atlético Madrid, a freekick brace in the derby at Espanyol, a 90th-minute strike at Villarreal, which opened the door for a 93rd minute Luis Suárez equalizer, or an astonishing effort in the Champions League semi-final against Liverpool, Leo always seemed to deliver from these situations.

In the more recent past, though, freekicks have contributed to growing frustration among Barça fans, and the six-time Ballon d’Or winner himself. Whether they carom right off the wall, fly wide of the post, or fall slowly into the hands of the keeper, Messi’s set-piece shots as of late have been largely unsuccessful.

Given that the Barcelona squad includes some additional well-renowned freekick takers, the question arises: Should Messi be responsible for taking all of them?

While these alternatives do not come close to matching Messi’s career pedigree and output, they are still worthy candidates. One of them is Miralem Pjanić, who grew his reputation as one of the world’s best dead-ball specialists in his time in the Serie A.

Next is Antoine Griezmann, who was developing an impressive record before leaving Atlético Madrid. Finally, Philippe Coutinho has some memorable freekick goals in his locker, albeit his inconsistencies otherwise. The Brazilian is also a prestigious shooter from long range in open play.

With those four options in mind, what do the numbers say about who should be taking the side’s dead-ball shots?

On this topic, it is important to remember just how heavily Messi has been relied upon when it comes to dead-ball shooting. This can be quantified using Understat’s shot data for matches in the big five European leagues since the 2014/15 season.

Compared to these other world-class strikers of the ball, Messi’s shot volume stands head and shoulders above the rest. In total, the Argentine has attempted 262 shots from direct freekicks in the timeframe to Pjanić’s 87, Griezmann’s 39, and Coutinho’s 29.

Furthermore, it is clear how Messi’s presence has caused the volume of others to level off and stop growing altogether since joining the club.

Of course, as Messi has taken the most shots by far, one would expect him to score the most goals. This is reflected by the group’s expected goals tallies – how many goals they would be expected to score from those shots based on factors like the distance to the goal and the angle.

Given that all four players are considered at least excellent freekick takers, they would be expected to score more than an average taker. That is where we can bring in each player’s actual goals scored and compare that tally to their xG.

For total freekick goals, the same trend continues. Coming out on top is Messi with 25, followed by Pjanić with 11, then Griezmann with seven, and Coutinho with five.

Well, if one were to glance at all of these graphs, they would still probably wonder why Messi’s duties are even being questioned. He has the most experience, the highest level of production, and has outperformed expectations the most out of the group.

But, that over/underperformance graph, particularly the end, shows that there is at least some reason for debate. For one, the players are much tighter here, and Messi is no longer the standout by a country mile. Instead, all four players have outperformed their xG, with Pjanić coming especially close to La Pulga.

Even more significant is the trend of Messi’s performance. One can see the ridiculous freekick clinic he was putting on from 2017 to 2019. At his peak, the Argentine had a cumulative xG overperformance of 9.35. Now, that is down to 6.81.

There has been continuous decline here from Messi since November of 2019, and it has gotten more dramatic in recent months. Now Pjanić’s total overperformance of 5.62 seems to say that he should be getting some chances, especially given the consistency at which the Bosnian has stayed relatively close to that level since all the way back in 2017.

Basically, that is where the concern over Messi presents itself. The number ten’s conversion of freekicks has been dropping at a fast rate. If this continues for a few months or so, he would find himself below Pjanić for cumulative xG overperformance, with Griezmann and Coutinho not far behind.

With the validity of the concern established, it is time for further investigation of the data. Total shots, goals, and performance relative to xG reflect a player’s experience and pedigree in dead ball situations, but they do not fully answer our question. We have to go beyond just a total volume of actions and look more into efficiency as well as form in a more specific timeframe.

To add to the analysis, a few new metrics will be incorporated into the comparison. The first two are freekick shots on target and shots on target rate. With a dead ball specialist, the benefits can go beyond just scoring goals. The ability to consistently get the ball over or around the wall and on frame opens the door for rebounds and corners.

Next is goal conversion rate. This simply measures the percentage of a player’s freekick shots which result in a goal. Once again, this helps take into account efficiency as opposed to simply volume.

The final new metric is xG over/underperformance per 100 shots. The purpose of this metric is to normalize each player’s total xG over/underperformance by dividing it by the number of shots they have attempted, then multiplying by 100. A tally of 11 here means that, at the player’s current pace, they would outperform their xG by 11 goals over the course of 100 shots attempted.

While these metrics will be used to examine more recent freekick form, it is still interesting to see how the group stacks up over the whole period.

In addition to reigning supreme in the volume metrics, Messi also boasts the second-highest shots on target rate in the group. However, his goal conversion rate and xG over/underperformance per 100 shots are actually the worst.

Meanwhile, in their lower volumes, Griezmann and Coutinho start to show more promise. The Frenchman has the third-highest rate for shots on target (not too far behind Messi), the best conversion rate, and the second-best +/- per 100 shots. Coutinho then impresses with the highest shots on target rate, second-highest goal conversion rate, and highest +/- per 100 shots.

Now, if their sample sizes were to grow bigger, some of those efficiency tallies would be expected to decline. Although they still go to show how dangerous Griezmann and Coutinho were from those freekicks, and that they should be considered serious options as well.

What if we narrowed down the timeframe to get a look at these metrics in the most recent seasons? Here is the group’s freekick performance since the start of the 2018/19 campaign.

Messi’s peak in those Valverde years is evident, as he looks even better here. Like the Argentine, Griezmann ranked either first or second in the group for each metric during this time, showing how deadly the Frenchman was deadly in these dead ball situations.

On the other hand, Pjanić starts to look a bit less hot after his shooting volume dropped upon joining Juventus. Meanwhile, Coutinho had only attempted a handful of freekick shots during this time.

In an attempt to account for these fluctuations in volume – whether that be Messi’s extremely high number of attempts or Coutinho’s lack of recent efforts – the final comparison will level that playing field and focus on each player’s most recent form. Here is how the group has performed in each of their 20 latest freekick shot attempts.

It is very revealing stuff. Messi has had the best chances to score based on xG, but he has actually been underperforming by a good amount. Inefficient and underperforming – this is the Messi that has been lining up to take free kicks recently.

Taking all of this into account, should Messi still be taking every free-kick in shooting positions?

At the end of the day, he is one of the best freekick takers of this era, and arguably of all time. The fact that the Argentine is going through a slump does not mean he suddenly lost the ability to score. Eventually, Messi is most likely going to bounce back and start converting every other free-kick he takes. It may not be at his peak rate, but it will be better what it is currently.

Then, there is the Messi effect. That is, the fact that La Liga opponents know him, respect him, and fear him more than any other player. Not only can this make opposition players timider with their defending, scared committing a foul, but after one has been committed, Messi’s gravity opens up new opportunities.

Gravity, in this case, means the way in which Messi impacts the positioning of defenders, and how much of the attention he draws. That is what leads to situations like these:

That last example – from Barcelona’s 2-2 draw at Celta Vigo in the 2019/20 season – is a perfect example of the benefits this can have for the team. Because of Messi, the defenders line up in a way that they would for nobody else, which can cause chaos. Then, as he sucks in all of their attention, a simple lofted pass to Luis Suárez leads to a Barça goal.

This fear that Messi instills in the opposition and the way he manipulates them can not be replicated, even when he is in poor scoring form. Keeping him on the ball can lead to more situations like these. Thus, sticking with Messi on freekicks would not only likely see him bounce back from his slump, but it would also open the door for more creative, dangerous set play design.

With all of that being said, though, the right decision certainly seems to be to decrease Messi’s dead ball responsibility. One prominent reason actually has nothing to do with his poor freekick taking form, it is the fact that the club need to start their transition to life without him.

As sad as it is, Messi is aging, and he came close to departing already. It would benefit the side to start phasing him out of some duties at least partially.

Additionally, lowering Messi’s workload would be for the good of the squad right now. If a player is struggling to score freekicks, why have him continue to take all of the opportunities? Splitting up the responsibility would allow for someone else in more clinical form to come in, while decreasing the pressure on Messi and still giving him enough opportunities to make an impact and get out of his slump.

Who should that second taker be? Based off of career production, the choice would have to be Miralem Pjanić. Based off of most recent form, it would probably be Antoine Griezmann and then Philippe Coutinho.

So, there is not a clear choice as to which player should see an increase in their freekick taking volume, but it certainly seems like it would benefit the club to try out the different options.