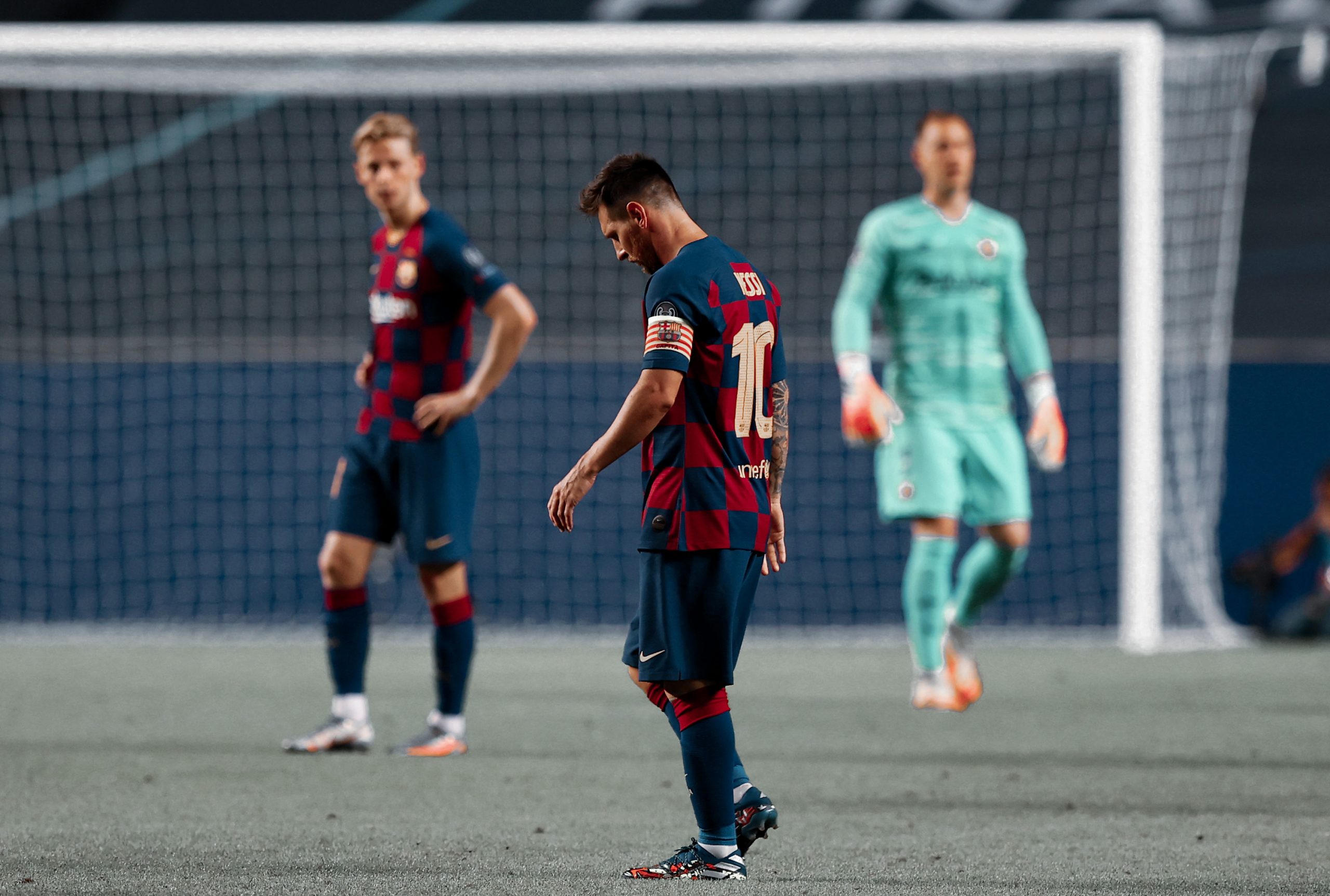 Lionel Messi and Barcelona have always been one unbreakable force. Never in a million years would football fans have thought Messi would be leaving Barça before his retirement, let alone join a European powerhouse. As the move seems as close as it has ever been, it is time for fans to endure the decision and evaluate what’s next for the club.

Barcelona are not having the best of seasons this year, and the humiliation at the hands of Bayern Munich seemed to be the rock bottom. But as Barça slowly reeled from the chains of mortification, a bombshell of news dropped this week. Reports emerged that Barcelona superstar and captain Lionel Messi wanted to move away from the Camp Nou. The message shook the entire footballing fraternity, let alone the culés.

As days pass, the idea of the one-club man leaving Barça appears imminent. Losing the captain and a club legend will be a big blow for any team. But when the player is also arguably the greatest of all time, you know, disaster awaits. The overarching effect on the club could be massive, and the immediate future of the team would be in limbo.

However, when it comes to supporting a club, any football club, the team comes before anything or anyone. Not even Lionel Messi supersedes the above notion. While it is disheartening to contemplate the idea of him leaving the club, it is necessary to think about what little merit it can achieve.

Every well-run football club in the world spend their money efficiently and keep their expenses in check. One of the main aspects of this is to have a wage cap, which limits the amount of money they can spend on a player’s salary. While not every club has this rule, they make sure not to overpay their players or give in to their demands. But, unfortunately, looking at the wage bill of Barcelona, the implementation is far from ideal.

The Catalan club’s wage bill is among the top three highest in the world. It amounts to more than half of the club’s total expenses. The alarming wage bill is one of the reasons for their economic struggle during this period of crisis. And undoubtedly, a large chunk of this wage bill amounts to the salary of Lionel Messi.

While no culé wants to see Messi leaving Barça, it would give the club some much-needed air to breathe economically | Photo by David Ramos/Getty Images

There is not one person in the world that can argue that the best player in the world does not deserve this money. But, if he does leave the club, the wage bill will seem far less scary. With other senior and high-earning players like Luis Suárez, Arturo Vidal and Ivan Rakitić possibly moving away, there is a chance to get the wage bill under control. While it is not Messi’s fault that he earns this much or the wage bill has increased exponentially, his departure would help the club financially. Much to the delight of the incompetent board in place.

Football has moved on from rigid formations and structures. The players occupy spaces with more fluidity resulting in smooth transitions and control of the game. Under Quique Setién and for some part under Ernesto Valverde, Messi got deployed on the right wing. While he was an explosive winger in his early days, his pace and stamina have decreased now, and he tends to drift inwards towards the central zone. While this has kept him closer to the goal, the space he vacates on the wing gets rarely utilised.

With Messi not in the line-up, proper wingers like Francisco Trincão or Ousmane Dembélé could finally stretch the opposition to the wing areas. While this would have worked even with Messi as a false nine, there are other complications. Players like Antoine Griezmann and Philippe Coutinho could have a better campaign as they could finally occupy their comfort zones which Messi generally dominates in. The central zones would be less crowded, and Barça could hope to obtain numerical superiority throughout the pitch.

Messi has been covering the team’s deficiencies for years, but his particular nature has been a great conditioning factor for coaches | Photo by Aitor Alcalde via Getty Images

While Messi’s attacking exploits are second to none, his defensive contribution has decreased over the years. When it comes to the defensive aspect of the sport, a proper structure and shape often seem better. Attack as a team and defend as a unit is a general philosophy, and the blaugranas currently are not the ideal example for the same.

With Messi and Suárez in the picture, Barça essentially defend with nine men behind the ball. When the younger, less proven footballers replace their experienced counterparts, they tend to work harder to impress the fans and the gaffer. The team will naturally have more energy and zeal to succeed as new and young blood enter the fray. The pressing intensity and general tempo of Barcelona can finally increase.

Ripping off the band-aid

Barcelona fans had to go through several humiliations in the last three years. Roma, Anfield, Valencia, Bayern were salt on wounds of each underwhelming season. After every one of them, fans hoped that it was the last straw, and Barça would somehow rise back up. But each one was worse than the previous. The latest one looks like an all-time low, and the pressure for rebuilding has never been more crucial.

The general consensus of the club has always been to base the team around the Argentine. Still, rebuilding around Messi now will only result in yet another meltdown when he leaves or retires in the future. If Messi leaving materialised now, Barça could avoid another potential rebuild and start from scratch now. Barcelona could finally move on from the so-called Messidependencia and work on improving the youth and preparing them for the future.

Yes, the team will lose their x-factor for clutch games, and there will be no fear factor when opponents face Barça. Nonetheless, the Catalans do have talented and gifted footballers among their ranks and certainly do have the pull to attract talents across the world. Griezmann, Coutinho were match-winners on their own in their previous teams, and there is no reason why they cannot step up now.

Lionel Messi leaving Barça does not feel right. It is far from ideal. But, with the situation escalated beyond reversal, it is only right to think about the future and the best interests of the club. Saying farewell to club’s greatest ever player will not be easy, but there’s always some good in goodbye.