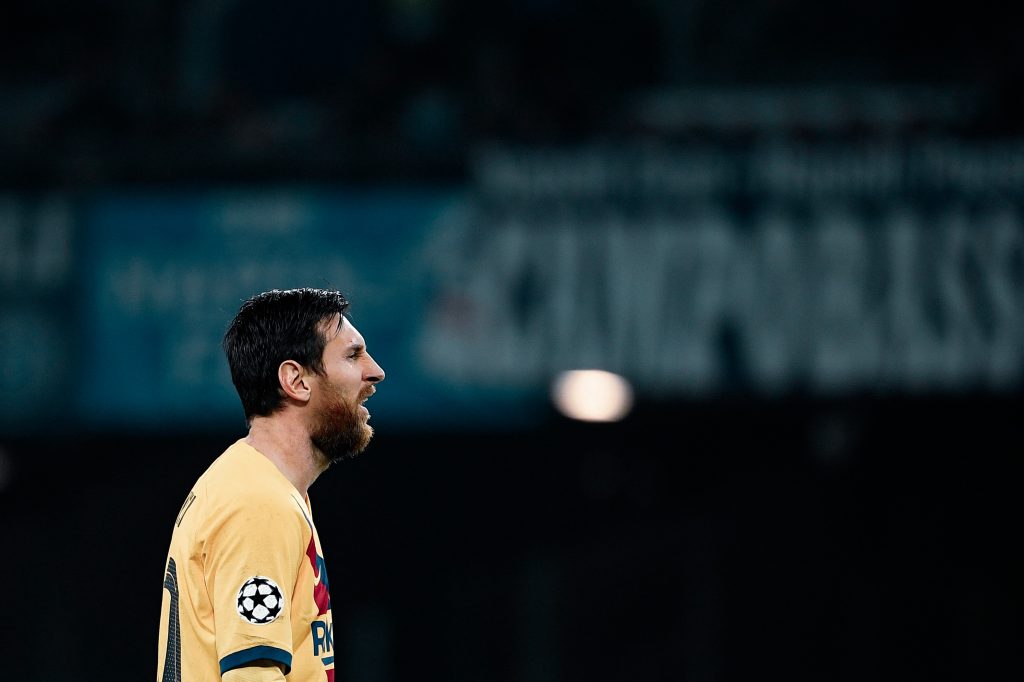 With the passing of time and loosening of the collective tactics, Barça have gone to rely on Lionel Messi more than ever. But this will have to change if they are to aim at the Champions League title.

That scent, that smooth fragrance, that sweet perfume of the most iconic anthem there is in football. That melody, is here. With just a few hours dividing Barcelona from its next European challenge, the harmony inside the Ciutat Esportiva Joan Gamper is already anxiously buzzing for football. And there is no better football than the Champions League one.

As the greatest club competition in the world is approaching its new beginning, the unknowns are many, the doubts are even more. A new format, a new timeframe, a new way to approach the competition are only some of the numerous aspects that have to be decrypted this time. Unique circumstances lead to unique solutions. But at Barcelona they are not really unused to such situations. What the hell, they are too used to it.

While the factors surrounding this last third part of the season are different for everyone and in any way by any other historic happening, Barça loves to get a little too comfortable, a little too early. Especially in the last five years or so. As the legends and the superstars has slowly left the club, one thing never changed though: Lionel Andrés Messi. And that’s the problem.

Before starting to call me mad, let me explain. It’s obviously not an issue the fact that the greatest to have ever kicked a ball is still playing at the Camp Nou. Of course it is not. The issue comes when your team depends mainly on that single individuality. However good he is, no matter the influence he may have on the game, nevertheless the greatness he constantly displays on the pitch, we are talking about an individual’s brilliance in a collective’s game. And Leo Messi is the very maximum in all those categories.

“They are playing with a new system which makes them even more dependent on Messi, as he is responsible for making a difference with his dribbling, shooting from outside the area and combining with teammates. But as we saw against Napoli in the Champions League, Messi is targeted by opponents and if he doesn’t show up the team immediately feels it”

In a timeframe where the Barcelona environment is each day more and more downhearted from the sad vision the club is showing, being solely reliable on a player just adds more fire to the chimney. As much as Barça fans should be honoured and football enthusiasts lucky to witness the greatest player of all time playing in their own era, it comes with great sadness seeing a club not providing the right supporting cast to a yet aging human being.

As years go by, the team’s dependance on Messi is proportionally increasing, while his legs are actually decreasing their pace and fatigue capacity. Instead of helping the Argentinian to complete the masterpiece, to get that cherry at the top of the cake, they are actually making him putting together that cake by his own.

Messi should lead, but not carry, Barça | Photo by Marc González Aloma / Zuma via Imago

The levels depicted by the Champions League are the very best you could find in the world, in terms of football capacity. While the probability of winning the trophy is greatly influenced by a luck component, as all knockout trophies are, the skills that set the tone of the competition should still be the finest you should have to get your standards right. There is not much time to think, usually. This time, there’s definitely none.

One legged-ties and conditions’ uncertainties have given the freedom to the underdogs to run as fast as they can, while the most experienced teams the chance to prove their worth. Unpredictability can run its course, too. It is a circus, you will have to be able to ride it.

This high standards set by the competition is a clear outlook on how you will be able to win it: unity. Only a cohesive group of players, fully committed and at their maximum effort, can believe and dream to lift this trophy. And as any healthy group, there has to be a leader. That captain that holds up the ship and makes sure that it is managed the right way. That icon that leads the way and helps to carry it. He does not put the ship on his own shoulders, but he rather shares its weight with the rest of the crew. A leader leads the way, but only the strength of the group can actually carry the journey to its completion.

Let alone what Messi has done for football, what he has done for Barcelona is something unrivalled. Something that no human being will ever be able to surpass, nor replicate. The numbers cannot describe the greatness of a player like Leo, but they can still show a pretty good outlook on what he means for the club: 10% of Barça’s total goals scored in its history came from Messi, whether by netting the ball or by providing an assist. Insane stats, but you still expect something like that from the greatest.

But as we approach Barcelona’s clash against Napoli in the second leg of the Champions League’s round of 16, it is interesting to take a closer look at some dynamics in the continental contest. While Messi is scoring in his 15th consecutive Champions League season, there are some numbers that outline a deep discouraging issue at Barça.

Since the 2017/18 season, which is the first season where Messi’s natural successor Neymar Júnior left the club for the promised wealth granted to him by PSG, Barcelona’s goalscoring stats could have been incredibly negative, if not for the little man. In this specific timeframe, the little genius scored 20 goals in the competition while Barça’s second top scorer has been…ehm, own goals (7)! If you cannot spot the Catalan club’s reliance on the number ten and his influence on the game live, while watching the matches, week after week, you should get your eyesight checked; if you still cannot spot it after hearing about this stat, you should get yourself checked.

Again, when 12 goals in 10 games and a ten out of ten performance in a first leg of a semi-final that ends up in a triple lead it is not enough, you have to admit issues. Liverpool was a complete depiction of Barça’s situation: two goals and an extraterrestrial performance in the first leg, four chances created in the second leg, and Barcelona still managed to suffer its second consecutive European debacle. What else?

There should be a supporting crew that actually supports the main character, and physically there is. While Barça’s roaster is not as impressive as blaugrana fans are used to, in terms of volume in this particular aspect, there are players who could load off some pressure and weight from Messi’s shoulders. The likes of Luis Suárez, Ousmane Dembélé, Ansu Fati and Antoine Griezmann are only his attacking partners and are amongst the elite in football. However, having a name is not enough anymore.

The Uruguayan is already a couple years that has been slowing down rapidly, while Griezmann is yet not comfortable with Barça’s style. The youngsters out there are wonderkids, but while 17-year-old Ansu is over performing and actually doing the best he can, even with clear, natural, teenager’s self-seeking issues to be controlled, Dembélé is constantly worrying about not getting that diamond body of his rifted and, unfortunately, he is losing that game with the same rate.

Leo Messi has been giving away hopes after hopes, season in and season out, for years now. His involvement in both the team’s chances building and eventually their finalisation has been increasingly staggering and has also been the reason why last season, the 2018/19, has certainly been his most complete and, arguably, his best one.

“It’s true that there are players who think of connecting with Messi too much. I would do it too. Messi resolves 90% of this team’s games”

No matter the goals, no matter the assists, no matter the key passes nor the chances created, his implication in the team’s performance is abnormally higher than what you can ever expect. His stats compete with teams, not with other players. And while this acknowledges yet again his greatness, it also indicates how this Barcelona side is just Leo Messi, in his good days and his bad ones. And often it is not even enough.

While waiting for some sort of miraculous event to have occurred during this three weeks period, every football fans know that you cannot expect a complete overturn of a situation in that short period of time. Even if Quique Setién miraculously found the secret receipt to the poison, it couldn’t have the time to deliver its effect. And since the Barcelona manager hasn’t found any solutions to Barça’s dependability to Leo since his announcement in January just as his fellow colleague, Ernesto Valverde, it is difficult to predict a sensible change.

“I always say to my players that if the ball is at the feet of the best players, there’s a chance things will turn out well. That’s why they look for him [Messi], you know that he will do something. This dependence is normal. I prefer that they give it to him. I’m relaxed”

What has to happen, though, is being able to witness more harmonious movements throughout the entire squad. The result of a constant training on principles and ideas has to eventually give its fruits, in one way or another. The everlasting sensation of accomplishing something worthwhile, still, has to be something developed through the years, through a style, through a club identity that, unfortunately, has been widely disregarded in the last few years at the expense of an alien.

Make no mistake, how come Barcelona is always labelled as favorites even in such critical technical, tactical and environmental conditions? One name: Leo. One surname: Messi.