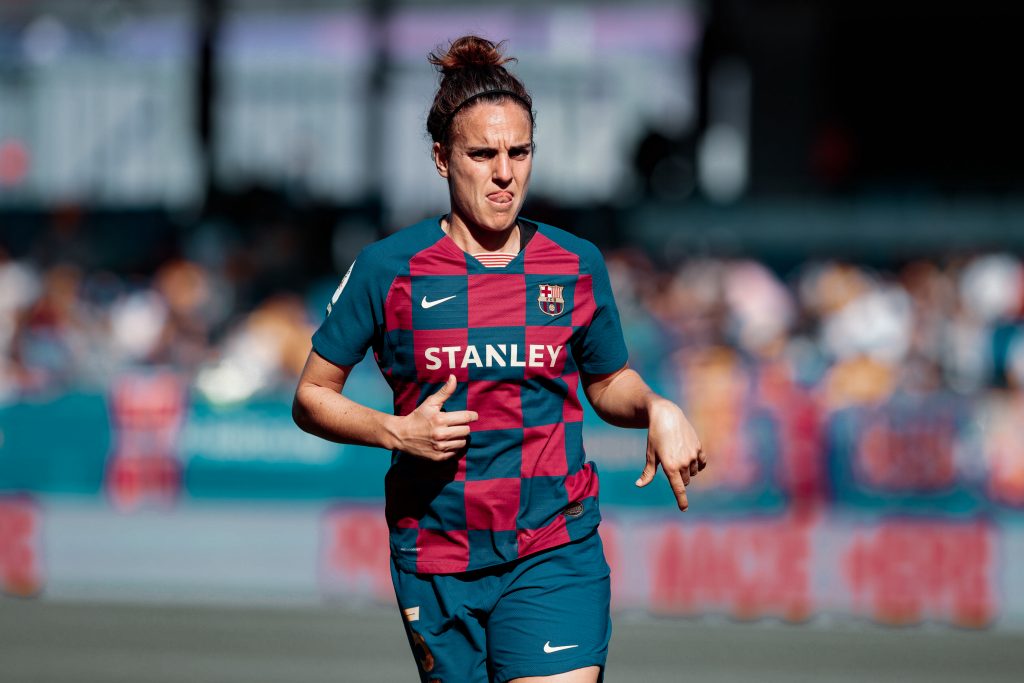 For her longevity, belief, devotion and passion, 30-year-old Melanie Serrano is one of the greatest legends of Barça Femení.

Melanie Serrano, the rock figure of Barça Femení, completed her sixteenth season at the club this past month. Easing into her thirties and seasoned with an untouchable 448 appearances, the defender continues writing more golden pages in the history of Barça Femení. Melanie is a fighter who has fought with tooth and nail to make the women’s section of FC Barcelona heard loud with a roar.

Are there any female footballers who have remained loyal for sixteen years to the club where they started their career? If we consider men’s football, there are plenty of players like Lionel Messi, Steven Gerrard and Ryan Giggs who have that type of loyalty. Unfortunately, devotion to one club in women’s football is much more difficult, due to the frequent issues of instability, the financial struggles the players face and the limited budget the clubs are offered.

Melanie went against the standard and remained with Barcelona through thick and thin, from when they were relegated to the Second Division to when they reached their first UEFA Women’s Champions League final 11 years later. There was a chance that Barça Femení would be dissolved when they were relegated in 2006, but Melanie stood firm in her belief that the club’s golden age was yet to come. As a result of her devotion, she enjoyed Barcelona’s long period of dominance in Spain when they won the league in four consecutive seasons between 2012 and 2015. Her undying commitment is a prime example to young players who may be facing similar struggles.

Melanie Serrano did not forget to pack her wishes in the suitcase when she left her home for family reasons at just twelve years old. Barcelona gave her a home when they welcomed Melanie in at fourteen, and never let her go. Accompanied by hard beginnings, Melanie knew how to adapt to adversity while still fighting with a longing for success that drove her path. For her, the bustle echoing in each train station, as well as the concern of leaving each training session early to avoid losing the last train heading home with the night closed without knowing it, to which she would become a living legend 16 years later.

The team suffered one of the hardest blows of recent times with the relegation in the 2006/2007 season and the flirtations with a possible suspension of the women’s section tested the faith of colours that Melanie did not hesitate to defend. She got offers from other countries and clubs but remained faithful to the culés. Even the likes of Vicky Losada left for the following season to go to Espanyol, but Melanie remained. Under the flight of indisputable pieces, Melanie bet with faith for continuity at Barça, championing the return to the Superliga. In the 2008/2009 campaign, Melanie became one of the key players under the then-coach Xavi Llorens, rewarding Melanie’s exertion, perseverance and loyalty.

From the deepest darkness to touching the sky of Barcelona. After the new promotion, Melanie, along with Barça Femení, managed to win four leagues titles consecutively: 2011/2012, 2012/2013, 2013/2014 and 2014/2015. This strengthened the foundations of a love that lasts over time and preluded to the most successful era in the history of the female section of FC Barcelona. In her record, she treasures all the titles that adorn the showcases of Barça, becoming the most capped player and the bearer of a shield that is not understood without her presence.

While her minutes have significantly dropped in recent seasons, Melanie continues to be a key figure inside the dressing room

A total of five leagues, five Copas de la Reina, one Spanish Super Copa Femenina and nine Catalan Cups supply the large baggage of titles from both the Andalusian number 5. She has always gone in accordance with the successes of Barça Femení. Forged with a special character, Melanie has managed to stand out exceptionally in any corner of the pitch, dazzling both in the centre and on the left, her most natural position. In love with the ball, what started as a longing ended up becoming her way of understanding life.

As the only remaining survivor of the darkest times for Barça Femení, she showed that you can succeed with a good dose of patience, work, and humility.

Tempted by the greats, Melanie never hesitated to scare away the siren songs that posed on her figure to continue defending the colours of the club of her life. Writing about a player of Melanie’s caliber gets you emotional, and gratitude is what she deserves. The legend who stood with Barcelona for her entire career and still remained faithful defending its colours.

Under the heat of an impregnable union, the Seville-born woman continues to rise as the voice of experience in Lluís Cortés’ squad.

After the 2019 final of the UEFA Women’s Champions League against Olympique Lyonnais, Serrano wants to reissue the feat of the previous year and would place the icing on the cake with a European title this season. One of the pioneers of the great change in women’s football. Always attached to the history of Barça, she wants more: to bring the Champions League trophy for the most devoted player of Barça Femení. She may not posses a similar set of skills like the other greats, but she more than deserves a place at the club’s hall of fame for her unshakeable faith and her incomparable longevity with FC Barcelona.

• How would Damaris Egurrola fit into Barça Femení?

• Aitana Bonmatí: The future of Barcelona, Made In La Masía