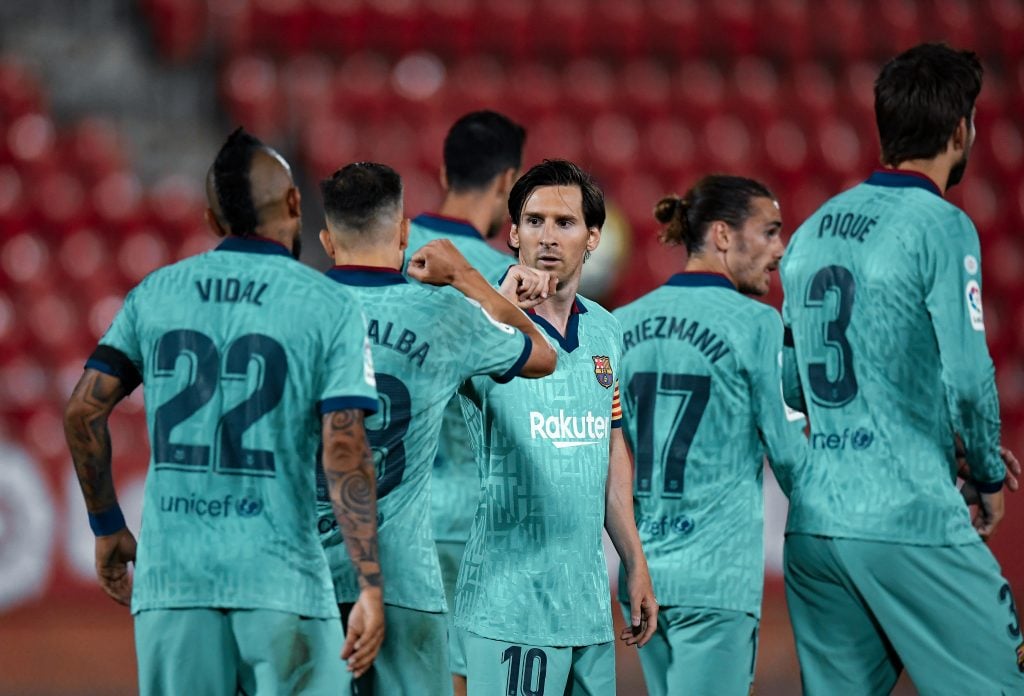 Three months that felt like nothing for Barça, who were competitive and ambitious from minute one in their return to action at Son Moix. A match review of the Mallorca 0–4 Barcelona.

Football had been patient. But Arturo Vidal wasn’t. 98 days were too much for the Chilean, who needed 65 mere seconds to exhibit his productive impetus. A hunter never loses his instinct. Hungry after more than three months without catching a prey, Barcelona pressed, Frenkie de Jong tackled, Jordi Alba crossed and Arturo Vidal scored. Just two minutes gone, but Barça already had the lead against Mallorca.

With plenty of time to search for ways to innovate, Quique Setién wanted to display his new tactical changes early on. To implement them he chose the most aggressive midfielder and forward he had in his squad. Vidal, from midfield, and Martin Braithwaite, on the left wing. They both scored. In the 37th minute, a sharp Lionel Messi assisted Braithwaite for the Dane’s powerful half volley. Striking the net with force, showing that the absence of football had not affected him.

There was some significant asymmetry in the system, but with the objective of compensating all of the players’ movements and natures. If in Setién’s debut match versus Granada he had introduced an unusual back three formation with many footballers in unnatural positions, experience had made Quique reconsider and aim to exploit each one’s best virtues in his preferred position.

This seems to be the new normality for Barcelona, but the old fashion is also back. Beardless and with longer hair, Lionel Messi’s new look is reminiscent of older but golden times. Starting significantly wide on the right wing, in spite of drifting inside often, Leo looked fresh, fit and motivated. Rejuvenated. Happy, after all. Happiness for the number 10 cannot be understood without his best friend, though.

With 35 minutes ahead, Luis Suárez re-appeared for Barça, but for the first time under Setién. Having got injured in January’s Super Cup clash with Atlético de Madrid, in a loss that costed Ernesto Valverde his job, Suárez’s season was supposed to be over. Until tragedy, in the form of pandemic, happened. Determined to look at the bright side of the situation, Luis took advantage of the long break to join the party for the odd end of the campaign.

Quique Setién hadn’t wanted to risk Luis Suárez at first, just like he had left Samuel Umtiti and Arthur Melo on the bench with their often problematic fitness. 21-year-old centre-back Ronald Araújo got his first start, and second appearance, for the first team, while Vidal played 45 minutes before being subbed out at half-time for Iván Rakitić. Far from rusty, the blaugranas were liquid. With full-backs very high and long but purposeful spells of possession, everything looked smooth for the visitors at Son Moix.

Always direct and determined, Martin Braithwaite proved once more that succeeding at Barça is more a matter of appropriateness than of quality. Selfless in his off-ball movements and aggressive with space, the former Leganés man knows his strengths and weaknesses, and his role. He executed Setién’s demands to perfection, while Messi had fun too but with an opposed style. Assisting Braithwaite in the first half, the little genius had time to record one more assist and a late goal in the second.

Jordi Alba, assister of Vidal’s goal, found the net himself after Leo’s fabulous pass. Alba and Messi, Messi and Alba, the connection doesn’t seem to fade away. Every pass was synchronised and well-timed, just like the entire block. With the distances well-measured and the required associative plays, Setién surely had little complaints on his team’s response.

❛ The feelings in general are good, you always have to be attentive for things to improve on, but I’m satisfied. We have shown effectiveness and we have been good on the ball ❜

With a break that was longer than the summer holidays, many asked for a mini preseason to take place. But, with the tight title race and with Real Madrid with only two points less, Barcelona took the game as a final rather than a preparatory friendly. With the competitiveness of the biggest duels, the Catalans cared little about the circumstances. Players like Lionel Messi and Martin Braithwaite take no off days.