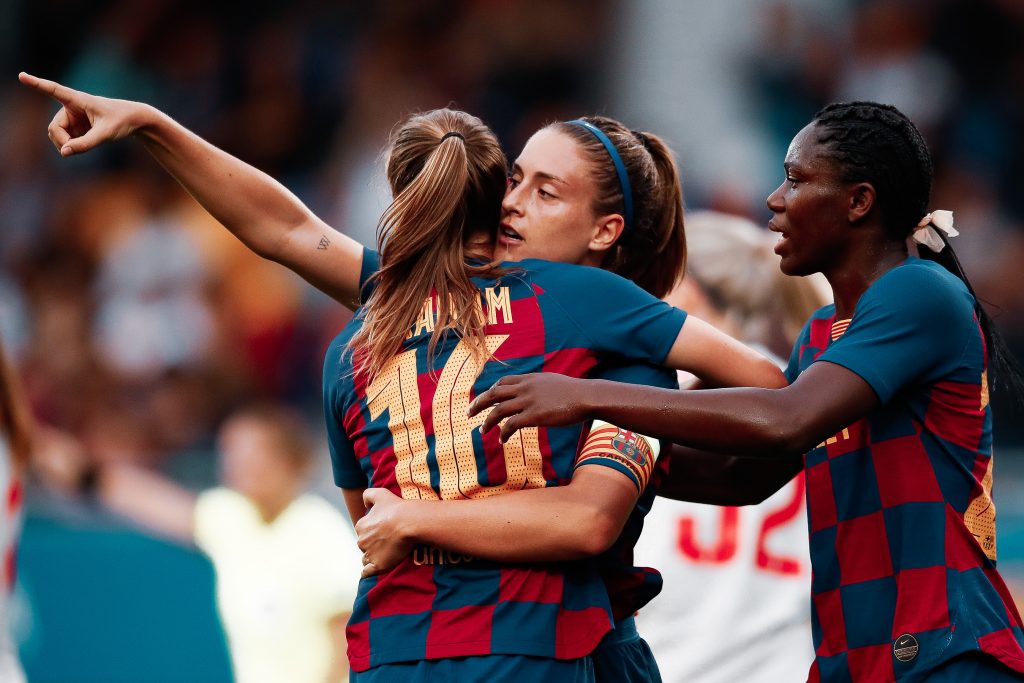 With just three games needed to be crowned Women’s Champions League winners, this is the match preview of Friday’s quarter-finals duel between Atlético Madrid de Femenino and Barça Femení.

After almost six months of waiting, FC Barcelona Femení are finally back on the pitch this week for the biggest match of their season so far. The blaugranas‘ UEFA Women’s Champions League campaign will resume in the quarter-finals against their Spanish rivals Atlético de Madrid Femenino.

On Friday, the Primera División rivals will meet for the fourth time this season, and the rojiblancas will surely be aching for a win after being completely swept this term by their Catalan rivals. Atleti were taken apart in a 6–1 defeat by Barcelona earlier in the campaign, in a series of results that didn’t improve much when they drew Barcelona 0–0 at home and then narrowly lost 2–3 in the Supercopa Femenina semi-finals.

Following the COVID–19 pandemic, Barcelona were 9 points clear in the league and were given the title after the RFEF chose to cancel all non-professional leagues. This decision was lamented by Atleti, who finished their domestic season without a trophy for the first time in years.

This past season isn’t the only bit of recent history between the two clubs. In recent ears, the rivalry between the Spanish giants has attracted a lot of attention, most notably because their second league meeting in the 2018/19 course set a world record for attendance at a women’s football match. Both sides have gone back and forth with domestic title success for the past half-decade, sharing the Primera División and Copa de la Reina titles between them season after season.

Rivalries aside, meeting on this scale is a major landmark for Spanish women’s football, for it will be the first time two Spanish teams have made it to the quarter-finals of the Women’s Champions League in the same campaign and the first-ever match between two Spanish sides. Additionally, the match will be played in Spain at San Mamés, Bilbao, so both teams will be playing on familiar ground in their home countries.

“I don’t know if it favours or hurts us, but what is clear is that it conditions us. There are good and bad things but we are prepared for this type of games. External factors don’t affect us, but the margin for error is slighter”

This summer, Barcelona has retained almost the exact same team from the last season with the exception of Stefanie van der Gragt and Pamela Tajonar, who departed the club. Instead of making signings, the club decided to replace the players by promoting Laia Codina, Jana Fernández and Bruna Vilamala from the B team and introducing keeper Cata Coll after her loan at Sevilla. Overall, the team looks fairly balanced and settled in defence, midfield and attack.

There has been some talk that they should reinforce their defence, but otherwise, they look to be one of the favourites to win the title with a star-studded line-up including Mapi León, Alexia Putellas, Lieke Martens, Caroline Graham Hansen, Jennifer Hermoso and Asisat Oshoala. The latter four make up a lethal frontline which has the potential to cause trouble for any European team.

Atleti, on the other hand, has gone in the complete opposite direction with their summer transfer window. Some of their most important starters left the team, including their star goalkeeper Lola Gallardo, Olga García, Sari van Veenendaal and Kenti Robles. Virginia Torrecilla is also out indefinitely as she recovers from the removal of a brain tumor.

In turn, Atlético made some quality additions with the signings of Merel van Dongen, Alia Guagni, Pauline Peyraud-Magnin, Jade Moore, Turid Knaak, Grace Kazadi, Deyna Castellanos, Emelyne Laurent and Hedvig Lindahl. The major overhaul in the colchoneras‘ line-up was focused on strengthening the defence and replacing the vacant keeper position while the midfield and attack remain almost the same.

“We don’t know what we will encounter. This reinforces the idea of focusing on ourselves and our weapons. All we could do now are just hypotheses”

Preseason was going well for Atleti until one of their staff tested positive for COVID–19, forcing the club to suspend the friendly against Athletic Club. To add salt to the wound, this past week Atleti released a statement in which they announced that they were halting training after five players tested positive for coronavirus. The team returned to training four days ahead of the quarter-final clash but with little to no preseason matches to build team chemistry after a major squad overhaul. Silvia Meseguer, Deyna Castellanos, Charlyn Corral, Laia Aleixandri and Leicy Santos are the five players who tested positive for COVID–19, almost all of which are major figures in the Atleti squad.

With UEFA’s new rule for which the clubs can register six new players for the knockout stages of the Women’s Champions League, Atlético has chosen to register Lindahl, Laurent, Guagni, Van Dongen, Moore, and Knaak, leaving Pauline Peyraud-Magnin, Deyna and Kazadi out of the squad. Ludmila will also be out of the squad for the quarter-finals for yellow card accumulation. The team selection is surely going to be a headache for coach Dani González, considering the number of players they have had to register that have no competitive experience with the team.

What can we expect?

Barca will likely try to impose themselves and dictate the game early. This will be done by deploying their usual 4–3–3 formation, with a standard backline of Leila Ouahabi, Mapi, Andrea Pereira and Marta Torrejón, and Patri Guijarro holding the midfield as a pivot. Alexia and one of Aitana Bonmatí or Jenni will most likely play ahead of Patri to feed the attackers ahead of them.

Lluís Cortés can also go with a 4–2–3–1 formation with a double pivot consisting of Alexia Putellas and Patri. In this scenario, Jennifer Hermoso, Caroline Graham Hansen and Lieke Martens would be behind giving support to the lone striker up top, Asisat Oshoala. The bench strength of Barcelona looks stronger as well with the likes of Mariona Caldentey, Aitana Bonmatí, Kheira Hamraoui, Vicky Losada and Ana-Maria Crnogorčević.

Because of their thin forward pool, Atlético will go heavy in either midfield or defence, likely with a 4–4–2 formation. This will be to minimise the damage that Barcelona’s forwards and midfielders can cause and to counter using Laurent and Toni Duggan. Barça’s quality in the final third and the much better preseason they had will prove to be a major factor in deciding this match.

Barcelona have a curious situation with how they will line up their forwards and midfielders. By this point, Lieke Martens, Caroline Graham Hansen, Asisat Oshoala, Alexia Putellas and Patri Guijarro are all guaranteed starters. Assuming Barcelona keep a 4–3–3, this leaves the starting position in midfield to go to one of Jenni Hermoso, Aitana Bonmatí, or even Kheira Hamraoui or Mariona Caldentey. Cortés could follow through with any of these four players depending on his game plan. This would be their XI at full strength:

Predicting an Atleti starting XI is difficult due to their drastically different squad and notable absences. Atlético also has many players registered that haven’t had any game time whatsoever in a full starting line-up. This is the best guess at how they would set up at full strength_

Players to watch out for

Lieke Massed missed half of the previous season due to a toe injury that she suffered with the Netherlands at the 2019 Women’s World Cup. Her return to the pitch in early 2020 was marked by a Player of the Match performance against none other than Atlético de Madrid in the Supercopa Femenina semi-final. In the weeks that followed she returned to full form and clicked very well on the left with Asisat Oshoala and Alexia Putellas. Lieke is fully fit now and hungrier than ever, something she mentioned in an interview to Barça TV earlier this month.

“The Champions League is a very beautiful tournament and in nine days you can win it. UEFA has done well to be the same for boys and girls. It’s great to have kept the team, last year it was very good. The group dynamics are good and with just following you can continue to learn. All last year I was able to play a few games. Now I have a fresh head and I want to win everything I can”

The Dutch star has some unfinished business when it comes to the Women’s Champions League and she will be playing a key role in getting the trophy to home to Barcelona.

When Alexia last played a competitive match, it was with Spain at the 2020 She Believes Cup. Her elite performances against Japan, England and the USA earned her the award for tournament MVP ahead of players like Christen Press and Julie Ertz. Prior to that, she was on fire with Barcelona and was one of their most instrumental players on the pitch. Barça co-captain’s return to play will surely be something to look forward to.

Oshoala was one of the breakout players in Europe this past season. Her staggering 20 league goals took Spain by storm as she finally started to establish herself as a regular starter for the team. Oshoala’s stats for the month of February 2020 are bizarre: she played in 6 matches across three competitions, scored in every match, and scored twelve goals in total, including three braces and a hat-trick. She hasn’t let up in preseason either and has been deadly up top in the striker position. Asisat seems more than ready to show up big this week.

English striker Toni Duggan has a lot to prove in this match against her former team. After feeling unsatisfied with Barcelona’s mentality following last year’s Champions League final, she opted for a move to Atlético de Madrid. In her first season with the Madrid-based club she scored six total goals, a steep drop from her 15 total goals with Barcelona in the 2018/19 campaign.

However, when the time came and the clubs reunited in the Supercopa Femenina, she showed up to score Atleti’s first goal in a match that ended in a 3–2 loss against her former club. Duggan remains one of Atleti’s few forwards that have gone unaffected by suspension, a COVID diagnosis, or UEFA’s eligibility rules, so the team will be counting on her to show up.

• Sonia Bermúdez is the only Barcelona player to score a hat-trick against Atletico, which she did in the 2013 Copa de la Reina semi-finals

• Barça have won 5 out of 7 knockout matches against Atlético de Madrid Femenino, including the Copa de la Reina and Supercopa Femenina

A poorly prepared Atleti will be tested against the best team in Spain in a high-pressure match. Though the odds are against them, it will be a highly competitive match that will be huge for Spanish women’s football and could very well be a preview of what’s to come in the 2020/21 league season.