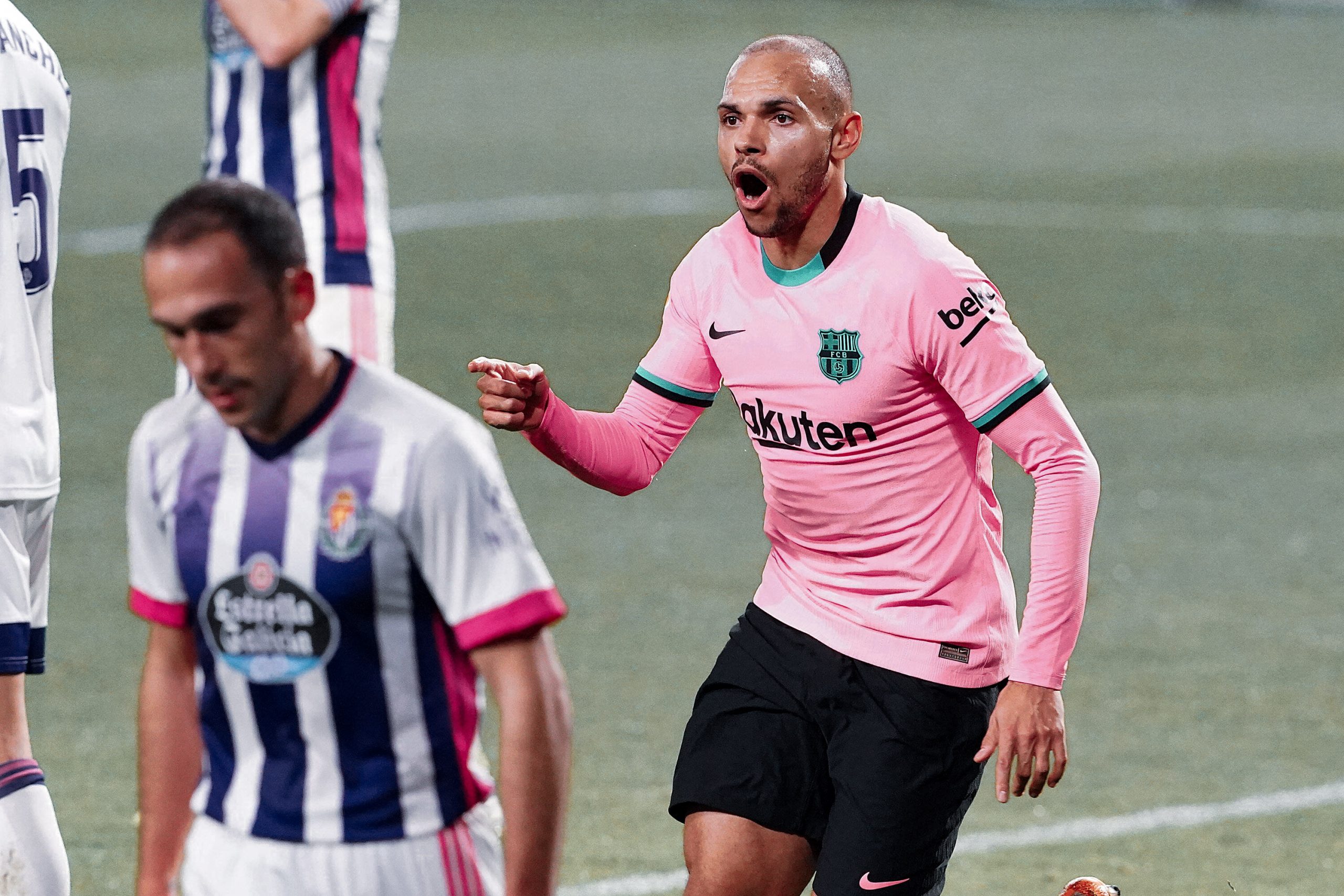 Having arrived at Barcelona as nothing more than an emergency signing, Martin Braithwaite has evolved into one of Barça’s most vital players this season, despite the seemingly insurmountable odds that were pitted against him, long before his first kick off the ball.

The ex-Leganes player has seen an unprecedented shift in his playing style under Ronald Koeman, and with every passing week, even in a star-studded squad, he now looks like twice the player he was when he arrived.

Admittedly, the Dane arrived at Barcelona by default, rather than by design. Following the long term injuries sustained by both Luis Suárez and Ousmane Dembélé early in the year, Barça were essentially forced into making an emergency signing, as long as the player acquired was within La Liga — or a free agent.

The Catalans had options in Loren Morón, Willian José, and were strongly linked with Angél Rodriguez from Getafe — who even scored against them in the Nou Camp in the midst of these rumours. Then, out of the blue, the Blaugrana set their sights on their Madrid counterparts, Leganes, who were then in a tussle for survival in the Spanish top flight.

In and of itself, the transfer was made within La Liga’s laws and was perfectly legal. The problem, however, was more of a moral one, as Los Pepineros were powerless to stop Barca from snatching their most productive and valuable player via his buyout clause. This was the lowest of blows they could possibly take, as given they had already lost Youssef El Nesyri to Sevilla in January, they would now have to conjure up a way of finding the back of the net in a relegation fight with next to no offensive threat at their disposal.

On the 20th of February, Braithwaite arrived at the Camp Nou happy as a lark, as his childhood dreams of playing at a club at the magnitude of Barça had finally come to pass. It was a transfer that by no means sat well with the Lega faithful, as come season’s end, they packed their bags and set sail for the trip down to the Segunda División.

A messy start to life

The expectations placed upon him were staggeringly low, and it initially seemed like a lose-lose situation, both for the club and the player himself. Braithwaite had essentially tarnished his reputation within a fanbase that had grown to cherish him and that were utterly dependent on him to keep their survival hopes afloat, by leaving Leganes.

Barça on the other hand, oblivious of the delicate financial situation they would find themselves in several months down the line, had dished out €18 million just to have Braithwaite start from the bench in most games.

In his first few starts, in spite of the odds, the Dane impressed. He had two cameo performances, the first against Eibar in a game that saw him set up one of Lionel Messi’s four goals in a 5-0 win, and on his second in the iconic Garnet and Blue of Barça, he came on as a substitute against Real Madrid and almost immediately got onto the scoresheet. In his final game before the lockdown, he played a whopping 89 minutes on his full debut for the Blaugrana and had a memorable performance to boot.

On football’s return following the four-month hiatus and reports that he had worked thrice as hard as was demanded of him, his diligence paid off as he scored against Mallorca in a 0-4 rout away from home. This could have been the start of something special, however, everything derailed from there.

In Barça’s away tie against Sevilla, he put up possibly the worst performance on the pitch, and this too from an almost globally dull Barça outfit. He managed not a single shot on goal or otherwise, nor a key pass in that match. Beyond this, he seemed completely and utterly lost on the pitch, knowing neither where to go nor what to do with the ball more than half the time.

From that moment on, up until the end of the campaign, he played just 118 minutes from the 720 available to him — with 65 of these coming in one match. Following the annihilation at the hands of Bayern Munich, the Catalans were more than willing to offload him, given his sheer expendability. He was not nearly valuable enough for them to keep, and several English clubs were more than willing to get him off Barça’s payroll and into the Premier League.

In identical fashion to his arrival, Martin Braithwaite’s stay at Barça was unintended. None of the aforementioned deals with the Premier League sides materialised, and, even though it didn’t seem so at the time, it was for the greater good of both the player and the club.

Throughout his journey, Braithwaite has been a paragon of hard work, determination, and persistence in his daily life and now, almost a year since he first set foot in Barcelona, the same, if not more, can be said about him. His unruffled spirit and infectious confidence were a heaven-sent for Ronald Koeman, especially in times as dark as this for the club on all conceivable fronts.

What he finds himself bereft of in quality, he makes up for in mentality and decision making. Such is the growth in his game reading abilities over the past few months that a player once considered dispensable by a large part of the fanbase now finds himself a core player in the team — and this too over the likes of Antoine Griezmann and Philippe Coutinho.

How so? It is an open secret that the key to success at Barcelona is dependent on how well one can get themselves to fit into Messi’s world. While players like Griezmann and Coutinho, more so the former, do this by being as involved with him as they possibly can, Braithwaite makes himself useful by needing as little of the ball as possible but offering much more elsewhere in return.

A criticism all too common with Koeman’s Barça has been one of congestion in the final third, with as many as three players, all occupying the same roles, interfering with each others’ movement, both on and off the ball, thus unequivocally rendering each other redundant. With Braithwaite, Messi and Pedri, this ceases to be the case.

The Dane offers both width and depth through his intelligent runs into space, freeing up the two creative players behind him in the process. As counter-intuitive as it may sound, it is in having as little involvement as possible that he betters the team to the most of his — limited — ability, and being selfless whenever possible.

Braithwaite: "Dembélé approached me and asked me to let him shoot the penalty, and I replied: 'Sure, take it.'" pic.twitter.com/XJI41FL9dY

Bar the moments at which he is indirectly aiding Messi’s cause, Braithwaite also offers himself upfront as the striker he was brought to be, and thus far has put up some impressive numbers; five goals and two assists, with five of these goal contributions coming in the UEFA Champions League, and four of his goals coming away from home.

His instinctive movements both on and off the ball get him — or others — into space, and while certainly not the best striker in the world, he still manages wreak havoc in opposition defences. For his unprecedented rise to prominence, he has turned out to be one of Barça’s most crucial players, and now looks twice the footballer he was on arrival.

Had Braithwaite’s trajectory been in a movie, he has gone through all necessary character development steps in his arc. He showed his motivations from early on to previous managers, these coming in the hope that he might one day play at one of the so-called “big clubs” in one of Europe’s top five leagues. He faced strong adversity, this exemplified by the fierce competition he faced against Luis Suárez and Antoine Griezmann, one he seemingly lost come the end of the 2019/20 La Liga season.

In spite of his visible weaknesses, he has found ways to mitigate them, and to such an extent, they are barely noticeable to the naked eye. This is only for Braithwaite to take full advantage of the few strengths available to him en route to his rise as a full-fledged starter at Barcelona. Thus far, this has been the perfect underdog story, and for everyone involved, we hope this remarkable tale goes on longer.