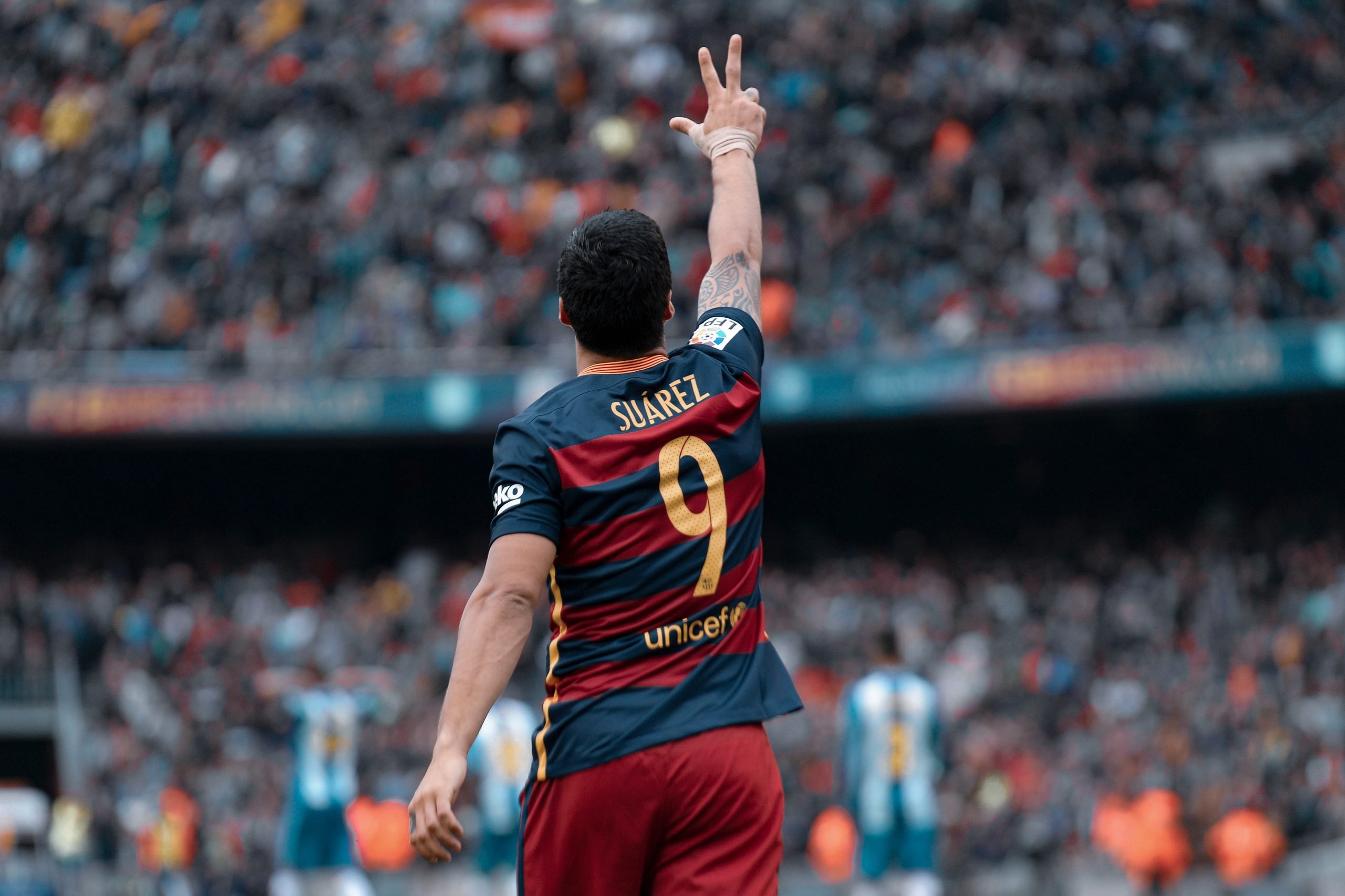 As Luis Suárez leaves for Atlético de Madrid for only 6 million euros in variables after six years at his beloved Barcelona, where his family lies, today we bid farewell to a club legend and one of the greatest to ever wear the blaugrana colours.

Football is a cyclical sport. Nothing lasts forever and, usually, the best players are worse when they are nearing the end of their careers, with the fans often demanding their players, no matter how beastly they were in the past, to go, especially at top clubs. The historical clubs have insane standards, often unrealistic, and work on the short-term future rather than the long-term. These legends often feel sad to leave their beloved clubs, but they have to understand that they might not bring joy to the fans they once mesmerised with their football.

During the last decade, Barcelona have had so many legends scoring, assisting, dribbling or saving their team many times. From Víctor Valdés to Lionel Messi passing by Carles Puyol, Xavi Hernández or Andrés Iniesta, these players illuminated the pitch for the culés to enjoy. After this team, Luis Enrique’s beast came in 2014 and won a treble in 2015, with one of the most prolific frontlines in the history of the sport.

Lionel Messi, Luis Suárez and Neymar, often called MSN, terrorised football for three years, obliterating everyone with their goals, skills, dribbles and assists exactly what Barça legends would do. The middle man was Luis Suárez, one of the best strikers in the history of the sport that made Ajax, Liverpool, Uruguay and Barça fans cheer for him, even in his worst moments. A controversial character, Suárez often did his talking on the pitch, especially at Barcelona, where he cut every controversy for peace of mind at the Camp Nou.

After biting Giorgio Chiellini on the shoulder during the 2014 World Cup, Suárez was given a four-month ban from football but still completed a move that would see him move from Anfield to the Camp Nou for 82 million euros. Then the rest, as they say, is history.

Following four months without football, the Uruguayan sniper had a baptism of fire away at Real Madrid in October which ended in a disappointing 3–1 loss. After that, Suárez was a different beast. Scoring left, right and centre against La Liga and Champions League sides. Suárez lifted his team whenever it needed him, with one performance, in particular, sealing his place as one of the most lethal strikers in Europe.

In the quarter-final of the Champions League in 2015, Suárez took it upon himself to harass David Luiz for 90 minutes. First, after Neymar opened the scoring, Luis Suárez took the ball from the centre circle and nutmegged David Luiz before going through on goal like a madman. His placed shot was too much for Salvatore Sirigu, the poor goalkeeper that night who couldn’t deal with such a rocket directing right through the top corner.

A few minutes later, Luis Suárez’s treatment of David Luiz would be worse as he breezed through him to place a shot in the corner of the goal. The game ended 3–1 for the Catalan side, with Suárez being the main talking point and his genius acknowledged by everyone. In La Liga, it was no different. Suárez destroyed everyone and finished with a respectable 16 goals, and that’s with a few months off because of the ban. 2015 ended with a treble for Barça and Suárez, who, after scoring against Bayern Munich in the semis and Juventus in the final, entered blaugrana folklore forever after such an impressive campaign.

Indeed, 2014/2015 was a year filled with trophies and achievements for the number 9 and the team. Still, his best season at the club will forever be 2015/16, the season where he pipped prime Lionel Messi and excellent Cristiano Ronaldo to both the Pichichi award and the European golden shoe, ending a few years of duopoly from the two cyborgs with another insane season at the club, his second in a row.

His best game came near the end of the season, away at El Riazor to the now third division Deportivo de la Coruña. Luis Suárez massacred a defence lost at sea for 90 minutes in a performance that summed up his season and can be summarised with one group of words: out of this world. That day Luis Suárez scored four and assisted three in an eight-goal dismantling of Dépor. The forward was superb, scoring volleys, tap-ins and trying to find a way for his teammates to get on the scoresheet too.

That term, Suárez finished with 40 La Liga goals, winning the Pichichi award and finishing as Europe’s top scorer after another season on top of Spain with a domestic double. In the Champions League, Luis Suárez tried everything but went out in the quarter-finals after scoring two in a comeback win at the Camp Nou against Atlético de Madrid and losing 2–0 on the away trip.

The year after that, in the 2016/17, the team played poorly, but the MSN was still sensational, obliterating everyone on their way only to fall against Real Madrid at the end of Luis Enrique’s cycle. This campaign was marked by one significant event that happened in March 2017, where the MSN did some damage. After a 4–0 loss in Paris, Messi, Neymar and Suárez took it upon themselves to set the records straight in Barcelona, and the latter was the main actor from start to finish.

In the space of two minutes, Suárez had opened the scoring and kickstarted the Remontada – comeback – against PSG in the second leg of the Champions League last 16. His header, although cleared, crossed the line after lobbing Kevin Trapp. He then continued to be poisonous in PSG’s defence as his presence became a nuisance for Marquinhos and the other defenders at the club.

After his Uruguayan teammate Edinson Cavani scored at the other end the all-important away goal and Neymar scored a beautiful freekick in the 88th minute, Luis Suárez won a controversial penalty after a sensational through ball from Lionel Messi. Neymar converted, but Suárez got his fair share of criticism for his exaggeration, but who can blame him when Barcelona were that desperate? He won the penalty and Barcelona would win the game and the tie thanks to Neymar and Sergi Roberto, the two main actors in the final scene, the goal of the Remontada. In those three seasons, Suárez was marvellous and probably deserved a Ballon d’Or for his 2016 performance.

After Luis Enrique’s departure, Suárez looked like he lost his mojo and didn’t have the best energy under Ernesto Valverde, with his heatmaps drastically changing from a lively striker to a cranky old forward who could barely run, a far cry from the tireless Barcelona attacker who would run the length of the pitch just to bother the defenders. Despite his running decreasing, Suárez still got decent numbers under Valverde; enough to make everyone forget about the lonely Copa del Rey won the year before.

Luis Suárez has experienced a sharp decline, but this should not make us forget about all the memories cultivated | Photo by Laurence Griffiths via Getty Images

With Suárez and Messi given less defensive duties after Neymar’s exit, Barcelona still thrived under Valverde’s 4–4–2 and won the league with a large margin. Suárez got essential goals just like when he found the net at the Camp Nou in the 2018 El Clásico. After a double in Valverde’s first year, it’s still worth talking about what happened in Rome, where the players lost their hunger and Suárez, who didn’t run much, should have come off. Every player looked shattered physically, from Ivan Rakitić to Lionel Messi passing by Andrés Iniesta and especially Suárez. The Copa America winner was overused all season long, but he should have come off that night, and it was up to the coach to do that.

Putting that aside, Luis Suárez’s 2018/19 season showed the weaknesses of a tired and probably injured striker who couldn’t start every day, at least he shouldn’t have, but Valverde thought otherwise. Then came another decent campaign, where Suárez had his moments. These include his hat-trick in the Messi-less Clásico 5–1 win or his Man of the Match performance, along with Ousmane Dembélé, in the double confrontation in the Copa del Rey against the bitter rivals.

Still, what happened in May was unacceptable, and another clue to the overuse the players suffered while losing the hunger they had two years ago. They went to Liverpool’s Anfield for the return leg of the Champions League semi-finals after Suárez and Messi had scored three goals between themselves at home. This time, the players did have a better showing than in Rome. Still, the lack of finishing from some heavyweights of the squad led to Liverpool scoring four without a response from Messi, Suárez or anyone else.

Finally, his last course as a Barcelona player will probably be the least memorable as he was injured for four months in January. The team finished second in La Liga, crashed out of the Copa del Rey against Athletic Club in the quarters and went out at the same stage, this time in humiliating fashion, in the Champions League against Bayern Munich, with Suárez provoking David Alaba’s own goal with his presence after Jordi Alba’s pass and then scoring an unexpected but superb finish in Manuel Neuer’s bottom corner.

Even if Suárez’s story as a blaugrana went south in the last few months or years, he is still one of the most prominent club legends to have graced the pitch at the Camp Nou. The man even managed 198 goals for the club, making him the third-highest top scorer in the club’s history in front of club icons Josep Samitier or László Kubala.

Luis Suárez will be remembered as one of the best strikers in the club’s history and, in his prime, the best striker in the 2010s. He was astonishing wherever he played, and mostly at Barça, where he will always have a place in the future. The way some fans and the board have turned against him is deplorable and a lack of respect for such a legend who deserves respect, but the magical moments and memories will live on forever.